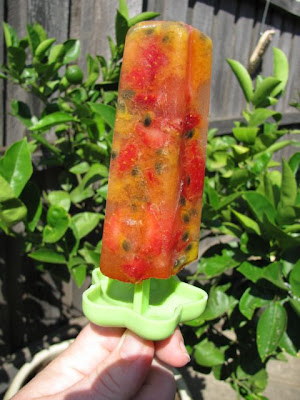 During the hot weather we had over the last few weeks, I had a yen to make icy poles (popsicles to Americans and iced lollies to Brits). It took me a while to find some moulds but finally I asked in a local homewares shop and found I had walked straight past the display at the entrance.

I hardly have icy poles these days but the hot weather has made me think they would be welome. We used to have them more when I was young. My mum made them sometimes but I remember them more when we were at the pool on hot summer days and kids would have brightly coloured 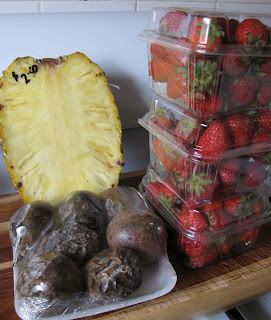 rings around their mouth from the dye in the commercial icy poles. Those were the days when we didn’t worry about too much sugar and artificial colouring!

On the same day that I bought my new moulds I found some cheap fruit in a local greengrocers. I got 3 punnets of strawberries, 7 passionfruit and half a pineapple for $5.50. What a bargain! It wasn’t the freshest of fruit but kept a few days in the fridge and the strawberries were small, sweet ones unlike some of those tasteless, large ones they sell in the supermarket.

I had my eyes on an icy pole recipe from The Australian Women’s Weekly Vegetarian Cooking. It said it made 12 icy poles but it barely made 6 for me. I presume the moulds are much bigger than they used to be. I would have topped mine up a little but wasn’t sure how much room I needed for the mixture to expand in the freezer. These are nice and healthy snacks that I have been enjoying even though it is not unbearably hot at the moment.

The rest of the fruit went into a fruit salad and a smoothie. The fruit salad is similar to this one. I have listed my ingredients used in the smoothie below because I have enjoyed it so much, although I 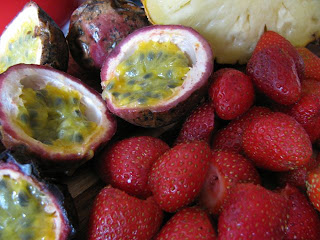 didn’t think to take a photo. It was delicious but be warned it is quite seedy and tart if you are not into that sort of thing.

Actually, it has occurred to me that a smoothie in my icy pole moulds might make a good frozen treat. My mum says she used to put cordial in the icy poles she made for us as kids. Enthused by my first attempt at icy poles, I have been interested in some of the interesting ideas around the web. If you don’t have your own moulds then La Tartine Gourmande suggests freezing the liquid in shot glasses with icy pole sticks in them or Ice Cream Ireland suggests freezing a banana with an icy pole stick in a in it (dipping in chocolate is optional but sounds delicious).

I am sending my icy poles to one of my favourite blog events, Heart of the Matter which is hosted by Michelle of The Accidental Scientist this month. The event is two years old and theme 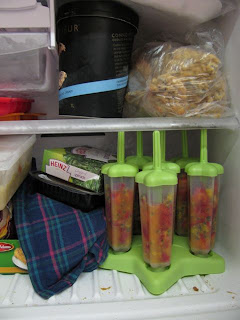 is finger food. I am never quite sure exactly what finger food is – I think it is snacks that can be eaten casually and often in company. And these icy poles definitely are the sort of heart-healthy food that this event encourages.

I was pleased to offer one of these to my mum during her visit yesterday (after all she has made a few of these for me in her time) but they would also make great party food. The box which my moulds came in shows that if you are entertaining, you can get a bucket of ice and plunge the icy poles into the ice! (On a practical note, you might also need a container of hot water to dunk the icy poles in to remove from the moulds.) Like all good finger food, these can be a little messy but fun!

Mix all ingredients in a bowl and spoon into icy pole moulds. Set in freezer overnight. To remove from mould, run under hot water. Serve frozen.

On the stereo:
All pigs must die: Death in June
Posted by Johanna GGG at 21:27