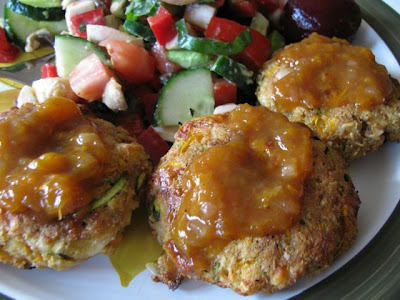 The heat has a way of draining energy. Just as the house took a while to cool down after a run of hot days last weekend, so did it take us a few days to get our energy back. I didn’t have a lot of inspiration for cooking and turned to my favourite tofu burgers that I have been making for years. It is relaxing to do something that feels comfortable and requires little concentration.

This is a recipe that is different every time I make it but the burgers last weekend were particularly good – light and tasty – so it seems a good time to post a version. Often I also add ground nuts to the mixture if I have some about but they are not essential. E liked them so much he asked if there were more, but this batch wasn’t a huge one.

I managed to effortlessly cook them to gold brown perfection. Ironic, isn’t it? When I made Tofu and Lemongrass Nuggets a few weeks back, I made a real effort to cook them properly in a frypan and they were a mosaic of burnt patches. These burgers were cooked under the grill 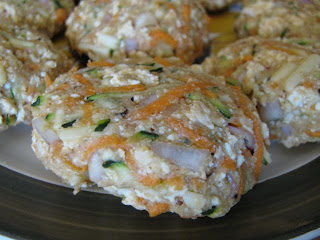 (broiler) with a bit of oil on them and left while I busied myself with other matters. They came out just right.

When they were cooked, I served them with a simple salad and we had them in front of the grand final of the Australian Tennis Open (Rafael Nadal vs Roger Federer). Unfortunately the game went so late that I missed the very ending but it was a nail-biter. I have said before that we don’t watch a lot of sport in our place so this was quite unusual. But enjoyable! It made me remember how much tennis was part of my childhood.

I was never a sporty child. I never liked team sports. When I started high school, I was one of about four girls in our class to never have played netball. I learnt other team sports but never played them regularly. Swimming and bike riding were part of my life but for relaxation or travel rather than in a competitive way (as is still the case today). Tennis was the exception. I played competition tennis for many years and was a terrible player. But I didn’t mind hitting a ball around.

One of my fondest memories of tennis was when the family took our racquets and balls up to the nearby Church of England tennis courts. These courts were suffering neglect that meant grass was growing out of the cracks. We just viewed it as an extra challenge because if the ball landed on a crack, there was no knowing which way it would go. It was always fun to see my mum and dad 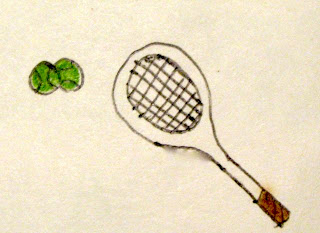 running around after the ball because it made them seem more youthful. We whacked the ball, missed it sometimes, had to fetch it when it went flying over the fence and had lots of laughs.

I also used to watch the Australian Open every year when it was played on grass at Kooyong before the new Melbourne Tennis Centre was built. Tennis stars were pin-ups in our house. As I started thinking about tennis, other memories began to surface:

- Driving to ‘away’ games on Saturdays in summer, which were played at tiny towns that were mere dots on the map.
- The Christmas that we were given tennis racquets. My sister remembers having a tantrum because she didn’t get the one she wanted. I remember being amused that my racquet had Chris Evert on it, although I think by then, she had married and become Chris Evert Lloyd. I loved my old wooden tennis racquet. (See the picture I drew of it when at school!)
- When one of the boys at tennis practice hit a ball back at the coach hard and fast and hit him in the nose. We all felt the coach’s pain.
- Never playing in the rain because it would warp the strings of the tennis racquets (I think this idea might have come from a time when they were made of catgut).
- Wearing Dunlop Volley sneakers (trainers, sandshoes) because we had to have white soled shoes on the tennis courts.
- Spending hours puzzling over what the logo on Pat Cash’s t-shirt represented. I guess sponsors were more subtle in those days.

It is years since I have picked up a racquet and I don’t watch much tennis on the telly any more but every now and again, I don’t mind watching the world’s best and remembering more innocent times when I aspired just to hit the ball over the net.

So maybe you will understand why I enjoy these tofu burgers which are low fuss, low energy and taste good. I am not sure you will see them starring on Iron Chef but that is just fine with me. These burgers are perfect for an easy life.

Tofu, Carrot and Zucchini Burgers
Serves 4 with side dish

Mix all ingredients together in a bowl. Use your hands to take handfuls and shape into about 12 flattish burgers. (Your hands can get a bit mucky but a little water on your hands will help prevent this.) Place burgers under the grill and brush or spray with oil. Grill for about 10 minutes on each side at medium–low heat til golden brown. Serve with salad and chutney.

On the stereo:
Memoria: Leger des heils
Posted by Johanna GGG at 23:12