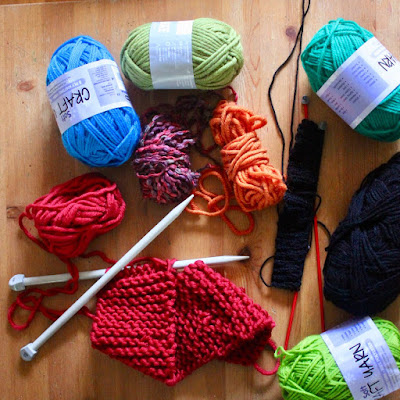 The July school holidays end today on a wintery wet windy day.  It seems to have been a quite holidays here with lots of rest, tv, knitting and drawing.  But upon reflection we were out quite a lot with lots of meals out and some fun times.

I haven't knitted for years but as a student I loved to knit and made myself a few jumpers.  Then lately I decided to knit a patch for a jumper that was falling apart.  I decided to knit more.  A friend gave me some unused wool.  Firstly I made a beanie and decided to make more.  We have been watching Line of Duty on Netflix late at night when I have made some good progress in my knitting (amazing albeit disturbing police drama).  Meanwhile I have shown Sylvia how to knit so she can make a scarf. 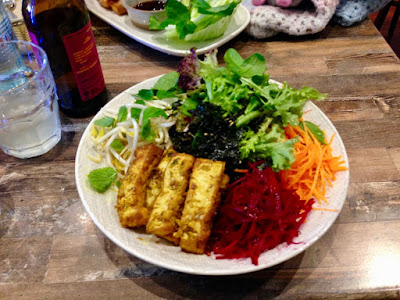 At the start of the holidays we went to Olivia Spring cafe (637 Mt Alexander Rd, Moonee Ponds).  Sylvia enjoyed wrapping her spring rolls in lettuce and mint leaves.  I had the turmeric noodles with lemongrass tofu, seaweed crisps and heaps of salad.  It was quite spicy for my chilli-avoiding palate but very nice.  It's a shame so much of the menu has mock meat but it is still a nice vegan place to visit. 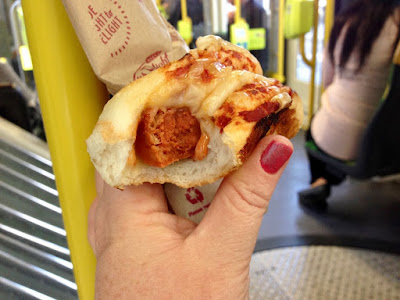 Sylvia had a week of playdates and staying at my parents before I was off work for a week.  However she did find time to paint my nails.  I can't remember the last time I painted my nails.  Probably sometimes before I stopped knitting.  The photo here is of a vegan sauce in a bun covered with cheese from Bakers Delight.  It was still warm out of the oven and a delicious breakfast while I was out of routine with no child at home. 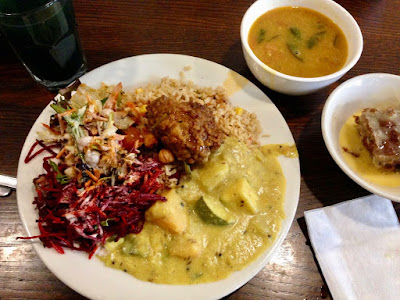 Actually I had to change a day from my week off to the first week.  It meant I spent the first day of my holiday week at work while Sylvia went to the Cat Cafe with E.  On my day off in the first week while Sylvia was away, I met up with a friend Jane at Gopals.  It is a long time since I have been there but it hasn't changed much.  E and I went a lot before Sylvia was born and it was a challenge to take a pram up the stairs.

Jane and I were over ambitious with ordering the Feast menu for about $12.  It was indeed a feast with lentil soup, kofta, korma curry, 2 salads and a sticky date pudding with custard (out of a squeezy bottle).  I also had a dark green apple and wheatgrass juice which I enjoyed.  It is a great place for cheap hippie food and it is all vegetarian. 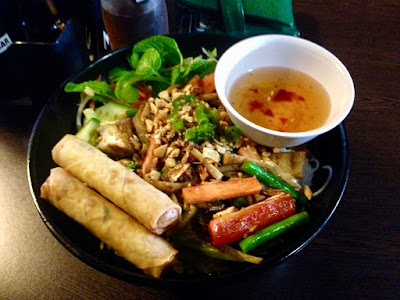 My workplace is a fine place for good food.  We had a few farewell lunches before I went on leave.  I really loved the pasta and lentil soup at TiAmo.  I have been to TiAmos many times but this is the best meal I have had there (although maybe it was just perfect because I had been feeling unwell).

The above dish is the Bun Chay (tofu and vegetables on vermicelli with spring rolls $14.50) from Dumpling 88 (88 Grattan Street, Carlton).  It was delicious and so were the vegetarian dumplings.  I figure that this place much be well regarded as we ran into another group from our workplace when we were there. 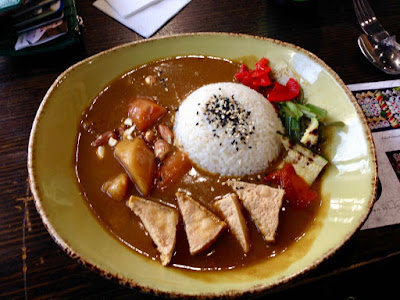 I went to Purple Peanuts with Sylvia after she got back from my parents' place.  It does such nice Japanese food.  I bought a onigiri rice ball which was lovely but not appreciated by Sylvia.  For myself I had the Japanese vegetable curry.  It was fantastic.  The tofu was nice and crispy.  The rice, the almonds, pickled veg, carrot, potato and rice were delicious with lots of sauce that was spicier than other curry don bowls I have had. 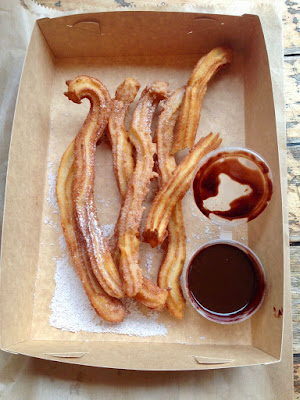 My dad organised for Sylvia and her cousins to go ice skating in St Kilda.  I refused to ice skate after a bad experience years ago.  Sylvia managed to get around the rink.  My brother Paul and niece Ella had a great time on the ice and were reluctant to leave.  Sylvia and I shared a cheese and tomato toastie at a cafe in Acland Street.  She now keeps craving cheese and tomato toasties.  Then we went to the South Melbourne market for churros with chocolate.  It was a cold day and the warm crispy churros were so so good. 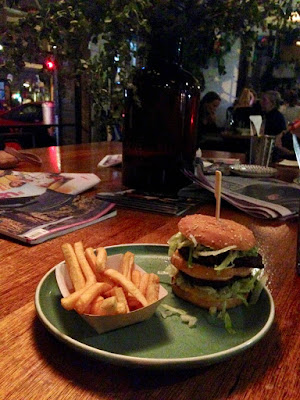 I went to the Vegie Bar in Fitzroy with Faye for dinner on a cold wet weekday night.  The sort of night I expect no one else to want to go out. But it was packed and we could only find a couple of seats on the communal table.  We both had the Better than a Big Mac: "Two house-made 100% no-beef patties, special sauce, iceberg lettuce, vegan cheese, pickles & onion in a three-part brioche bun. Served with golden potato fries. $18"  It wasn't quite as amazing as my first time.  The burger patties seemed slightly mushier with less structure.  But it was so fantastic.  I really love a burger I can pick up and eat, and it does imitate the iconic Big Mac of my teenage years.  We also had wonderful crispy rice balls with satay sauce.  But it was too filling for us to have time for dessert. 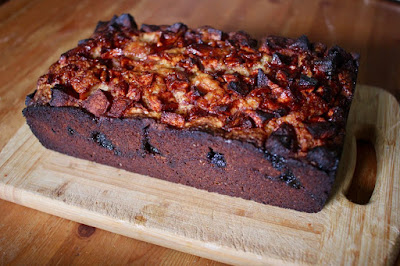 Being on leave did not give all the time for cooking and blogging that I had hoped.  However I did make two things I had been wanting to try for ages.  I made Smitten Kitchen's Mom's Apple Cake.  It uses an impressive 6 apples and bakes for 1 1/2 hours.  I didn't have a big enough ring tin so I used two loaf tins, and I used lemon juice instead of orange juice.  It was absolutely delicious with a layer of soft apple in the middle and on top but it was rather overbaked around the edges.  My mum says the shape of my tin was to blame.  But it is worth trying again (perhaps with a double lined tin).  I also  made a nut roast for a roast dinner.  More about that later. 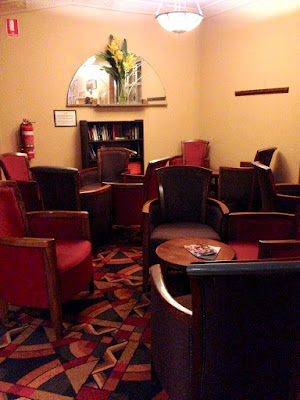 We enjoyed seeing Yesterday at the Westgarth Cinema because we had some vouchers left from my birthday.  Firstly it was a pleasure to go to the old Valhalla Cinema where I used to go as a student (and my dad went weekly when he was a kid).

With regards to the film, I feel we (and Justine Clarke) have done a good job in Sylvia's musical education that she is quite familiar with the Beatles.  The film is about a struggling musician who wakes from an accident to find he is the only person in the world who remembers the Beatles.  There is a theme about fame and how it changes him.  But the Beatles huge influence on music/fashion/cultural history is too big for the film to really grapple with.  It does raise an interesting idea to ponder. 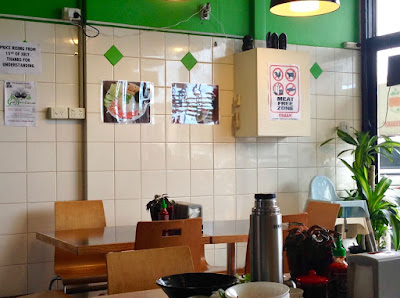 We had a day where Sylvia had a haircut, we went to Vegan 365, had cake next door at True North and then went for a swim.  I have wanted to go to Vegan 365, a Vietnamese cafe in Coburg that opened earlier this year.  Inside are tiled walls, plants on table, laminated pictures of the meals and vegan posters (stay calm and go vegan).  It is clean and neat.  Upon arrival we were given a thermos of green tea. 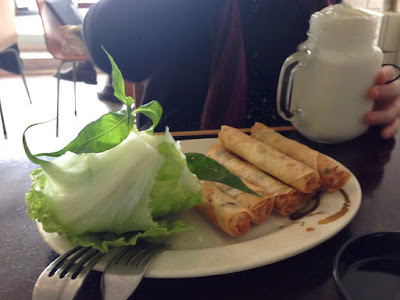 Sylvia ordered spring rolls which came with lettuce and Vietnamese mint $9.  They were piping hot and very good.  I asked for soy sauce instead of the vegan fish sauce.  The staff member nodded and brought her fish sauce without chilli.  Sylvia was disappointed she could not push out the middle easily.  She enjoyed her custard apple smoothie ($6.50) because it tasted of coconut milk and was sweet.  Whereas I enjoyed the spring rolls far more than her drink. 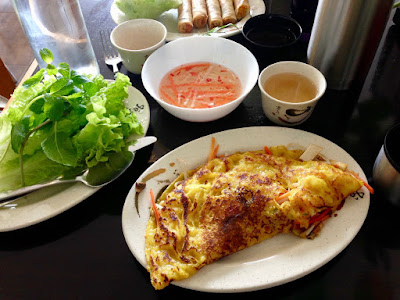 I think I would prefer Vegan 365 in summer.  The dish I really wanted to try is the Vermicelli Dry Noodles with the noodles, tofu, spring rolls and salad.  But it was just too cold and wet.  I needed something hotter.  The noodle soups and curry had mock meat in them.  So I went with the Pancakes (tofu, varieties of mushroom, carrot and bean sprouts, served with Vietnamese mint, lettuce and vegan fish sauce $12.80).  It was really nice, though I not familiar enough with it to know how to eat it neatly with lettuce and mint.  Like Sylvia I was not a huge fan of the fish sauce, something that I am not familiar with.

I would return to try the vermicelli noodle dish.  Next time though I will take cash as the only other option was a bank transfer and mine was playing up so I had to go and get cash to bring back. 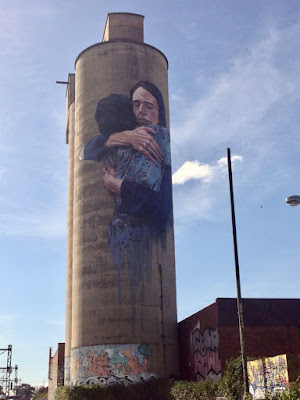 Finally I forgot my phone today when we had a ride down the Upfield Bike track so I have a photo of the wonderful street art near Tinning Street from a sunnier day.  It is such a beautiful image of Jacinda Adern comforting a community member after the Christchurch bombing earlier in the year.  If only we had more images of compassion throughout the city.  We were on our bikes to go to Barkly Square for shopping but stopped at Lord of the Fries for a burger and hot dog.  Sylvia got out her drawing book and I got out my knitting and we decided we would make fine crazy cat ladies!