If there is one thing that I can be sure of with a Christmas in July lunch, it is leftovers!  I went overboard in cooking peas.  And I had planned to roast eggplant (aubergine) and red capsicum (pepper) for the meal but never did.  I fancied rice and looked up eggplant pilafs online.  Then at home I decided pearl or Israeli couscous would be quicker and use up the end of a packet.  I had limes and mint to use so this just worked in making my way through my pantry.  And it tasted really good, once I remembered to run out to the tree for one of the last limes of the season to squeeze on the dish. 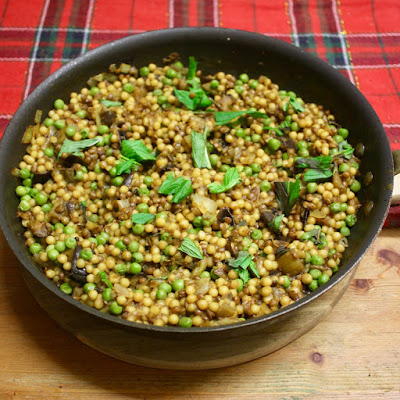 There was a lot of pilaf so we have had leftovers and work lunches.  I really loved it but I think it needs something else with it.  Perhaps a salad.  I am still undecided whether it is a side dish that needs a salad, or a side dish to accompany a central dish.  Whichever, I found it very comforting soft food, though the couscous is slightly chewy so it is not just mush.

Now I have a few random moments to share:

I am sending this pilaf to Shaheen at Allotment 2 Kitchen who is hosting Eat Your Greens with The VegHog.

Fry eggplant in a large frypan over medium high for 10-20 minutes until soft and starting to brown at the edges.  Push eggplant to the side of the frypan and fry onion for 5-10 minutes until golden.  Stir in garlic and spices for a minute.  Add boiling water, stock powder, couscous, lentils and seasoning (just a pinch of each salt and pepper for me).  Bring to the boil and simmer for about 10 minutes or until most of the liquid is absorbed by the couscous and it is chewy and cooked.  Stir in peas for a minute or two or until warmed.  Stir through the lime juice and serve.

NOTES: my peas were already cooked but frozen ones don't take long to warm through.  I think this would work well with rice but would need to cook longer and might need more water (or soaking).

On the Stereo:
Greatest Hits compilation album: Queen
Posted by Johanna GGG at 22:51