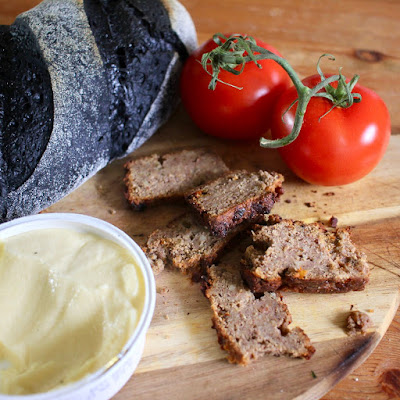 While some people might associate turkey with Christmas, I think nut roast!  But nut roasts are also a winter comfort food.  I hadn't made one for ages and the nuts were piling in the pantry.  So I finally got around to making one a few weekends ago.  Then I noticed it was only a week before our Christmas in July lunch.  I was delighted to find a way to make this part of the planning. 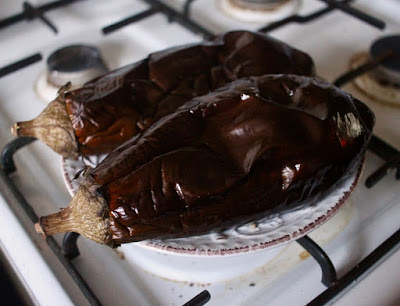 I don't tend to cook with aubergines or eggplants a lot.  It is not that I don't like them.  But I find them a bit of a challenge because they must be cooked well or they are horrid.  And E is not a fan of them.  I had wanted to try them in nut roast for a while but hadn't found a time when the recipe and the energy came together.  Mary Berry had a recipe where you use the skins to line the nut roast.  It did not appeal.

I was more attracted to the Happy Foodie nut roast and decided to try it.  Once I started to make it, I found that it was actually more work than I had planned.  Halfway through I decided to ditch the idea of simmering vegetables and seasoning for about 20 minutes and I just chucked it all in the mixing bowl.  I love a nut roast that is just a matter of mixing and baking.  But fried onions always add some nice flavour. 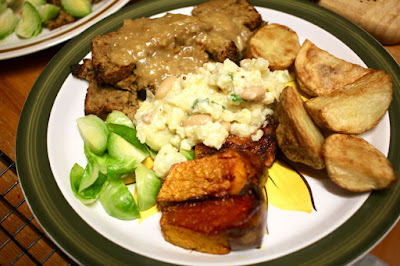 There was so much nut roast that I found I had two loaves.  Which meant I could freeze one for the Christmas in July lunch.  Perfect.  After spending quite some time on this nut roast (we ate at about 8am which is pretty late for Sylvia even though it wasn't so unusual before she was born) I was pleased that I had already done this work for my weekend of Christmas in July.

We had a wonderful roast dinner with the freshly baked nut roast.  I made roast dinners like my mum did but mine are vegetarian.  They take a bit longer because I made my nut roast.  My mum would just put a chunk of meat in to roast.  Even so it takes me a lot longer than her.

The roast dinner was nut roast, gravy, roast potato, roast pumpkin, brussel sprouts and cauliflower cheese.  I had made my cauliflower cheese with a really cheese sauce the night before.  Maybe the cheese sauce was still too thin.  I decided to add cannelini beans.  This was not great.  The next day after the roast dinner I blended it.  So much better.  Itt was really delicious.  I have plans to have another go at it and post it as a dip.  When I get a bit of time... 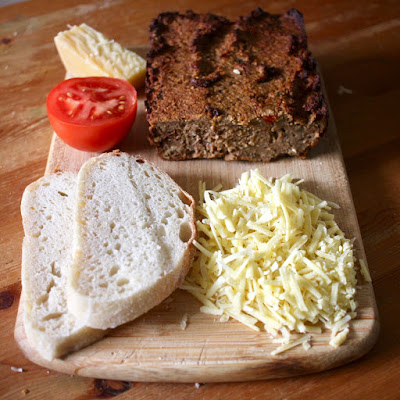 The wonderful thing about nut roast is that there are always leftovers.  There is nothing like thinly sliced cold nut roast on fresh bread with some cheese and tomato or in a salad sandwich.  I guess this might be because I grew up with cold meat in sandwiches.  My mum used leftover meat in the same way I used leftover nut roast.  Of course we never ate it with the charcoal bread in the top photo. 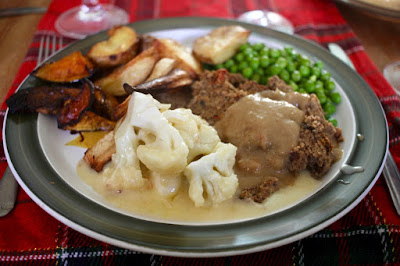 The second loaf that I frozen in foil and then defrosted and warmed up for the Christmas in July dinner was really delicious.  It is a treat to have it with lots of gravy that I make from scratch.  Nut roast does not have to be the centre of a roast dinner, but it works so well with the roast vegies, soft cooked greens and a generous ladle of gravy made from scratch. 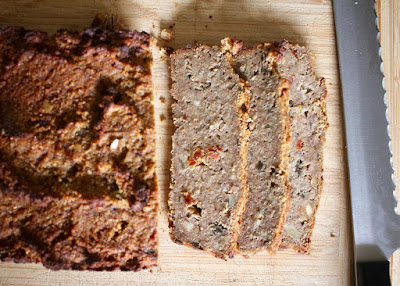 The second loaf yielded a decent amount of leftovers to be sliced and warmed up with the leftover vegies or eaten in cold slices on bread or just a la Nigella Lawson at the fridge door when I needed a snack.  If I had been in less of a hurry I would have remembered to throw some sultanas (soaked or unsoaked) in when I ground the nuts and to put in lots of parsley.  The sundried tomatoes made some nice red specks and the green would have gone with nicely with these in a festive loaf.  This is definitely a nut roast to make when there is time to potter in the kitchen.  Served with the festive trimmings, this is bound to impress.

Rub aubergines with oil and bake at 220 C for 45 minutes or until soft when you push a skewer into them.  Cool, peel, discard peel and chop flesh finely.

While aubergines are baking/cooling, fry onion in 1-2 tsp of vegetable oil for about 5 minutes over medium high heat or until browned.  Stir in garlic, herbs and cinnamon.

Grind together nuts and sesame seeds (and sultanas if using) until coarsely ground.

Divide mixture between 2 greased and lined loaf tins.  Bake at 180 C for about 30-40 minutes.  Can be frozen wrapped in foil.  To defrost, take out of fridge the day before you want to use and let come to room temperature before warming in the oven wrapped in foil for about 20-30 minutes.

NOTES: The aubergine cooled while I put everything else together but I started roasting them a bit earlier.

On the Stereo:
An Aussie Christmas
Posted by Johanna GGG at 18:19