Christmas in July lunch and fruit and marshmallow skewers 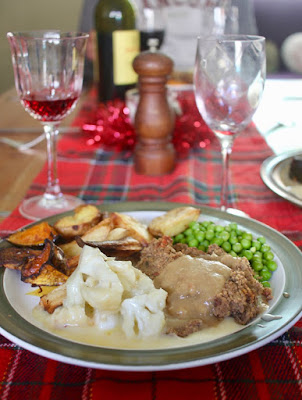 Christmas in July came around quickly this year.  By that I mean I was not prepared at all but we could not let July pass without a festive feast.  Despite it being too sunny to feel that cosy winter feeling, it was lovely to have our friends over.  As always, I love Christmas in July for festivities that eschew commercialism in favour of good food and good company. 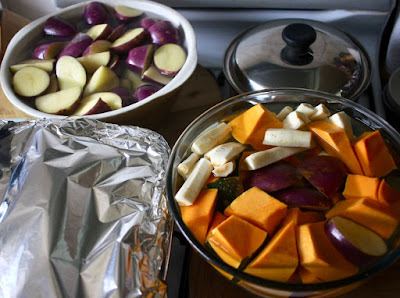 I hadn't had much energy for preparation but Sylvia and I had a bit of discussion and came up with a menu on the Friday before lunch on Sunday.  As well as a menu we also have to have a bit of a plan of attack.  Sylvia had a birthday party on Saturday but we got shopping done beforehand (using my list from last year), I ducked home for some tidying during the party, and when we got home we baked biscuits and made bark and then I cooked gravy and chopped vegetables.  We spent all Sunday morning preparing the food and the house. 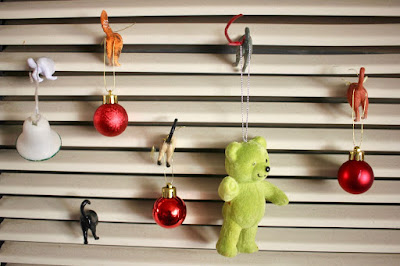 Tidying the house was quite rudimentary.  So were the decorations.  Sylvia got out as many as she could in limited time.  I liked this collection of a few decorations hanging from magnetic cats tails on our old heater.  It was a busy morning but we had dinner ready just about by the time everyone arrived.

I was reflecting that I have made quite a lot of Christmas dinners without ever making one on Christmas day.  I would have to be far more organised to do dinner on Christmas day.  Chopping and soaking vegies for roasting overnight always helps.  I made the nut roast a week before and froze it.  And this year I bought a bag of frozen peas rather than chopping brussels sprouts.  I wasn't sure about making cauliflower cheese in advance but I did decide to do a whole cauliflower because it seemed easier. 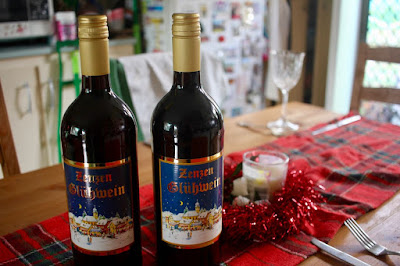 Naomi brought along wine and a cheese platter that included a spicy eggplant dip.  Kerin brought along mulled wine and a rice krispie roulade.  It was great to have the cheese platter and wine for everyone to chat when they arrived (including one unexpected guest from the airport where they had not let him board his international flight because his passport had been one week shy of the required 6 months).  I had waited for their arrival to warm up all the components of the meal in the oven (other than the gravy in the microwave).  I even channeled my inner domestic goddess and warmed some plates in the grill section of the oven. 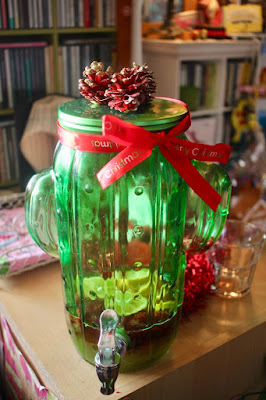 Sylvia had made Kids punch.  It was pretty similar to the one she made for her birthday but it used ginger ale rather than raspberry lemonade.  I liked that much better.  She put lemon slices, frozen raspberries and mint leaves into the mix.  It worked very well in our cactus drink dispenser.  I was worried about it being lukewarm, so I froze water in a bottle but had to melt it quite a bit to get it out.  I think it helped.  And drinks don't need to be as cold in winter as in summer. 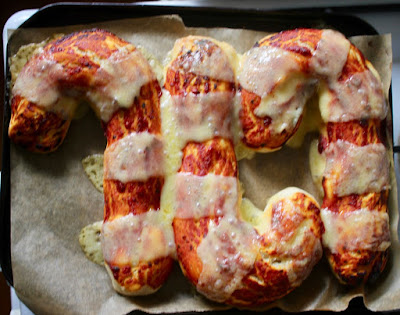 As always I served the kids first.  They have been coming to these lunches for 5 years now and seem so much more grown up.  But they still like to eat their pizza quickly, attack the desserts and then run outside and play.  We came out later and found our driveway had roads and parking spaces chalked up for them to ride their bikes, scooters, and roller blades around.  Whereas the adults are happy to take their time over dinner and dessert. 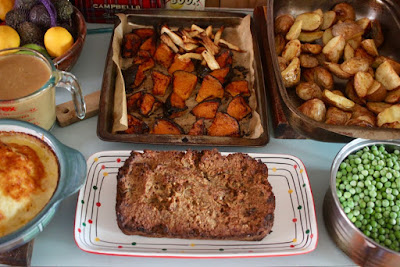 I love doing a roast dinner for the Christmas in July lunch because my mum always made roast dinners for Christmas.  It is not quite as easy for me as for my mum but it is still something I don't need to think about much and it is my comfort food.  I also like the opportunity to use some nice cookware and was annoyed I forgot to use my gravy boat, which doesn't make many appearances these days. 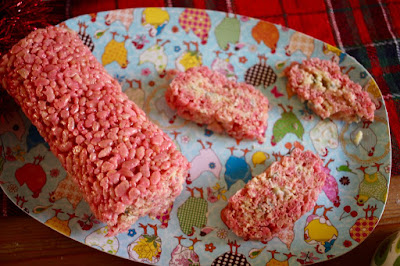 Here is the rice krispie roulade with a white chocolate filling.  These are not the best pictures of the slices but it was what was there when I got a chance to photograph it.   I enjoyed it but it was toothachingly sweet.  This is the sort of slice that keeps dentists in fancy holidays! 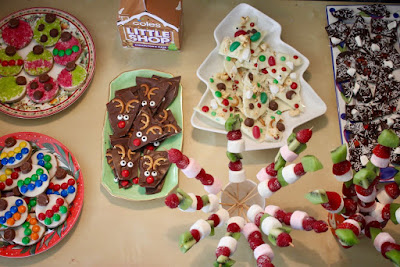 Sylvia set up a dessert table with bauble biscuits, three types of chocolate bark and her festive fruit and marshmallow skewers.  They were made with strawberries or raspberries, kiwi fruit and white marshmallows (until they ran out and she used pink marshmallows).  There were options of two berries because one kid is allergic to strawberries.  Sylvia seemed quite pleased when the kid's sister said, you can't have them because they have strawberries, and Sylvia was able to point out the raspberry option.

By the way, I had good intentions of finding vegan marshmallows but they weren't at the health food shop I went out of my way to visit (just like all my favourite stalls weren't at the farmers market on the weekend). 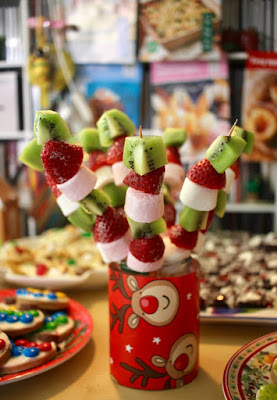 So that is Christmas in July over for another year.  The house is a bit tidier.  (Kudos to guests who wash the dishes before leaving.)  The fridge has quite a few tubs of leftovers that are going into meals this week (more recipes here soon).  We have an embarrassing amount of lollies leftover from the chocolate bark.  I always have heaps of gravy leftover.  And now it is only 5 months until we do Christmas all over again.