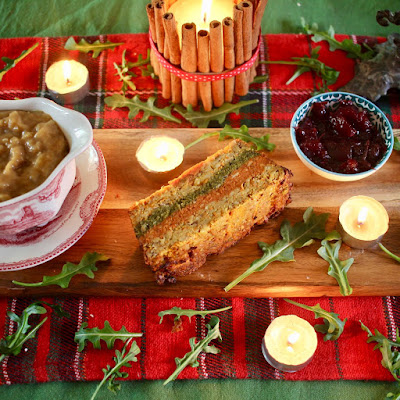 We held a Christmas in July lunch on the weekend for a few friends.  It is a cosy way to celebrate a long cold winter.  Fortunately it came at the end of a week of holidays, so I had some time and energy to prepare.  Sylvia loves helping with the planning.  It is our opportunity to make some fun Christmas food without all the stress of the festive season. 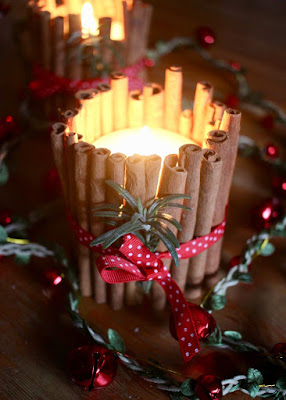 Planning in earnest started on thursday two days before when we went to the Queen Vic Market to shop for food for the dinner.  Sylvia had a friend over so it seemed a fun outing (and delicious too - who can resist the hot jam doughnuts!)  She was amazed that cinnamon came in sticks.

When we got home I was perplexed at trying to work out how to get the cinnamon sticks around a vanilla candle.  Sylvia and I worked out I should put thick sticky tape on the table, line up cinnamon sticks on it and roll it around the candle.  When I looked more online, I found good advice about using a rubber band to keep the sticks around the candle.  The candles looked very festive, but next time I will put twine as well as ribbon and try to remember to add the rosemary or greenery before everyone arrived. 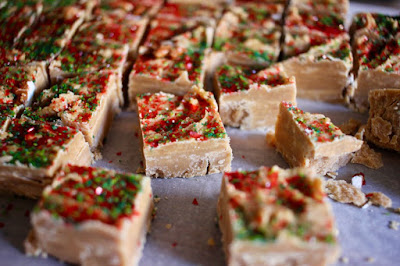 I made caramel fudge on Thursday.  It was pretty quick to make.  I left it in the fridge overnight and cut it straight from the fridge.  This meant it was rather brittle and there were lots of fragments.  Next time I will cut it when room temperature.  Sylvia organised red and green sprinkles to put on top which looked quite festive. 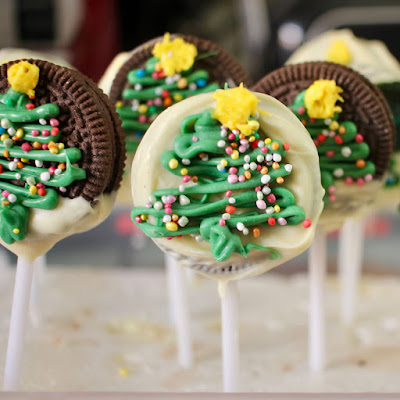 We also started on the oreo pops on Thursday.  Sylvia had another play date on Friday but we had a little time in the morning to finish these.  I have posted separately about these Oreo Christmas Tree Pops.  They were Sylvia's idea and were just served to the kids.  A great success.

Sylvia brought cupcakes home from her playdate which she thought might be good for Christmas in July.  I convinced her to put them in the freezer for school lunches because we had enough sweet food. 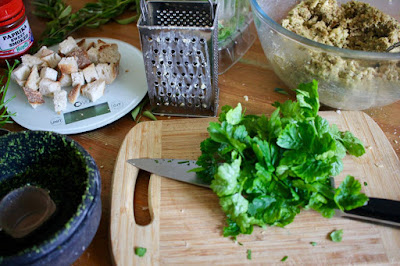 Once Sylvia was gone to her friend's place on Friday I made the nut roast.  I planned to make it a simple smoked cheese and carrot nut roast that I had made before.  Then I threw some parsley in with the breadcrumbs in the blender.  They looked so good I decided to make a green layer.  And why not a red layer too! 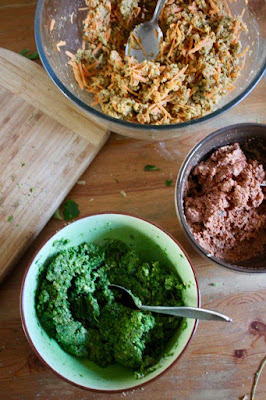 E was given a box of fruit and veg the previous weekend with a lot of herbs.  The Italian parsley was easy to recognise but the others stumped me.  After using the parsley, I wanted to put the rest in the middle layer.  So I put out a photo on Facebook in desperation.  After I had thrown them all in, I got some helpful advice that most of the herbs left were indeed a different variety of parsley and the long thin leaves were curry leaves.  If I had been more on the ball I would have recognised the curry leaves and not added them.  The herb layer was very herby and the tomato layer was very tomatoey but in the whole nut roast with gravy they worked. 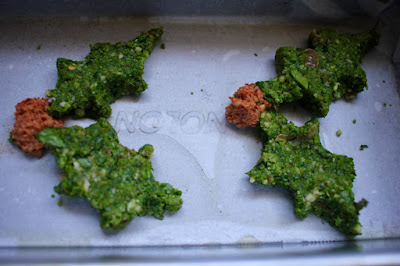 And the layers were not quite enough for me.  I decided to make some holly leaves to decorate the loaf.  I did these on the bottom of the tin so it would be on top when I turned it out.  The green layer was quite stiff and easy to mould.  The red layer was a lot softer and more difficult to shape.

I also made gravy on Friday evening, made lemonade with excess citrus fruit, roasted some eggplant and red capsicum, and chopped up potatoes, parsnip, pumpkin and sweet potato to be left in large bowls of water until they were roasted the next day.  Below is my vegie shopping list. (I had meant to also roast garlic but forgot it.)We had some leftovers of all the vegies.  I love leftovers and was a bit sad that there were not many leftovers.  Just enough to last us dinner that night and lunch the next day.  After that there was only a good cup of gravy and a stub of nut roast. 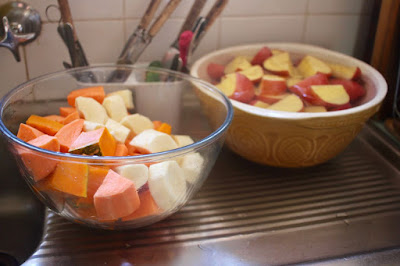 Mulled wine and home made lemonade (made by K) 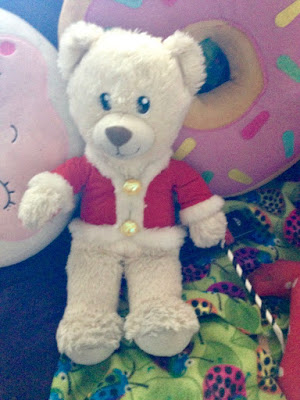 I had good intentions of tidying the house but didn't do much until Saturday morning before everyone arrived.  It is so much more fun to cook!  First thing Saturday morning, Sylvia and I rode to the shops for olive oil before making candy cane pizza and roasting vegies.  It was the usual rush but the house looked as neat as it gets by the time everyone had arrived.

I felt a bit behind because we were still making the Christmas tree of fruit when guests arrived.  I will write more about the fruity Christmas tree.  I also had not set the tables and did not have enough time for many photos!  Sylvia looked the party with a santa jacket on that we worked out we had bought for her in Scotland when she was 3 years old (almost 6 years ago).  Her bear also squeezed into an old santa jacket. 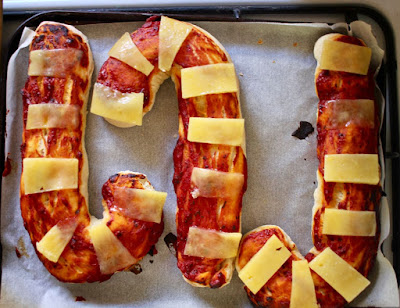 I had the candy cane pizza ready to heat up and this was the first to be served.  It is for the kids who all seem to eat pizza and want to eat and play.  This year marked a milestone.  Other years I have seated them around the little red Ikea kids table.  This year I decided the kids were getting too big for kiddie chairs.  We cleaned up a green table from the backyard and put a nice table cloth on it and some folding chairs around it. The kids had finished eating by the time I served the adults. 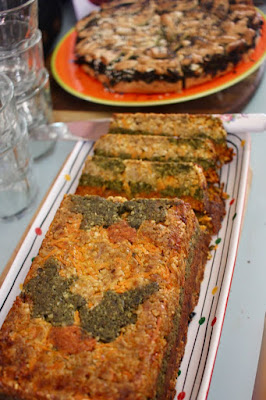 I would have liked more time to prepare, especially as that fruit Christmas tree took ages.  But by the time everyone arrived, everything was cooked.  All I had to do with heat everything up.  Then I discovered that my oven had gone out, which put me a bit out.  Everyone was happy to have some mulled wine while they waited.  But I eventually had it ready for everyone to serve themselves before taking a seat.  You can see the holly on the nut roast in the above photo. 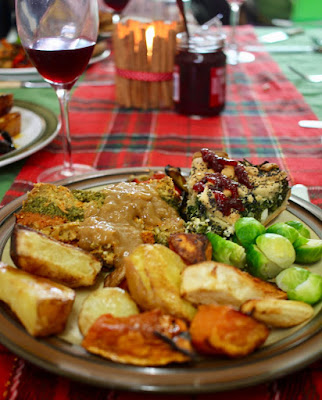 Here is my rather full plate.  I love a good roast dinner and then was most satisfying.  However it was a little cooler than I had planned.  I don't make lots of meals where lots of dishes need to be served at one and can still find that a struggle to juggle it all. 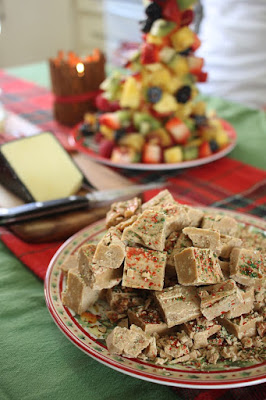 Sylvia had told me that when the fudge appeared there would be a stampede of kids.  In fact we gave the kids the oreo christmas tree pops and then they were happy to play outside.  So by the time I served the fudge, they were nowhere to be seen but I think they did sample some of it.  The fruit Christmas tree was quite popular with them. 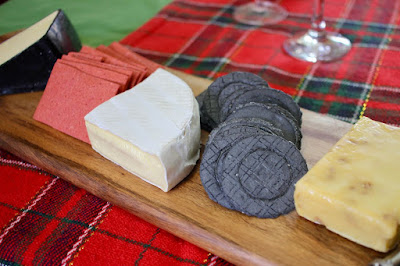 I also served cheddar cheese, toffee cheese, camembert, beetroot lavosh crackers and charcoal crackers.  I do love to graze on dessert while chatting about stuff like the plastic bag ban, the flu and piano lessons.  However later, I reflected that the dessert would be perfect for a summer Christmas dinner.  Ironic really, given that one of the reasons to celebrate Christmas in July is to have a cosy winter feast when the weather is more suited to stodgy rich festive food. 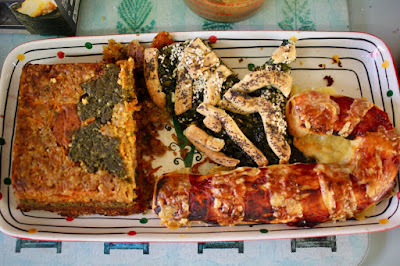 Having said that, there was a good amount of stodgy festive food leftover once everyone had helped with the dishes and left.  It is always so relaxing to rest after hosting a lunch and just nibble on leftovers rather than a proper tea.  Even nicer when surrounded by fruit and flowers. 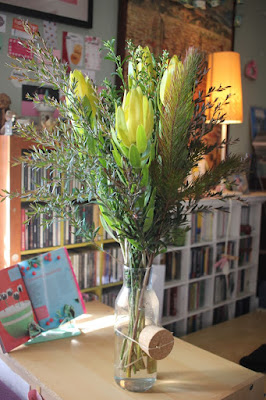 The nut roast was a success so I am sharing what I did.  It is not a nut roast to make quickly, but it looks quite impressive for a special meal.  Perhaps I will try this again when Christmas comes around.  Yes, one of the nicer things about Christmas in July is that now it is only 5 months until Christmas in December!

I am sending this nut roast to Baking Crumbs.

Mix hot water and vegemite and set aside. Mix nuts, cheese, breadcrumbs, caramelised onions, mustard paprika and seasoning in a large mixing bowl.  Stir in vegemite water mixture.  [Do not stir in grated carrots until you have made the fillings.]

Make the tomato filling by mixing 1/4 cup of nut mixture with the cashew cream and smoked paprika.  Then mix in the breadcrumbs.

Finally mix the grated carrot with the rest of the nut mixture.

Bake for 45 minutes or until cooked around the edges.  Wait at least 10 minutes before turning out onto a serving tray.  The roast will slice well if you cool it and then reheat it on the serving tray.
If you eat it straight away it will probably be less neat to slice.

NOTES: I used cashews and a few almonds but other nuts would work here.  I used dairy cheese this time but in the recipe I based the recipe on, I used vegan cheese,   I would have used more cashew cream if I had had it for the green filling because it was so dense but it actually turned out soft once it cooked.  If you want more contrast with the layers, use a plainer version of the nut roast without carrot and cheese.  I have made a few variations of this recipe (adapted from the the Vegan Society) and it works every time.  Other festive herbs such as sage, rosemary and thyme would work here.  I also added a handful of curry leaves to the green layer but am not sure I would do it again.

On the Stereo:
The Best Aussie Christmas: Greg Doolan
Posted by Johanna GGG at 23:12