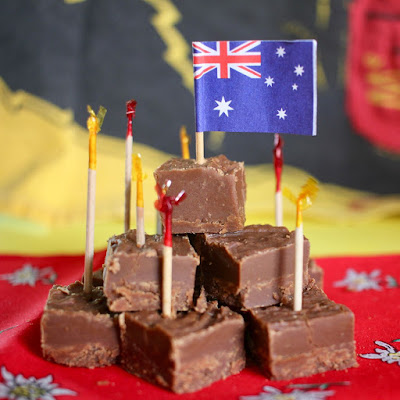 We recently had an international visitor who offered to bake a German apple cake for our group.  So I invited him to one of our regular morning teas.  It was such a lovely gesture to bring the cake that I decided to make something quite uniquely Australian for him: vegemite fudge.

I was inspired by the caramel fudge I made for our Christmas in July lunch, which was so sweet I thought it could do with some salt.  Then I thought I could add Vegemite.  Then I didn't have white chocolate so I added dark choc chips instead.  I was very pleased with the outcome. 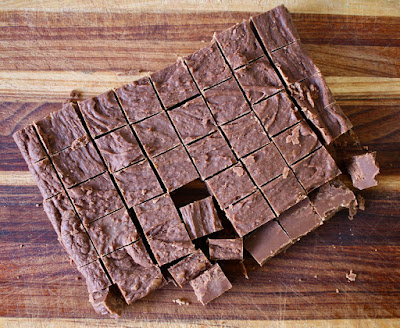 We had a really nice morning tea.  The German apple cake with lots of ice cream and cream was wonderful.  Others brought in savoury buns and Japanese cheesecake so it was quite a feast.  While our visitor and his wife were happy to taste the fudge, some of the other internationals I work with were more wary.  I argued that this was an easier way to try Vegemite than spreading it on toast.  Here are a few of the reactions to the fudge:

I am confused.  It tastes like breakfast but it tastes like dessert.
What is Vegemite?
It is a nice balance of sweet and salty
Vegemite?  No wonder it tasted so strong.
It doesn't taste of Vegemite. 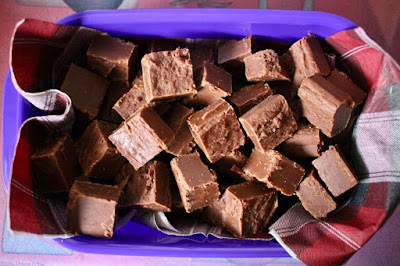 For the skeptics, let me explain.  Our iconic dark salty Vegemite gives a depth of flavour: a little bit umami and a salty balance to the sweet fudge.  If you are not Australian, I hasten to add that adding Vegemite to fudge is not common.  I am possibly one of the only bloggers to have posted two Vegemite fudge recipes.  Yes, this is not my first go at vegemite fudge.  In fact I think it could become quite common in this household.  I rather like it!

Melt butter in a large saucepan.  Add brown sugar, golden syrup, vegemite and condensed milk.  Bring to the boil over a medium heat.  Reduce to a low heat and cook for 10 minutes, stirring constantly.

Remove from heat and add chocolate, stirring until smooth.  Pour into prepared tin immediately and spread evenly with the back of a spoon.

Cool to room temperature for at least 30 minutes.  Once set, cut into small pieces with a clean hot knife (I had to clean my knife under hot water a few times while cutting up the fudge).

On the Stereo:
Absent Friends: The Divine Comedy
Posted by Johanna GGG at 23:03