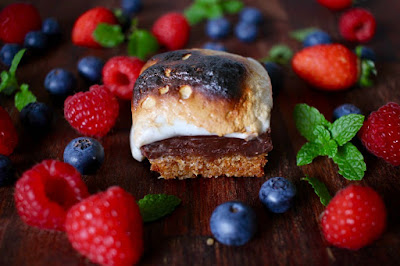 I am not a huge fan of marshmallow but have a daughter who is.  So we recently experimented with making a batch of vegan marshmallow.  The texture was pretty good but there was a lot of it.  So I made graham crackers to try s'mores, the fabled American childhood treat.  I still find s'mores on the campfire a mystery.  When I was a kid, we just stuck marshmallows on a stick and melted them over the campfire.  Anyway, I forgot the baking powder in the graham crackers so I blitzed them and made a slice.  Americans call them bars but I always cut them into squares so I stick with the Aussie terminology of "slice". 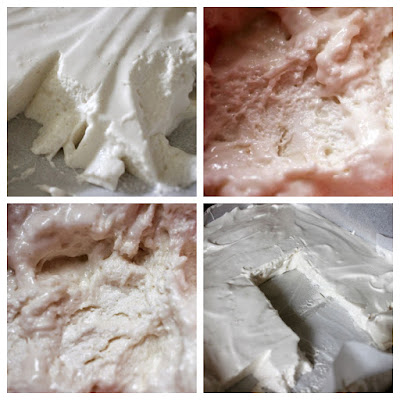 Here are so close ups of the marshmallow.  I followed Vegan Dad's recipe using aquafaba and stabilisers such as xanthum gum and agar agar.  We could cut it into a square in the first day or two.  After almost a week it was good to eat but too soft to have much structure.

It was a rare moment to get out my candy thermometer, which always makes me nervous.  But beating the AF and drizzling in sugar syrup was not too hard.  The one instruction that seemed odd was to beat the sugar syrup into the AF until the mixture was room temperature.  I had to stop long before then as the mixture kept creeping up the electric beaters and threatening to crawl inside the mechanism. 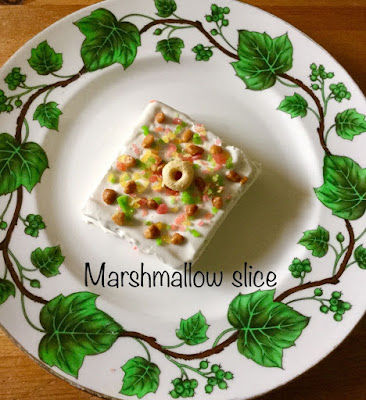 Sylvia was pretty excited by the marshmallow but found it very sweet.  She managed to cut a neat square, sprinkle it with popping candy, caramel chips and a cheerio and send me a fine, edited photo from her ipad (see above).  If I made it again I think I would do half the recipe as we seemed to have heaps of marshmallow.  I also would remember not to leave spoons in the saucepan with the sugar syrup.  A spoon stuck to the saucepan and I had to pour hot water over it to release it.  Must be that alarmingly sticky glucose syrup. 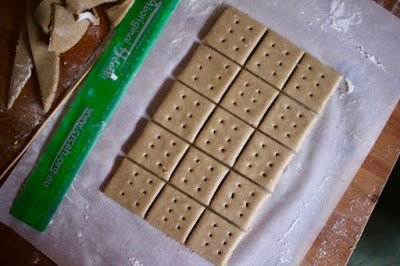 I've wanted to try Graham Crackers for ages.  I've never eaten a Graham Cracker before.  I've seen plenty online but I wish I knew what they tasted like so I could know how close these were.  It took me a while to make them because I had Sylvia underfoot and finally banished her from the kitchen to leave me in peace.  A ruler was useful for nice neat cuts (I always go crooked with those wheelie cutters.)  I found them nice but a bit plain.  I forgot to sprinkle on sugar and cinnamon, but more importantly I forgot the bicarb soda.  The crackers were quite hard to bite into and I want to try with bicarb and see if it makes a difference.  Given it has taken me years to get to the recipe I am sharing my version and will update when I try again. 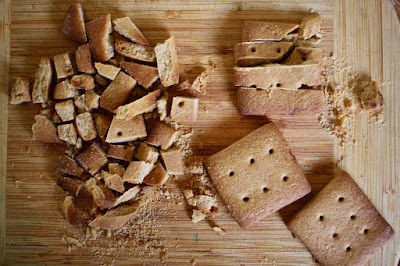 As soon as the Graham Crackers had cooled a decent amount - which means they were not that cool but were not burning our fingers when we picked them up - we put marshmallow on one biscuit and chocolate on another, put the marshmallow one under the grill (which is a broiler in America) until it was gooey and the chocolate under for a second.  Then we sandwiched them together and stuffed them in our mouths with marhsmallow and chocolate oozing everywhere.  We made enthusiastic sounds of bliss.  Those s'mores are amazing.  (Note our Graham Crackers were apparently much smaller than the traditional ones.) 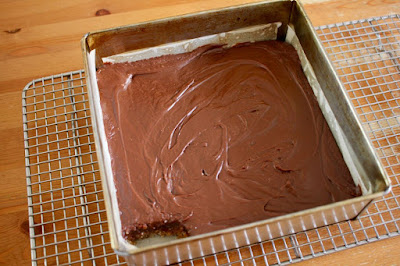 However the Graham Crackers were so tough to bite into that I decided to have a go at making S'mores Bars.  Lots of recipes had shop-bought marshmallows arranged neatly on top or lots of marshmallow creme (more like ours) with lots of topping over it.  I wanted the marshmallow on top to be grilled until it was browned and crispy with soft gooey melty marshmellow underneath it.

Finally The Brown Eyed Baker's take on the bars (aka slice) appealed because she mixed condensed milk into the chocolate layer.  Then I didn't have enough Graham Crackers left so I mixed some coconut into the base.  And with the Holy Trinity of condensed milk, chocolate and coconut I was so happy with the slice.  You can see in the above photo that I could not wait for it to be cool enough for marshmallows to taste it.  I was paranoid that the marshmallows would go too mushy if on a slice straight out of the oven. 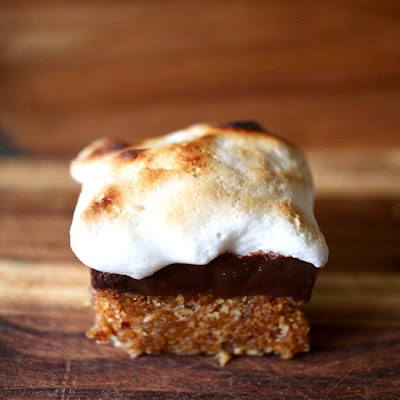 Unlike most s'mores bars I saw, I kept the bars and marshmallow separate until ready to eat and then we would put the marshmallow under the grill to crisp up.  I did have a few pieces of slice without marshmallow and I found it very sweet and best in small pieces.  It was awesome with the melted crispy marshmallow on top.  On the day I made it we had dinner at Zaatar after parent teacher interviews and then came home to a piece of this slice.  So so so so good!

I especially kept this recipe to post on American Independence Day.  S'mores seems such an American idea, as do Graham Crackers.  Both seem so foreign and intriguing to me.  I am glad I have sampled them and hope I will at least try the Graham Crackers again.  If you are celebrating Independence Day, I hope it is a fun celebration of the good in your big diverse nation.

I am sending this S'mores slice to We Should Cocoa and Baking Crumbs, two events that celebrate lots of great baking on blogs.

For the Graham Base:

Mix all ingredients together and press into a 20cm square lined baking tin.  Bake at 180 C for 10-12 minutes until just slightly browned around the edges.

For the Chocolate Layer:

Just before base is baked or as soon as it is out of the oven, melt together chocolate and condensed milk until smooth.  Pour over warm slice and cool.  This chocolate covered base keeps for a week, and can be a bit crumbly.

For the Marshmallow Layer:

When you are ready to eat a piece, cut a square of the cooled base, spread with some marshmallow and grill until browned and crispy on top.  Eat while top is warm.

NOTES: I used mostly choc chips for my chocolate layer but it was very sweet so I think a darker chocolate would work.  The slice would be vegan if the Graham Crackers were vegan and you used vegan chocolate, vegan margarine and vegan coconut condensed milk - I might try and experiment on some crackers without honey but I believe that honey is part of the traditional flavour so I wanted to try this first.  A young child commented that my photo at the top of the slice looks burnt.  It sort of it but in a good way.  As I often charred marshmallows on the bonfire I was quite happy with a bit of char on my slice.

Mix flours, sugar, bicarb and salt in a large bowl.  Rub in butter (or do this in a food processor).  Mix  milk, honey, molasses and vanilla in a small bowl.  Pour into dry ingredients and mix (either by spoon/hand or food processor) until you have a smooth dough.  You might need to knead it lightly on a floured surface.

Now you should put into the fridge for an hour or two but if you don't have time (like me) you can move onto rolling out straight away.

Preheat oven to 180 C.  Line a couple of baking trays with baking paper.  Mix topping ingredients.  Roll out dough on lightly floured surface to about 1/4 cm thick.  (I did it on a floured piece of baking paper).  Sprinkle with some of the topping.  Cut into squares.  Use a skewer or a fork to prick regular holes in the crackers.  Bake for about 20 minutes or until just a golden brown colour.

I will not reproduce this recipe but just note that I made it with commercial af from chickpeas that had been salted.  The marshmallows were still very sweet.  I beat the sugar syrup in for quite some time but not til it reached room temperature.  After a couple of days I scooped it out of the baking paper lined lamington tin to keep in the fridge.  Next time I might dust the tray with starch and icing sugar as recommended in the marshmallow recipe by Seitan is My Motor.