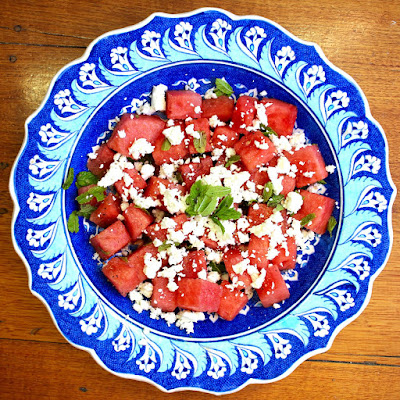 Melbourne is having a hot, humid and slightly damp spell.  The sort of weather where you get out your coolest dress, worry about the garden wilting and welcome thunderstorms to clear the air.  It is the sort of weather for salads.  I would recommend this watermelon, mint and feta salad. 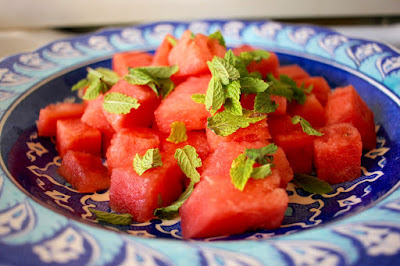 When I was young I hated watermelon.  I still dislike a fruit salad that is filled with melon.  These days I have come around to watermelon.  It has its moments!  I can now appreciate the sticky juice dripping down your chin on a hot day.  Yet Sylvia wants me to buy it too often.  And too often it sits forgotten at the back of the fridge.  In an attempt to avoid such neglect,  I finally tried the ubiquitous watermelon salad.  As a little bonus, it used up lots of mint from the garden too. 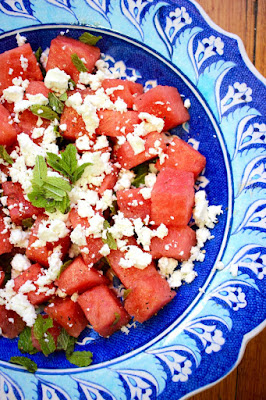 The day I made this it was to serve with a leftover salad which had not lasted the distance.  So we ate it with spinach and spiced nuts.  It was a nice easy meal on the first day of the school holidays but would have been better with a wider range of salads.  We had a similar salad at my mum's over Christmas and it was much better as part of a selection of salads.

It looks like New Year's Eve tomorrow wont be so hot as the last few days.  However if you are like me and just discovered NYE is Saturday and not Sunday, you would probably welcome a simple salad to add to the festive table.  And now that I have discovered that the year ends tomorrow, I can safely say this will be my last post of 2016.  Wishing you and yours a happy and safe New Year's Eve and I will be back next year.

Trim rind off watermelon and cut flesh into chunks.  If your mint leaves are large (mine weren't) roughly chop.  Mix watermelon with mint, lime juice and olive oil.  Arrange on a large shallow bowl.  Scatter with crumbled feta.  Season.

On the Stereo:
Matilda the Musical: Soundtrack
Posted by Johanna GGG at 21:08