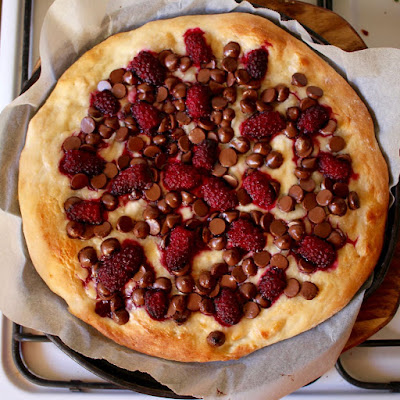 When I made my favourite pizza base recently I kept the savoury pizza simple and spent most of my energies on the dessert pizza.  We were watching a cartoon about a dog's Christmas Carol.  I was in the kitchen for much of it and the pizza wasn't ready until Sylvia was almost ready for bed.  But it was worth it when we all sat on the couch eating pizza covered in melting chocolate and tart blackberries. 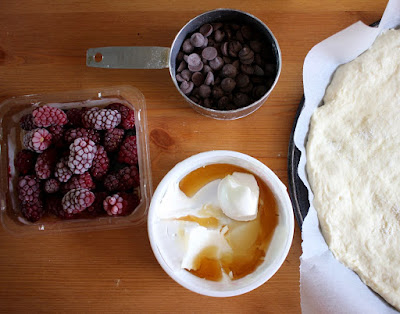 Yes, we were all very happy with it but the blackberries weren't a huge hit.  E was pleased to have a piece with not too many berries and Sylvia just picked all hers off.  But I loved the contrast of the sweet and tart.  The blackberries were the perfect contrast to the rich gooey chocolate and cream cheese. 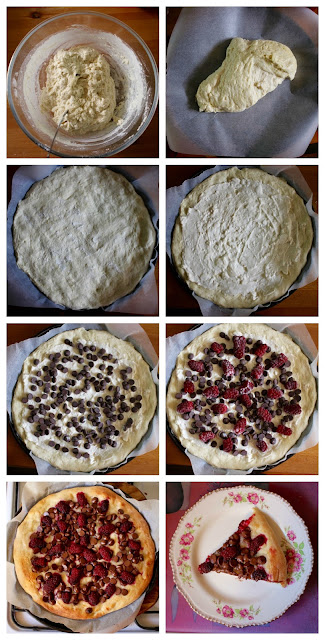 It is based on another recipe for chocolate and raspberry pizza that I blogged about years ago.  However it was madewhen my photography skills were even worse than today.  And besides, I can't resist tweaking a recipe, even mine.  But most of all, I really love it and good food is always worth sharing.  I just wish you have been in my lounge so I could have served you up a slice - we had plenty leftover - but a virtual slice will have to do!

I am sending this pizza to Choclette for We Should Cocoa.

Pat fast track pizza dough into a lined large pizza tray.  Mix cream cheese and maple syrup.  Spread cream cheese mixture over pizza base, sprinkle with choc chips and then dot blackberries over the top.  Bake for 15 to 20 minutes at 220 C until pizza is golden brown around the edges.  (I  baked mine for 20 minutes on middle shelf and then last 5 min on top shelve becasue it was still not browned around the edges.)  Leave for 5 to 10 minutes so you don't burn your tongue.  Eat warm.

NOTES: This could be made vegan.  The pizza dough is vegan and I used tofutti cream cheese.  I don't tend to buy vegan chocolate chips but if you have them then I am sure that would work.  Mine were about 50% cocoa and on the sweet side of dark chocolate.  If the choc chips were bitter, you might need more sweetener.  Other pizza bases could be used here.  Leftovers keep well in the fridge until the next day.

On the Stereo:
Glee: The Music, The Christmas Album: Glee Cast
Posted by Johanna GGG at 22:27