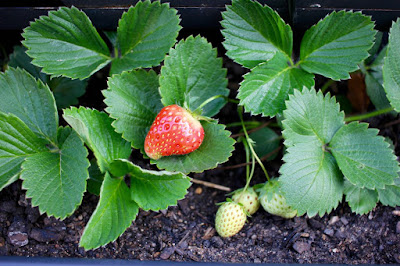 December has arrived, breathless and bold.  Everyone is celebrating: the end of school year, the summer and Christmas.  Last weekend we were at Coburg Night Market (Indian style nachos were amazing), a carol service (where a pub rock duo don't seem to know many carols and end up singing Wonderwall and Uptown Funk) and Sylvia's gymnastics display day (where I won the raffle).  We are high on excitement and low on energy!  And I need to find time to vacuum the house.  So let's ignore the floors while we take a peek into my kitchen.

Firstly I must show off our first and finest strawberry that Sylvia ate before they were either eaten by birds or defeated by my lack of watering.  Now that there is more sunshine and less rain, I need to get into better gardening habits. 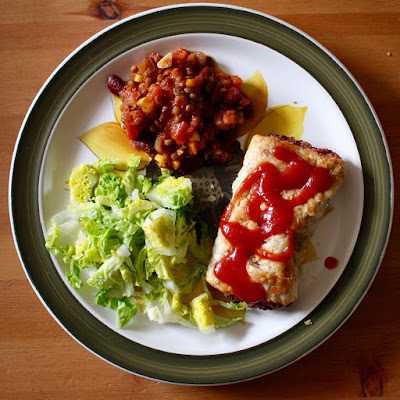 We went to the Melbourne Vegan Eats Brew and Food Fest in November.  E wanted some sausage rolls but they were taking too long.  Later when we returned to Half Pint Dairy for an ice cream they had lots of sausage rolls.  We bought some beetroot and cashew sausage rolls to take home for dinner.  They were magnificent.  We ate them with leftover bean stew and lettuce. 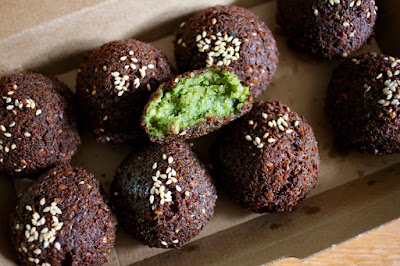 I haven't had as much time for dinner lately as I would like.  Some shortcuts have been called for.  Such as the wonderful falafel from Half Moon Cafe in Coburg.  They are made with broad beans and lots of herbs.  When fresh they are crispy outside and soft and green inside.  After a day in the fridge, they firm up but still taste exceedingly good. 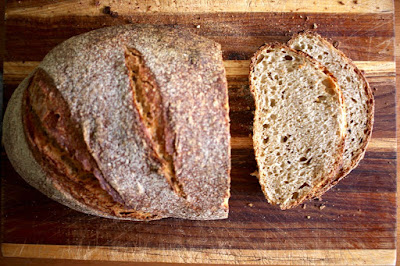 And then there have been days I haven't got to the shops.  I set out to make overnight sourdough bread a couple of weeks back and found I was out of my regular white flour.  I looked for what flours were about the kitchen and used 1/4 white flour, 1/4 wholmeal flour and 1/2 spelt flour.  The bread was great with far more depth of flavour, albeit a little less lift. 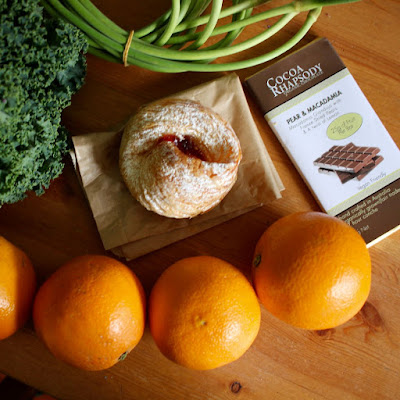 We have made time for the Coburg Farmers Market.  The cruffin was for E though Sylvia and I had to taste the strange hybrid of a croissant and muffin.  The garlic scapes ended up in nachos.  The oranges were quartered and put into Sylvia's lunchbox.  The kale went into this salad.  And I enjoyed the new vegan creamy macadamia and pear chocolate from Cocoa Rhapsody. 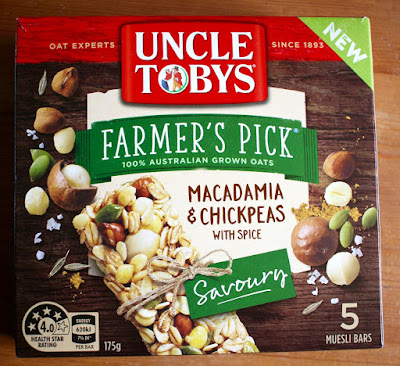 I was so excited to see Savoury muesli bars.  But I felt cheated once I got them home and tasted them and checked the ingredients and the sugar content.  They were held together with glucose and tasted slightly sweet with some cumin flavour.  The biggest betrayal was looking at the sugars in the nutritional breakdown which was about 13 g per 100g, compared to Sylvia's regular sweet muesli bars which are about 15g per 100g.  Disappointed!  They wont be in my shopping trolley again. 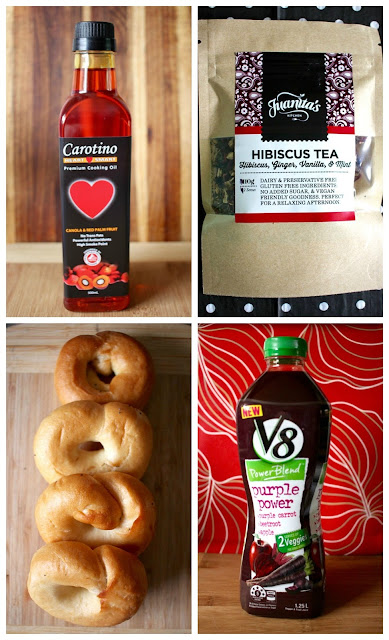 We have bought some fun stuff too.  I love the colour of the carotino oil.  I thought it was made of carrots but it is actually canola and red palm heart.  The loose leaf Hibiscus tea with ginger, vanilla and mint is from Juanita's Kitchen and very nice (Actually I was given this after a meal at the cafe but not in my capacity as a blogger.)  I love the mini bagels.  They are great to store in the freezer for lunches for Sylvia when we are out of bread!  And I really love the purple carrot, beetroot and apple juice.  I find it quite strong and have it with half juice and half soda water. 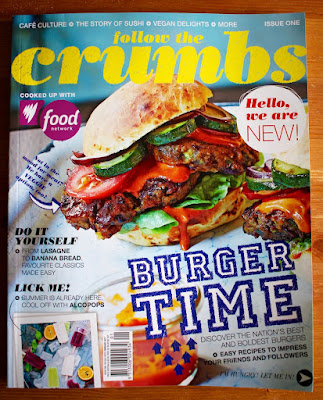 I have so many recipes to try that I usually can resist the temptation of food magazines.  However I was tempted by this new Follow the Crumbs magazine I picked up in the supermarket.  It was so interesting I bought a copy (and it wasn't cheap at $9 or $10).  I enjoyed looking at it and then not had time to pick it up again. 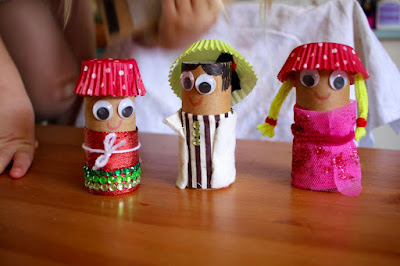 Sylvia made this toilet paper roll people one day when she had idle time.  They are rather cute! 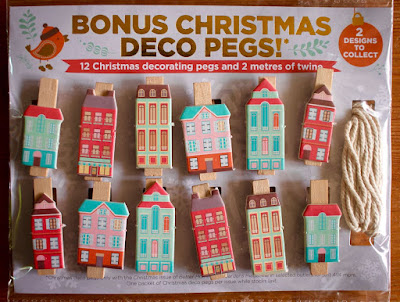 My neighbour gave to a charity that came knocking at her door and they gave her vouchers to buy some magazines.  She gave me the vouchers and so I received these cute house pegs with the magazine. 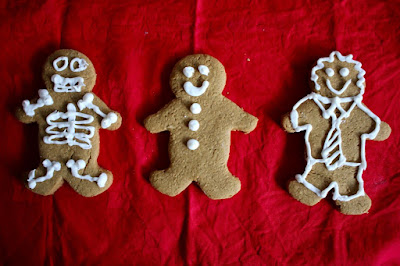 I spent November blogging lots of vegan recipes for Vegan Mofo.  Above are some gingerbread men from Isa's Vegan Holidays Cookbook. I didn't like them quite as much as my regular gingerbread but it was pretty good.  And we had fun decorating the gingerbread men.  Sylvia did the skeleton and I did the guy in the tie. 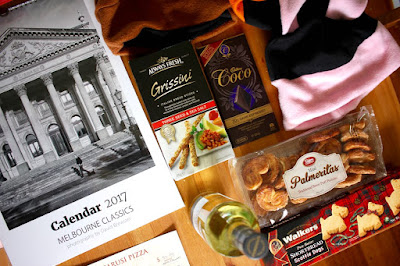 Finally here is a peek into the raffle that I won at the gymnastics display day.  I had made gingerbread houses to donate to the raffle and was embarrassed to win one back.  In fact, so mortified was I that I asked that it be taken out of the hamper and raffled again (much to Sylvia's dismay).  We had lots of other lovely food and gifts in the hamper, including a David Brewster calendar and some gorgeous fleece hats that one of the coaches made.  Sylvia has been wearing one of the hats to bed every night.  (And yes it is summer!)  We also have a voucher for I Carusi Pizza which I look forward to using.

I am sending this post to the In My Kitchen event, that invites bloggers to share a peek into their kitchen.  Started by Celia of Fig Jam and Lime Cordial, it is currently hosted by Lizzy of Bizzy Lizzy's Good Things.  If you would like to join in, send your post to Lizzy by 10 November .  Or just head over to her blog to check out some fascinating kitchens.
Posted by Johanna GGG at 22:39