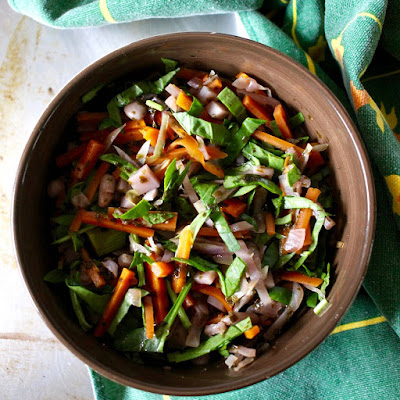 Have you ever wondered what miso soup might taste like if it was invented in Wales?  No?  Nor I.  But if you did, I think I might have an answer in this soup that I made for dinner last week using Welsh laverbread.

After opening my tin of laverbread for a nut roast I wanted to make sure I used the rest.  After all, this laverbread is a rare delicacy that I was lucky to be sent  from Wales by Shaheen.  I didn't want it to go off.  Initially I had an idea I would make potato patties with the laverbread (which is like a seaweed paste).  Then it just seemed practical to make soup.

It is always practical to make soup because I often buy vegies with great hope.  Yet sometimes the crisper drawer of the fridge looks sad with neglect.  And the only thing to do is throw the vegies inot a soup or stew.  As many of my soups do, this one borders on a stew because it was quite packed.  But it was watery enough that I call it a soup. 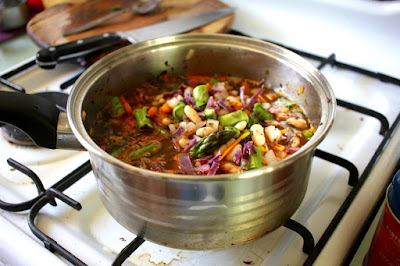 The laverbread gave a lovely depth of flavour.  I am still a bit wary of laverbread and again was very relieved that it made the soup so good.  I also loved it being packed with vegies and beans.  It was a very satisfying soup to eat.  We both went back for seconds and on the following night I ate the leftovers myself and found something else for E to eat for tea when he came home later.  (Ssshhh don't tell him!)  I justified this because I thought it was like a Welsh version of miso soup.  And E is not so keen on miso soup.

Thanks again to the lovely Shaheen of Allotment 2 Kitchen for sending this my way.  She has lots of laverbread recipes if you are lucky enough to have a tin.  (Check out my nut roast post if you want to see photos of laverbread in the tin.)  I had thought to put a list of other Welsh recipes at the end of this post but then I found that I have very few Welsh-inspired recipes.  Which is shameful, as my great grandfather come to Australia from Wales. Watch this space.

I am sending this soup to Allotment 2 Kitchen and The VegHog for Eat Your Greens, to Rock My Vegan Socks and VNutrition for Healthy Vegan Fridays, and to Vegetarian Mamma for Gluten Free Fridays.

Fry onion in oil in large saucepan for 5 minutes over medium heat.  Add carrots and fry an additional 5 minutes.  Add cabbage and cook another 5 minutes.  Add boiling water, potato, laverbread, mustard powder, smoked paprika, stock powder, worcestershire sauce and salt.  Bring to the boil and simmer for 10 to 20 minutes until vegies have softened.  (I cooked it for 10 minutes and left it a few hours.)  Stir in asparagus and spinach and gently cook for another few minutes.

On the Stereo:
Tinsel and Lights: Tracey Thorn
Posted by Johanna GGG at 12:34