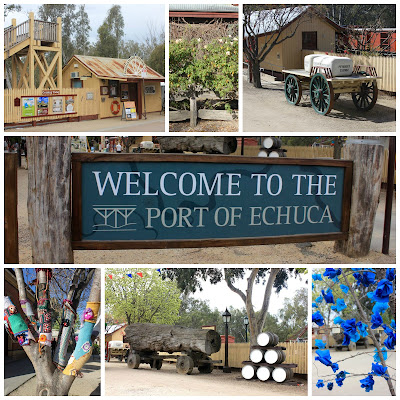 One of the main reasons we chose to spend a week of the school holidays at Echuca was that I love an historic town.  Echuca is the closest point to Melbourne on the Murray River.  In the nineteenth century it was a busy port for paddle steamers bring products from outlying towns to take to the city.  The Port of Echuca, the historic heart of the town, was the place we spent the most time. 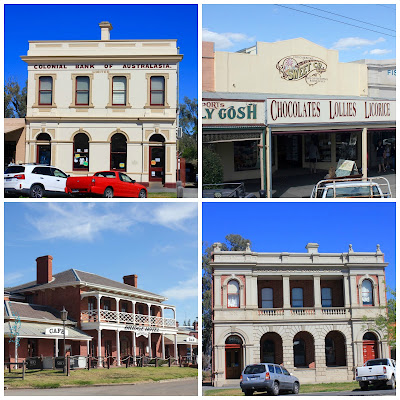 Echuca boasts plenty of interesting architecture that is reminiscent of its glorious heyday.  Even the shops in the high street have heritage facades.  The sweet shop is not quite as heritage inside.  Sylvia loved it as much as she disliked the ubiquitous bull ants.  I was more surprised at how hard it was to find an all day park, but not impossible. 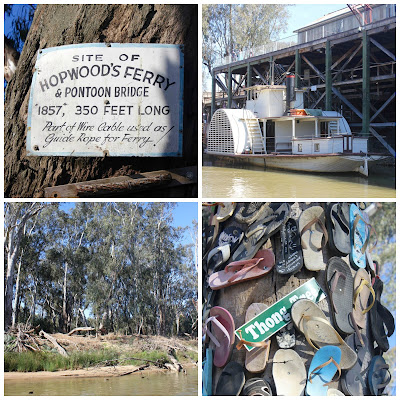 A visit to the Echuca Historical Society Museum (1 Dickson St) was worthwhile in getting my head around the history of the town, though there was very little on the town's Aboriginal past.  It did have lot about paddle steamers, floods, and the 'founder' Henry Hopwood.

I enjoyed the display of historic dresses, being able to step into a goal cell, and reading an unintentionally amusing 1950s text on sewing with advice such as needing to look your best while sewing just in case a visitor or your husband drop in.

Once I had the context it was interesting to look around Echuca and see details with more understanding.  Well mostly!  The thong tree was still just good fun. 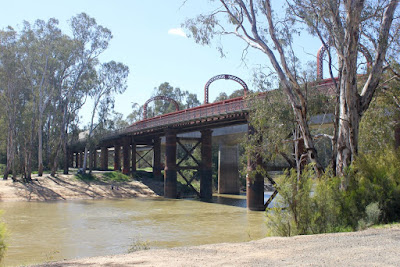 On our first morning, we decided to walk through the forest and along the Murray River to the Port of Echuca.  I don't think Sylvia quite understood that we were on the state border between Victoria and New South Wales.  We drove across this bridge to Moama later in the trip and it was not quite as exciting as crossing the Murray when I was thirteen.  I remember my brother kneeling down and kissing the ground because it was so momentous that we had finally gone interstate. 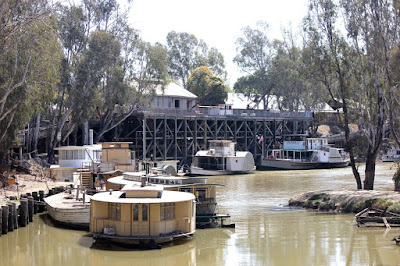 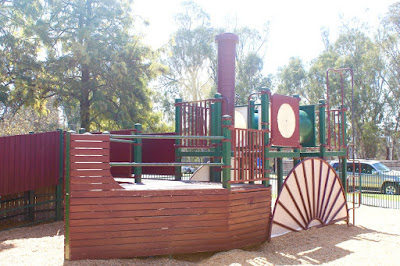 The paddle steamers are Echuca icons.  They are everywhere.  On tea towels.  On postcards.  Even in the playgrounds.  The above paddle steamer play equipment is fun and quirky.  I love quirky.  The yarn bombed tree and plastic flowers added colour to the Port of Echuca.

The Oz Maze however was a bit quirky for me.  We went there one evening and got so lost in the maze - looking for the capital cities of Australia - that I started to worry that a few of the broken planks had been ripped off in desperation by other lost souls.  We ended up ringing the reception so they could show us the way out and stamp "lost in the maze" on our cards!  The shame!  But I was too hungry! 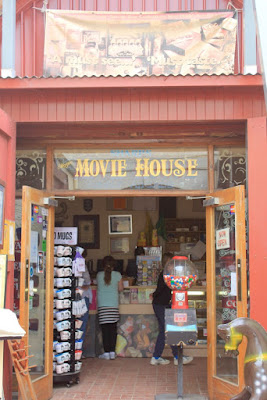 E was most excited about Sharp's Magic Movie House and Penny Arcade.  Entrance costs $7 which includes some coins to feed to the vintage slot machines.  Not pokies!  These are more fun.  You can test your strength, shoot a gun, consult a fortune teller, watch the firemen put out a fire, or just see pictures that might have made a bishop blush last century.  We saw a bit of a Three Stooges movie on the big screen and then bought some delicious fudge. 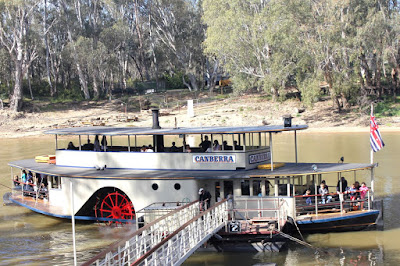 The main attraction in Echuca was a ride on a paddle steamer.  I was disappointed to find that the Emmy Lou was built relatively recently.  If I had done my research I might have chosen to ride the Pevensey which was renamed the Philadelphia in the 1980s mini series, All the Rivers Run.

However I was pleased with our choice of the Canberra, built in 1912.  I enjoyed seeing the view as we chugged along.  The captain's commentary gave information on each paddle steamer we passed.  Possibly most interesting was watching the hot and noisy engine in the middle of the boat and the paddles pushing the water around on either side. 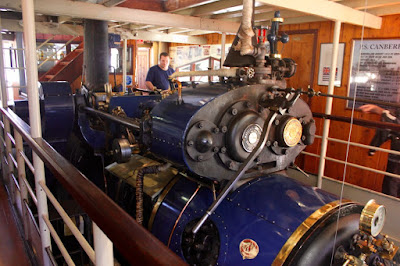 The captain stood at a large wheel steering the boat and we sat at the back and watched the rudder swing to and fro.  When they asked if any kids wanted to go and have a got at steering, Sylvia joined the queue.  She held one end of the wheel and the captain held the other.  But when the captain walked away from the wheel, the responsibility was too much for Sylvia and she also walked away.  It made me laugh.  And of course there was another kid ready to take over the helm. 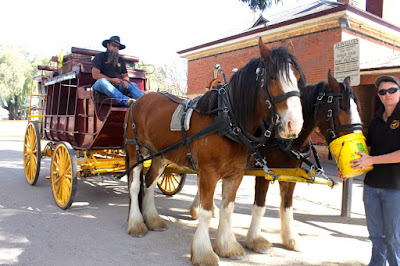 Then Sylvia decided she wanted a ride on the stage coach.  Do you see where the driver is sitting?  We sat up high behind him.  It was a bit scary climbing up and even scarier climbing down but once up there is was fun to watch the world go by from up high. 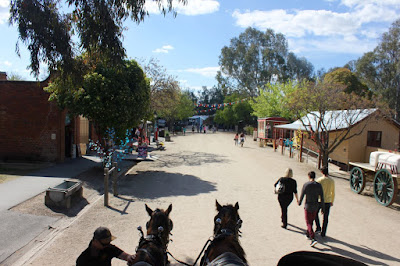 As we started driving through the Port of Echuca, an old time bard greeted us with a song including some yodelling.  Later on we visited his art gallery where he gave us instruments to play along to one of his tunes.  E enjoyed it so much that he brought his ukulele with him the next day and had a strum with the bard. 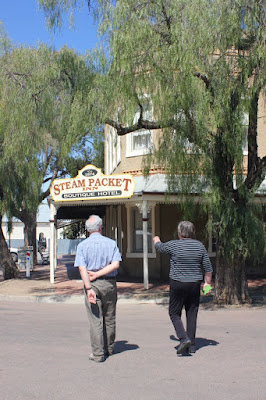 When my parents came up on our last night there, we walked around to see the port from across the river again.  It was a lovely sunny day.  Sylvia decided it would be fun to walk into the Murray River after seeing some other kids in there.  She convinced me to join her.  We made faces at each other about how squelchy and slimy the mud at the bottom of the river was and got very dirty feet.  I am sure I had green toes for the rest of the day. 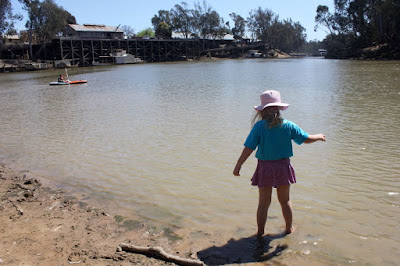 As usual we didn't get to see everything.  We never visited the beer bottle museum or the holden car museum, both of which appeal to my love of quirky museums.  The local history society has a heritage walk (free) and there was also tours and then there was the Discovery Centre that we never visited.  However on a pleasant spring day, I would have just liked more time to sit on the banks of the Murray and watch the world pass us by while wondering how busy this port must have been in days gone by.
Posted by Johanna GGG at 14:22