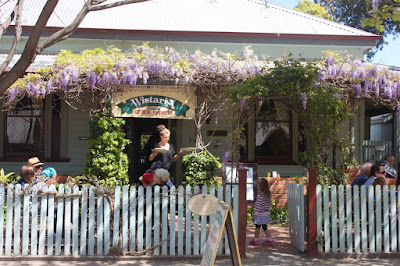 When you wonder along the dusty road of the Port of Echuca, the most striking eating establishment has to be the Wistaria tea rooms with its magnificent boughs of purple wisteria draped over the verandah.  We ate there twice on our recent holiday to Echuca. 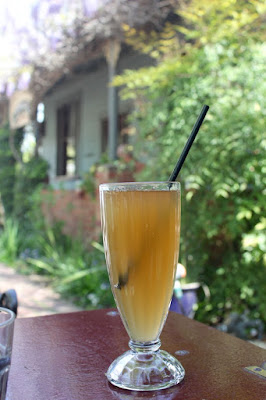 Both times we sat outside to look over the historic Port of Echuca, to wave to the stage coach going by and watch the tourists.  The first time was for lunch.  It was a warm day and we had been told that our meal could take some time as it was rather busy.  So we relaxed with cold soft drinks in large glasses.  Sylvia had creamy soda, I had ginger beer and E had sarsparilla.  Suitably old fashioned drinks for a historic area. 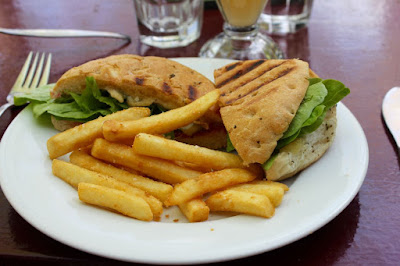 Like many places in Echuca (and country Victoria) the vegetarian offerings were thin on the ground.  I think the fritatta was the only vegetarian meal.  I opted instead to have the focaccia with camembert, cranberry sauce and lettuce but no turkey.  The foccaccia was nice but not amazing.  The bread didn't impress me much.  I was more taken with the lovely crisp chips. 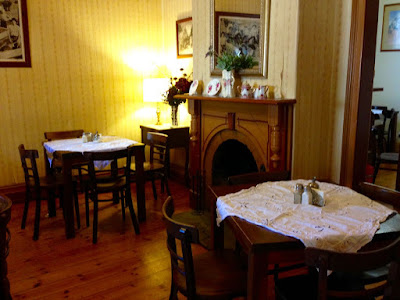 We sneaked a peak indoors.  It was very quiet as it was the end of the lunch hour and besides, it was much nicer to sit outside in the sun.  If the weather had been inclement I would have been very happy to sit inside.

A few days later we tried to come here for afternoon tea with my parents and my brother.  At 3.30 pm they were already closed. 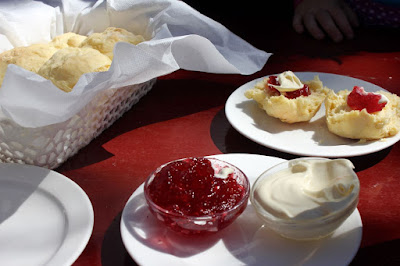 Not to be defeated, we returned the next morning and snaffled a table.  I had decided I was getting scones with jam and cream.  Then my dad ordered the pancakes with berries and yoghurt.  He needed help so I gallantly offered to share it.  When the basket of warm scones came I had a taste and thought them pleasingly light and fluffy.  E and Sylvia were less impressed.  My mother was most displeased that the jam was not home made.  The Wistaria did earn brownie points in having loose leaf tea even for my peppermint tea. 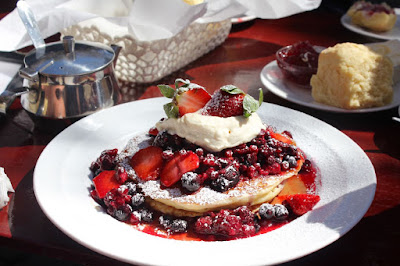 The nicest dish I had at the Wistaria was the pancakes.  They were fluffly with a really generous serving of berries, though I would have welcomed a good drizzle of maple syrup.  I particularly loved that they were served with yoghurt rather than ice cream or cream.  By the time I shared it with my dad and everyone had a taste, I didn't have that much and could have eaten more. 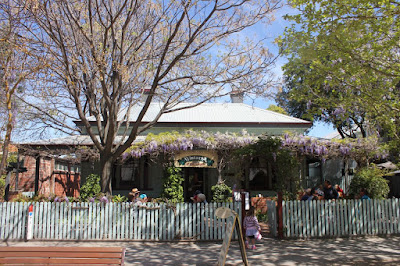 I confess to enjoying the Wistaria more for the historic ambiance than the food but the food was much nicer than most that we had in Echuca.  I would happily return there should we find ourselves in Echuca again.