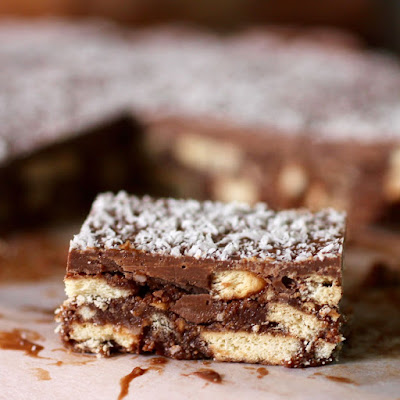 There are some recipes I love because they taste great.  Then there are others where the taste goes deeper than flavours and burrows into the memory with a nostalgia that calls forth another time.  Hedgehog is one of those special recipes for me.  I have been eating it and making it since I can remember.

So when I was recently asked to bring a traditional recipe to a food swap, hedgehog was one of the first recipes that sprang to mind.  I have a recipe from my mum that I love.  Yet my mum often doesn't stick to one recipe.  She follows the same recipe for a while, then alters it or tries a new version, then returns to her favourite recipe.  I don't think she would mind that I have - ahem - four other hedgehog recipes since starting this blog. 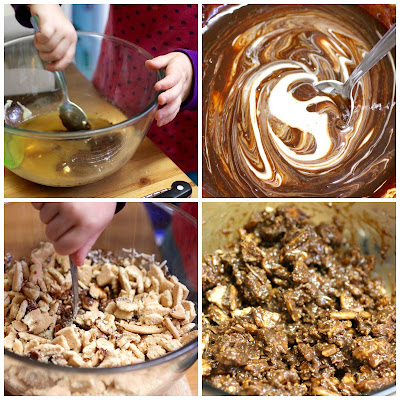 Who would have guessed there could be so many variations on this plain old slice.  Almost as many as there are names.  Others know this sort of slice as tiffin, biscuit cake or fridge cake.  I guess the main thing is that it is no bake and must have chocolate and chopped biscuits in it.  I know others suggest using any variety of plain biscuits but for me it is always Marie biscuits. 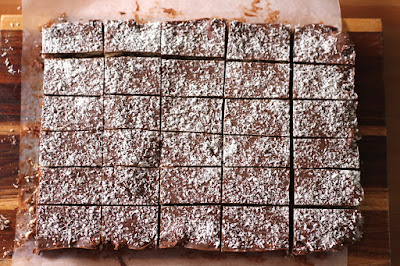 As well as being in love with hedgehog, I cannot resist anything with condensed milk in it.  Hence my need to try both Lucy and Lauren's recent hedgehog recipes with condensed milk in them.  I merged them, using lots of melted chocolate like Lucy but coconut rather than sultanas like Lauren.  Always coconut.  That is why I even sprinkled some on top.

I highly advise against making this with small children just before they are heading to bed.  Yet I just wasn't organised enough to make it earlier.  The park had been just too much fun! 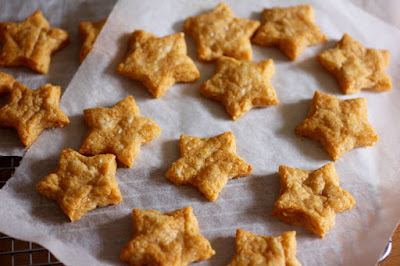 The hedgehog was destined for our local neighbourhood house open day that was held today.  I also made cheese stars (a bit like this) so that Sylvia has something to eat that is not sweet.  As it was, they had vegetarian sausages at the bbq so it wasn't as bad as I feared.  Though Sylvia was very taken with the cake stall.  Yes, my food ended up on the cake stall table as I had not realised it was different from the food swap. 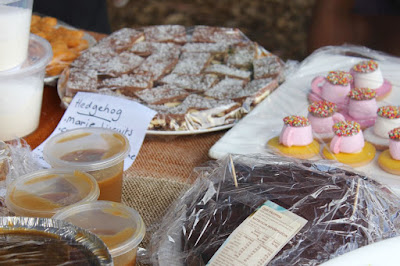 Did I mention that the hedgehog tasted amazing.  Much richer than my regular one.  Chocolatey and gooey and very sweet.  Not for the faint-hearted.  At one stage I thought my hedgehog was not selling much.  Then I returned to the cake stall and it had disappeared.  Apparently someone (with very good taste) bought the rest of the slice that had not been sold.  Then I felt sorry for everyone else, except me because I was clever enough to leave a few pieces home for us! 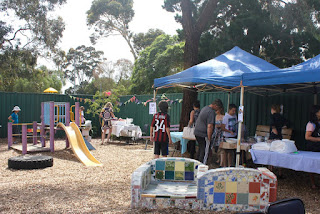 The open day was a great success with a lovely relaxed vibe.  I sung with a singing group I have had one rehearsal with.  A friend did face painting.  Sylvia and her friend did some craft activities.  There was more music, an AGM, sewing activities, the sandpit.  As always I find the neighbourhood house a welcoming and generous place to be. 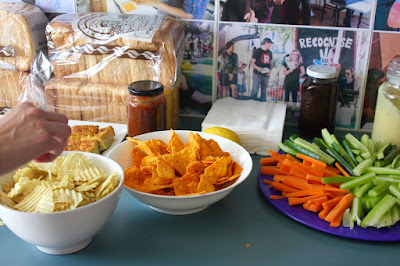 We would have stayed longer but E had another gig on.  He was playing in the Darebin Music Feast with his ukulele group.  I found the Music Feast a really interesting and creative place to be.  The ukulele gig started with a few uke players down the High Street in Northcote and members of the group and other ukulele groups were stationed along the way to join in as they walked up to the Town Hall.  This was a really fun start. 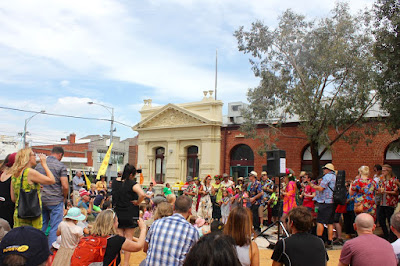 Once at the town hall, they played a high energy gig in the forecourt that was a great crowd pleaser.  My dad came along too and really enjoyed it.  While the morning had been cool and windy, by the afternoon it was quite warm.  A little bit too warm actually. 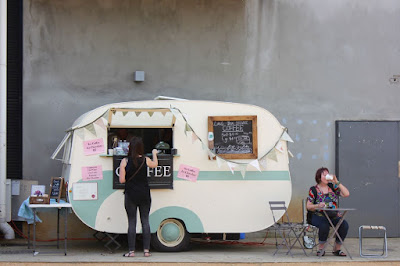 As the gig finished my dad, Sylvia and I headed to the very cute Little Box Brownie caravan for cool drinks.  Well they had cool drinks and I had a slice of brownie.  Very good brownie.  Rich, moist and a little crumbly.  I was pleased to enjoy the offerings of a local blogger. 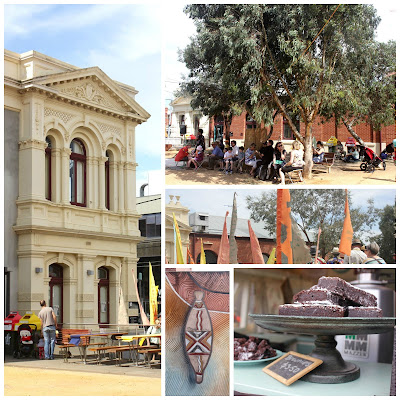 Before we could sit and relax, we were invited along to a show in a lift.  Who could resist such a quirky idea!  So it was just me, E, Sylvia and my dad in the audience for the show!  Not a big lift.  The performer was quite odd in an entertaining way.  We all found ourselves singing along to Cats are Forever and watching a slide slow of cats.

Then we listened to another band in the Town Hall as we sat outside in the shade relaxing.  There were a few food trucks there but by then we had eaten our full. 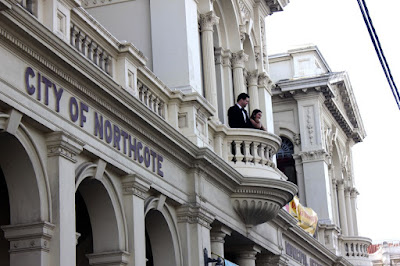 As we left, we caught the end of an opera performance from the balcony of the town hall.  I love a festival that constantly surprises and delights. 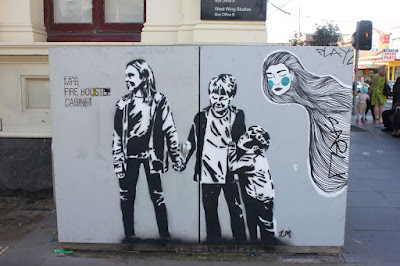 Northcote is the sort of suburb where there is quite a bit of street art.  This was my favourite piece of street art that I saw while we were there. 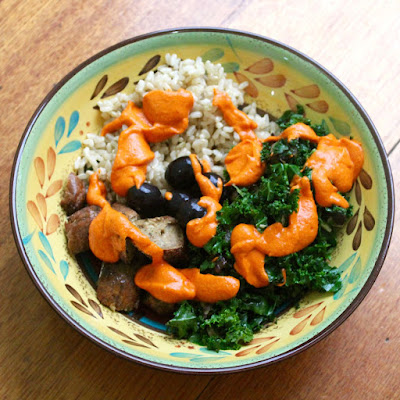 Making the hedgehog had required a trip to the supermarket.  So I was organised enough to plan tonight's dinner last night.  I made the Isa Does It pizza bowl with kale, rice, veg sausages, tomato cashew sauce and olives.  Like everything else I have tried from this cookbook, it was fantastic.  I really needed some good food after eating out all day and this was perfect.  Though I was glad to have a piece of hedgehog leftover for dessert!

I am sending this to Create Make Bake and Bake, Play, Smile for Fabulous Foodie Fridays #75, and to Karen and Janie for their Bonfire Night/Halloween edition of Tea Time Treats.

Crush marie biscuits in a paper bag so that the chunks about 1cm wide or less.  Melt butter and chocolate together.  Stir in condensed milk and coconut.  Spread into lined slice tin (18 x 28 cm).  Chill in fridge for about 30 minutes or more.  For the topping, melt milk chocolate and dark chocolate together.  Spread over the slice.  Sprinkle with coconut.  Chill until firm.  Remove from fridge about 20 minutes before cutting and slice into square.

NOTES: This could easily be made vegan by using vegan biscuits (such as Nice biscuits), vegan margarine, vegan chocolate and vegan condensed milk.  For the topping it might be a matter of using dark chocolate and some coconut oil if you can't find vegan milk chocolate.  If you don't live in Australia and have trouble finding Marie biscuits, you can use tea biscuits, digestives, shortbread, graham crackers or whatever plain crisp biscuit (cookie) you love.

Update September 2016 - made this with a 72% chocolate that was so rich and dark that I added a few tablespoons of golden syrup.  It was still very rich but in a good way.

On the Stereo:
The very best of Peter Allen
Posted by Johanna GGG at 22:33