Echuca holiday, accommodation and what we ate 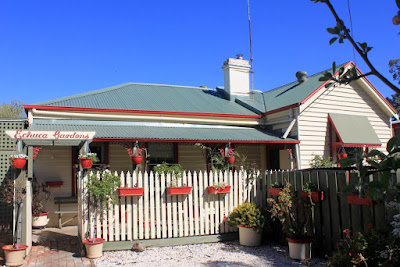 After lunch and book shop browsing in Castlemaine, we arrived at our rented cottage in Echuca in late afternoon.  Echuca is a few hours drive north of Melbourne on banks of the Murray River.  This post is an overview of the cottage where we stayed and places where we ate.  Echuca did not strike me as a town of amazing foodie cafes.  Yet we ate well.  I will write about the sightseeing in the historic port in a separate post. 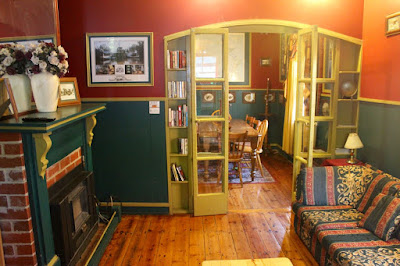 Echuca Gardens has a few self catering accommodation options and we chose the cottage that sleeps 8 people because it had the larger lounge and kitchen. As we had so many beds, we invited my parents to visit which they did on the last night with my brother Dave.

I also liked that it was about 150 years old.  The owner, Kym, had renovated the cottage when it was in disrepair.  I loved all the friezes, pressed metal and framed pictures.  The frieze in the kitchen was particularly impressive for its Australiana theme with both the yellow and green colour scheme and the wattle motifs. 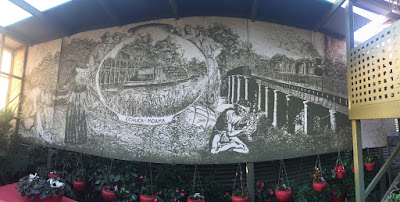 The owner of Echuca Gardens is talented and fascinating.  He invited us into his house to see his extensive collection of souvenirs from his travels and hear him play piano to us.  He also is an artist and has painted murals in the garden of the place.  There were a few other accommodation options there included gypsy wagons which unfortunately were only large enough for a couple. 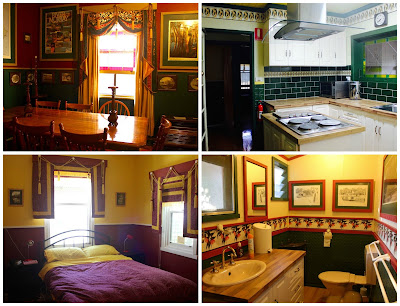 The kitchen was well equipped with both an oven and dishwasher, basic equipment as well as some basics in the pantry.  The only thing we really missed was a bowl for E to make porridge in the microwave.  I also had problems with finding the second switch to turn on the stove and oven one night and ended up cooking pasta in the microwave. 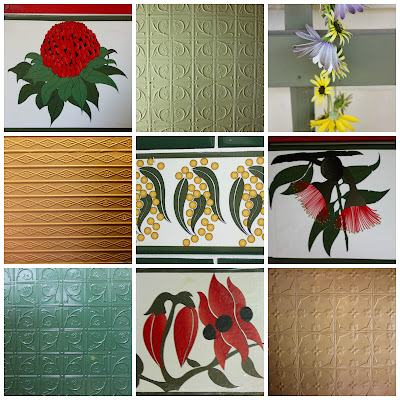 What we ate at the cottage

We came with lots of food, most of it in packets or tins that meant it could be taken home again.  I didn't bake any sweet goods for the holiday but I made a loaf of bread and I had a few honey joys that weren't sold at the Carnivale. 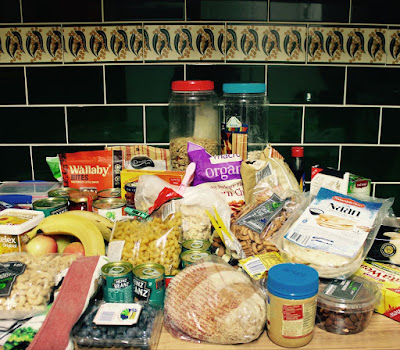 We ate most breakfasts at the cottage.  Mostly croissants (for E), muesli and yoghurt for me, cereal for Sylvia and toast for all of us.  From our holiday pantry we had dinners of curries and naan bread one night and pasta with pasta sauce and salad.  One night we had fish and chips (corn jack and chips for Sylvia and me) from Fish Bite Seafood (158 Hare St).  I made a salad to eat with it which made it less heavy.

I was really glad of some vegetables back at the cottage because there were not many in the meals I ate out.  In fact, much as I loved Echuca it was not a town of foodies.  I did not find any cafes which provided impressive vegetarian meals and had to improvise on a few occasions.  It was only after we left that my mum spotted a cafe that had a sign saying it served vegetarian and gluten free food (opposite the Black Pudding on the High St). 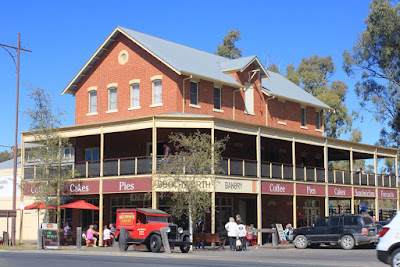 We wanted to eat brunch out one day and decided to go to the Beechworth Bakery.  It is an impressive bakery for a cuppa and something sweet but not a place for a vegetarian to find breakfast (given that I don't like eggs).  We all had cheese croissants (except E had ham in his as well).  I hadn't seen many other places that did interesting vegetarian breakfasts but I might have had a fry up at the Black Pudding just down the High St. 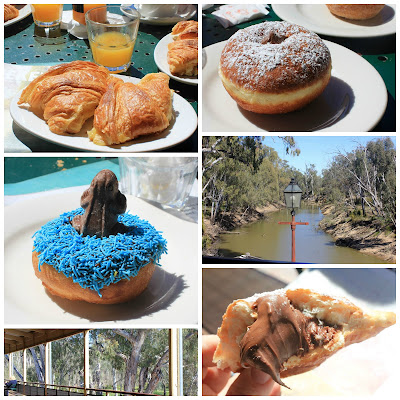 As with so many eating establishments in Echuca, I was more impressed with the physical place than the food.  It had amazing views out the front over the High Street from the balcony or at the back over the Campaspie River.

We enjoyed our croissant and juice but I wanted something sweet.  Fortunately we were there late enough to justify morning tea and we each had a doughnut.  I had to try the nutella doughnuts which I loved, Sylvia had a cute frog in a pond which amused her and E went the traditional route and had a cinnamon doughnut. 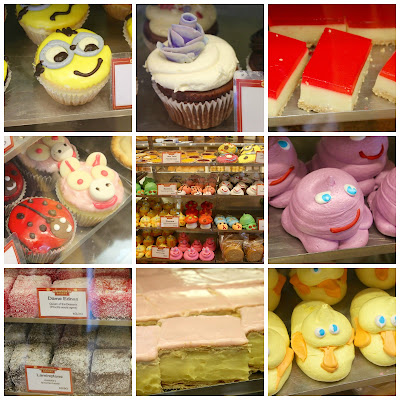 I loved looking at the cakes and slices display in the Beechworth Bakery.  It was so much fun with all the marshmallow creatives and decorated cupcakes.  I really loved that it also had lots slices (lamingtons, jelly slice and vanilla slice) that you would find in a traditional Aussie country bakery.  They also sell pies and pasties which I have enjoyed before. 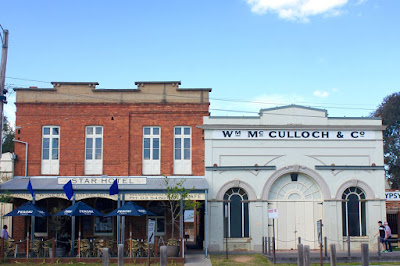 One of the lunches that I most enjoyed was the Star Hotel.  We might well have been here after the Beechworth bakery as we only had a light lunch.  E ordered the tomato and basil bruschetta which he enjoyed with a nice rocket salad.  Sylvia and I shared the spicy capsicum, hummus and tzatziki dips, olives and pizza bread.  The dips were nice but the pizza bread was amazing.  It was crisp on the bottom and light and airy and warm.  In fact as I look at their online menu I curse that I missed their dessert pizzas.  However I wasn't that hungry and they weren't that cheap. 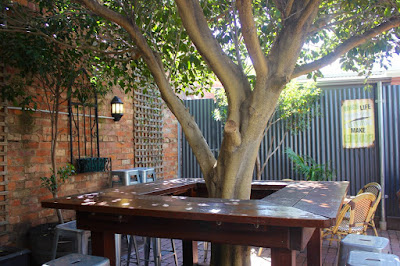 We ate in the leafy courtyard.  Our time in Echuca had perfect mid 20s temperatures, blue skies and sunshine.  So we welcomed the shade.  However the dappled light beneath the tree did not make for great food photography. 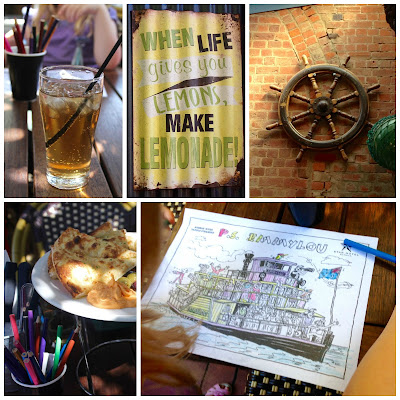 I really liked the place and would have liked to have returned if we had time (and E had liked it more).  It was one of the pricier places we went.  However the staff were friendly and I loved the little interesting touches in the decor.

The Star Hotel is situated in the heart of historic Echuca and had a door to a downstairs area where one of the staff told us people used to drink beyond the legal hours.  Sylvia, bless her little innocent heart, asked if the people who worked there would have known.  We were invited to have a look but we had a paddle steamer to catch.  We meant to return to check it out but just ran out of time. 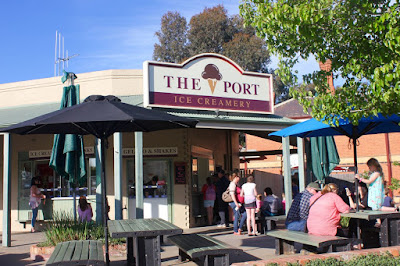 Sylvia loves ice cream so we went for an ice cream at the Port Ice Creamery.  I had a cherry ripe with coconut and cherries and chocolate swirl.  It was pretty ordinary.  Lots of artificial and not much flavour.  Sylvia had a rainbow ice cream which is for kids with all their taste in their eyes.  E hit the jackpot with an English toffee ice cream that I wished I had ordered.  Sylvia and I tried to snatch as many mouthfuls of it as we could. 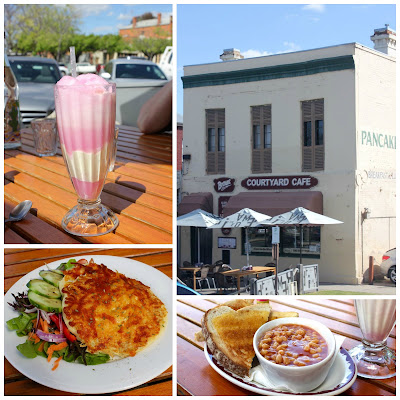 I had promised Sylvia pancakes at another cafe but I think it was the echoes of my favourite cheese pancakes at the Pancake Parlour that drew me into this Brownz Courtyard Cafe with Pancakes written large on its side.  As well as pancakes there were lots of breakfast options and kid's meals.  I liked this place with its friendly staff and extensive options.

I chose the deckhand's choice which was a cheese and onion pancake with salad on the side.  The pancake wasn't as good as the Pancake Parlour but I enjoyed it.  The addition of onion was great.  It was a relief to have some vegies with my meal.

I was pleased hat Sylvia had baked beans.  By the time we were here she was over having chips at every place!  She did balk at the toast being buttered and cut the wrong shape.  I let her deal with it and she eventually ate some.  I guess whoever said that travel broadens the mind, never thought it might mean having your toast cut differently!  She was more excited about her raspberry spider (ice cream in raspberry lemonade).  E enjoyed an egg and bacon sandwich. 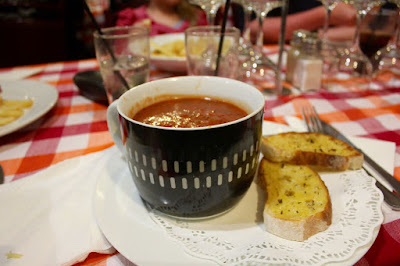 On our last night we went to dinner with my parents and my brother at the Tara's Hall Hotel which was the local pub near our accommodation.  We were told that it was the place the locals ate.  For some people this is high recommendation but I find this makes me quite nervous when dining in the country (where a country chef once told me vegetarians like me was the bane of his life).  And my concerns proved to be well founded.  The pub was a meat eaters delight.  In fact the huge steaks even defeated my parents who love their meat.  The steaks were almost the size of their heads!

My heart sank when I saw that the only vegetarian dish on offer was tomato soup.  It is not my favourite soup and though it was served in a cup it was a huge bowl sized cup.  Sylvia had some pasta with parmesan that she didn't eat so I added a bit to the soup.  We also ordered garlic bread - which came in surprisingly small serves.  It was just two small pieces of bread.  I guess guests usually have to save room for the huge steaks.  And we had some chips too.  E had bruschetta which he liked.

It was my brother who was happiest with his meal because they let him have the kid's serve of the chicken parmigiana with chips, which was plenty for him.  It was a nice place to eat and the staff were lovely but I just would not return because they do not cater well to vegetarians. 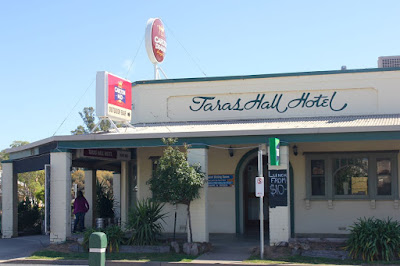 We also enjoyed eating at the Wistaria Tea Rooms which I will write about in a separate post.  I would not rush back to Echuca for its food offerings but I think it did a decent job for an Australian country town.  I am sure there is more food to explore in Echuca.  However I really loved the historic buildings and port and will write more about that soon.
Posted by Johanna GGG at 10:50