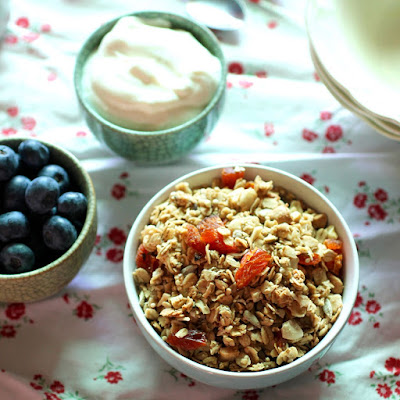 I never understand people who don't eat breakfast.  I never leave the house without breakfast.  Even if I go out for brunch.  However I ricochet from dish to dish when it comes from what to eat for breakfast.  This year it is has been muesli.  The toasted kind that Americans call granola.  I've been eating chocolate muesli every morning.  All year.  So recently fancied a change.  Cindy raved about tahini muesli so I tried that.  And agreed with her. 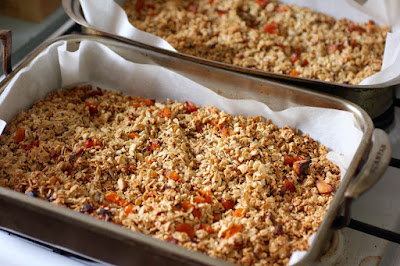 The tahini gives the muesli a rich satisfying aroma, though the taste is not overwhelming.  This was enough for me as I like my tahini in small amounts.  I have been making muesli regularly all year but putting this together was fairly straightforward, as I have my method honed to suit me.  While I have found that cranberries are fine to add midway through baking, the apricot was a bit chewy when added in this way. 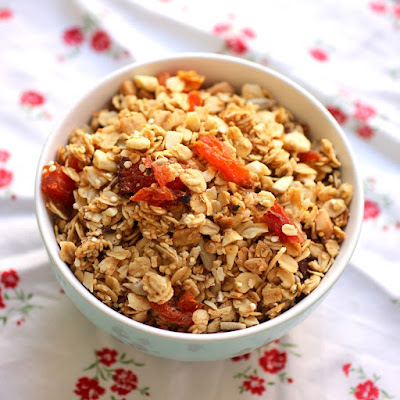 I had found myself happy to eat the chocolate muesli with plain yoghurt.  With the tahini muesli I am eating more yoghurt and less muesli so I find that I need a drizzle of yoghurt as well.  I also like to add some fruit if I have any about.  The muesli came with us on holidays and was a fine travel companion.  Easy to transport and a great way to start the day.  Especially when served with a peach and mango yoghurt. 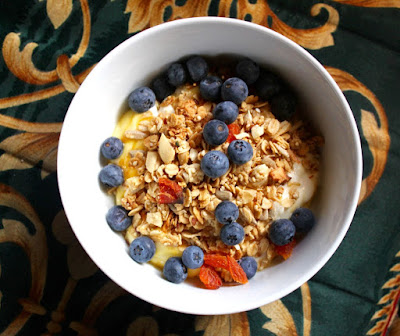 Muesli is a fitting recipe to post on World Food Day.  It is one of my strategies for using up bits and pieces of nuts, seeds and dried fruit that otherwise would go to waste.  In fact, sometimes it seems anything goes.  I put some dried quinoa in this muesli (thanks Joanne) and also have recently seen Jules using psyllium husks in hers. 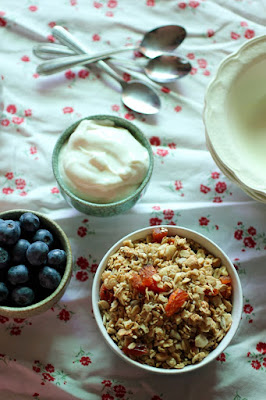 World Food Day is an opportunity to reflect on food waste and sustainability.  The food waste is staggering (for example see the infographics on Helpling or Food Wise).  In Australia on average, each household throws out 345kg of food per year.  Food waste means more carbon emissions, more landfill and unnecessary resources being used to product food.

I have reflected on my week and it is not all good.  I bought watermelon a couple of weeks back and went to use up some of it only to find it was covered in a yellow slime.  A couple of tomatoes I was about to use had gone mouldy.  The remains of a bunch of parsley was yellowing at the bottom of the fridge.  It can be a challenge to find the balance between eating enough good food to encourage us to eat well and not so much that it finds its way to the bin.  Not to mention the food Sylvia rejects.

But it is not all bad.  I have also found some ways that I have rescued food before it got to the bin.  I have: 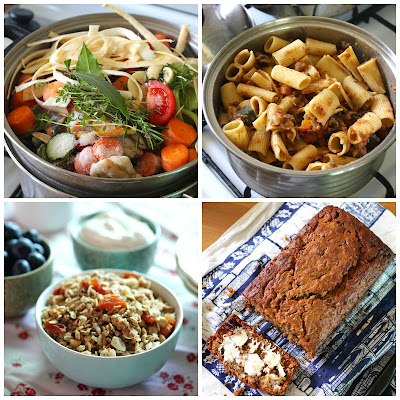 I am sending this muesli to Kimmy for Healthy Vegan Fridays, to Kate (on behalf of Elizabeth) for No Waste Food Challenge, and Mandy for Cook Blog Share.

More posts on Green Gourmet Giraffe about reducing food waste:
Back when we had a compost bin
Making nut balls using leftovers from crumbing tofu
The herbs and citrus in my garden
Making vegetable stock using vegie scraps
A soup using neglected greens

On the stereo:
My Head is an Animal: Of Monsters and Men
Posted by Johanna GGG at 13:42