In My Kitchen August 2015 (recipe testing and apple pie) 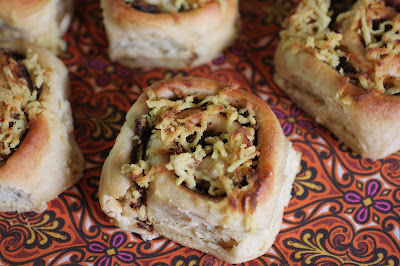 August seems to find me busier offline than ever.  Which means my blogging energy is on the wane.  Don't worry!  I am not about to give it up!  I just am finding it tough with not enough natural light in a cold dark winter in the first year that it is really mattering to me since I started blogging.  I have borrowed a light box from my brother but need to find time to work out how to use it.  I am still trying to sort out the space issues with photos on my computer, as well as being kept busy with a whole host of other activities.  Including recipe testing which is taking some of my blogging energy.  Then there are the recipes that just aren't ready for a full post!  Like the apple pie that needs further work.

Let me start this month's peek into my kitchen with a taster of my recipe testing.  I was so excited that one of the recipes for the cookbook by Leigh Drew that I got to test was a batch of vegan cheeseymite scrolls.  They were so good.  Sylvia ate one when it was warm and then refused to eat them once cooled on the grounds that they were "too vegany".  I was so in love with them I could have cried when they were all gone. 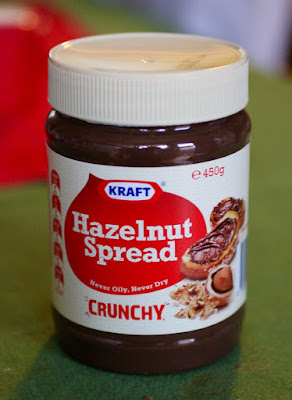 I was intrigued at a Kraft version of Nutella.  We all loved it.  E thought it superior to Nutella.  I found that it could be eaten from the spoon.  Sylvia was impressed at adding it to a smoothie. 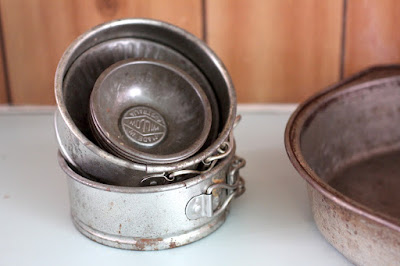 Recipe testing has had me looking out all sorts of equipment I don't usually use.  I have purchased a new frypan that can go from stovetop to oven.  However I didn't buy pie tins because I have this motley assortment of pin tins from my late maternal grandmother.  I photographed them with a 20cm cake tin beside them to show just how little and cute they are. 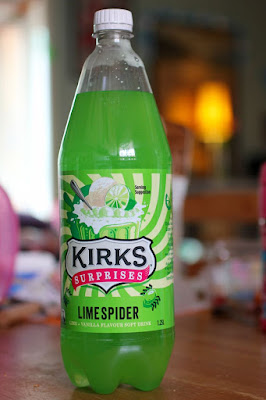 Lime spiders are a Christmas tradition in my family.  So when I saw this lime spider soft drink sentimentality gave way to pester power and I bought it for Sylvia to share with her friends at our Christmas in July lunch.  I had a small taste and it was just sweet lemonade without any of the fun or fizz of a spider. 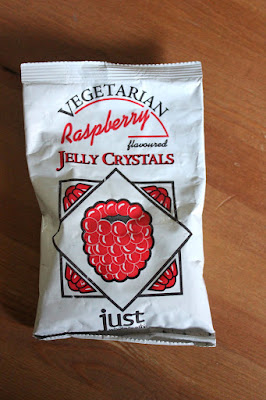 Another disappointment in the kitchen was this vegetarian jelly.  I am not a huge fan of jelly but Sylvia loves it.  So during a kitchen clear out I found this packet that was best by 2010.  I mixed it up and it never set properly.  Unfortunately because it was so many years out of date I am not sure if that was the problem and I wonder if I should buy more to check.  Sylvia loved eating the swampy jelly and would be happy to test taste! 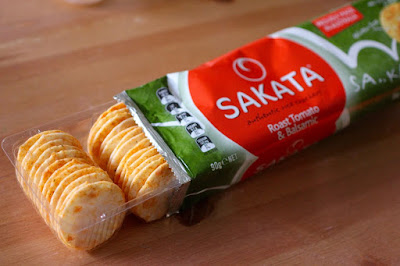 Not all has been awry in my kitchen.  This packet of Sakata Roast Tomato and Balsamic rice crackers was bought on the recommendation of Kari in her July In My Kitchen post.  We consume a lot of rice crackers here, mostly seaweed.  Kari said that these are her favourite so I wanted to try them.  Sylvia and I were most impressed.  They are part salt and vinegar and part bbq and 100% delicious. 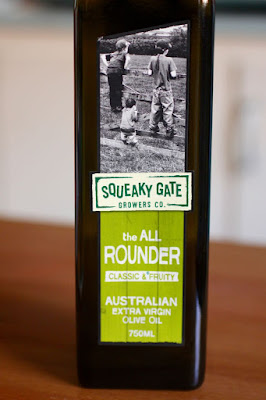 I am not a connoisseur of olive oil.  I love the stuff but don't use a lot in recipes.  However I do love to support a local company.  So while I was entertained by the label on this bottle, the clincher was that the company's address was close to where I live.  Then I was disappointed to read their website and find it full of marketing guff without any real information about the company.  I am yet to open the bottle so I can't tell you much more about the actual oil but it does have a cute photo on the label! 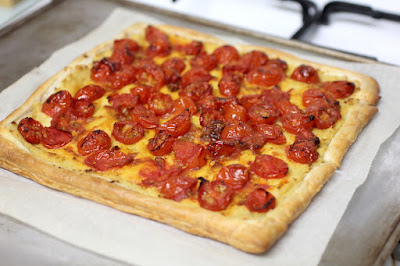 A few weeks ago I had a friend of Sylvia's over and made this tart while they played.  It was a triumph of leftovers.  Pastry that was clogging the freezer, the remainder of a vegan cheese sauce, some cherry tomatoes on the turn, and some leftover sun dried tomato butter.  I fried the tomatoes in the butter til soft and most of the liquid was absorbed and baked them on the cheese and pastry.  It was delicious and was a good snack for the kids.  I think Sylvia preferred the crusts! 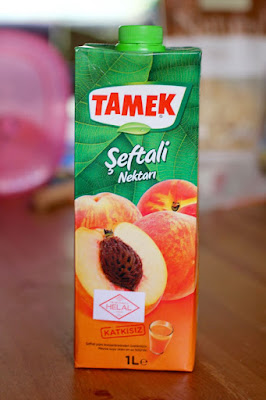 It is the time of year when fresh fruit is not at its best (though I bought 3 punnets of strawberries for $6 today) so we have been having lots of smoothies.  I really enjoyed this peach nectar in a smoothie with banana, orange, strawberries, passionfruit and soy milk. 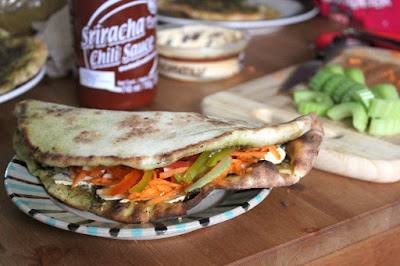 On the weekend I made overnight sourdough bread but it was too cold for it to rise enough to be ready to bake by lunchtime.  Instead I bought some zaatar pizzas from Zaatar on the way home and filled mine with hummus and vegies.  E had Sriracha on his which is his new favourite hot sauce.  The price of the pizzas has risen from $1 to $1.30 but it still makes for a cheap and delicious lunch. 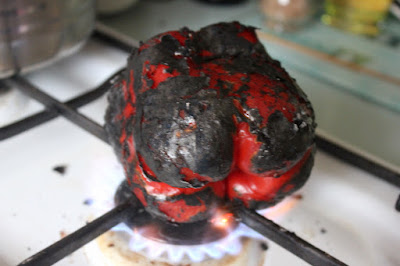 Finally I want to reflect on our meal on Saturday night.  I thought I would make something simple for the main course so I could make apple pie.  It still took me from 4.30 to 7.30 to make dinner.  To be fair, I did spend time speaking to my mum on the phone, getting Sylvia's dinner, breaking the sugar container, and generally organising other things around the house while I made dinner.  There is no such thing as making dinner with no distractions at my house.

Above is a capsicum that I chargrilled over the gas flame because it seemed quicker than roasting it.  I was following a recipe from Ottolenghi for Marinated peppers with pecorino.  I wasn't too impressed with this dish because the marinade was too garlicky.  However I changed so much - chargrilling, no watercress, less cheese and less herbs - that I don't hold Ottolenghi responsible.  I still have some marinated peppers to use in another dish. 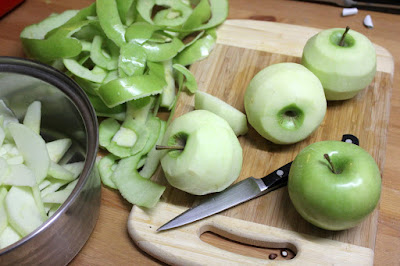 I had some shortcrust pastry in the freezer so I decided a pie would be easy as stewing them is pretty straight forward.  However chopping up the apples took quite a while.  I stewed up about 8 granny smith apples (give or take what Sylvia could swipe from the chopping board) with 1/4 cup castor sugar, 1 tbsp brown sugar, a shake of cinnamon and juice of half a lemon.  I cooked them until mostly soft and they then cooked to a lovely soft filling in the pie, though I wondered if they should have had held their shape. 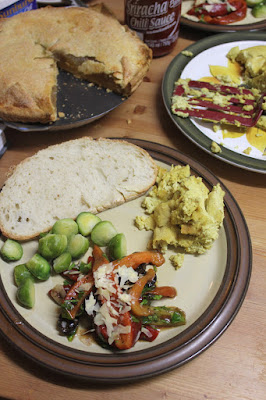 I had decided to serve the marinated peppers with fresh bread, brussels sprouts and tofu besan omelet.  The omelet was meant to be a matter of quickly whizzing up ingredients but as I used a firm tofu instead of a soft one, I found myself having to add lots of milk to reach the right creamy consistency.  Then there was more mixture than usual and it stuck to the bottom of the frypan.  Usually my omelet slides out like a golden disc but this one was a mess on the plate.  It still tasted lovely and the leftovers were eaten in a sandwich and then on mee goreng.  In hindsight scrambled besan would have been quicker. 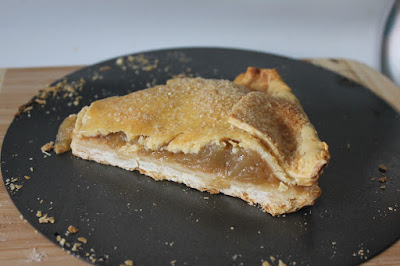 For dessert we had a slice of apple pie.  The filling was lovely but the pastry was not quite right.  I think part of the problem was that I was using supermarket pastry rather than making my own.  I had some pastry scraps that I rolled out but you can see they were still quite thick on the bottom.  I prebaked the bottom for about 10 minutes which shrunk from the edges and then I couldn't pinch together the top and bottom around the edges.  Brushing the top with milk and sprinkling with sugar was good as the pastry was not sweet.  I baked it for about 40 minutes at 180 C which I think was right and might have been ok if I had not prebaked the bottom.  More experiments are required.  (Hence my recipe notes here to refer back to.)

I had asked E to buy ice cream for the pie because I knew he and Sylvia would like this.  He was in a rush and bought chocolate orange ice cream.  It wasn't what I would have chosen but they enjoyed it.

I am sending this post to Celia at Fig Jam and Lime Cordial for her In My Kitchen event.  Head over to join in (by 10th of each month) and/or check out what is happening in other bloggers' kitchens. Celia usually has the links to other In My Kitchen posts on her side bar but she has some other pressing issues this month and has asked us to scroll down the comments to find links.
Posted by Johanna GGG at 10:34