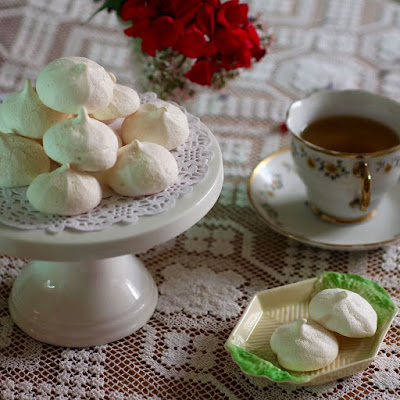 Now that every vegan in the world seems to have tried aquafaba meringues, it no longer seems very novel and yet I had to try it.  For the uninitiated aquafaba is the brine that chickpeas or other beans are cooked in.  The residual protein and starches seem to imitate the properties of egg white.  If you want to see what experiments are in progress, just check out the Vegan Meringues - Hits and Misses Facebook Group.

When I first read about these meringues, my jaw dropped to the floor in amazement.  Yet it took me a while to try it.  In fact it was after having the brine of two consecutive tins of chickpeas sitting in the fridge until it went manky that I decided I just had to try it and stop filling the fridge with old chickpea brine.  Also I remember making maple syrup meringues in summer and how sticky they became in the humidity so it seemed wise to try these in winter. 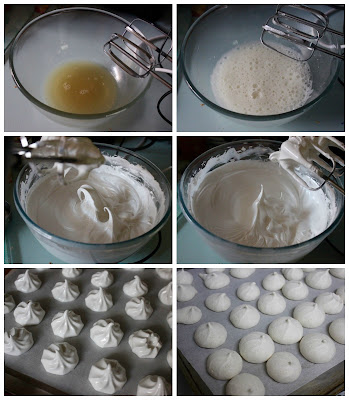 And by jove, I was dumbfounded at the miracle of how much the aquafaba acted like egg white.  I take my hat off to the genius who created this.  My mum makes pavolvas a lot so the taste of the beaten egg and sugar is a taste I remember fondly from my childhood.  I am not a huge fan of meringues but E and Sylvia love them.  I took some meringues to my parents' house and they were similarly amazed at the meringues.

The meringues were crisp all the way through.  While cooling on the tray I could hear a little crackle and they were ever so slightly cracked.  Perhaps they needed to cool slower in the oven?  On the first day I made them they tasted a bit beany but the next day the bean taste was undetectable.  By day 6 they had become chewy in the middle but were still edible. 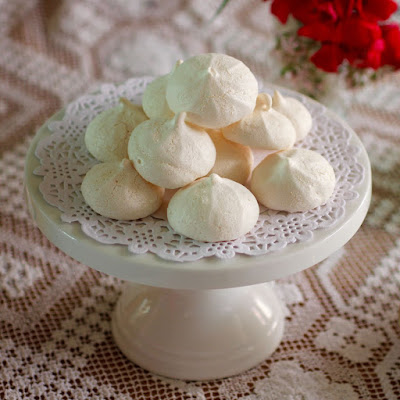 Now that I have had success with aquafaba, I am keen to try it in other recipes.  Sylvia just loves pavlova so I guess I should try a pavlova though I had heard from others that this is harder with aquafaba than meringues.  I also would like to try it with maple syrup after making maple syrup meringues in summer.  So much experimenting to do.  Thank goodness we love chickpeas!

Aquafaba Meringues
From Banana Bloom
Made about 75 meringues

Beat aquafaba until frothy.  Continue beating and gradually add the sugar.  Beat sugar and aquafaba about 5 minutes until mixture is smooth and glossy and you can made stiff peaks with it (also it should stay in the bowl if you are brave enough to hold it upside down).

Spoon or pipe onto a lined baking tray and bake at 100 C (or as low as your oven will go - I did 120 C because my oven is very slow) for about 1 hour or until meringues are crisp.

Cool on the tray.  Keeps about 5 to 6 days in an airtight container.

On the Stereo:
Discography: the complete singles collection: Pet Shop Boys
Posted by Johanna GGG at 12:52