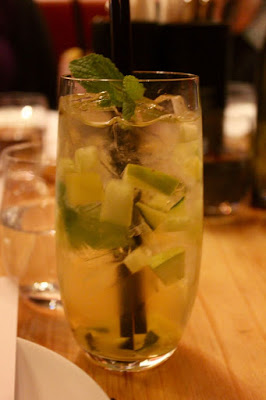 Last Monday I drove through the dark rainy night to meet up with a vegan dining group at B'Stilla for the special vegan dinner.  I was glad to get in from the rain and rushed past Julia deVille's taxidermy display, (which is not my thing).  The restaurant specialises in Morroccan cuisine.  My seat didn't have great light for photography (given it was an 8pm booking in winter) but I liked my view of decorated tiles and painted tangine pots.  The owners also use seasonal and locally sourced ingredients.

Upon perusing the menu initially I was overwhelmed by the four course menu.  Then I saw that as well as offering wine pairing with the meal, there were also some unusual mocktails.  I appreciated some interesting non-alcoholics options and ordered an Apple, cucumber and mint soda.  It was just enough sweetness and wonderfully refreshing. 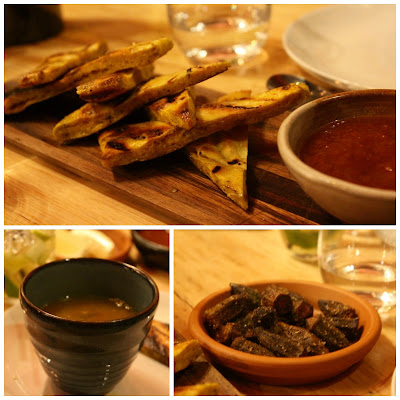 It wasn't long before we were served three dishes for the first course.  I particularly loved the warm Grilled batbout bread with tomato citrus jam.  Then I tasted the Crispy baby okra with zhoug which had a nice crunch on the outside and was pleasingly soft inside.  Others loved it but I found it so spicy that I couldn't eat much of it.

All of the dishes were served in sharing plates in the middle of the table.  The one exception was the small individual bowls of Harira Soup with chickpea, ginger, date, celery and lemon.  It was quite thin and light but was lovely with the harissa and lemon wedges that were served on the side.  I appreciated that we were choose how much of the spicy harissa to add, to allow for varying tolerances to chillis. 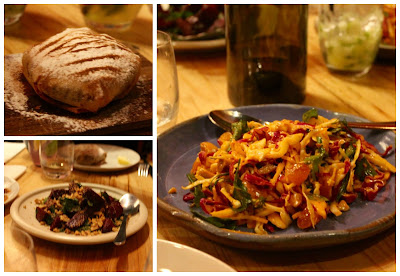 The star of the show was the B'stilla stuffed with eggplant, pumpkin, cinnamon and saffron and accompanied by salads. The organiser of the dinner, Rosalie, informed me that traditional B'stilla (from where I gather than the restaurant takes its name) is pigeon in brik pastry.  Our vegan b'stillas was dusted with cinnamon and icing sugar.  It was served with Spiced roasted beetroot, green charmoula and walnuts, and Morroccan slaw with almond, apricot and chilli dressing.

This dish was memorable because the B'stilla pastry was so hard to cut through, the slaw was served on such a pretty plate, and it is unusual to have a slightly sweet main with such savoury dishes on the side.  I've never eaten a less sweet beetroot dish.  It was very early and lovely with the crunchy walnuts.  The B'still filling was meltingly soft with pastry shards falling around it.  I didn't take enough notice of the slaw but it went well with the meal and I didn't find it particularly spicy. 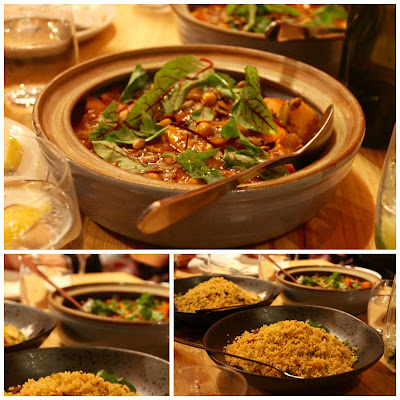 I don't go out for evening meals often and usually consider it fancy if I push the boat out to two courses.  So after two substantial courses, I felt quite full and ready for dessert.  I was surprised to find we still had a a huge dish of Root vegetable tangine with chickpeas and pumpkin seeds and a pile of Steamed couscous.  I really enjoyed it and loved the crunch of the seeds but this was the least impressive course.  I suspect I had had my fill by then but it also felt more like the food I make at home. 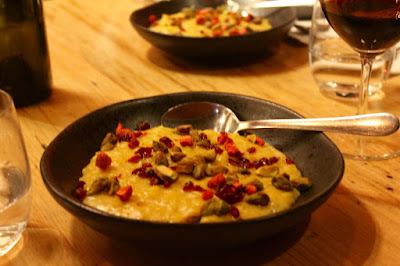 I did not expect to love the dessert of Saffron rice pudding with barberries and pistachio.  Rice pudding is generally not a favourite of mine.  However this one was superb.  I loved the warm spices and the tart dried fruit in it as well as the crunch of the nuts.  It also looked really pretty. 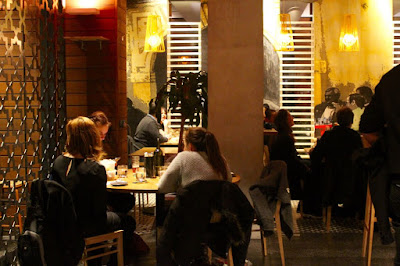 Overall I really enjoyed my meal.  It was delicious with lots of unusual flavours and ingredients.  The service was great and the atmosphere was warm and welcoming.  At $45 for four courses, it was excellent value.  No doubt this is the sort of value that has found B'stilla named as the Age Good Food Guide Best Restaurant Under $30.

I also really enjoyed the company, with most interesting conversation on zeitgeist vegan issues such as aquafaba meringues, Ikea vegan meatballs and dehydrated potato flakes in vegan egg sandwiches.  It should be noted that B'stilla is not usually open on Mondays and this special meal is not from the regular menu.  However upon perusing the online menu there are some similar sharing dishes that would suit vegans and vegetarians.

Also see other blog posts about our dinner by fellow bloggers, Rosalie at Quinces and Kale and Cindy at Where's the Beef.