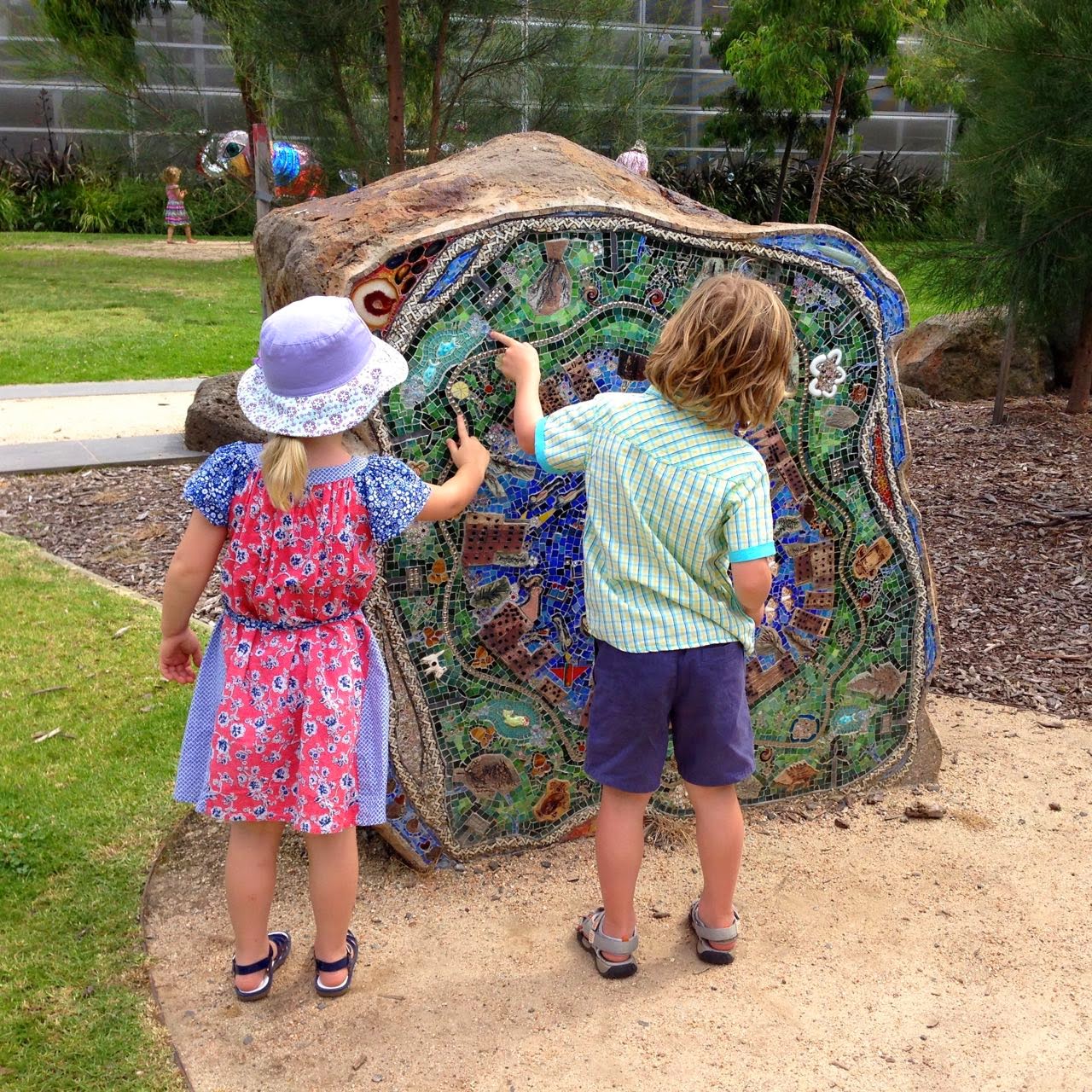 School goes back on Thursday.  We have been enjoying the summer holidays but I need a break.  Yesterday was a crazy day.  We had a big day out at the park, doing craft, riding the big wheel, eating churros, my first visit to Costco, dropping Sylvia off for a sleepover, dinner at the Moor's Head and finally an Amanda Palmer book reading. 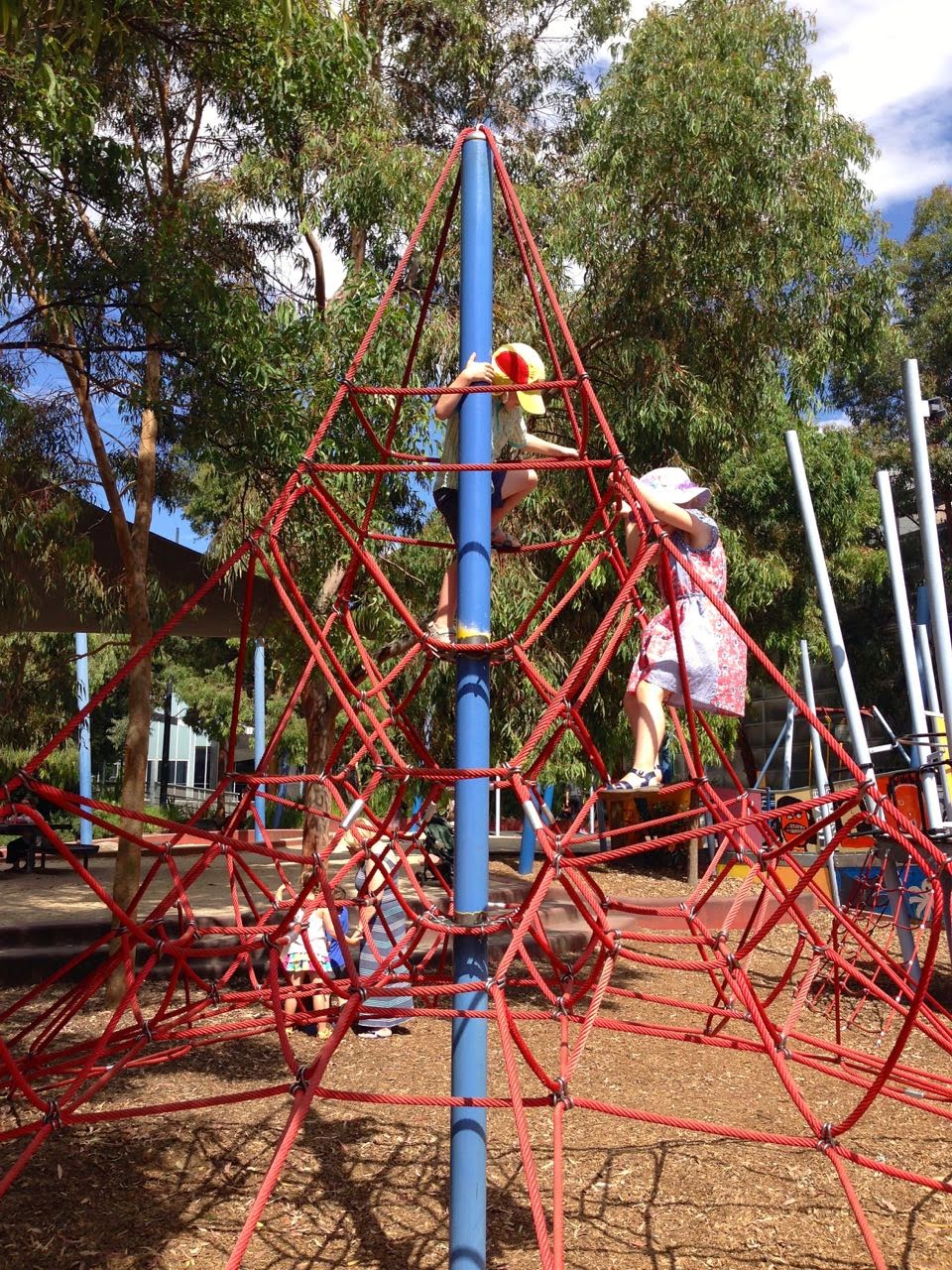 We took the train to the city and met my sister and nephew at Birrung Marr so Sylvia could have a play at the park with Dash.  The climbing frame was very popular. 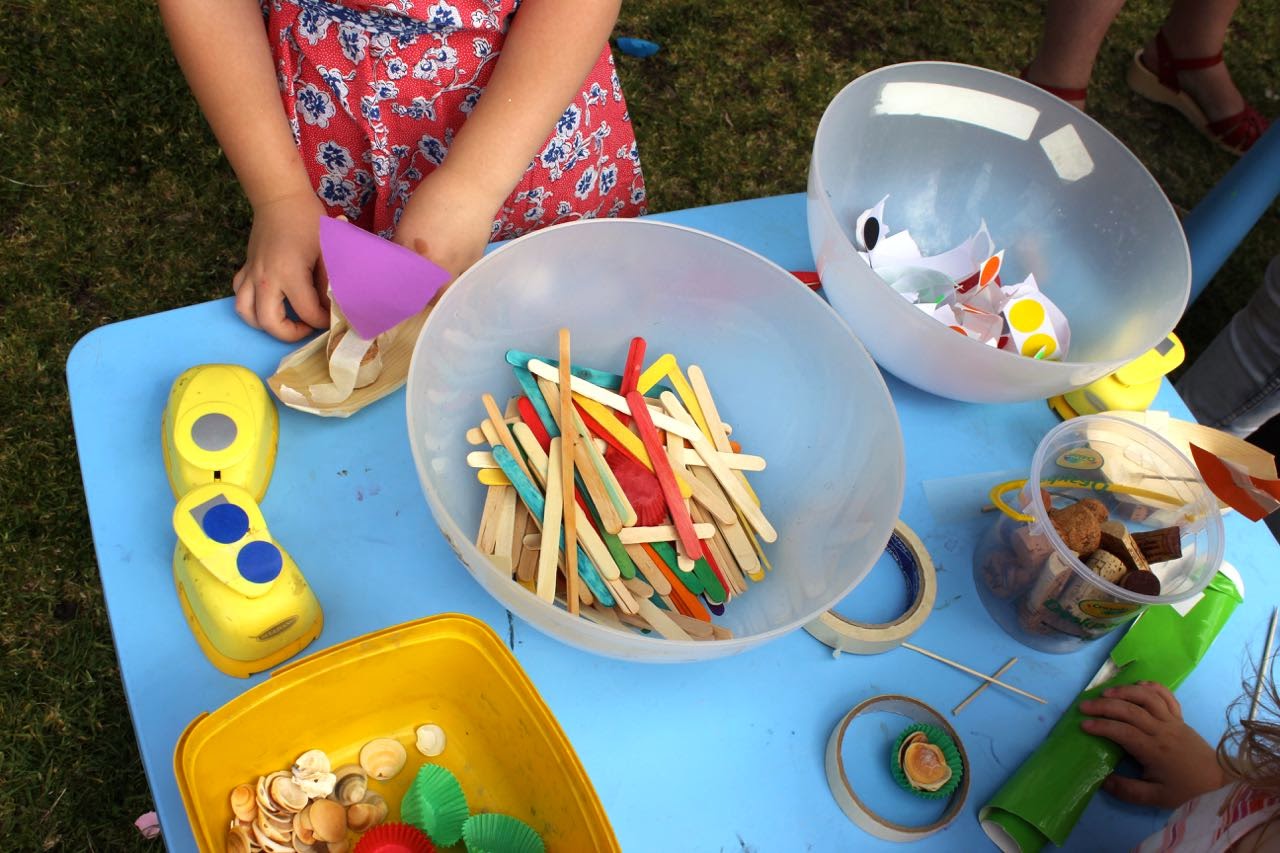 Then my sister found that there was a kid's craft tent nearby where children could make little boats to float in the wading pool.  So that's what you do with all your leftover corks! 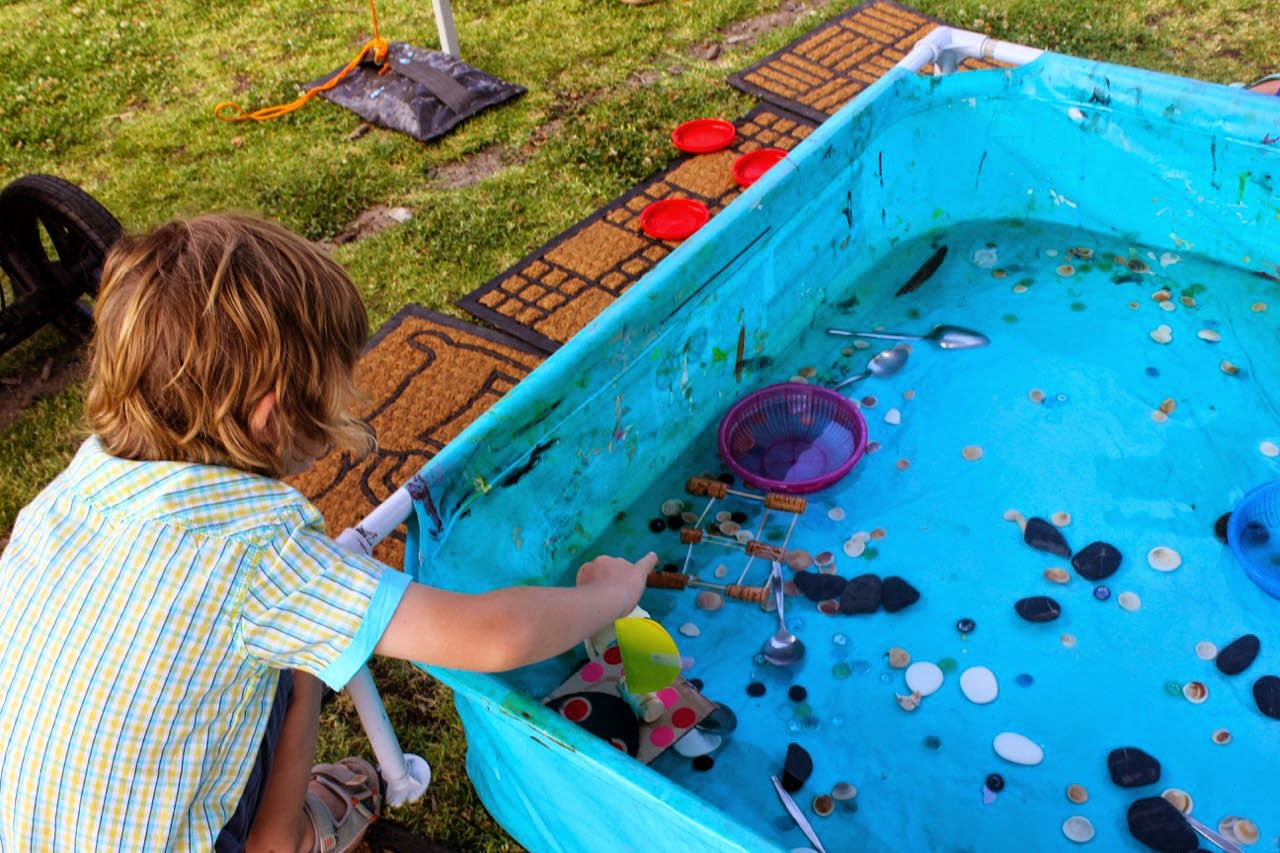 Sylvia and Dash had a lovely time.  It was really nice to be able to do craft outdoors.

Then we headed off for the tram to meet up with more family and leave Chris to head off to meet up with friends.  We were sad to say goodbye.  It's been lovely to have her visiting from Ireland and Sylvia says she will miss Chris's makeup. 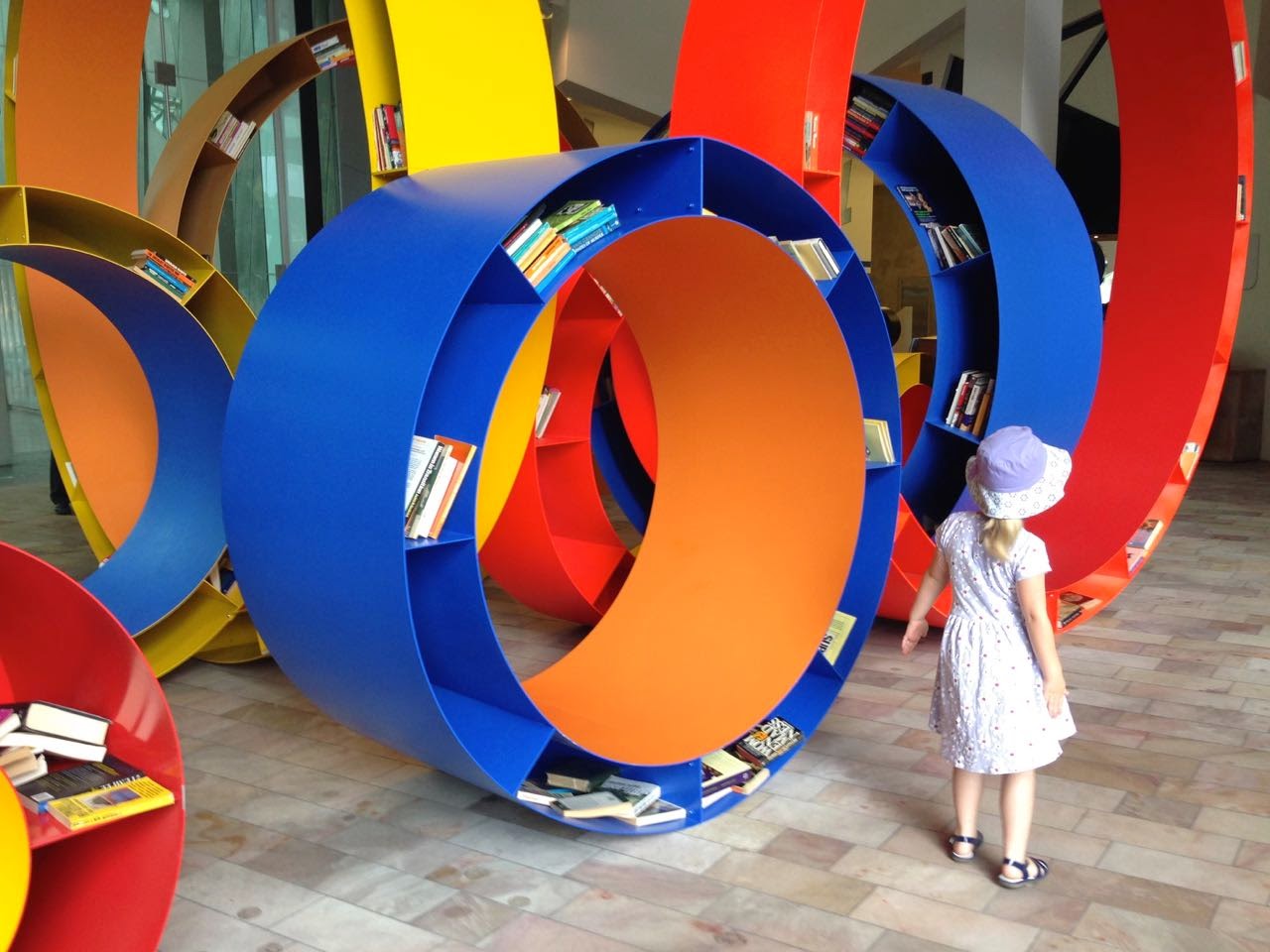 On the way to the tram we passed the fun circular bookshelves in the foyer of the NGV Ian Potter Gallery.  (If you have an eye for detail you might notice Sylvia has on a different dress.  This photo is from when we saw Arriety at ACMI Cinema.  Fantastic movie.)  We could have spent lots of time at the bookshelves but the Big Wheel beckoned. 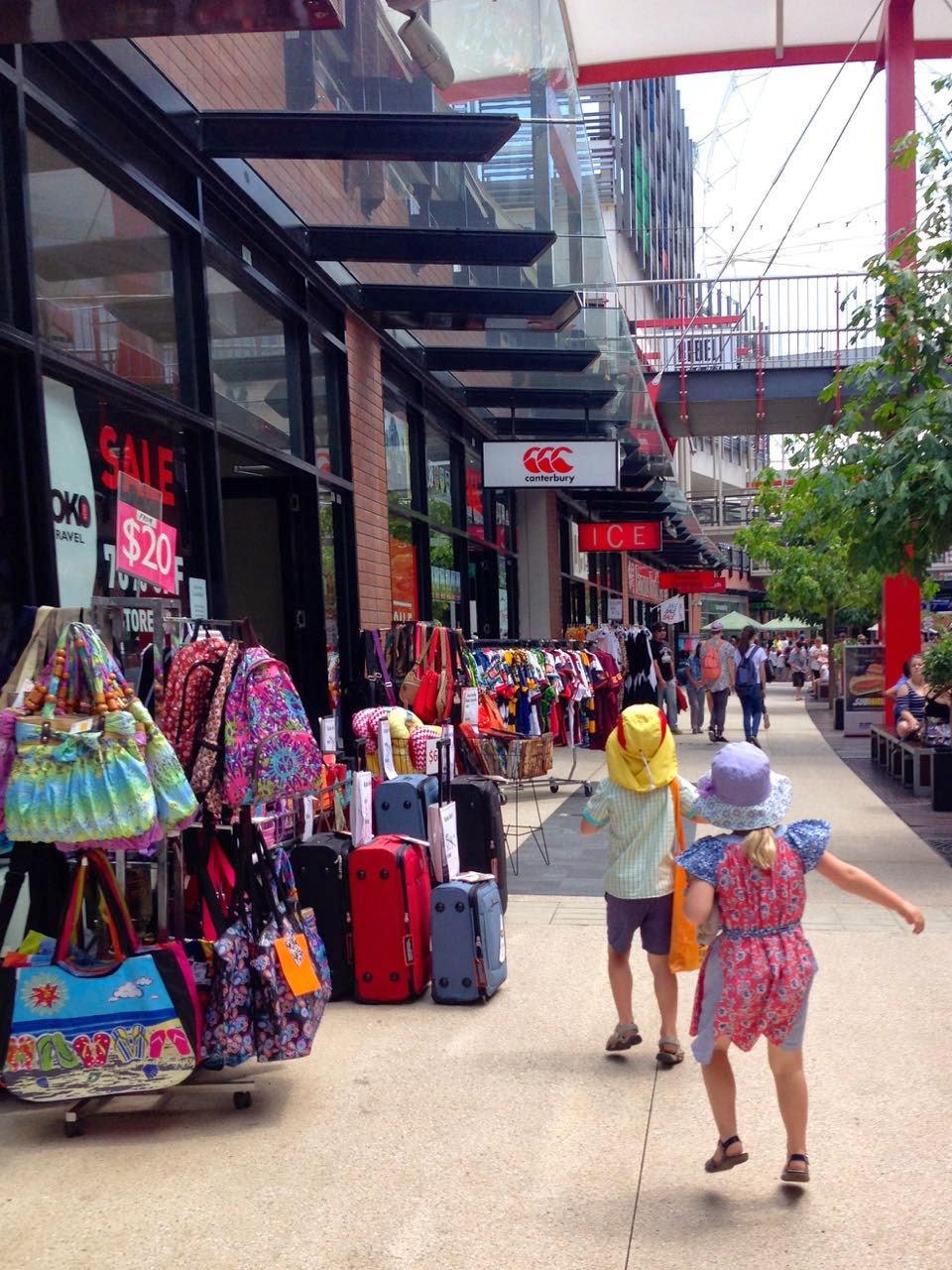 So I took Sylvia and Dash on the tram to Docklands.  This is a very new part of Melbourne's city where I rarely go.  We walked along the avenues of shops and stopped to stare in fascination at the snake handler giving children a snake to drape over their shoulders for a photo opportunity. 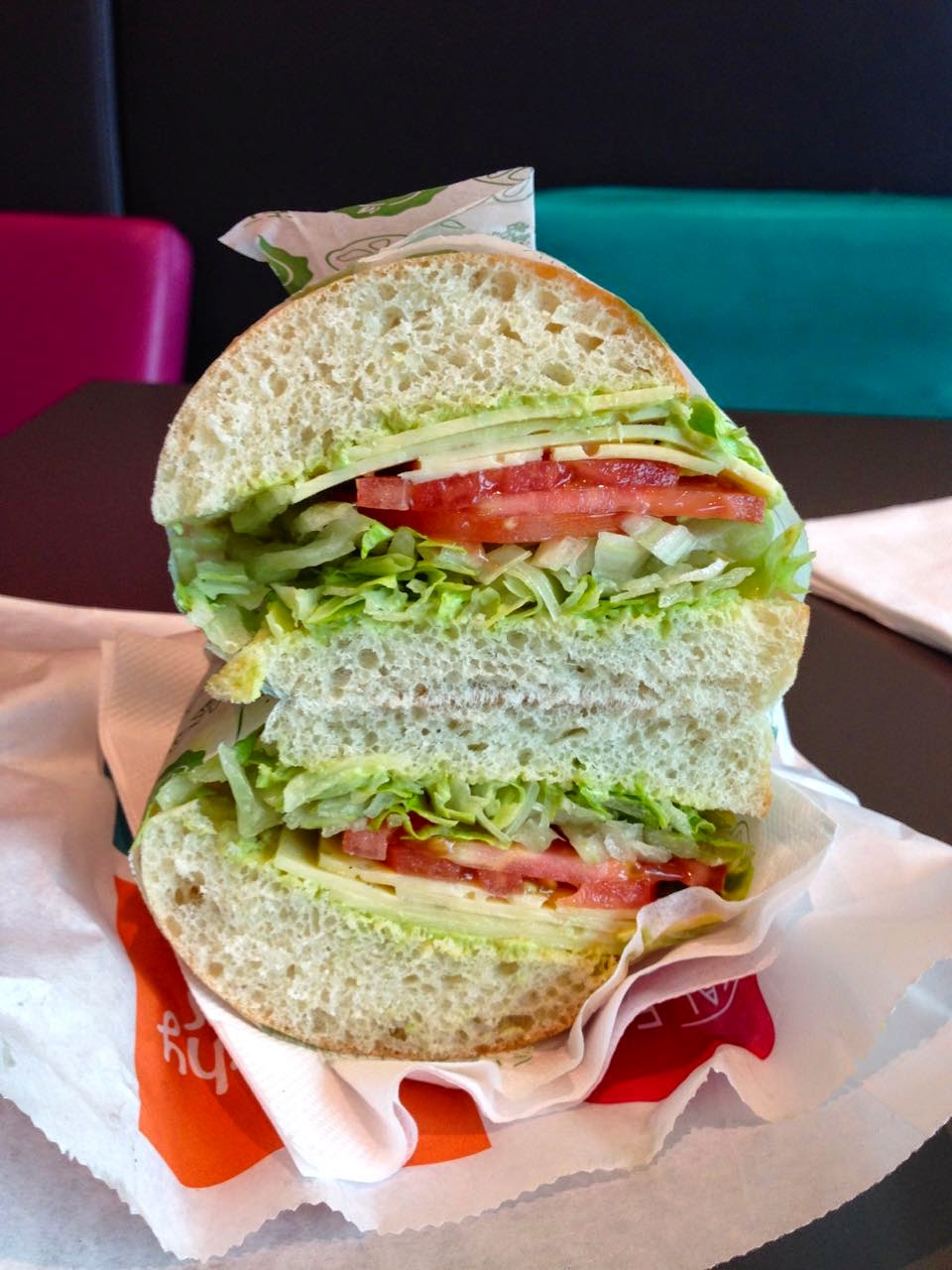 We stopped at the food mall for sandwiches for lunch.  I had my favourite sandwich filling: avocado, tomato, lettuce and swiss cheese.  It was huge. 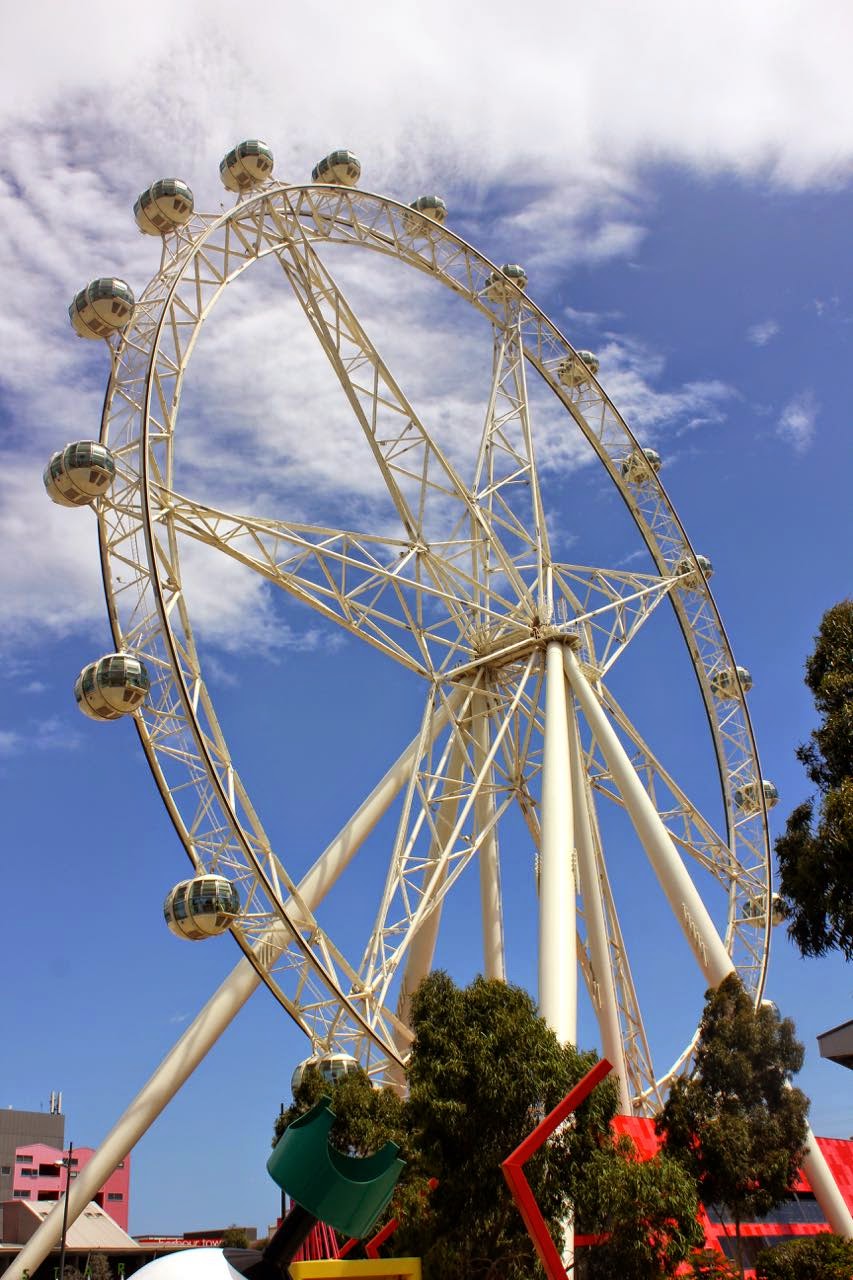 Finally it was time for the Big Wheel.  Actually its proper name is the Melbourne Star Observation Wheel but I hardly hear that used and every time we pass it on the train we just call it the Big Wheel.  It goes so slowly that from a distance it doesn't seem to be moving. 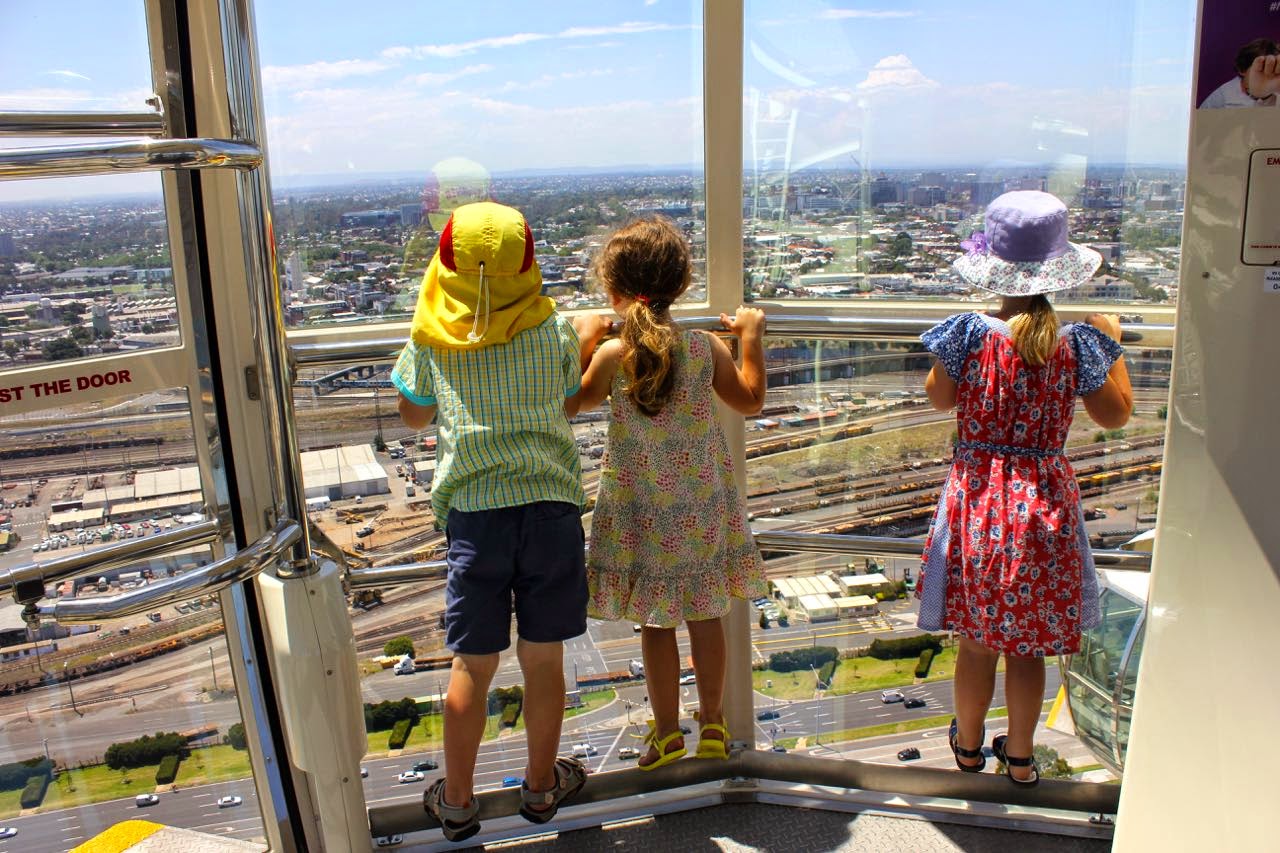 It was my dad's Christmas present but he shared it with everyone.  So there were 2 adults and 8 children in our capsule.  These capsules are very echoey and with lots of kids it was really noisy.  The 30 minutes seemed to go really quickly with all the little dramas of who got the map, which window to look out and Maddy's warnings not to go near the door. 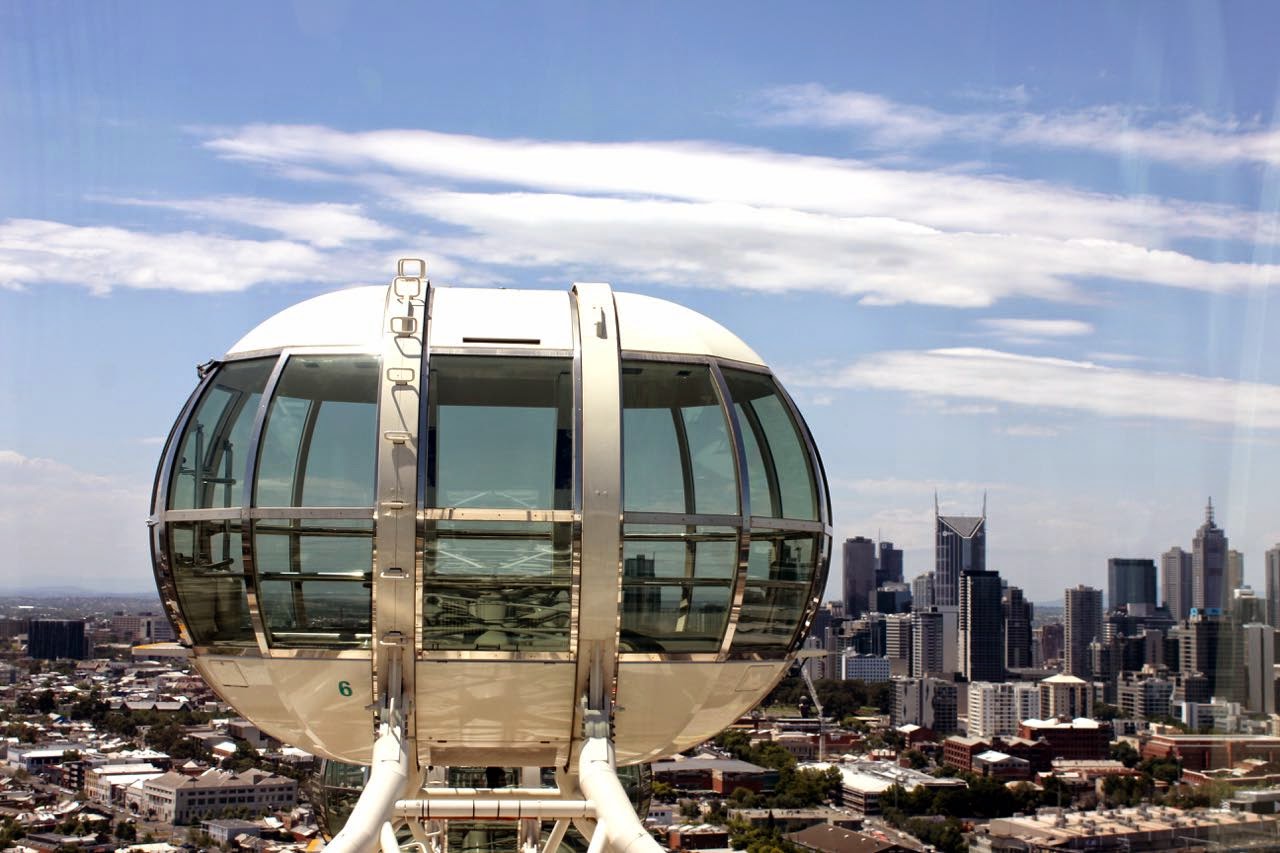 Of course we took lots of photos.  I really loved the photos at the top but we didn't seem to stay on top long.  The Big Wheel is on the more industrial side of Melbourne and was great to see city skylines as well as all the railways, docklands and freeways.  I would recommend the Eureka Tower viewing platform if you wanted to see more of the historic buildings, sports stadiums and the river. 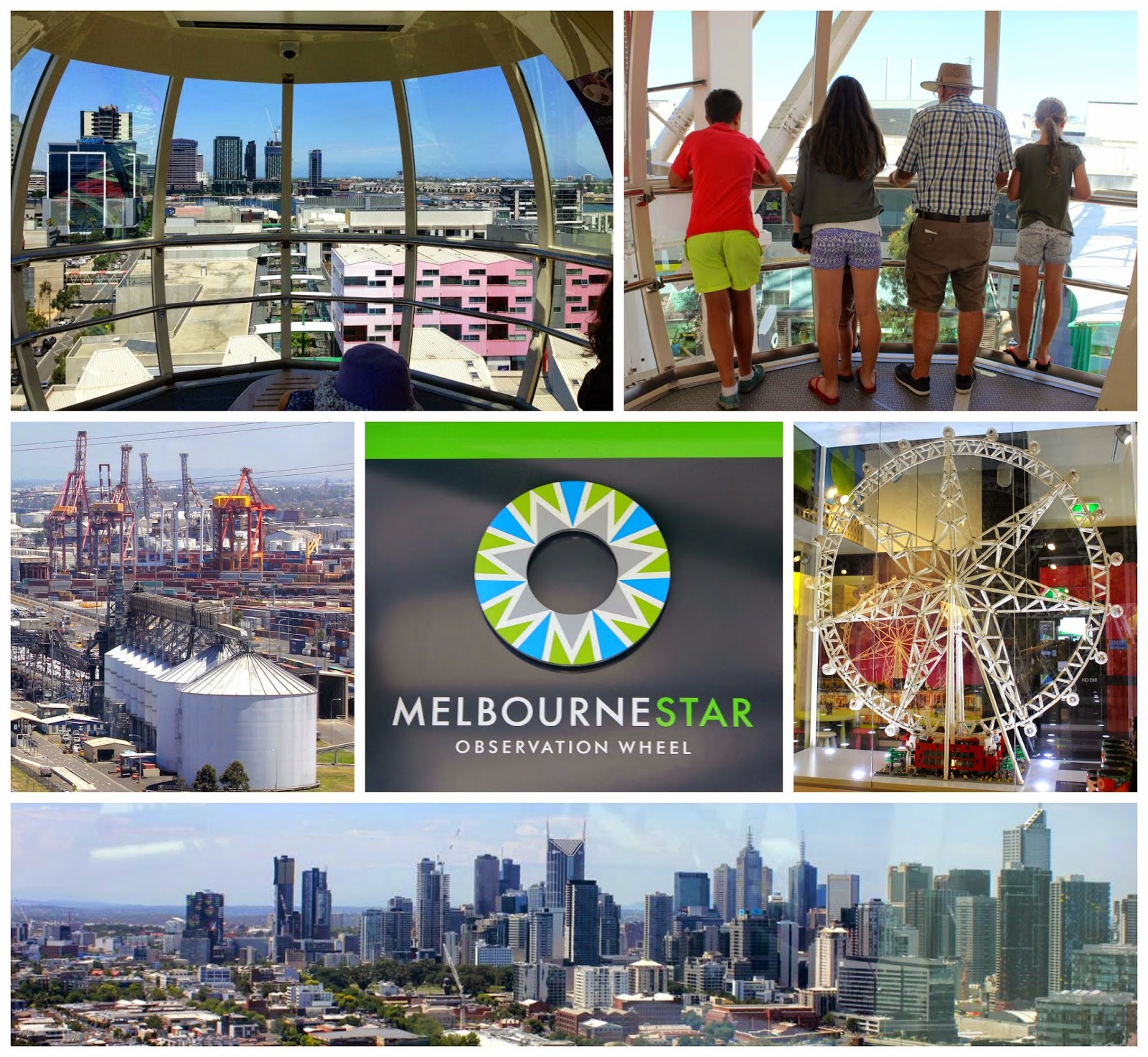 Before long we were stepping out of our capsule.  We were glad it was moving so slowly because it does not stop for disembarking.  The kids all raced through the gift shop and out the exit without stopping to look at what I thought was a lego model of the wheel.  (I would have checked if I hadn't been keeping up!) 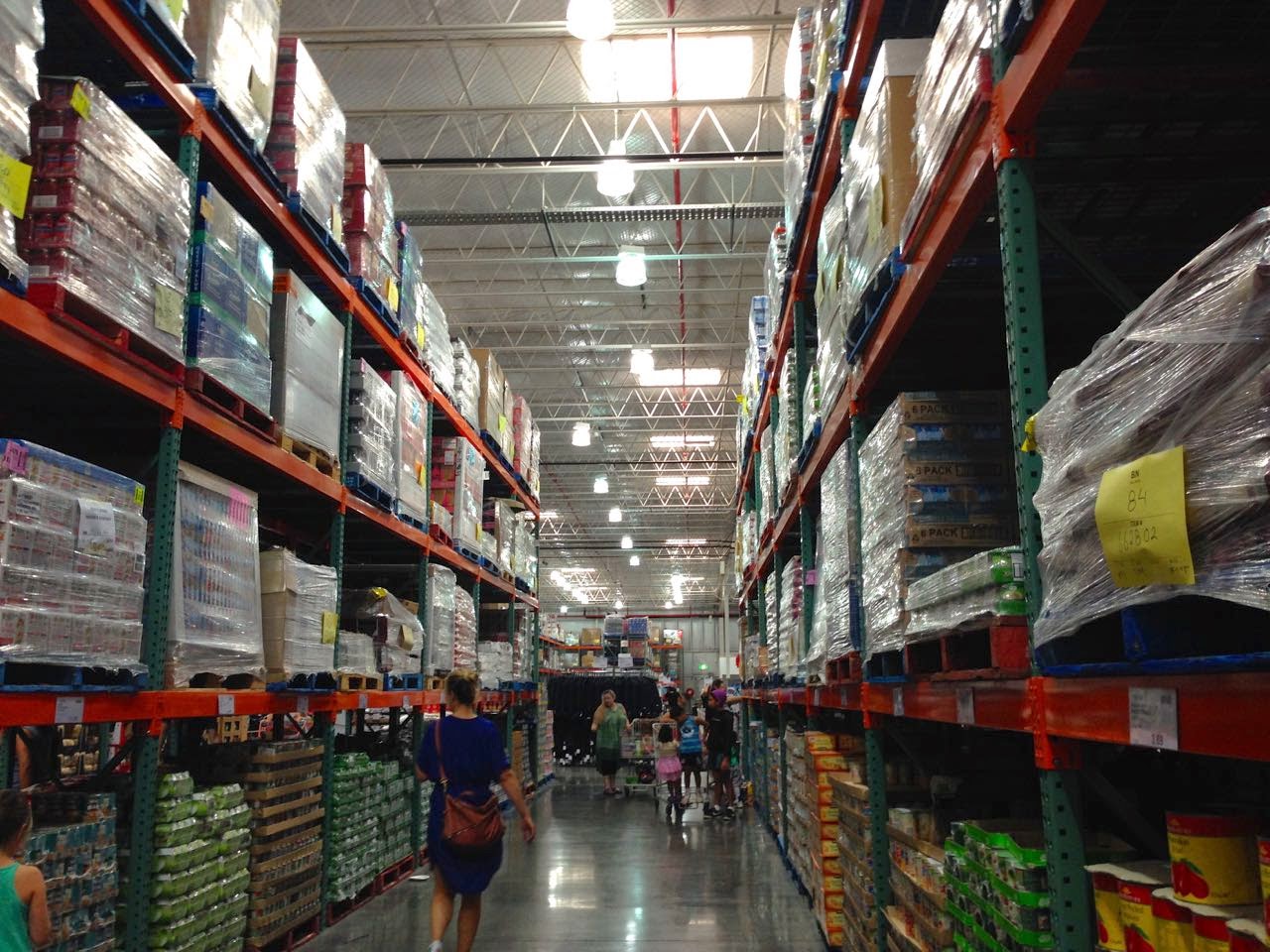 We then had some churros with chocolate at San Churro.  So yummy.  I was talking to my sister-in-law about nearby Costco.  Erica has a membership and offered to take me over to buy some maple syrup.  Which is how I found myself with 2 litres of the stuff in my bag.  I was so excited at how cheap it was that I forgot how heavy it was to carry home.  Oh well!  At least I didn't spend $817 like the person in front of us at the cash register.

Sylvia and I headed home to have a quick play before taking her out to her friend's place for a sleepover.  E and I were going out. 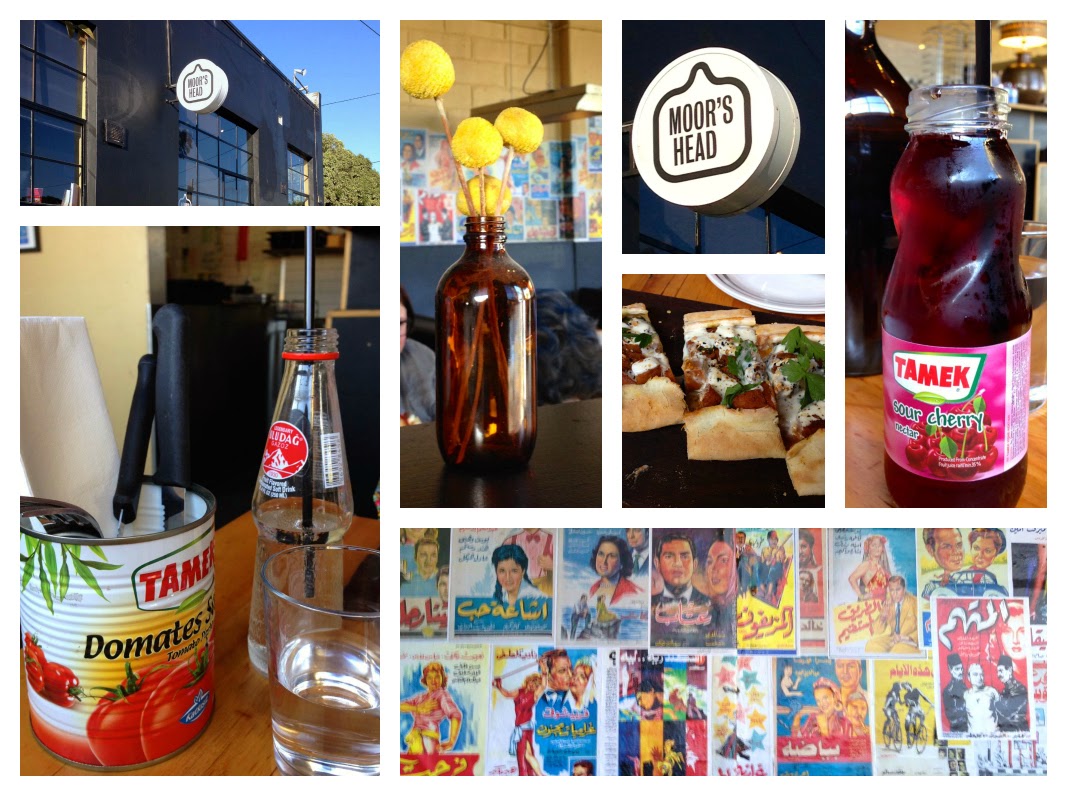 Firstly we had dinner at the Moor's Head in Thornbury.  We arrived at 6pm before our show.  The place was fairly empty but I heard a staff member say it was booked out later in the evening.  The Moor's Head was opened in 2011 by Joseph Abboud of Rumi.  They offer mainly "inauthentic pizzas", made in a Middle Eastern style, as well as dips, salads, and desserts.

I enjoyed reading the names of the pizzas: Omar Sharif, Shams of Tabriz, Beiruti and Fred the Deaf!  There is a choice of round or long Turkish-style with quite a few vegetarian options.   We started with drinks.  E ordered the Uludag Gazos, a Middle Eastern style lemonade.  I had a lovely sour cherry juice. 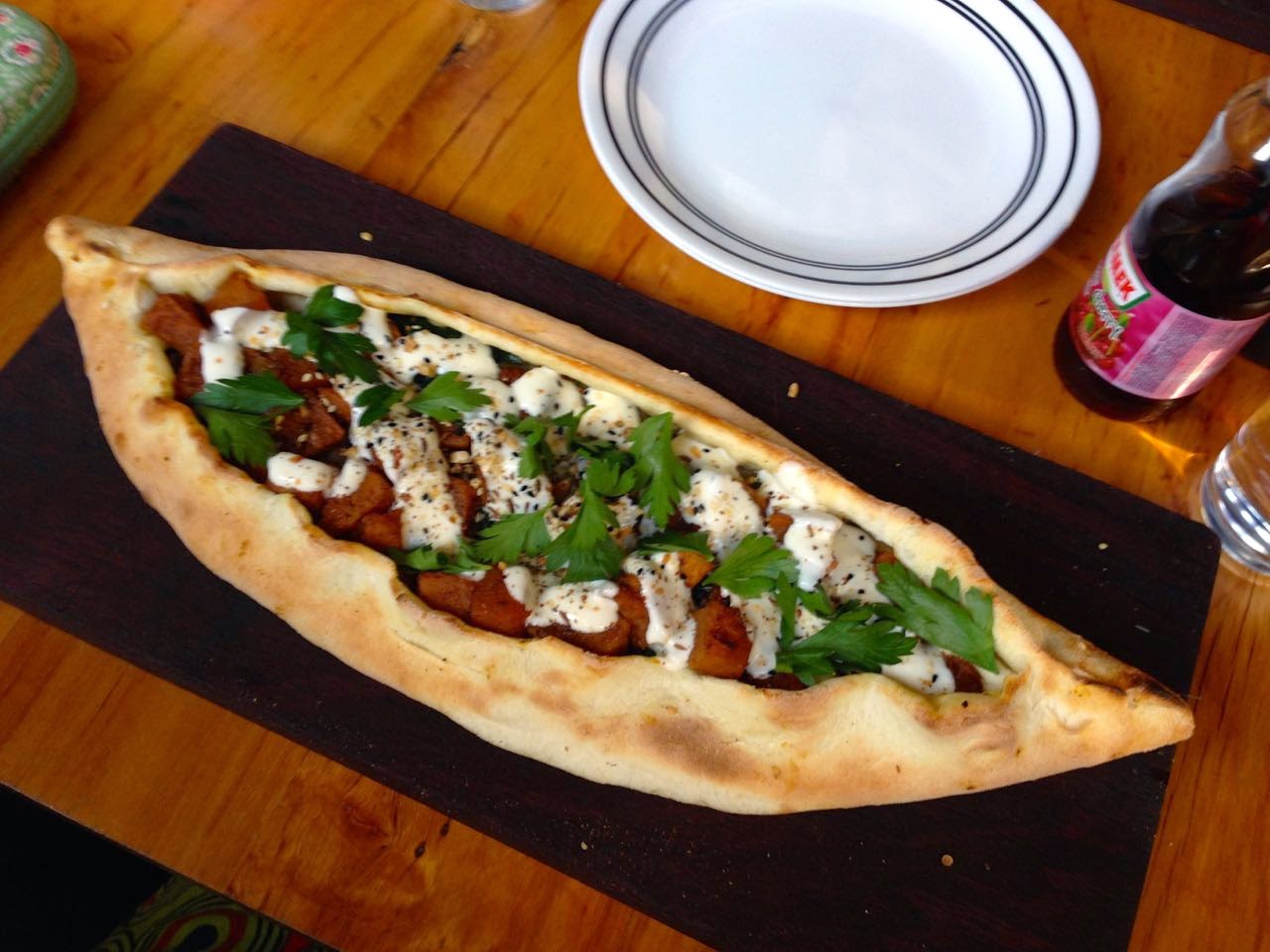 E ordered a meaty pizza so there was no sharing.  I had the Istanbuli pide (Turkish style long pizza with pumpkin, spinach, caramelised onion, tahini yoghurt, dukkah and parsley).  It was lovely with soft Turkish bread around the filling.  It was a lot for one person.  I think I would have preferred half the pizza with some salad.  Despite this, I am never going to complain about eating bread, seasoned pumpkin and tasty creamy sauce. 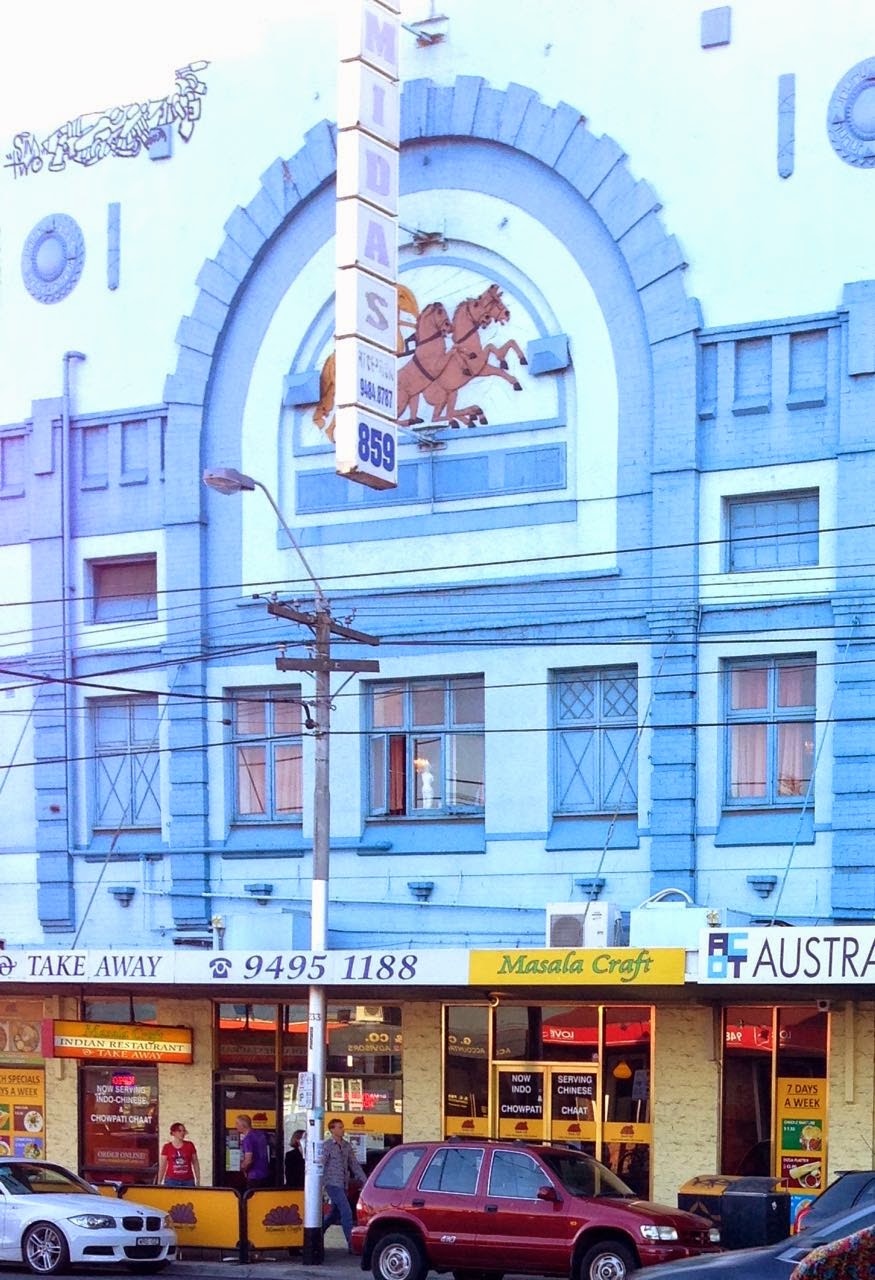 The main event was close by at the Thornbury Theatre.  We went to see a book reading by Amanda Palmer.  She has written a book called The Art of Asking, reflecting on her crowdfunding experience as a musician and how our reluctance to ask for help can paralyse our lives.

At the reading she spoke to local artists, Justin Heazlewood and Tom Dickins about their crowdfunding experiences. her husband Neil Gaiman read some sections of her book exploring their relationship, and she sang some songs accompanying herself on ukelele.  I think my favourite moment was when Amanda and Tom Dickins sang one of my favourite Glen Hansard songs, Falling Slowly. 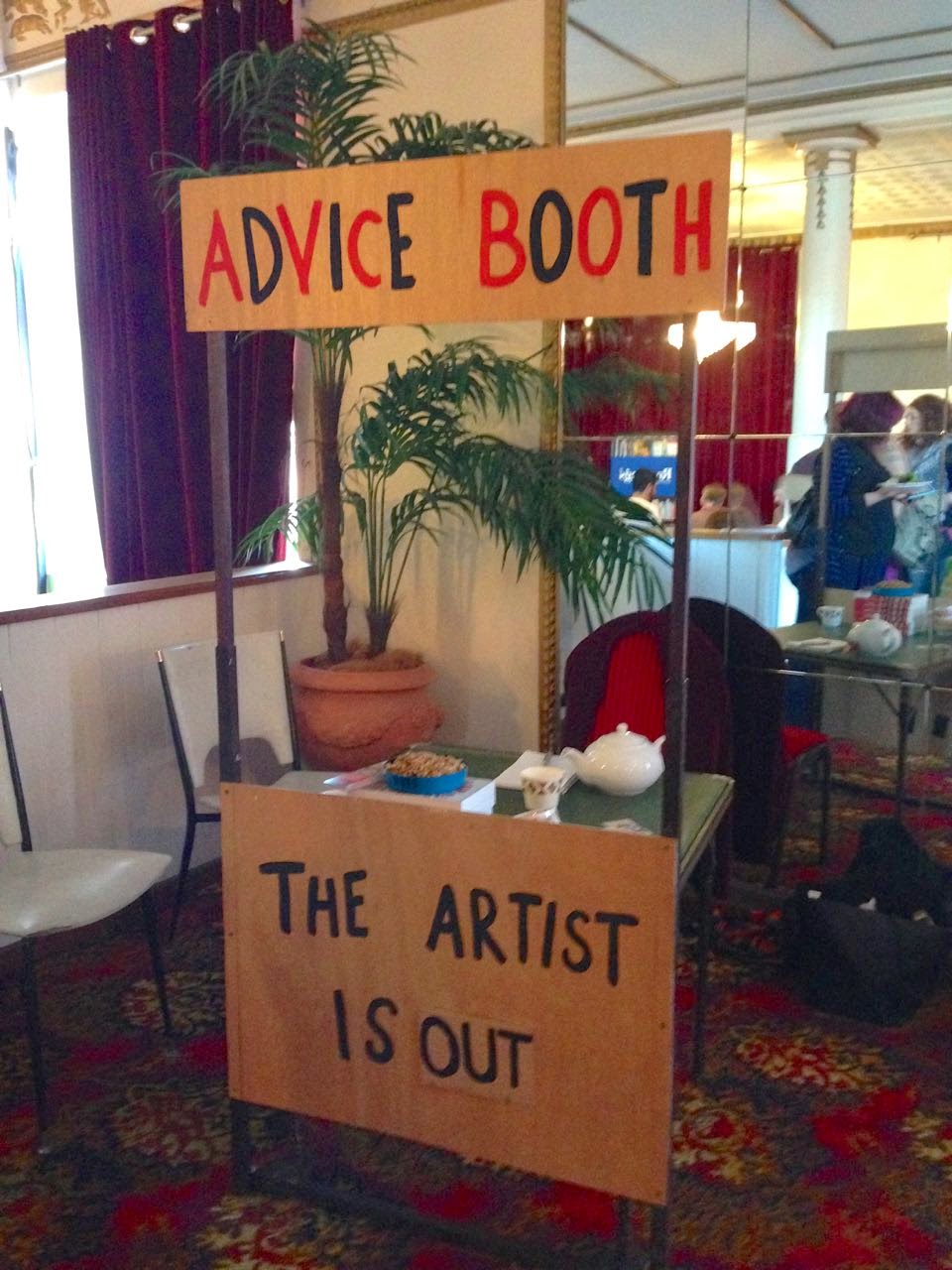 When the gig ended, E wanted to get his copy of the book signed.  I was prepared to wait, despite being a little worried about hearing about Neil Gaiman doing an 8 hour book signing.  The queue for the signing snaked all around the ballroom.  After over half an hour and the queue had not moved, I was tired and went home, leaving E with some friends.  (I was sad I missed Neil Gaiman handing out brownie to people in the queue!)

This morning I woke up tired and achy.  (I got a sunburnt back at the Botanic Gardens on Thursday.)  Then I remembered I totally forgot about my dentist appointment yesterday.  I left a message at their dentist's surgery and will have to ring them again with another grovelling apology on Tuesday.  Meanwhile today has been more restful and hopefully we will get more quiet time over the Australia Day long weekend.