Lego biscuits for the birthday boy 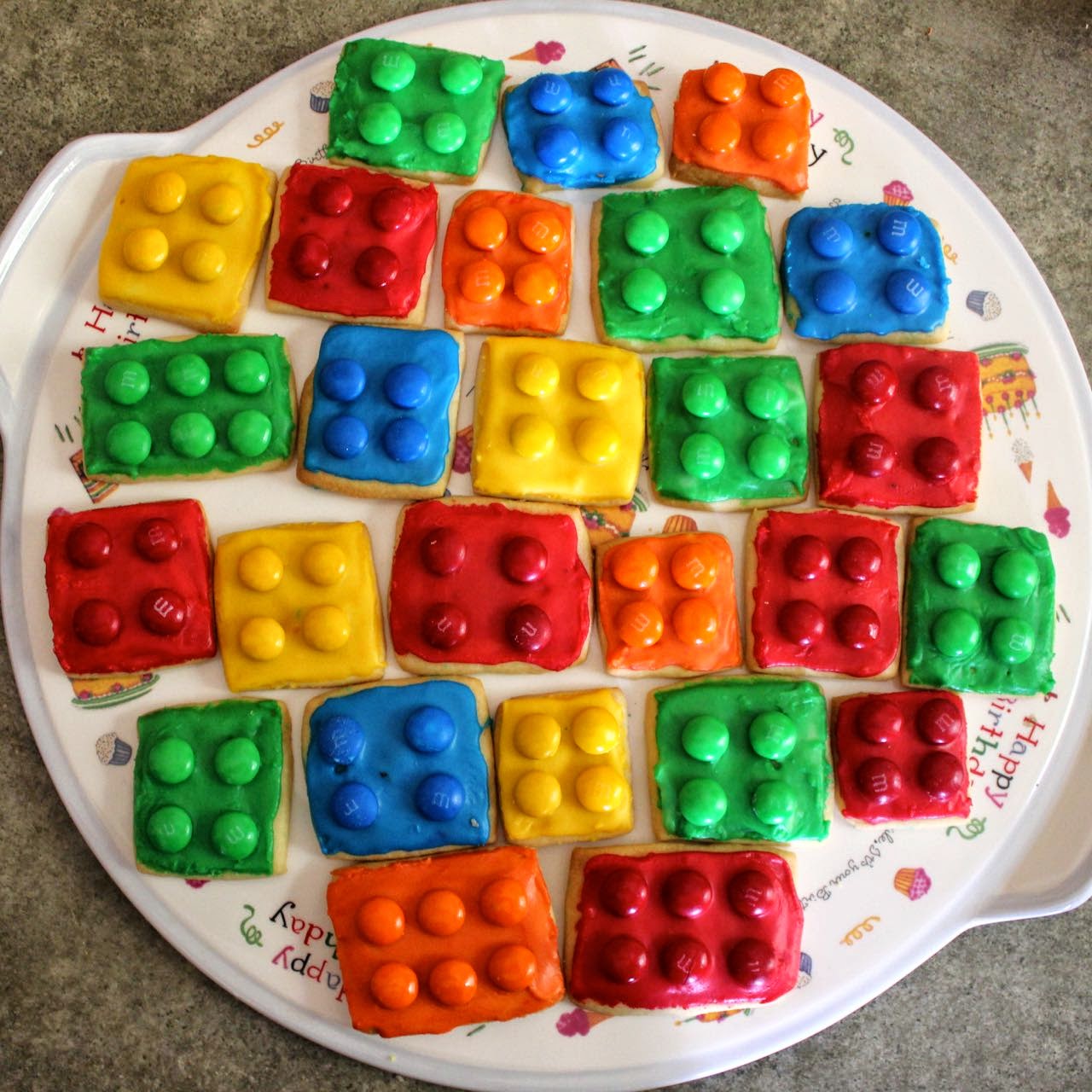 If the weather had been kinder and cooler, I might have made a cake for my nephew's birthday.  It was forecast to be a scorcher (38 or 39 C) and so biscuits seemed more practical.  And I couldn't think of a better theme than lego.  When I was told the day before his birthday that he spent his waking hours doing lego, I felt I had chosen well. 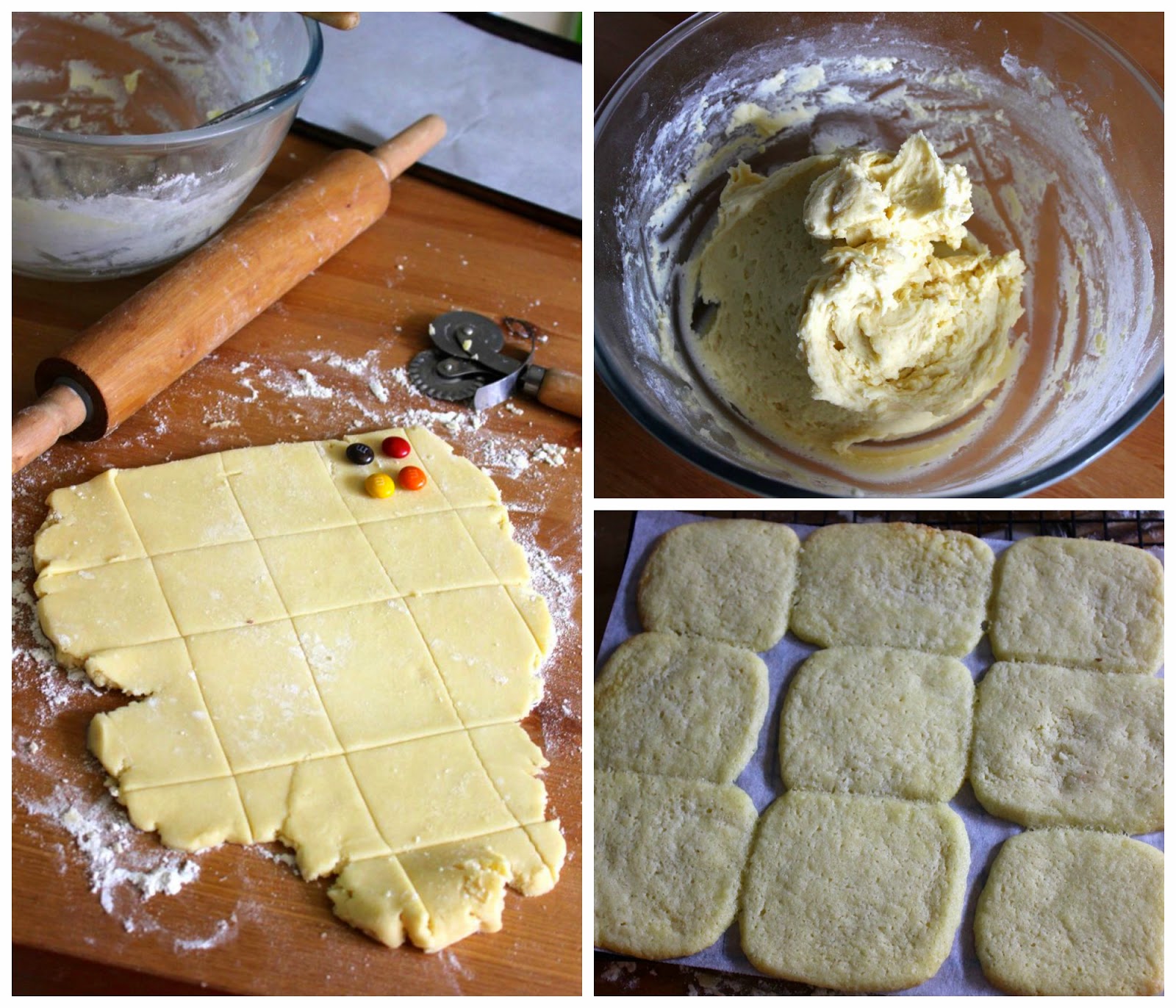 I wanted to make vegan biscuits (cookies if you live in America) but decided the family would appreciate butter rather than margarine.  I usually stock and bake with Nuttalex vegan margarine and am sure it would work here.  However it does help to get the quantities right.

When I made the dough it was really really soft - like butter with a little flour.  I blamed the hot weather and went off to the pool while it chilled.  Out of the fridge it was difficult to handle and the biscuits spread like wildfire (or a bushfire if you live in Australia).  I checked and double checked and found I had put in only three fifth of the butter. 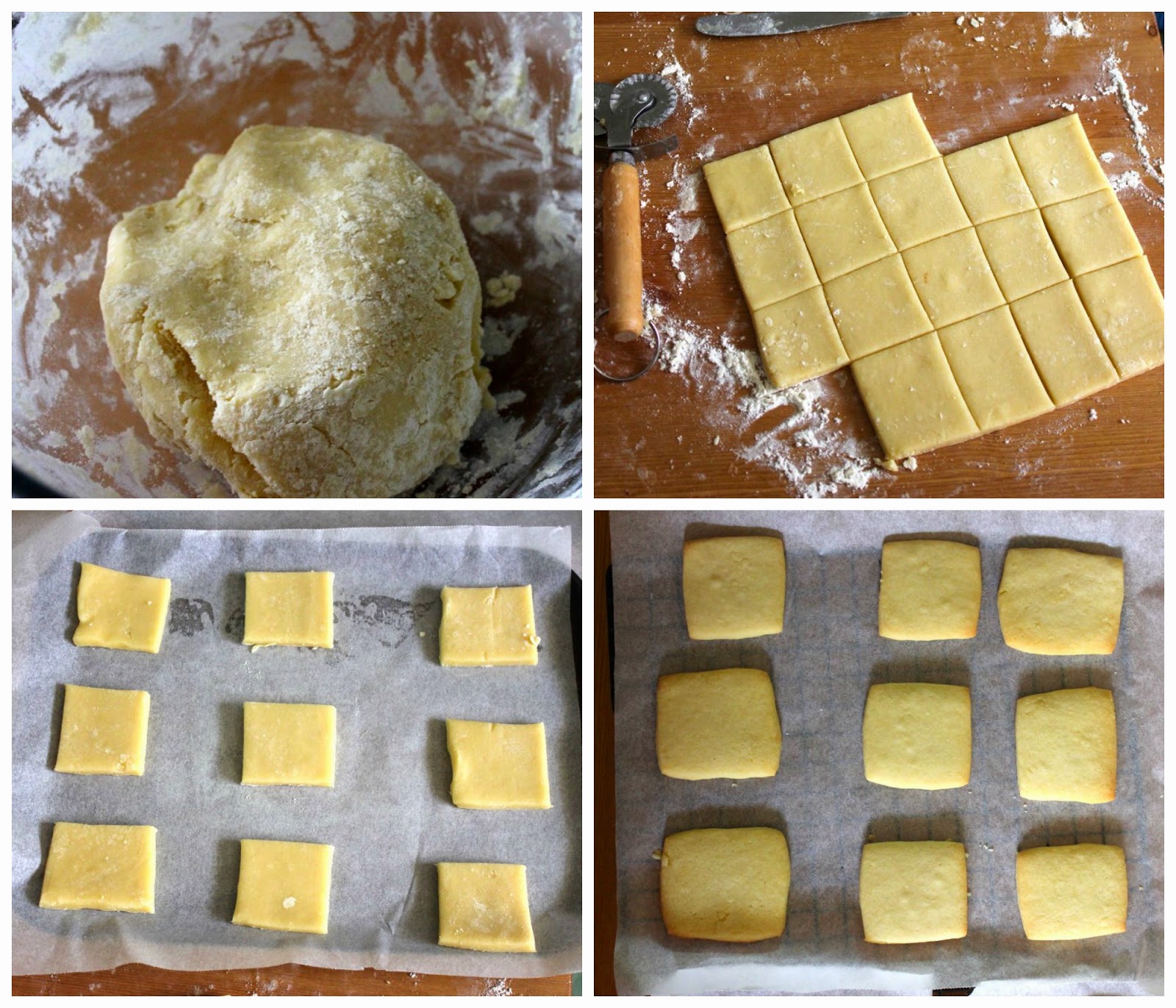 Once I fixed the quantities, it looked like a real dough and the biscuits mostly kept their shape.  It was after dinner and Sylvia was just about ready for bed by the time I started decorating.  She helped sort the m and m's into colours and mix some of the icing.  We may have even sampled a few.  Knowing what was going on in the kitchen did not make for a settled child that evening but she slept eventually. 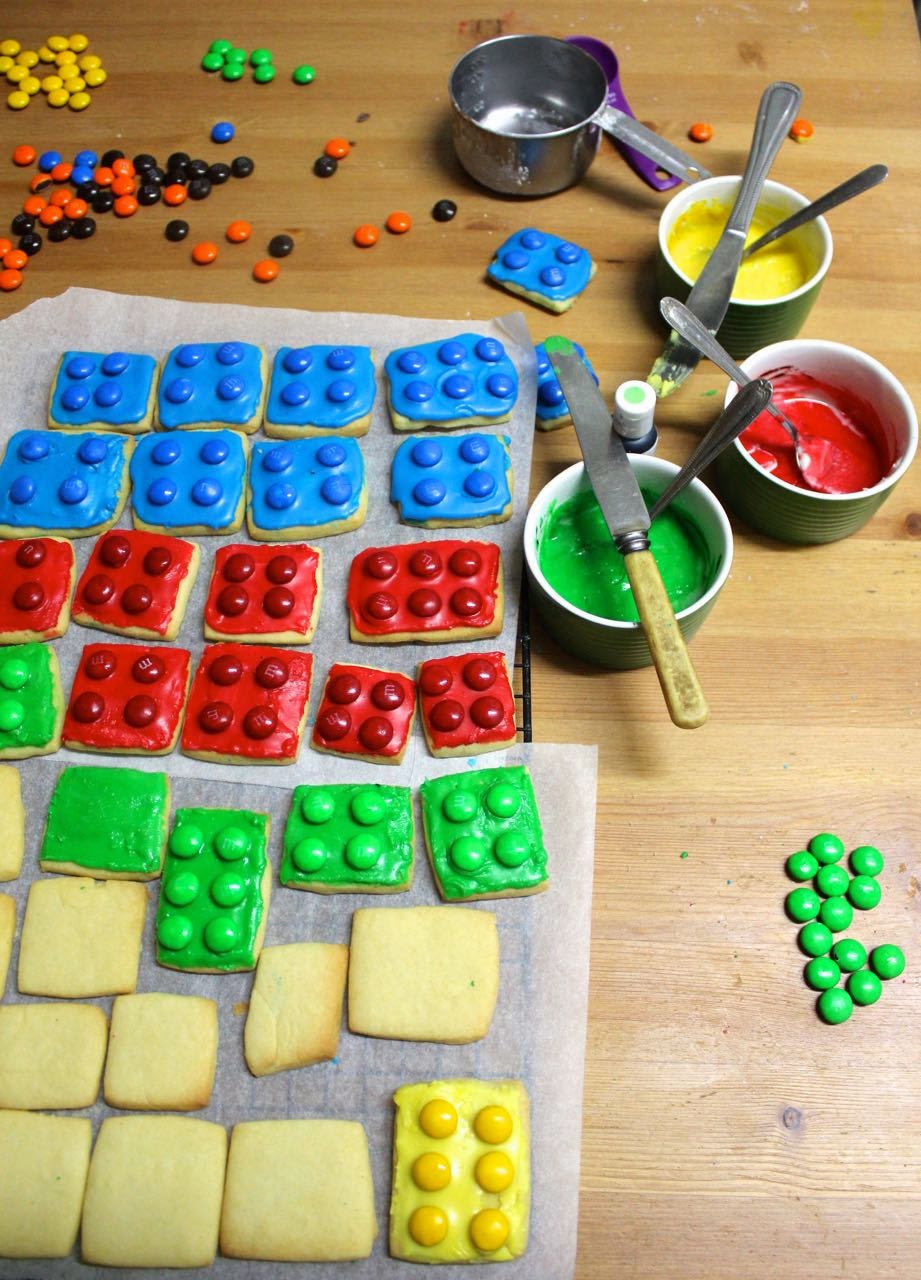 Meanwhile I kept icing the biscuits and arranging m and m's on them.  I know that some people would pipe a square outline and fill it with royal icing.  I prefer my icing without egg white, I don't like piping and I didn't want to lose part of my icing in piping bags.  So I just used thick icing and a knife.  It wasn't fast work but it looked close enough for jazz. 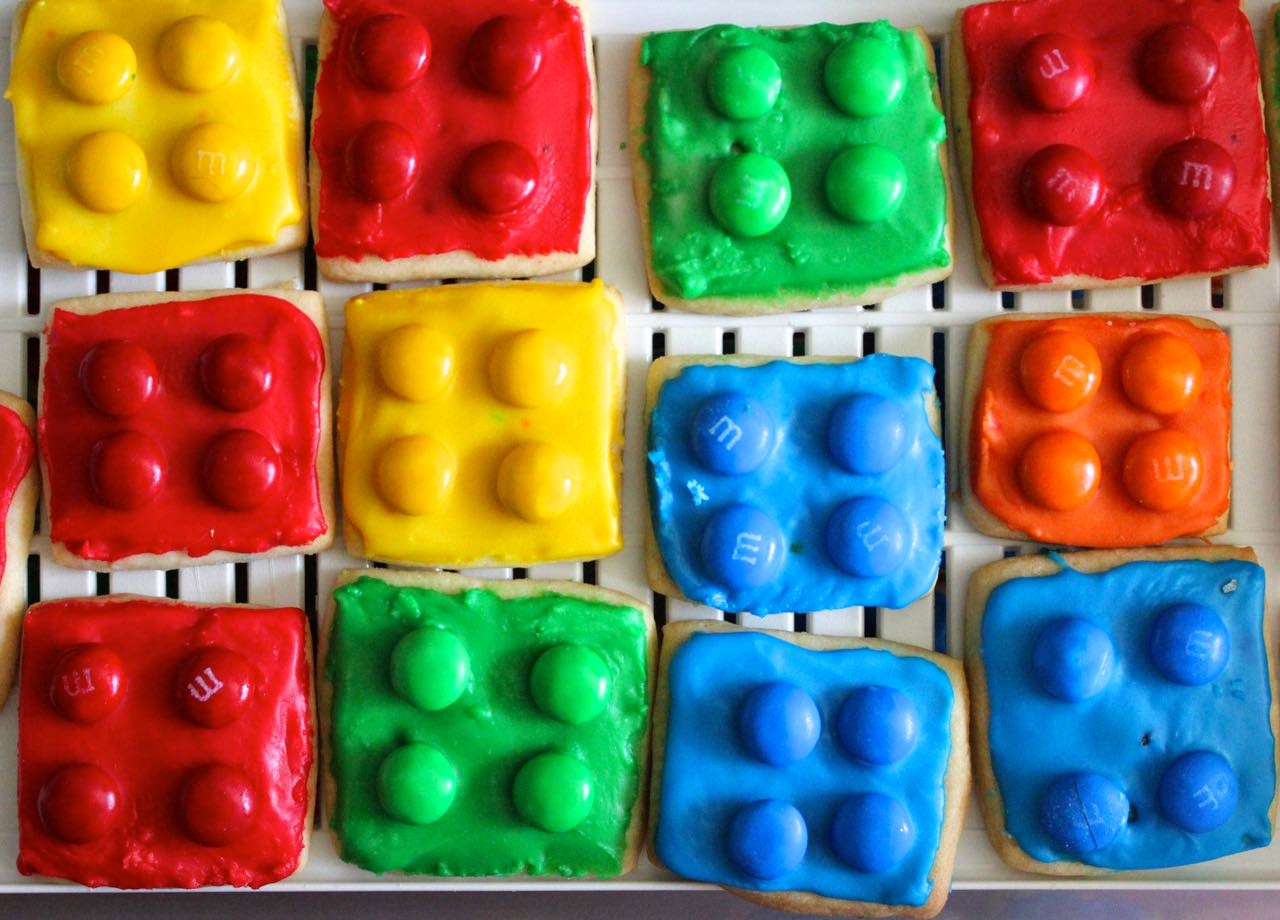 When I took the biscuits to Geelong, everyone was impressed.  How did you match the colours? they asked!  Just luck, I replied.  Then I remembered that the yellow had been all wrong and I had added more dye.  So I guess it was a bit of trial and error.

When I found that there were not enough yellow and red me and m's, I mixed red and yellow which matched the orange.  I also discovered that there is only an m on one side of the chocolates but by the time I noticed, I was too far gone with the biscuits to take much care. 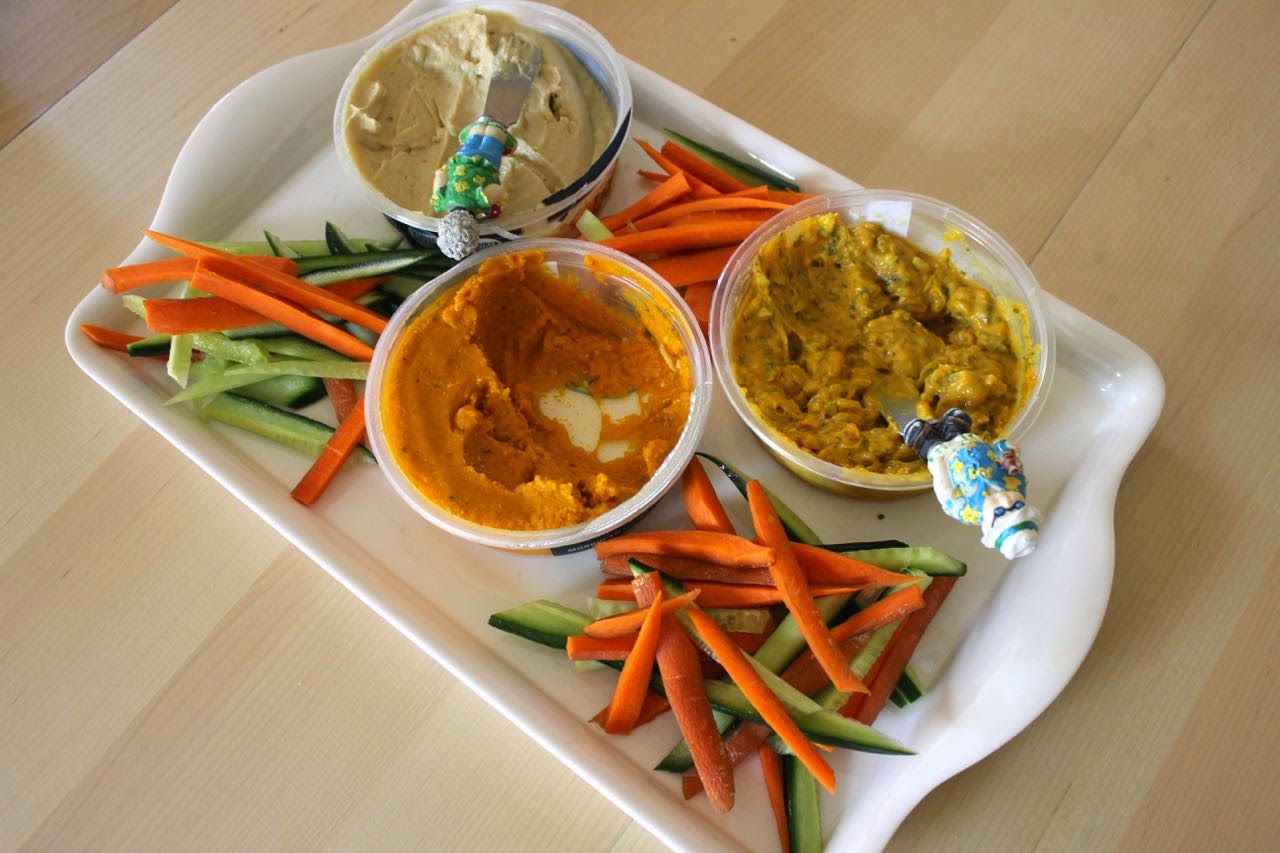 It was such a hot day that the party started at the pool.  It seemed that all of Geelong had turned out for Dash's birthday.  I have never seen it so crowded and crazy.  Sylvia ran into someone on the water slides and got a blood nose!  Back at my parents' house, the party food was quite traditional which meant lots of meat.  My sister made a great lentil salad for me and cheese sandwiches for Sylvia.  And I really loved these dips. 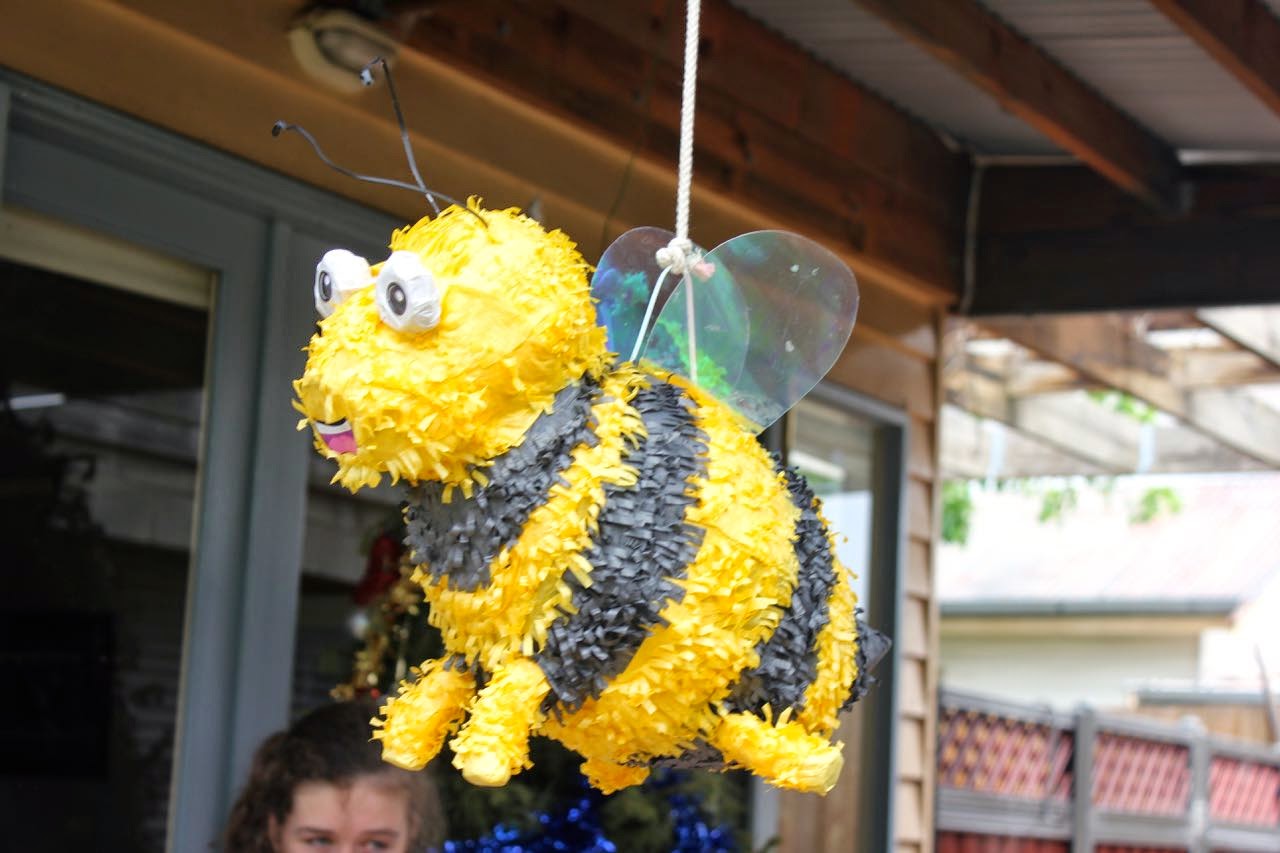 There were lots of party games.  My sister had found a pinata that just need to be filled.  It was so hot that going outside in bare feet for herbs was very painful.  Which meant the pinata had to be in the shade of the back porch.  And done quickly before all the little chocolates melted.  There were no shortage of volunteers to give it a hefty thwack with the cricket bat! 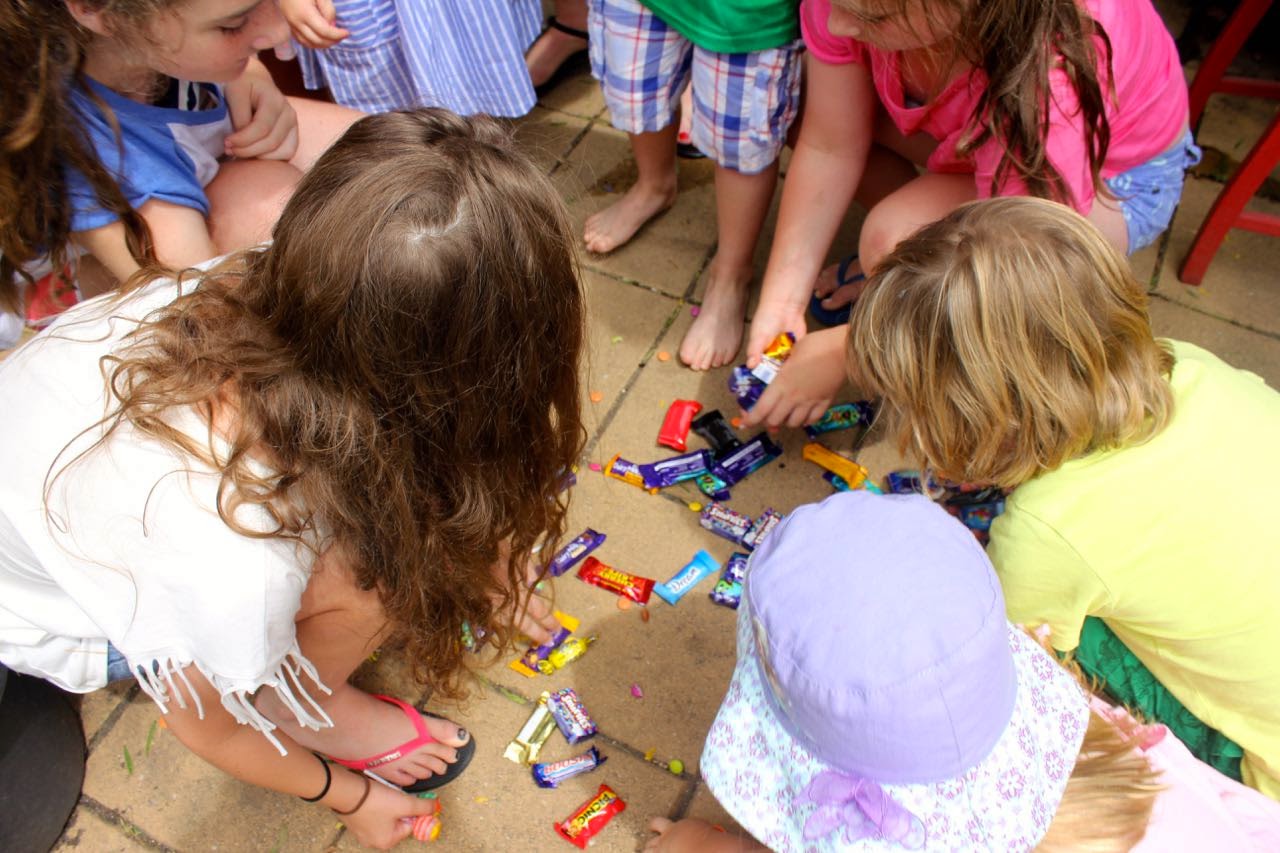 The kids also played Pin the Tail on the Donkey.  No one knew where the donkey was so a makeshift donkey was outlined by yours truly.  Then the kids took over.  They all had a go at colouring in.  My niece Ella made it into a unicorn donkey. 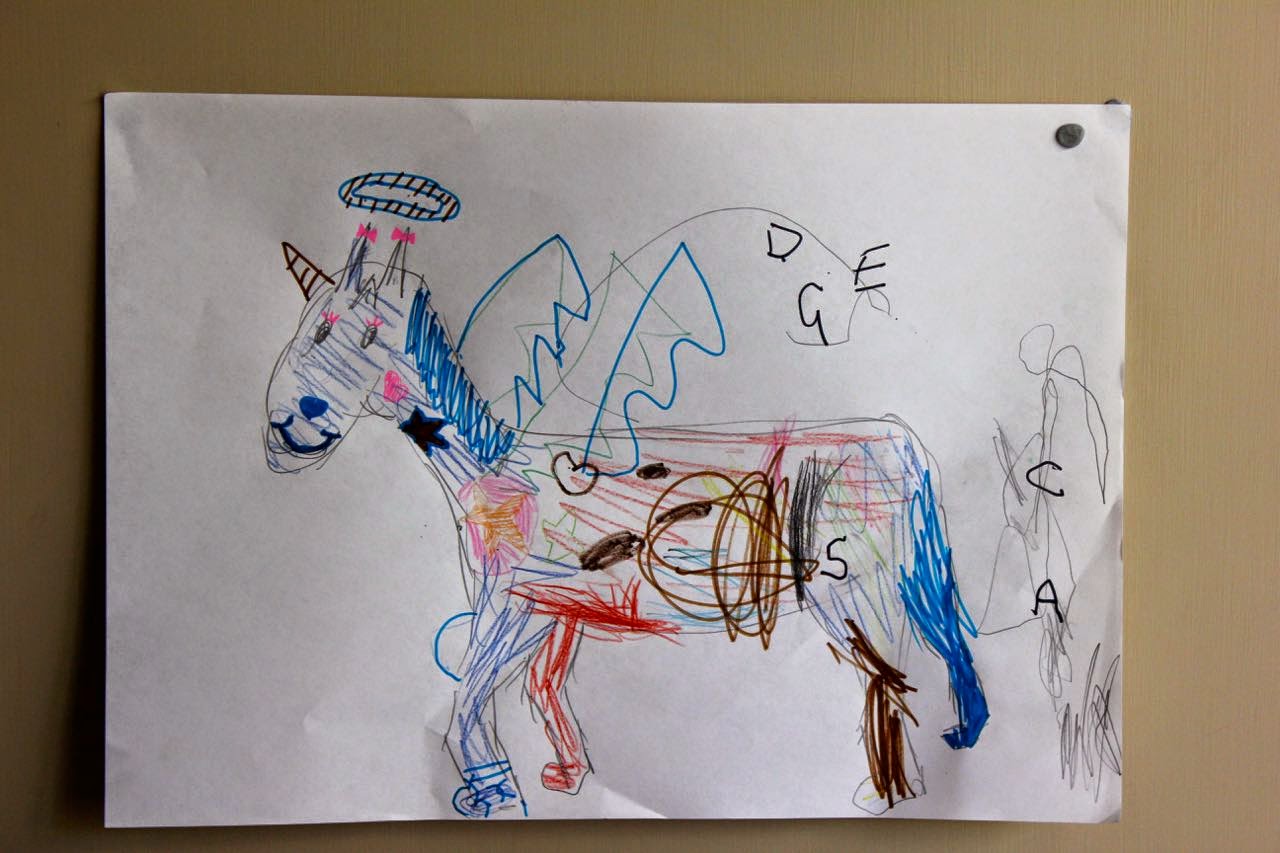 We found a scarf, tied it around each child's eyes and spun them around.  Then they had to blu tak the tail on the donkey.  (That's right!  No pins on my parents' doors!)  You can see where we wrote each initial. 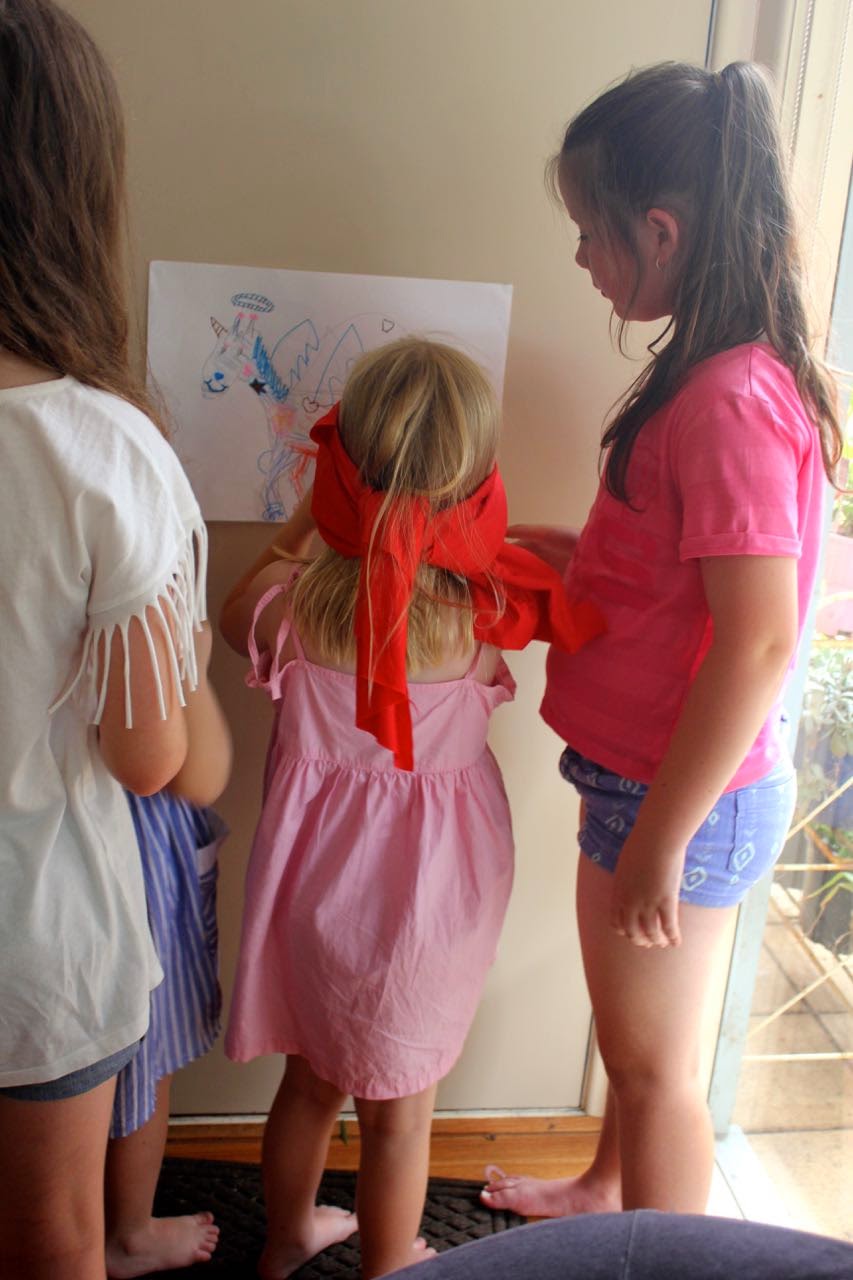 It was decided to let the kids run under the sprinkler in the backyard before the storm started brewing.  By the time they all had their bathers and the sprinkler was creating a mist, the sky was grey and the cool change was well on the way.  Which made it more like an Irish summer's day than an Australian one.  Perfect for my little Irish nephew! 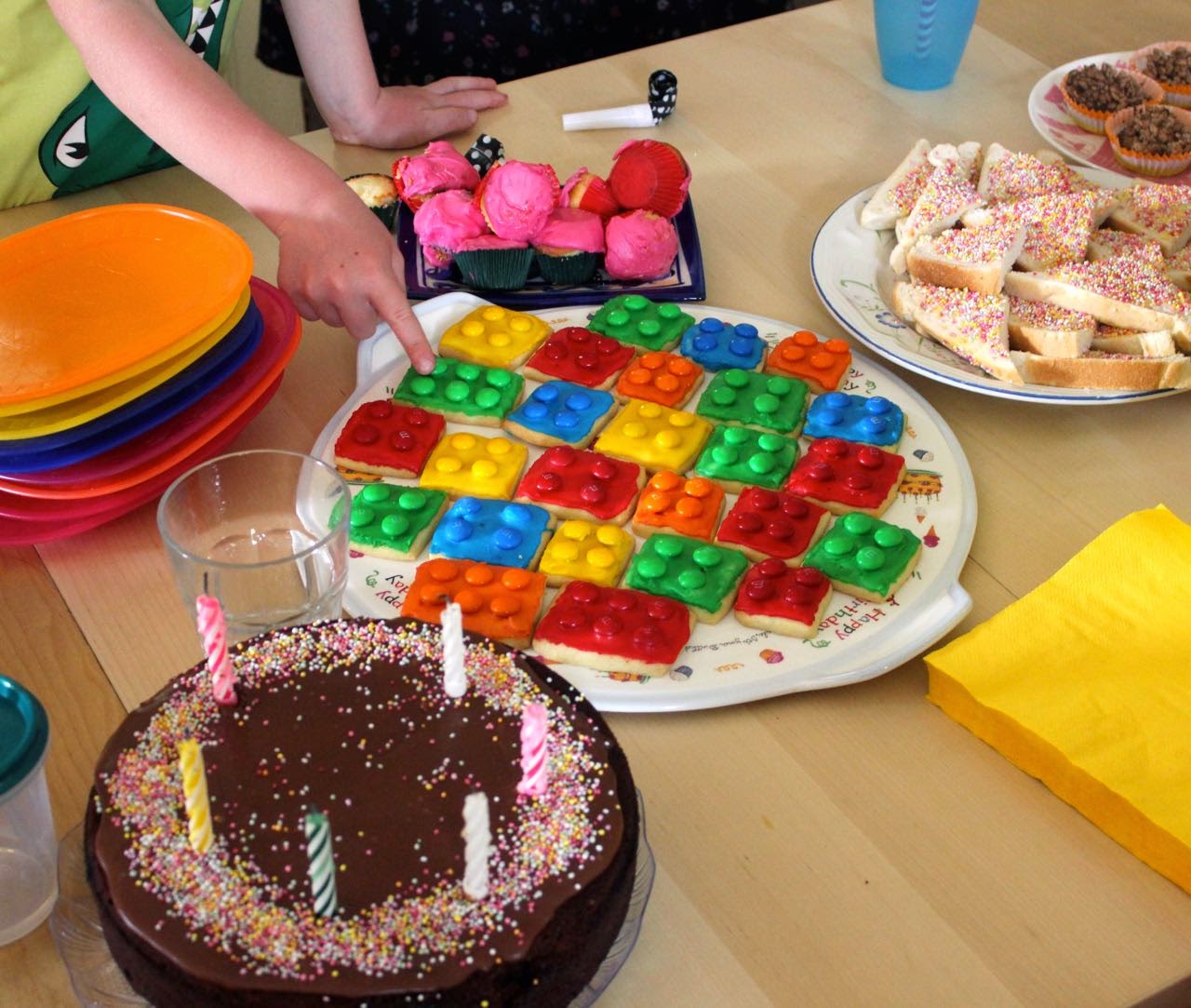 And there was cake and fairy bread and little pink iced cakes and chocolate crackles as well as the lego biscuits.  Dash ended the day by putting together a lego monster truck he got for his birthday.  To paraphrase The Lego Movie, everything was awesome!

I am sending these biscuits to the following blog events:

To make biscuits:
Stir together margarine and icing sugar until creamy.  Add remaining ingredients and mix until it comes together into a dough.  Briefly knead into a ball and chill in fridge for at least 2 hours.  Preheat oven to190 C or 375 F.  Roll out dough on a lightly floured surface to about 0.5 to 0.25cm thick.  Cut into squares or rectangles.  Bake for 8 to 10 minutes or until edges are golden brown.  Cool on a wire rack.

To decorate:
Make icing (frosting) by mixing icing sugar, milk and vanilla until you have a thick spreadable paste.  Add extra spoonfuls of milk if required.  Divide icing into 4 or 5 small bowls and colour each to match one of the colours of the m and m's or smarties.  Carefully ice the biscuits in a square and then position smarties to be evenly spaced like lego blocks.  (NB: if you use m and m's it is best to position the chocolate with the m side down!)

These kept for a few days in an airtight container but the fresher the better as they did get a bit soft.

On the Stereo:
A: Agnetha Faltskog
Posted by Johanna GGG at 18:39