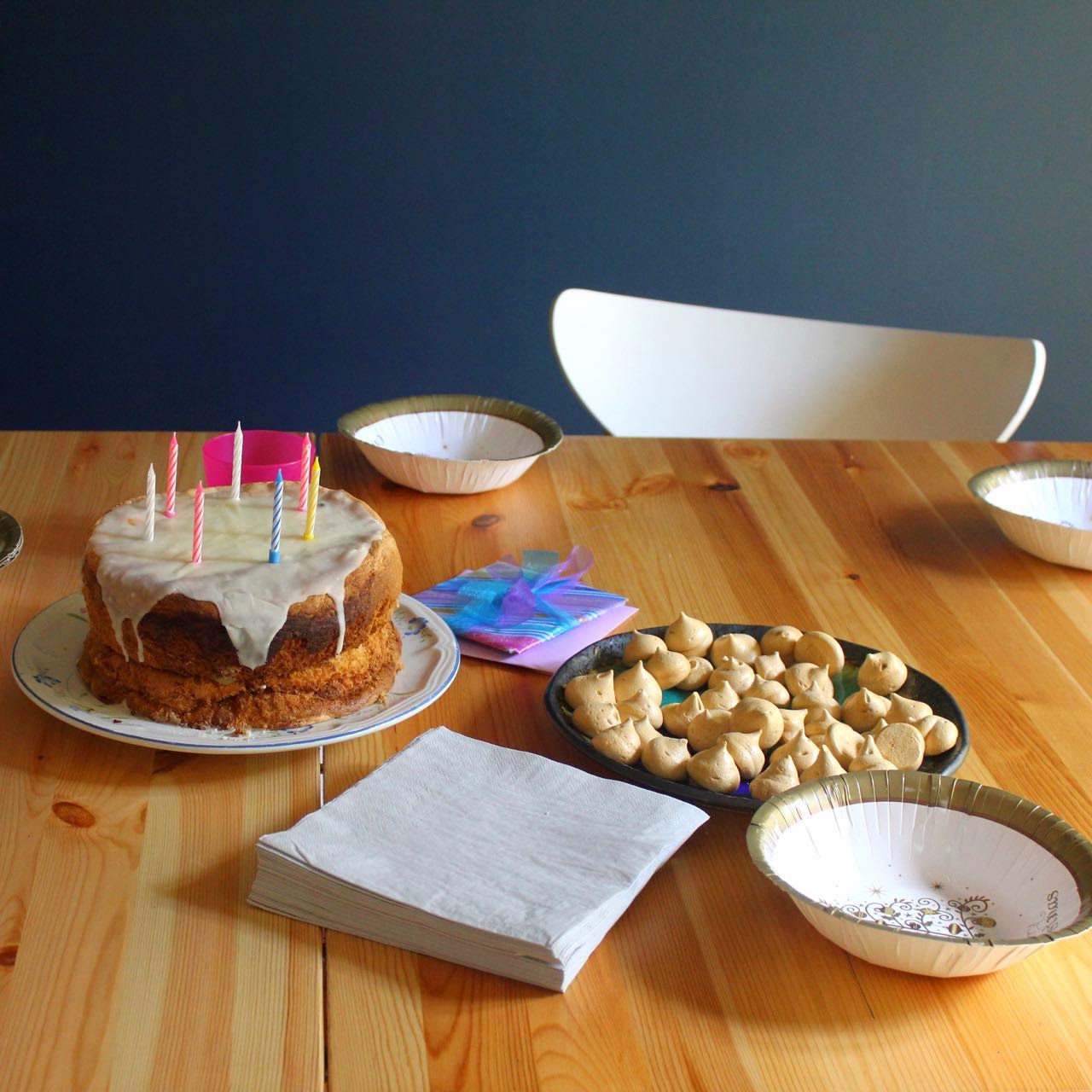 Having made my first batch of meringues I can now pass my meringue wisdom onto you.  Don't make meringues after dinner on a humid summer day.  Honestly they made me sweat with worry that the meringues would never be baked by the time I went to bed and if they did they would be too sweaty, much like me!

Actually I only made them because I had an egg white leftover from my apricot and almond tart.  and I had seen a recipe using maple syrup instead of sugar.  And Sylvia and E love them.  And I had a family birthday gathering the next day.

It was a crazy day and the recipe looked straightforward.  Even though I am intimidated by egg whites.  So I promised myself I would do it despite having many reasons that I was too busy to start.  I put away the Christmas tree, made chocolate granola, went to the supermarket, made birthday cards, read to Sylvia, chatted to a neighbour. 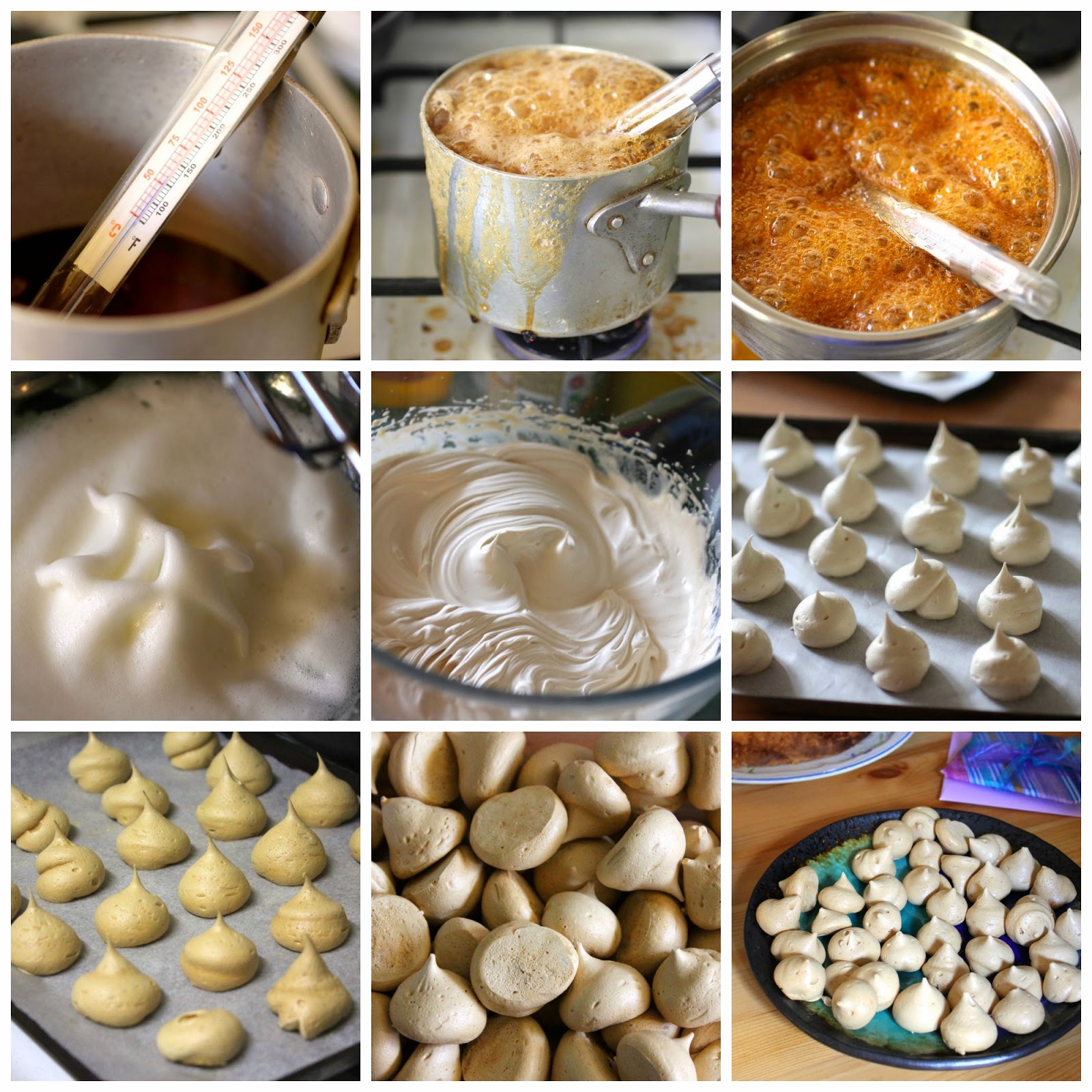 Finally I began.  Maybe if I had started before dinner I wouldn't have got so much wrong.  I dropped the candy thermometer (it didn't break - phew), I didn't know that the maple syrup would froth up so much and had to change saucepans (and clean the stove), my oven doesn't go as low as the recipe called for (thank goodness the oven has no power), and I forgot to sprinkle with our glittery sugar (which I really want to use up).

Then I happened to read that ideally one should not make meringues while it is humid.  I checked the humidity and it was 80%.  I checked again about an hour later and it was 89%.  This worried me as I had put the meringues in the oven at 8pm.  They needed to bake for 3 hours and then sit in the oven for another hour.  And I wanted to get to bed some time.

I baked most on the top shelf of the oven and the last few on the second shelf.  The meringues on the top shelf needed an extra 30 minutes baking (blame the humidity) but were dry and crispy.  I put them in an airtight container to take to Erica's birthday.  The bottom shelf were sticky so I left them in the oven overnight. 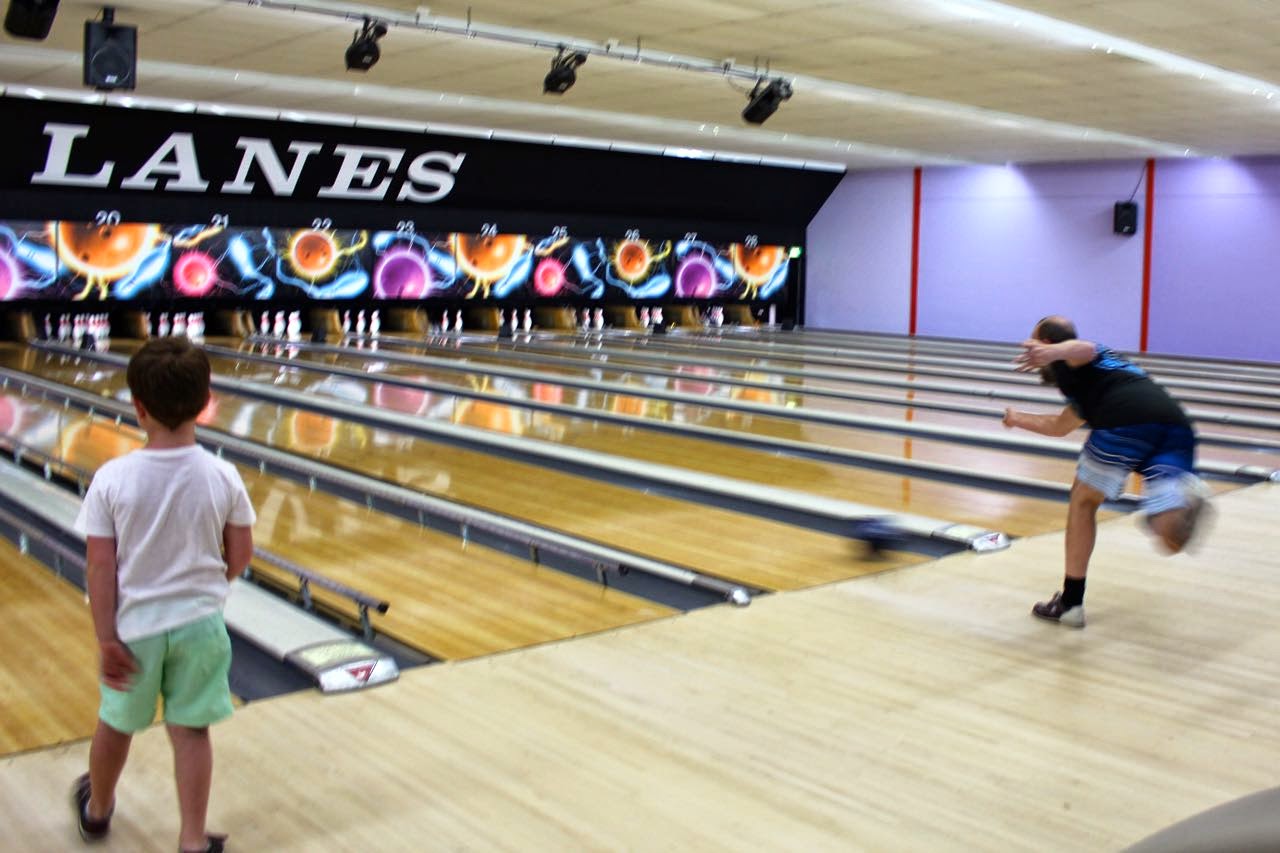 The next morning the bottom shelf were still sticky outside but crunchy inside.  I gave a few to E for lunch and took the top shelf meringues to Geelong.  We had originally planned to go to the zoo but the weather was in the high 30s (celcius) so we headed to the Ten Pin Bowling instead.  It was fun, even with the geeky shoes.  I even got a strike!

Then we headed to my sister's new house for lunch before heading off to the pool.  Susie's place has great air conditioning and a really nice table by a blue wall where I would love to take lots of blog photos!  We had dips and crackers and salads.  (There was meat but let's not mention it.)  For dessert there was sponge and pavlova and my meringues. 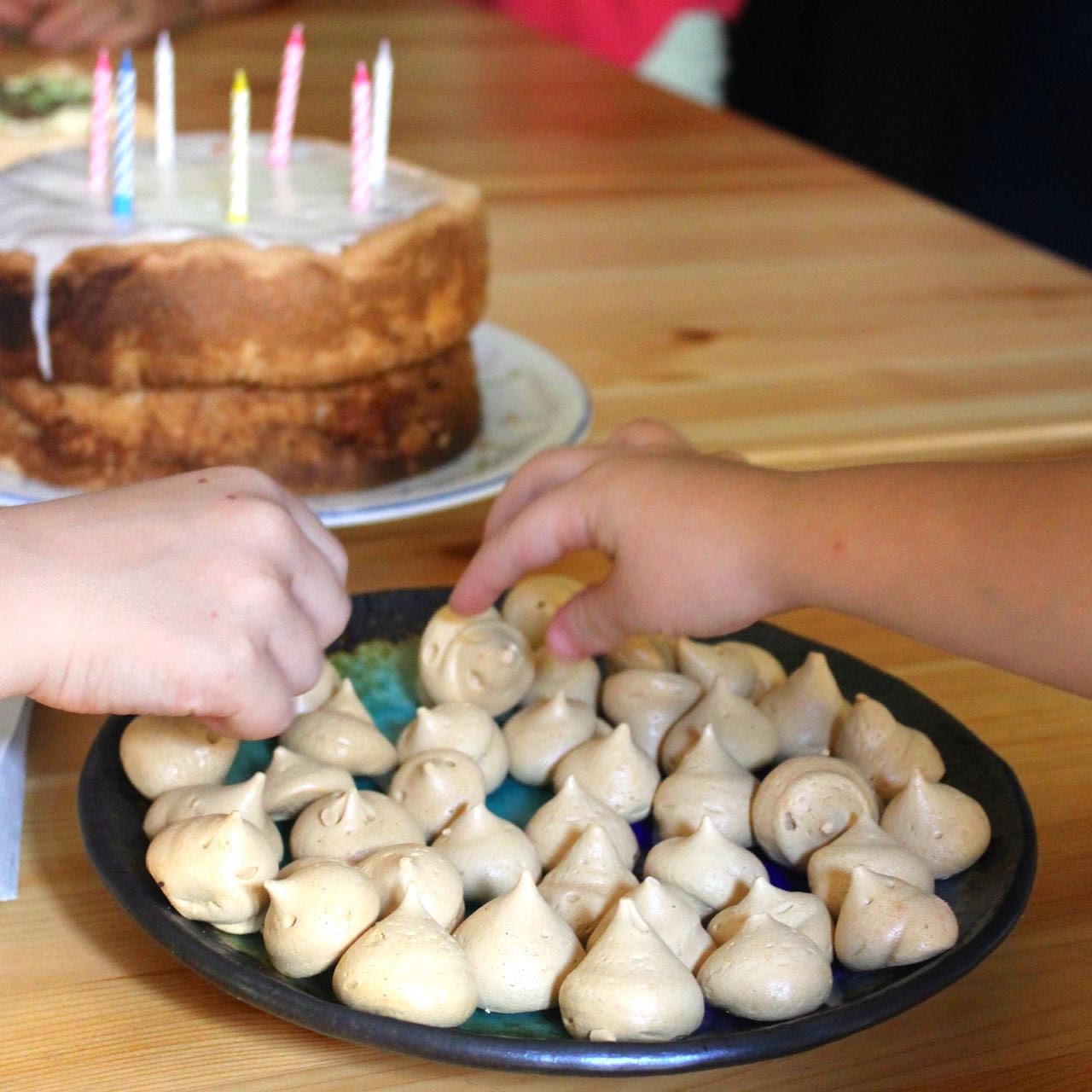 Sylvia and her cousin Dash really loved the meringues.  We had to shoo them away so there were some left after we sang Erica happy birthday.  I was pleased that all the meringues were eaten because it was so humid that once I took them out of the airtight container they became sticky around the edges.  By the time the last one was eaten, it would have stuck to your hand like velcro.

They tasted amazing.  Far more depth of flavour than a regular meringue (which has never impressed me anyway).  The caramelised maple syrup gave them a slightly smoky intense flavour that I loved.  Sylvia and E loved them too.  If only maple syrup wasn't so expensive* I would make them more.  Though I would have to find a use for the egg yolks!

Sadly E didn't come down for the lunch.  If he had I am sure he would have been telling one of his favourite jokes.  "Is that a doughnut or a meringue?"  It needs a Scottish accent to make sense of this joke.  He did enjoy the meringues I left him and by the end of the day there were no sticky bottom shelf meringues left in the house. 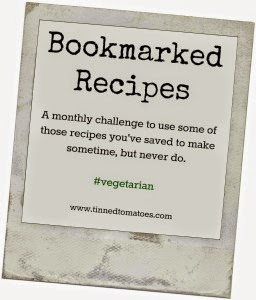 I am sending the meringues to Jac at Tinned Tomatoes for Bookmarked Recipes, a monthly event where bloggers share bookmarked recipes they have made..

Previously on Green Gourmet Giraffe:
One year ago: How to serve (vegetarian) haggis
Two years ago: No knead honey and oat bread II
Three years ago: WSC Blueberry Chocolate Cake
Four years ago: BBQ tofu like an Aussie flood
Five years ago: Muffins at the tennis
Six years ago: Baba - full of eastern promise
Seven years ago: Raspberry Vinegar for Dummies

Preheat oven to very low (Food Nouveau suggested 75 C but my oven only goes down to 120 C.  However my oven never bakes anywhere near the temperature unless the fan is on so I left my fan off and it was probably more like 90 to 100 C.)  Line baking trays with baking paper or silicone mats.

Bring maple syrup to a boil in a medium to large saucepan - it doesn't look like a lot but it bubbles up.  Once it boils heat until it reaches 120 C on a candy thermometer.  Set aside.

Beat egg whites and cream of tartar until soft peaks form.  This did not take long with the electric beaters.  Slowly add in the hot maple syrup at the side (it will form crystals if the hot maple syrup touches the beaters) beating as you go (except when I needed to scrape out the saucepan).  Beat for 3 minutes until you have stiff peaks and the mixture has that candied taste.

Spoon into a piping bag (mine is silicone) with a large hole and pipe small circles with peaks onto lined baking trays.  You don't need to leave too much room between meringues as they don't expand when cooking.

Bake for 3 hours or until the meringues come off the trays with no resistance.  You may need longer if it is humid.  Once baked, turn off oven and leave for another hour.  Cool and store in an airtight container.  Once mine came out of the container they went sticky around the edges in the humid conditions.  Food Nouveau says you can keep them for up to 2 weeks in an airtight container in the fridge.

NOTE: I just discovered today that maple syrup is far cheaper in Costco than in the supermarket!

On the stereo:
Twenty four classic blues songs from the 1920s vol 12: Various Artists
Posted by Johanna GGG at 16:37