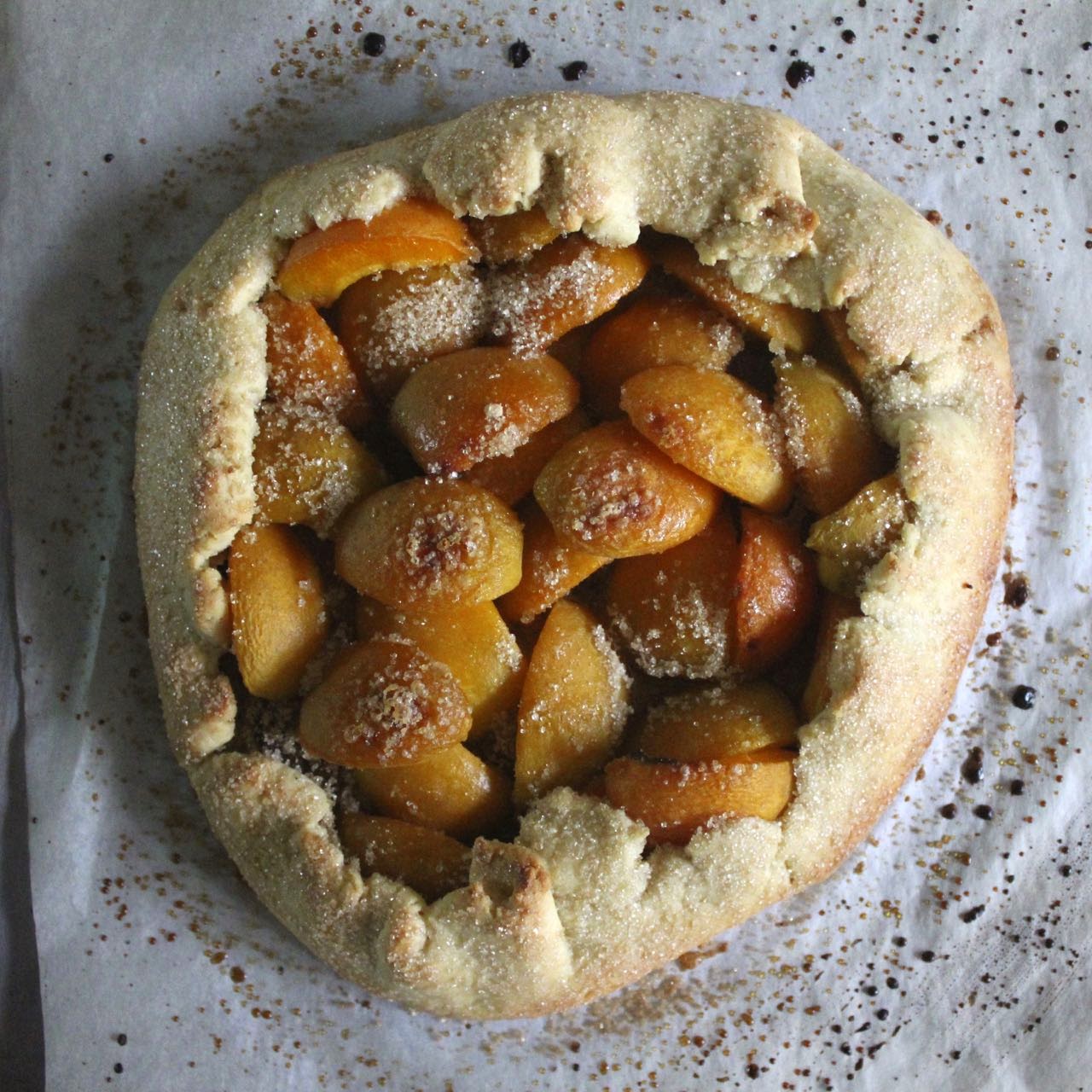 For me, an apricot tart means that the world is as it should be.  As a child I always wanted apricots in desserts rather than apples.  I appreciate apples far more these days and now understand that apricots have a short and wonderful season.  Yet I still glory in a baked dessert that revolves around apricots.  Hence my excitement to see Bill Granger's recipe for an apricot and almond tart in the The Age just before Christmas. 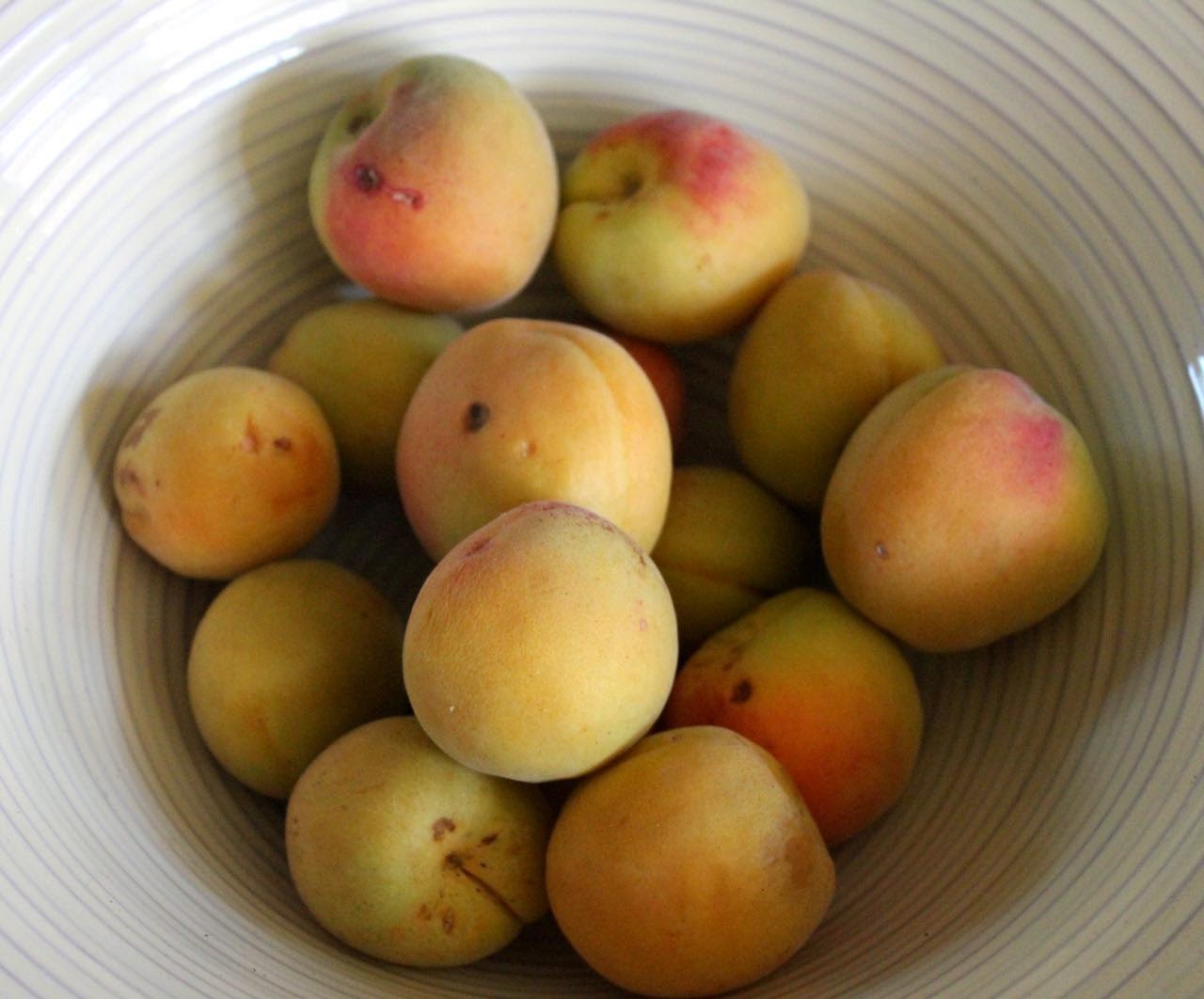 I had grand plans to make the tart on New Year's Eve but we were swimming in food.  Then I thought I would make it for our picnic at the Wind in the Willows.  However it just seemed totally impractical.  How do you keep it upright and serve it neatly at a picnic!

Bill Granger says a picnic isn't a picnic without a sweet tart.  I think his picnics are different to mine.  He probably has the servants run around with wicker picnic baskets of the good china and best silver cutlery with which to serve slices of tart.  Not us!  I don't know that I have ever had a tart at a picnic.  But I digress! 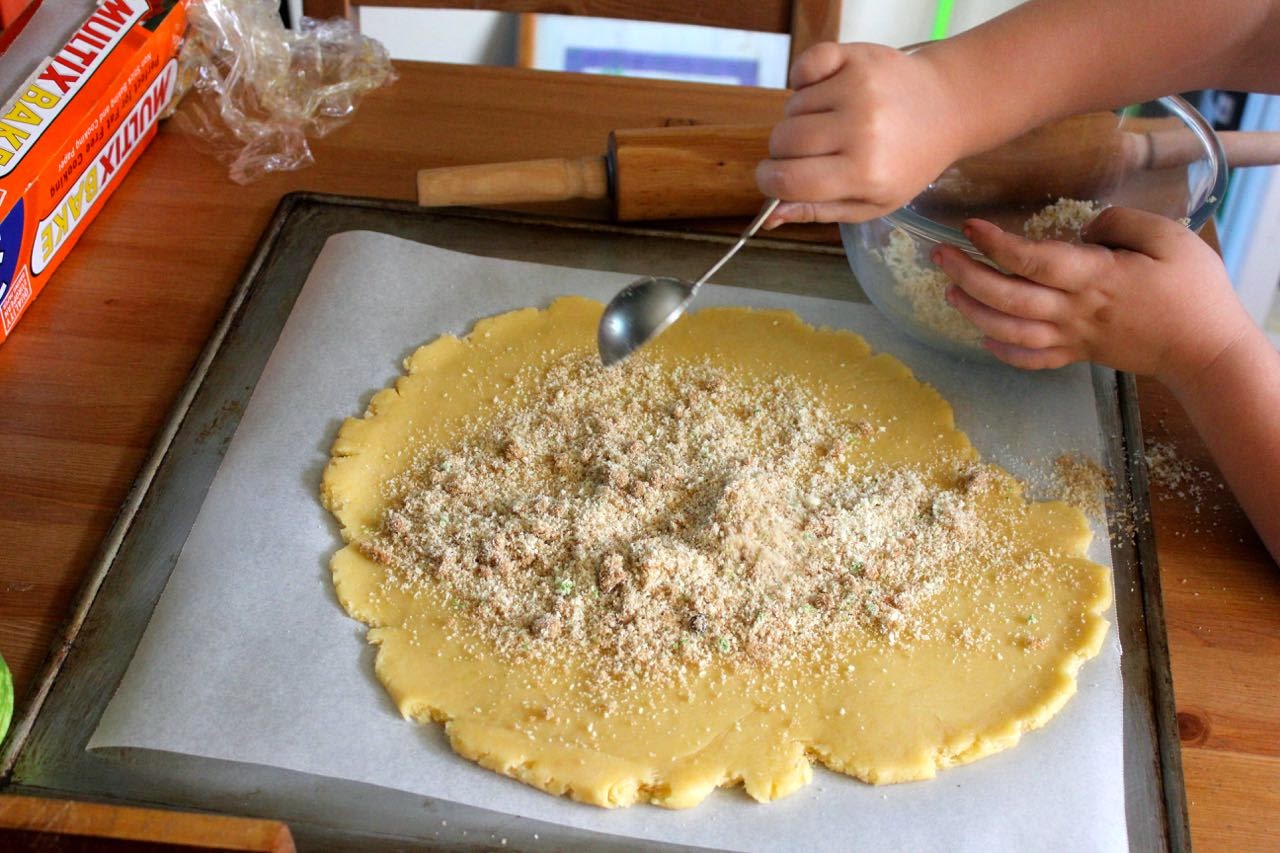 Then fate intervened.  My brother has so many apricots on his tree that he has considered charging people to pick their own.  My mum gave me a generous bag of them.  Sylvia and I enjoyed most of them before they were ever squidgy chin-dripping ripe.  But I did manage to use some in a tart on an evening where we were running behind because we had a late visit to the park. 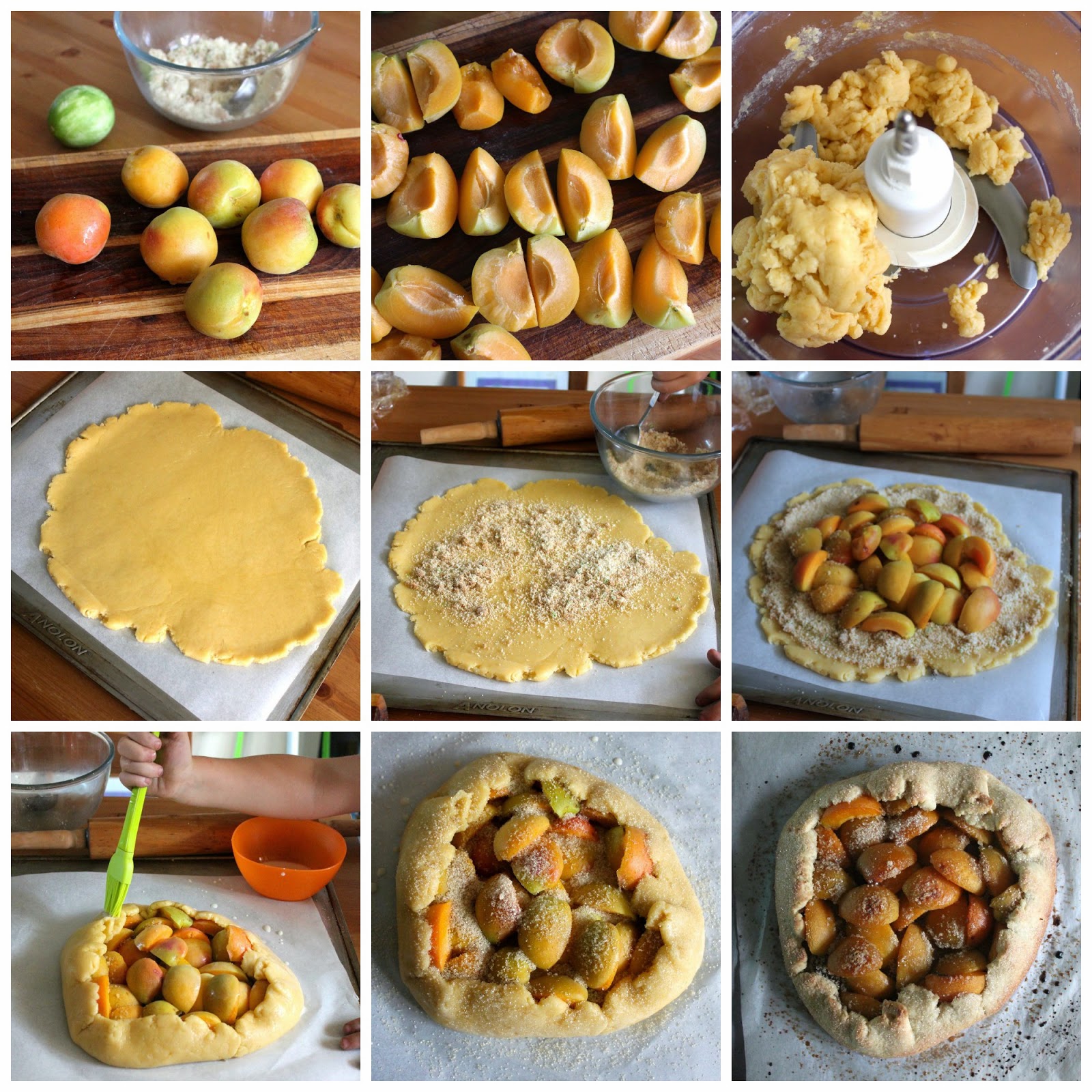 I had been promising the tart for so long that it seemed only fair that I let Sylvia stay up late to eat a slice of the warm tart with us.  After all it is the school holidays and we had an episode of the Nowhere Boys to catch up on.  She loved helping to make it and loved eating it even more.  Even more surprising was that E - who always says everything is better with less fruit - loved the pie and the fruit filling.  Nobody can resist the spell of the magnificent apricot!

Sylvia ate all of her apricots out and then ate the pastry shell like a biscuit.  It impressed me that it kept its shape and was both soft and crispy with a marzipan-style layer of almonds.  Both E and Sylvia agreed I had made the right decision in leaving the chopped almonds off the top of the tart. 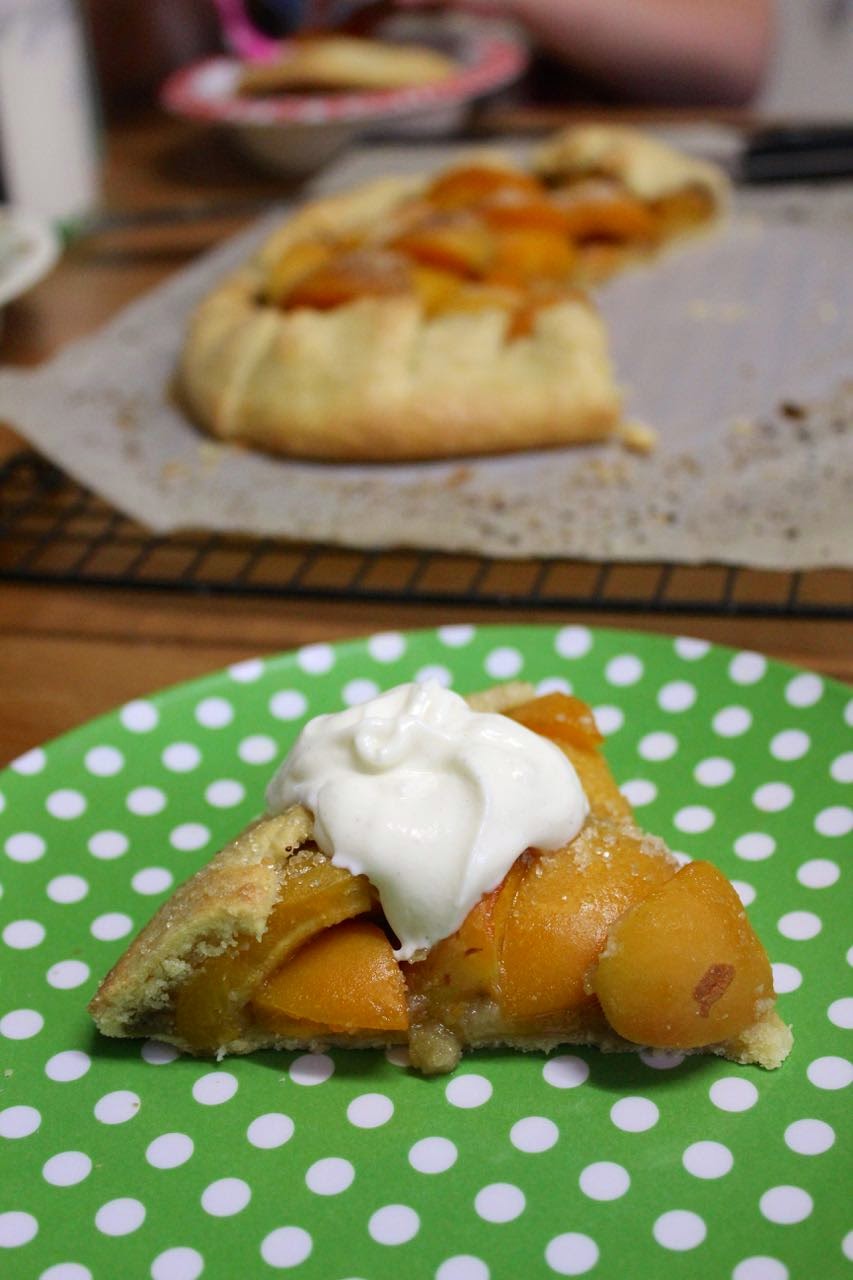 Despite my claim that this was brilliant with apricots, I am sure this would work well with other fruit.  I always feel a bit awkward with pastry but had no problems with this one.  Perhaps a plum tart in late summer or an apple tart in autumn might work.  I would also love to try the pastry without the egg yolk because I hate having egg whites hanging about.  (Perhaps like this pastry.)

Sadly we are approaching the end of apricot season.  My mum has some more from my brother's tree in her fridge for me.  So even though I don't make fruit tarts very often, I can still dream that might make this tart once more this summer.  (Not over the this week though.  I am be at the beach at Ocean Grove and offline.  However a few scheduled posts should pop up, including this one.)

I am sending the tart to these blog challenges:

Previously on Green Gourmet Giraffe:
One year ago: Ocean Grove beach house and what we ate
Two years ago: Baked brie with cranberry sauce and walnuts
Three years ago: Malabar Hut - why it is our favourite Indian takeaway
Four years ago: Fruit mince scrolls and muffins
Five years ago: Gado Gado with Marmalade
Six years ago: NCR How My Chowder Fed the Dalek!
Seven years ago: Scrumptious Sugarfree Slice

To make the pastry: Mix flour, margarine and sugar in food processor until crumbly.  Add egg yolk and enough water to make the pastry hold together.  (Bill Granger suggested 1-2 tsp and I used 2 tbsp.)  Bring pastry together into a ball, kneading briefly and wrap in clingfilm.  Chill in fridge for about 30 minutes.

Preheat oven to 200 C (this worked for my slow oven but 190 C like Bill did might be better for regular ovens).

Roll pastry out into a 25cm diameter circle on a large piece of baking paper that is spread over the baking tray you will use.  Sprinkle the almond meal mixture over all the pastry.  (It will seem like a lot but that is fine.)  Arrange the apricots in the middle leaving a generous inch of pastry around the edges.  Fold the pastry edge over the apricots.  Brush the pastry and apricots with milk.  Scatter the whole tart with raw sugar.

Bake for about 35 minutes or until the pastry is golden brown and the apricots have softened.

On the stereo:
Storybook: Kasey Chambers
Posted by Johanna GGG at 21:49