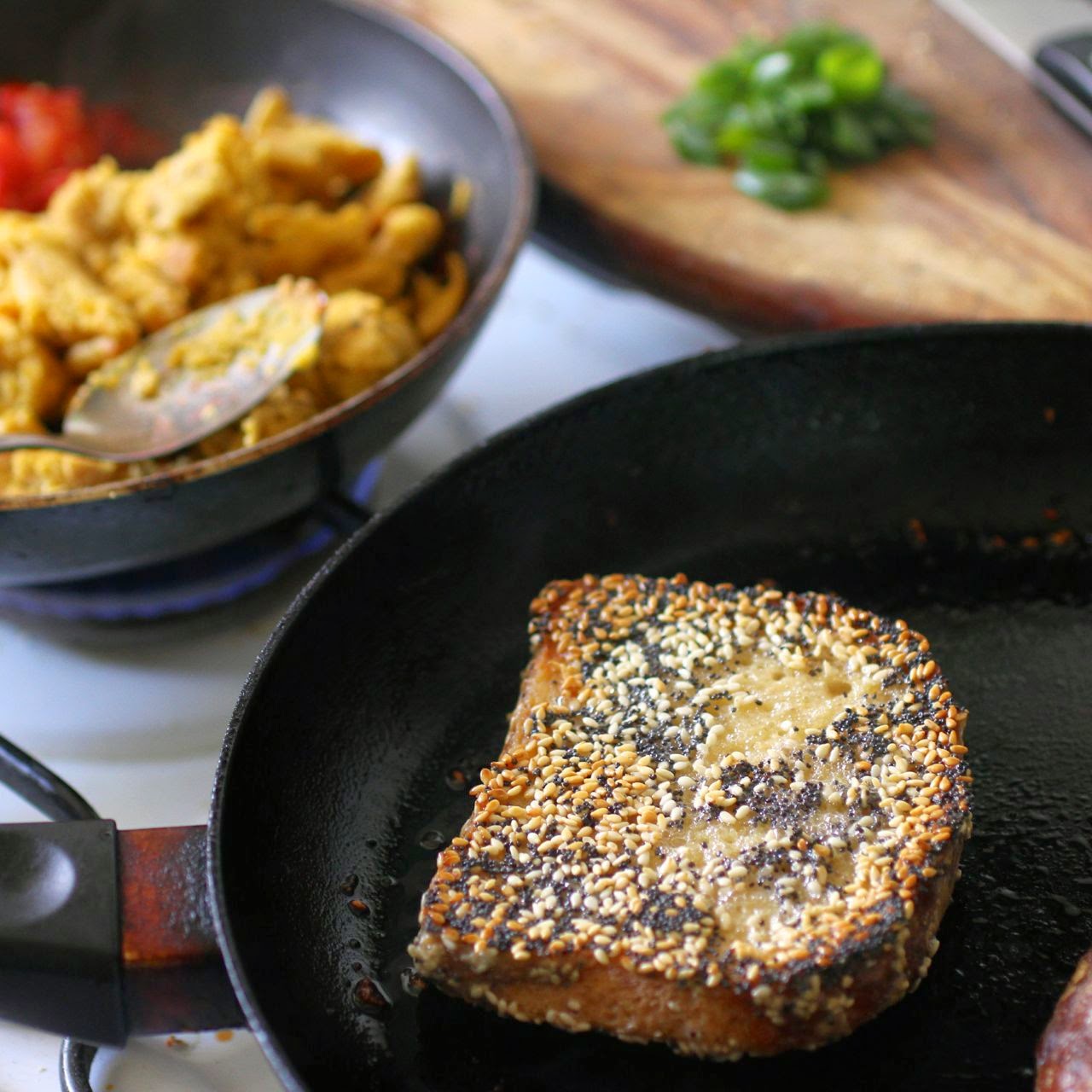 French toast always has been a mystery to me.  I never liked eggs enough to want it in my life.  Hurrah for vegan french toast!  I tried it once.  It was ok.  But thanks to Isa Does It, I discovered last weekend that if you coat it in coconut, it is amazing!  Then I wanted something more savoury and thought how much I love a seedy crust on bread.  So I coated the French toast in seeds.  So very good. 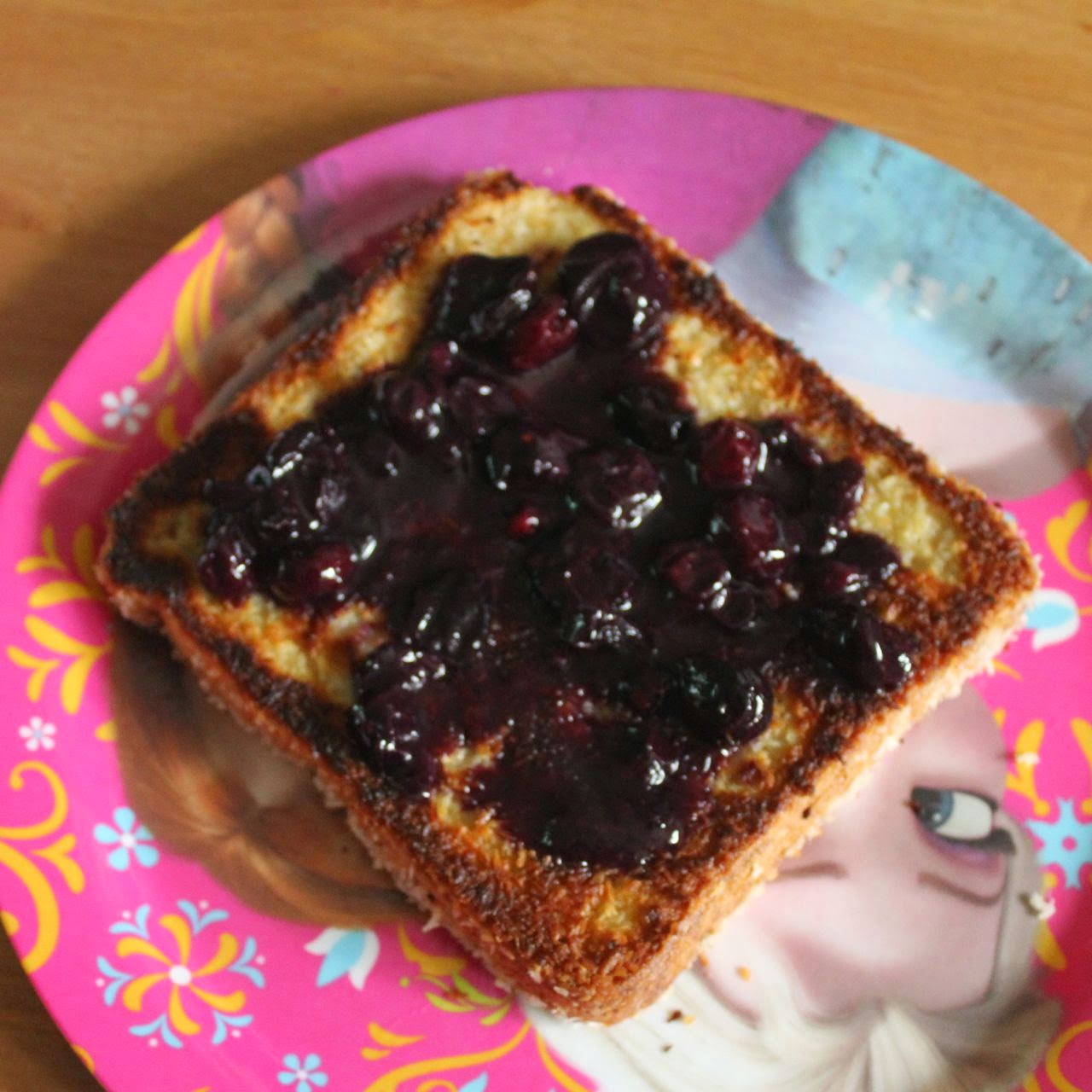 When we made the French toast last weekend, Sylvia wanted pancakes.  I convinced her that French toast was actually bread in a pancake.  She was happy to call it "French pancakes toast".  Yesterday when I said we could make French toast she was delighted.  Seems I have won her over.  She loves it with some berry sauce. 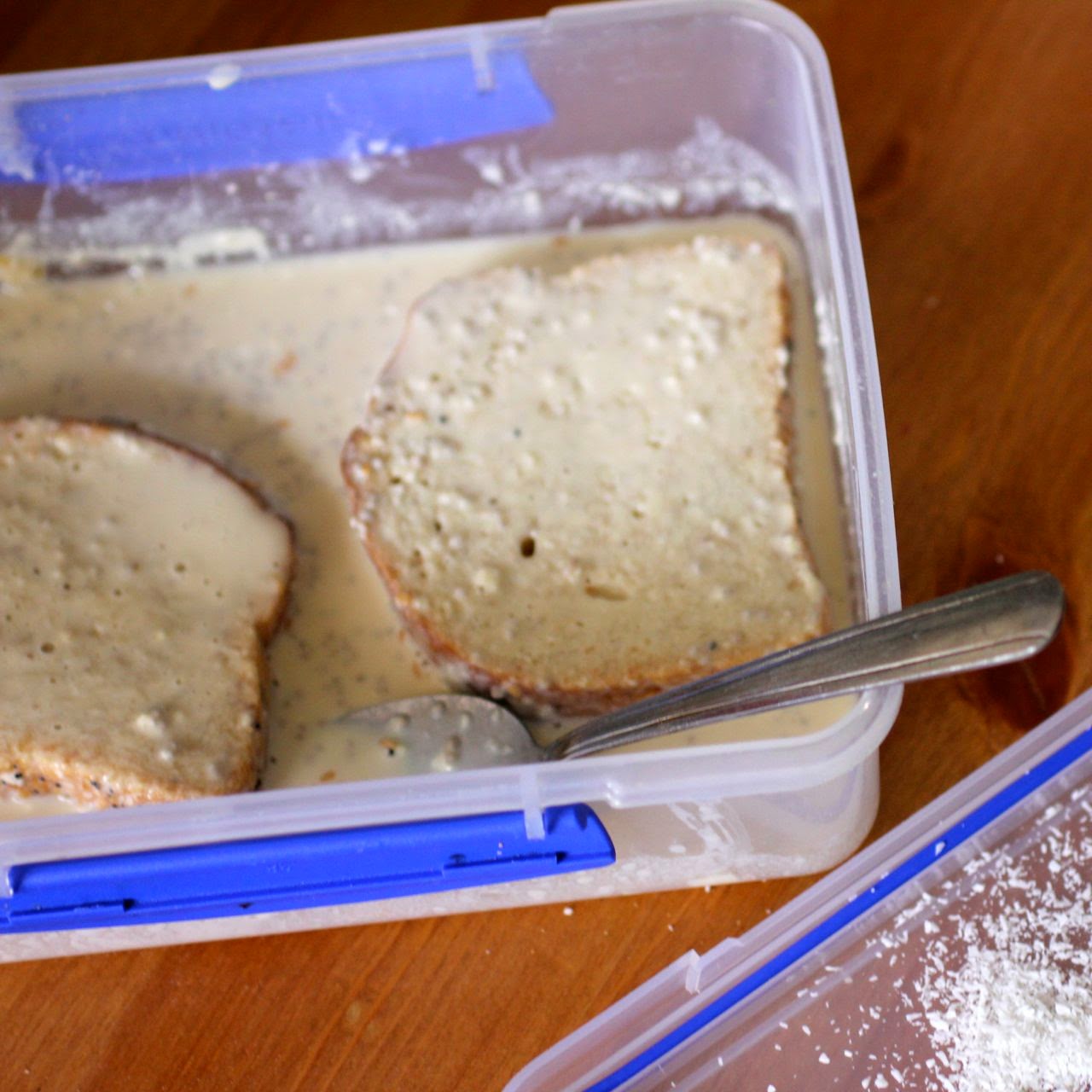 One reason I wanted to make the French toast is that I had a heel of a loaf of sourdough bread to use up.  But I also wanted to experiment with savoury French toast.  E says he used to eat it with tomato sauce.  That seemed wrong.  I fried up some tomato and some chickpea scramble. 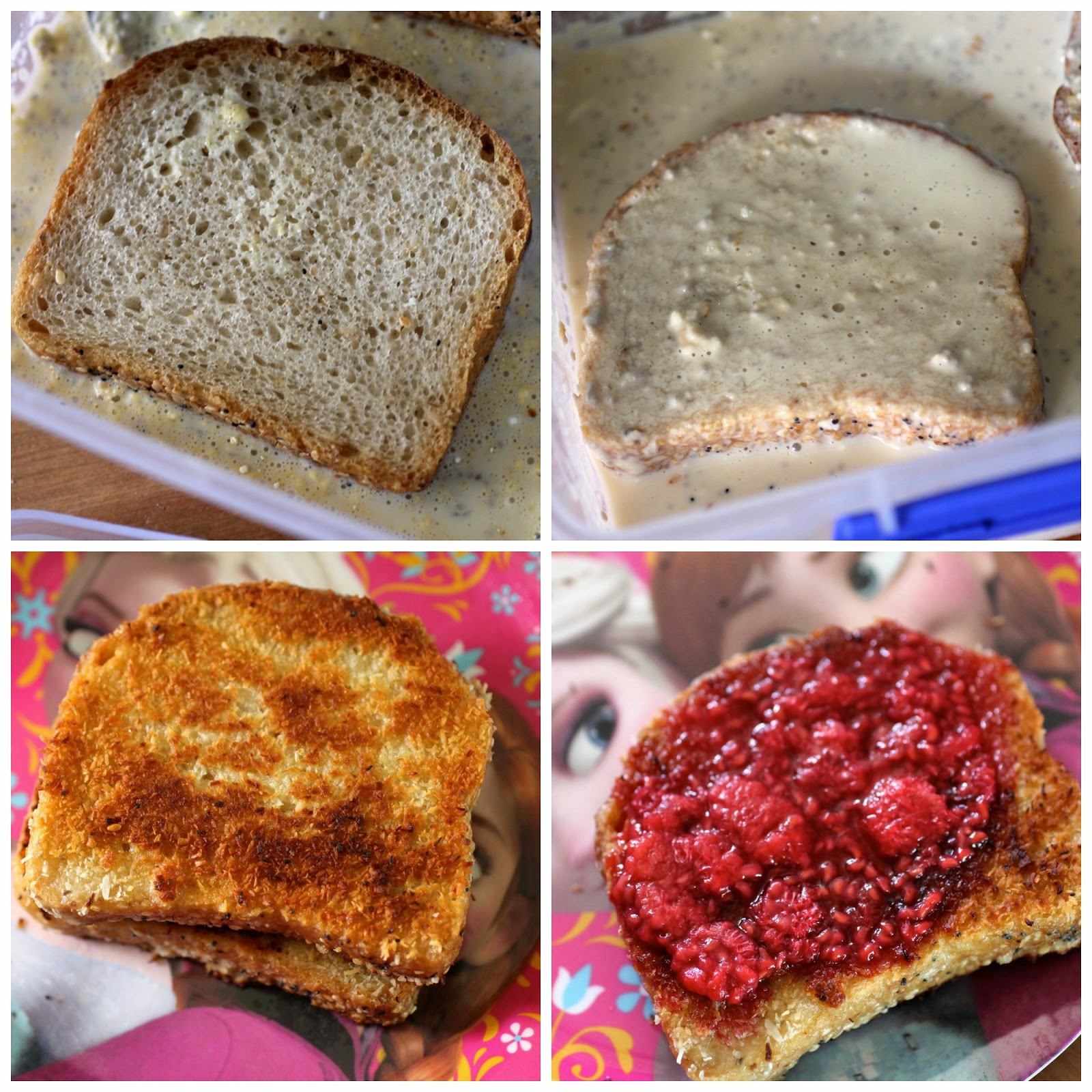 Last weekend Sylvia loved helping.  Yesterday she had suddenly fallen in love with her dolls house furniture all over again and had to set up some rooms.  E was still asleep.  It was very relaxing to potter about the the kitchen, even though it was a bit of work to make a sweet and savoury version.

Sylvia loved her sweet version with raspberry sauce.  Last weekend I found I preferred mine with maple syrup.  Did I mention I experimented with some chia seeds in the sweet mix too.  Inspired by Kari's French toast.  Perhaps this is what sent me down the seedy path! 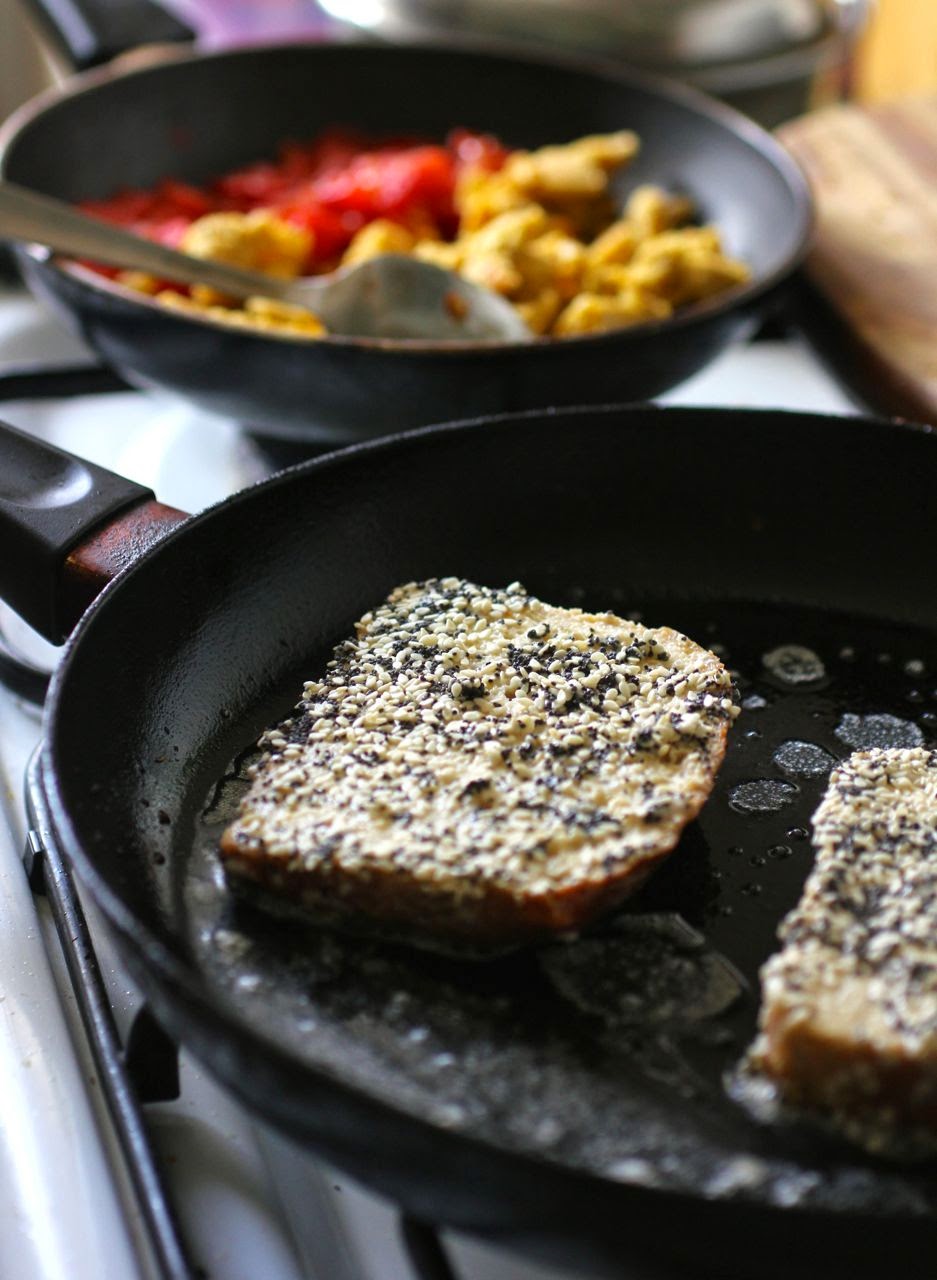 Meanwhile I tried frying my savoury French toast in seeds.  It wasn't quite as light and fluffy as last weekend.  Possibly the seeds weighed it down, or the sourdough bread was that much heavier than bakery bread, or I didn't use as much milk.

I think in future I would leave the vanilla out of the sweet French toast and use the same dipping mixture for the sweet and savoury.  Or I might just mix the seeds in with the dipping mixture rather than dipping in a mixture of seeds and scattering seeds over the gaps on the toast.  I also have this crazy idea of spreading the bread with vegemite before dipping and then just serving with a few slices of tomato on top.  The possibilities are endless. 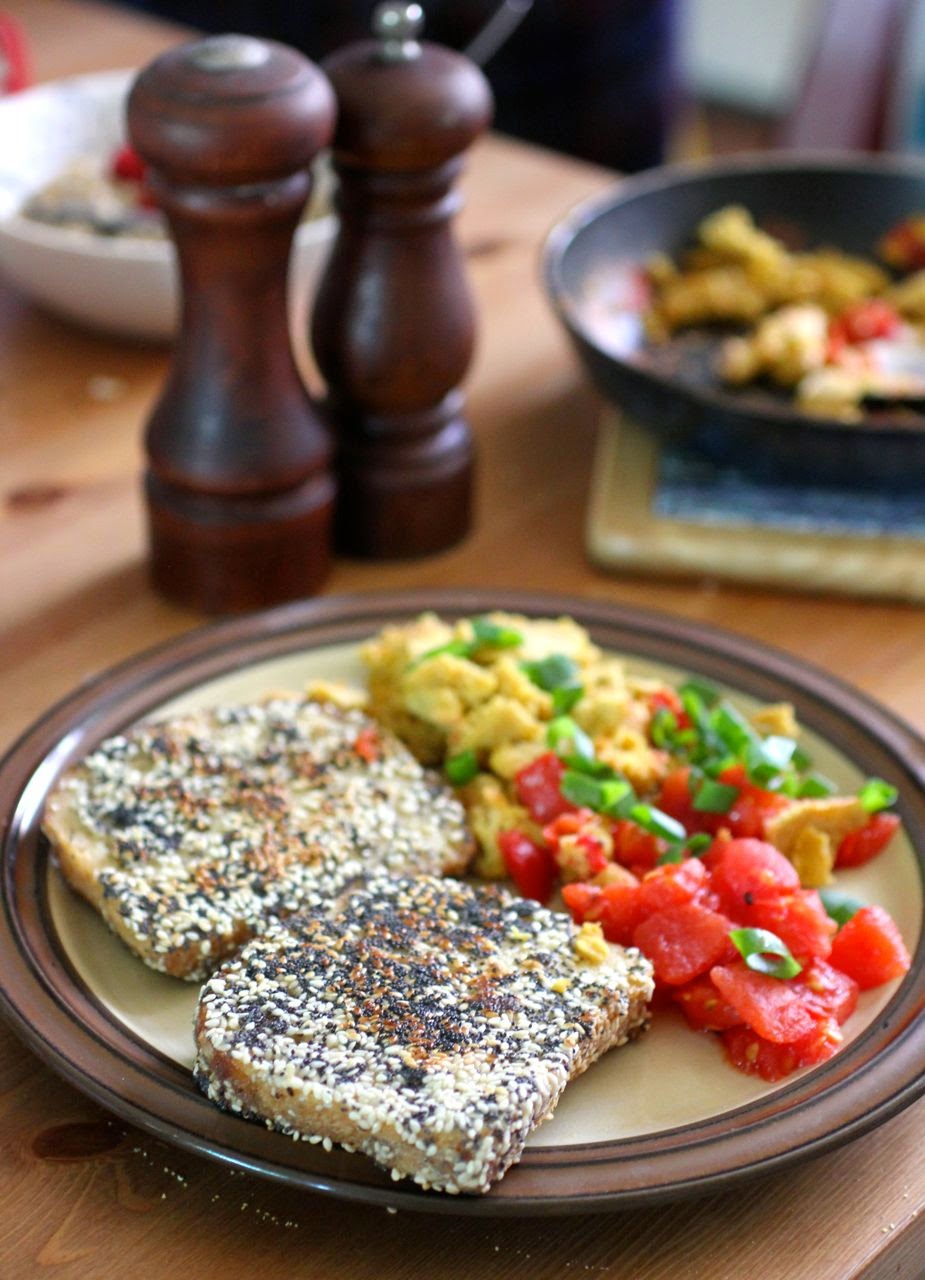 The chickpea scramble (which I made as before but without the vegetable add-ins) was great but I made it first.  In retrospect I think I should have made the French Toast first which takes longer to make and stays hotter longer.  Despite this, it was a delicious breakfast   And so filling that I didn't feel the need for a big lunch. 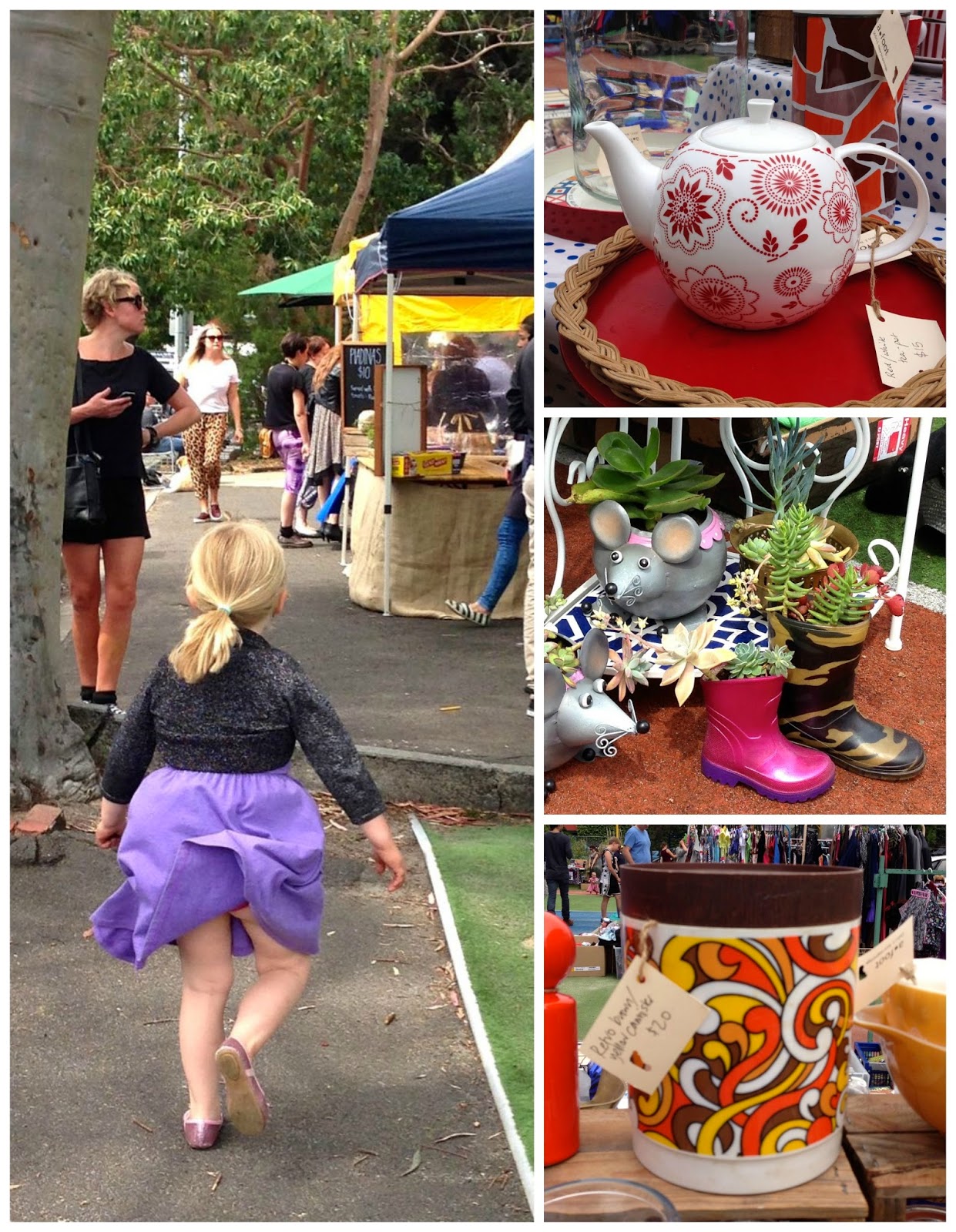 Lunch was at the Fitzroy Market.  We met some friends to enjoy ukeleles, sausages, plants in gumboots, paisley cookware, pad thai and icy poles (those pineapple, coconut and lime ones were amazing)!  The kids always love the playground and E can't resist a bargain secondhand CDs. 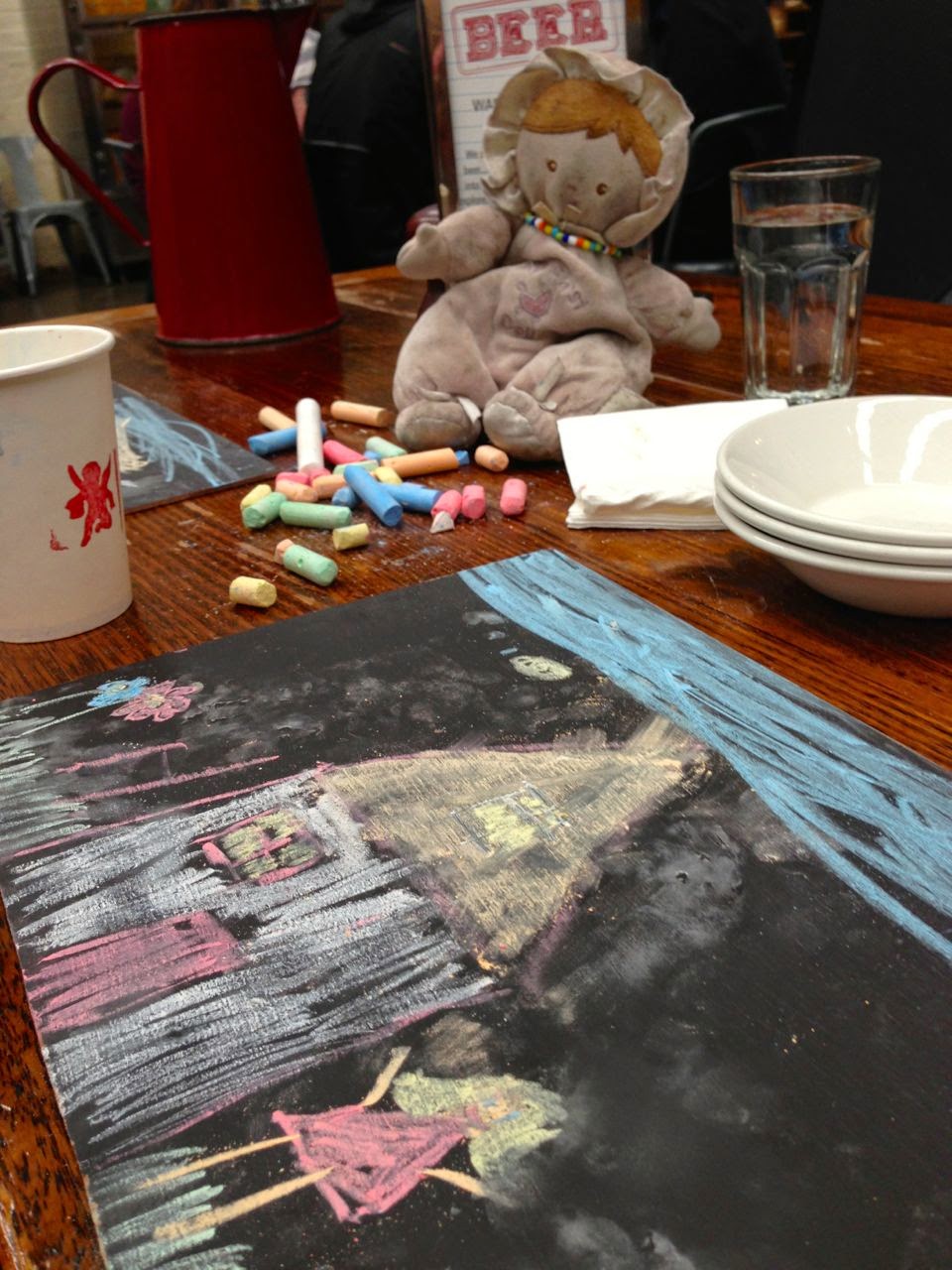 After the market, a few of us went to Little Creatures on Brunswick Street for salted caramel doughnuts, a cheese platter and chatter.  Or giggling, as was the case with the kids.  Once they had finished drawing on the chalkboards the staff gave them to play with.  When Sylvia's friend was told it was time to go, she asked if she could do one more silly thing with Sylvia before they went! 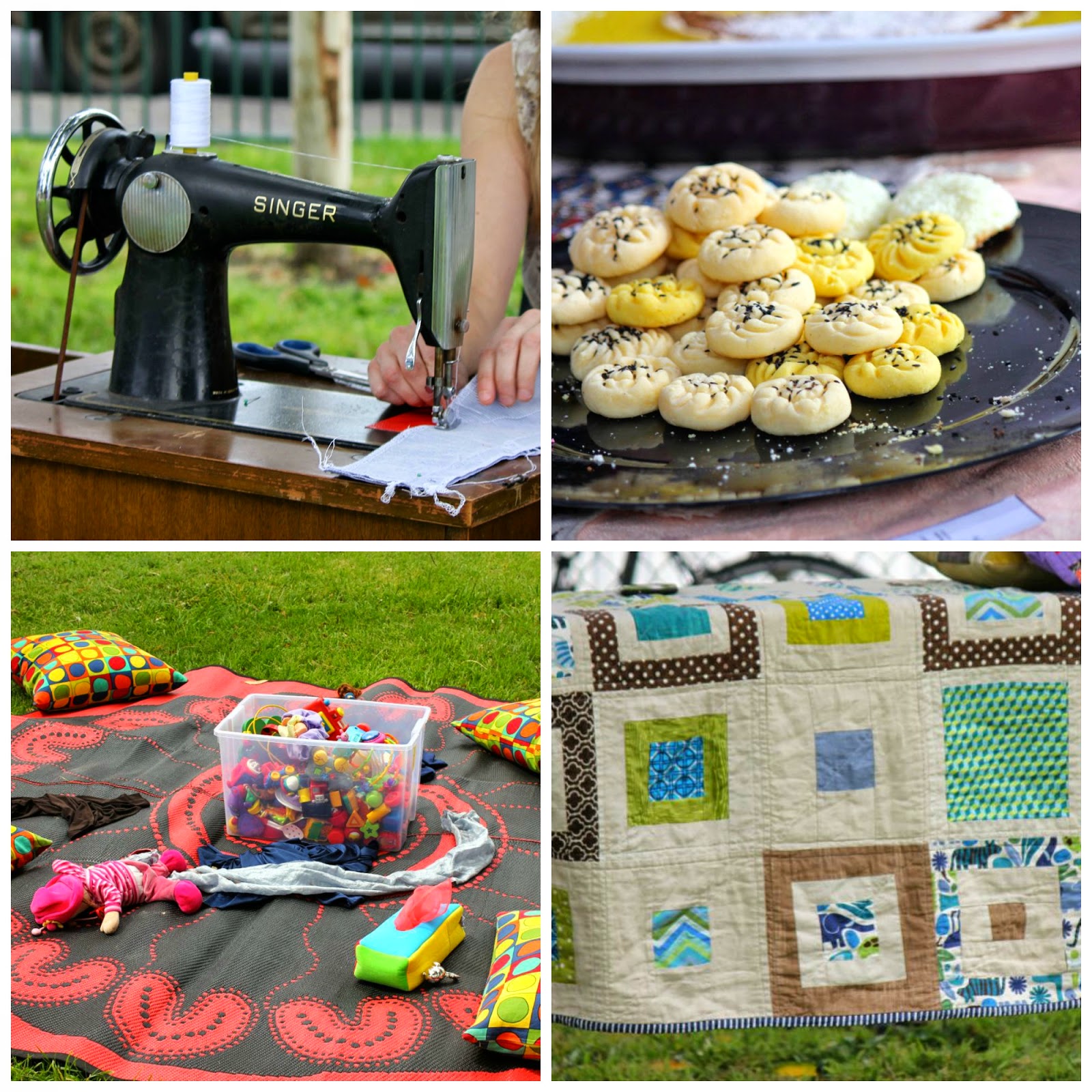 Sylvia would have had French toast again today but I was saving my energies for helping out with a Mellow Music in the park this afternoon.  It was a great relaxed day enjoying local musicians, Iranian food, kids toys, catching up with friends, and a pedal powered Singer sewing machine.  Lots of fun but lots of work too.  I am exhausted.

Mix chickpea flour, cornflour, chia seeds, milk and salt in a shallow dish.  Soak for 30 seconds.  Scatter sesame seeds and poppy seeds on a plate or lid and dip bread in it.  Heat frypan over medium heat and melt 1 tbsp of margarine.  Fry bread for 2 to 4 minutes or until golden brown.  Flip over and fry another 2 to 4 minutes until golden brown - add more butter if needed.  Serve hot.

Serving suggestion: serve with tomatoes fried with a bit of seasoning, chickpea scramble and chopped greens of spring onions.

Heat berries and maple syrup in a small saucepan until berries soften.  Set aside.  Mix flour, cornflour, chia seeds, milk and salt in a shallow dish.  Soak for 30 seconds.  Scatter coconut on a plate or lid and dip bread in it.  Heat frypan over medium heat.  Add olive oil and margarine.  Fry bread for 2 to 4 minutes or until golden brown.  Flip over and fry another 2 to 4 minutes until golden brown.  Serve hot with berry sauce.

On the Stereo:
Alas I cannot swim: Laura Marling
Posted by Johanna GGG at 21:56