I would love to tell you I decided to make an Aussie burger in dedication to the great Gough Whitlam, former Australian Prime Minister, who died this week.  Sadly I was not so organised.  I searched my cookbooks, found a recipe where I had the ingredients - well I had arame but not onion - and threw it together.  The first night I served the burgers on toast.  The second night I served it more traditionally in a bun. 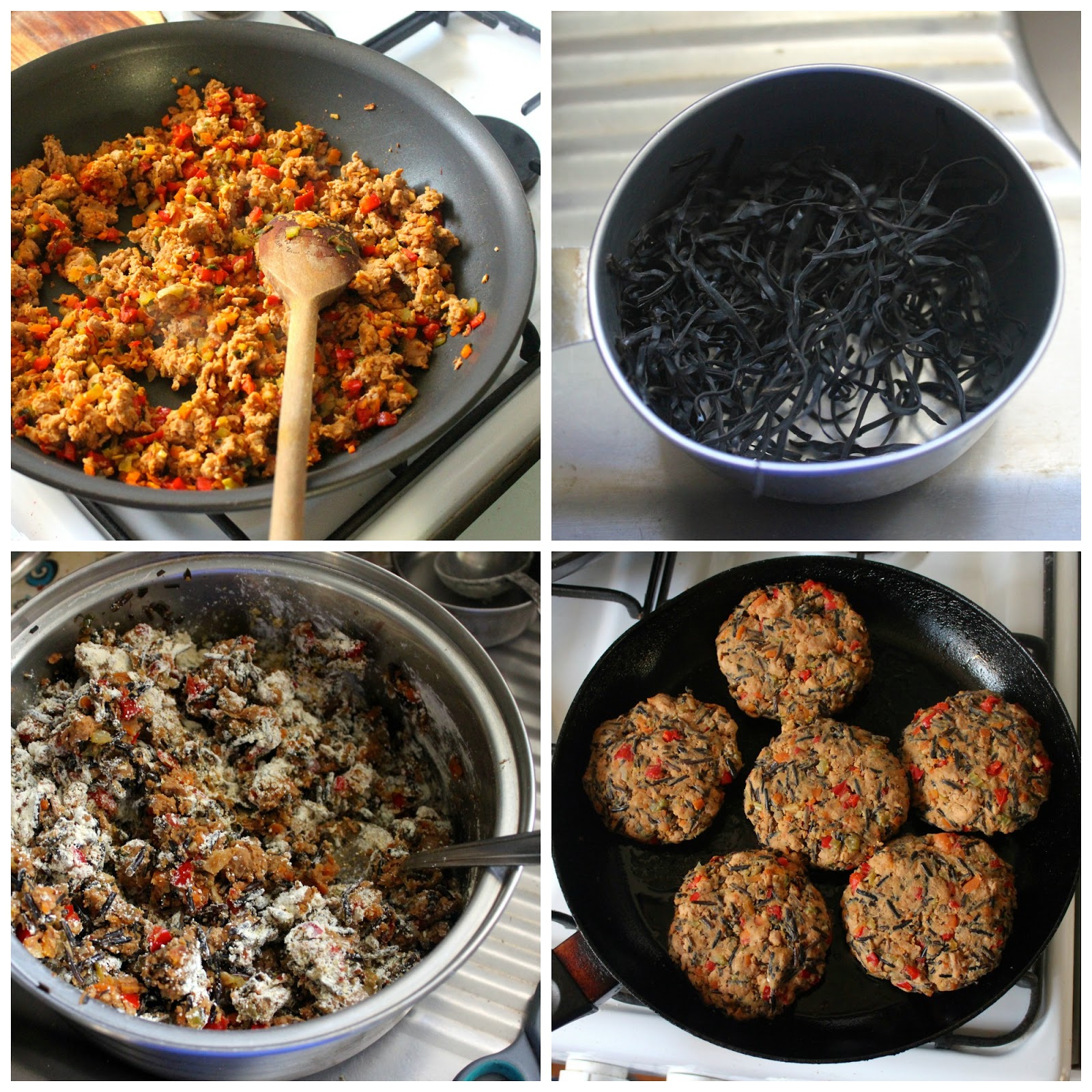 I did not choose the recipe because it was quick and easy.  It took a while.  It presented challenges.  The wild rice didn't go soft.  Measuring arame was hard so I eyeballed it.  My tempeh comes in a bigger package (which I have recorded in the recipe).  I meant to blend some of the mixture with my hand held blender as a nod towards the recipe that said to blend half of it.  But I forgot.  The mixture held together anyway. 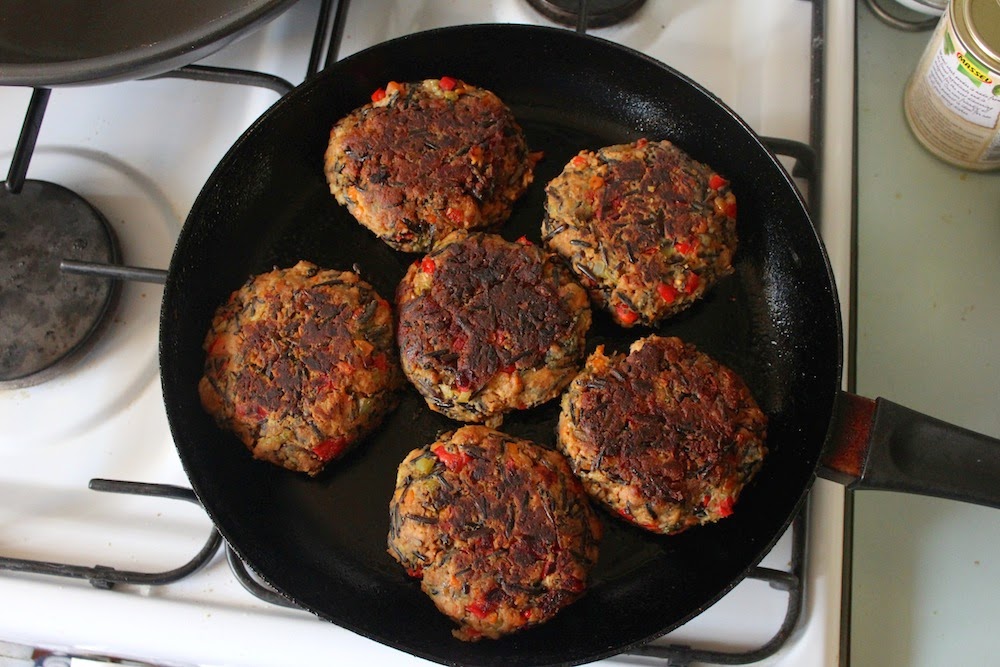 It was a warm day and my oven would never have done the burgers justice in 20 minutes so I fried them.  I had visions of lovely sides but they were substantial and my energy was low.  So it was a humble affair on toast the first night.  Then I bought some garlic focaccia buns.  (A little fancier than the burger with the lot that would have been in vogue at the time of Gough Whitlam!  And who would have had a vegetarian burger at that time.) 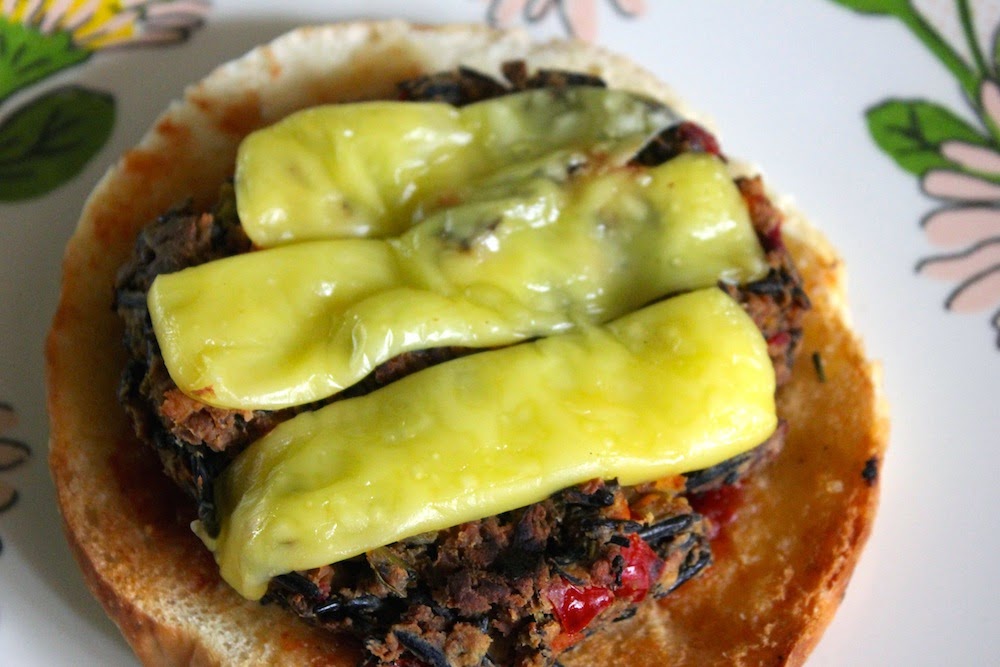 Not only did I have buns on the second night but I also had some biocheese from a visit to Mad Cowgirls Vegan Groceries.  You can see how lovely and melty it is with a little time under the grill (broiler).  I also grilled and buttered the buns.  A little trick I learnt from my mum.  It makes a difference.  Then I added tomato sauce, the cheese topped burger, tomato slices, lettuce and beetroot (from a tin).  It was only later I thought that fried onions would have been great.  However it was so filling and so delicious that they weren't necessary. 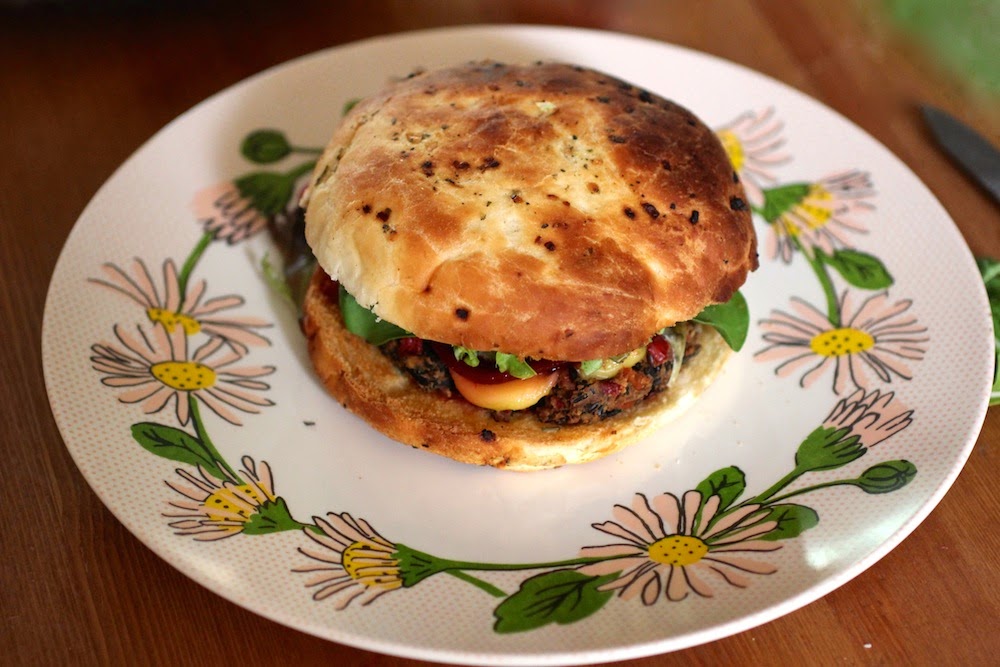 I ate the bun with my hands.  It was so good.  Probably would have tasted even better if Sylvia hadn't lain down and gone to sleep halfway through her dinner.  That was worrying.  I think we are all a bit under the weather this week. Am sure the burgers are full of healthy stuff that will help us along.  And they tasted delicious.  (Yes, delicious - do not be afraid of the tempeh!)  Really intense and tasty, a little umami and lots of interesting texture.

And now for some random notes:

Cook wild rice in a small saucepan with 1 and 1/2 cups of water until soft and cooked (about 40 to 50 minutes) and for another 10 minutes until mushy.  Cool.

Meanwhile heat oil in a large frypan over medium heat.  Fry onion, carrot, celery and red capsicum for about 5 minutes.  Add garlic, cumin, onion powder, garlic powder, salt and black pepper.  Stir for about a minute.  Crumble in the tempeh and add lemon juice, soy sauce, vinegar, liquid smoke and Worcestershire sauce.  Cook another 5 minutes stirring occasionally.  Remove from heat and set aside until cool enough to touch.  Use your hands to mix in cooked wild rice, arame, nutritional yeast and chickpea flour.

Form mixture into about 6 patties with your hands, using a little water to keep them damp so the mixture does not stick to you.  Heat frypan over medium high heat and add 1-2 tbsp of oil.  Fry patties for 3-5 minutes each side or until golden brown on both sides.  Add a little extra oil if needed.