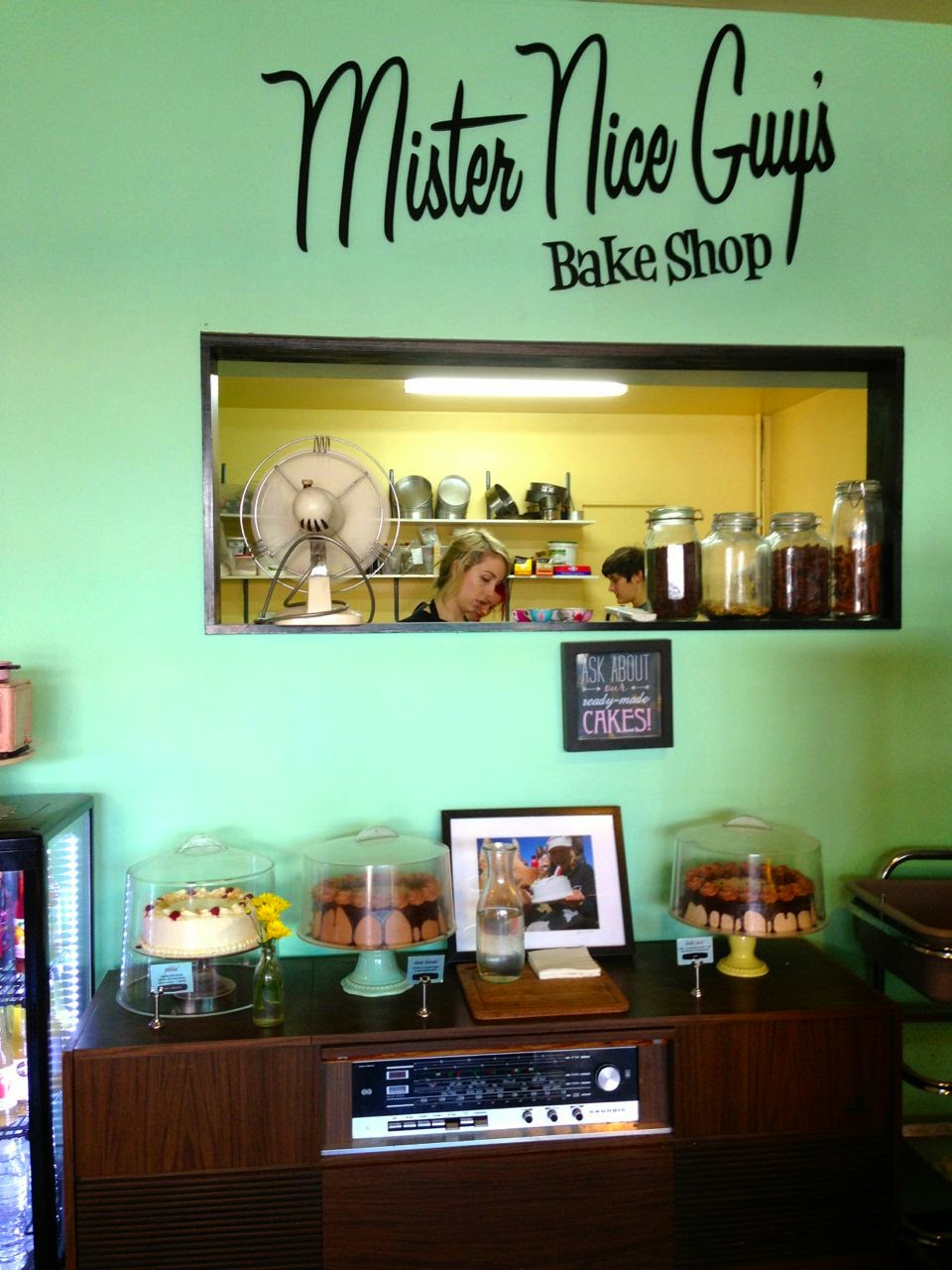 So on Monday, school goes back.  Two weeks of holidays have disappeared in the blink of an eye.  Busy days, indeed!  It was nice to have some play time on Friday with E and Sylvia.  We finally went to Mr Nice Guy's BakeShop and were most pleased with our lunch.  So I will tell you about our day and a bit more of what we did in the holidays. 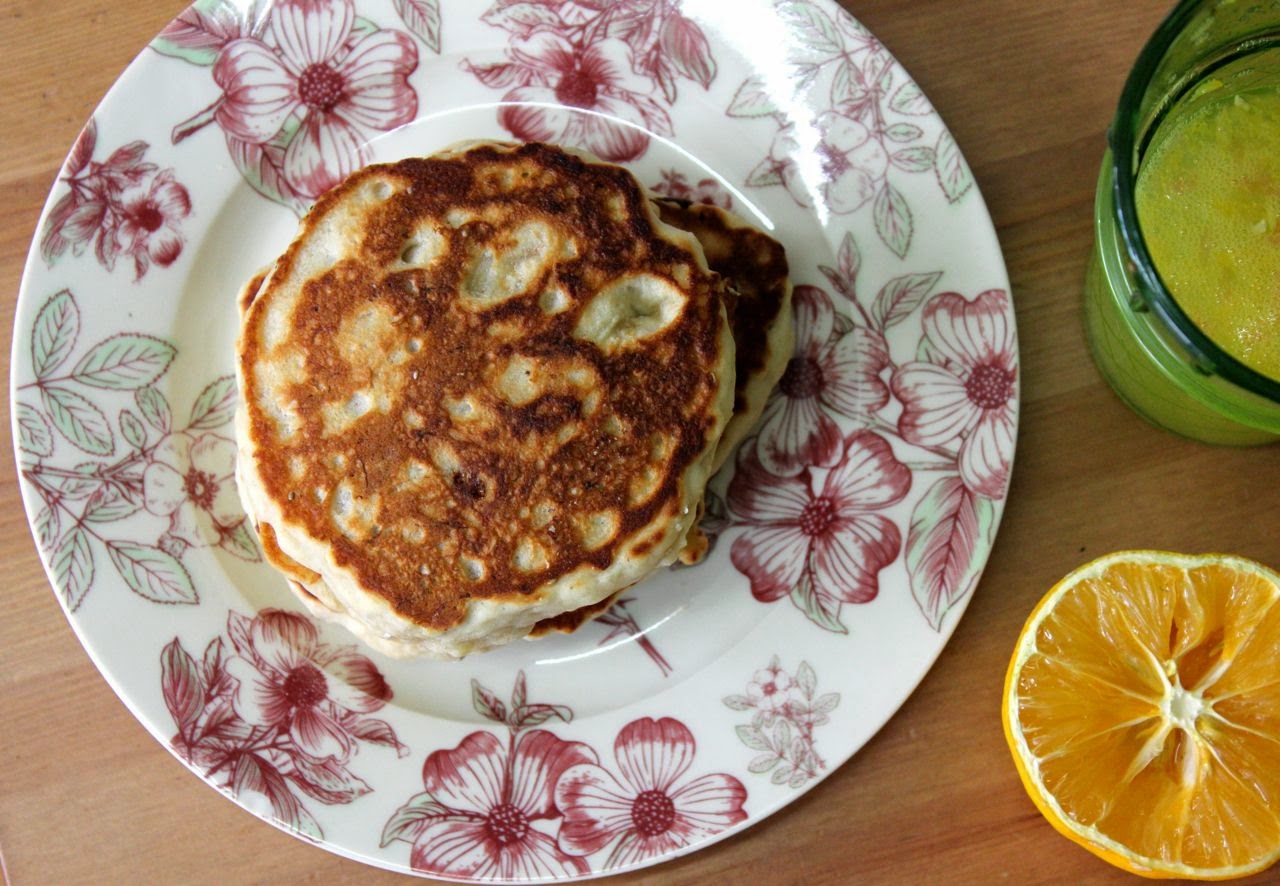 On Friday morning we had a manky banana calling out to be turned into pancakes.  However I didn't have any eggs.  It seems I was still in Vegan MoFo mode.  I turned to a home made powdered egg replacer recipe I bookmarked some time ago.  Instead of the egg in the banana oat pancakes, I used 1 tbsp potato starch, 1/2 tbsp tapioca starch, 1/2 tsp baking powder and 2-3 tsp chia seeds.  It worked so much better than my last attempt to veganise these pancakes.

We had a play at the park with some school friends and then headed off to the movies.  As those who have been following this blog will know, our car was stolen almost 6 weeks ago.  Happily we bought a new car on Thursday and had our first family outing in the car on Friday.  En route we stopped at Mr Nice Guy's Bake Shop for lunch.  I have wanted to go there for years and was sad I never made it to the Brunswick shop before it closed. 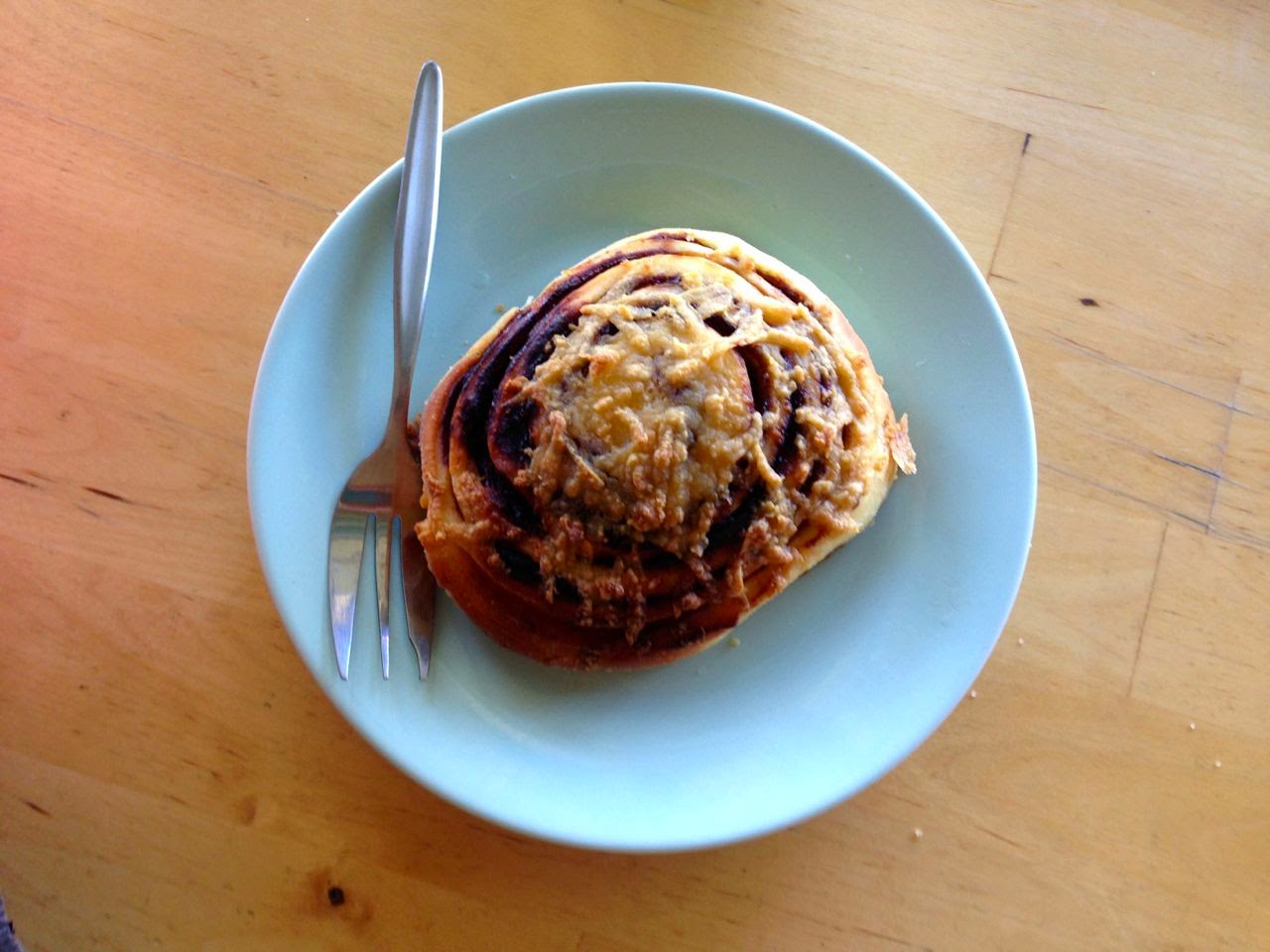 The bakeshop is all vegan with mostly sweet food.  If you are after gluten free, soy free, nut free or have other dietary requirements, you will find everything clearly labelled.  It sells lots of cakes and cupcakes with cute names such as Beetlejuice, Zombie brains and (my favourite) Unicorn milkshake.  There are also a few savoury options.

It was easy to decide what to get Sylvia for lunch.  Vegan cheesemite scrolls!  Oh yes!  She loves cheeseymite scrolls from Bakers Delight and eats them regularly.  So she was quite happy to have one here.  Despite all the cheese on top it had far more vegemite - a tad too much - than cheesey inside.  That was ok because the bread was so deliciously light and tasty.  (I know because we took the last bit of it home and I ate it later than night!  Which made me feel slightly better after some dinner in the shopping centre food hall.) 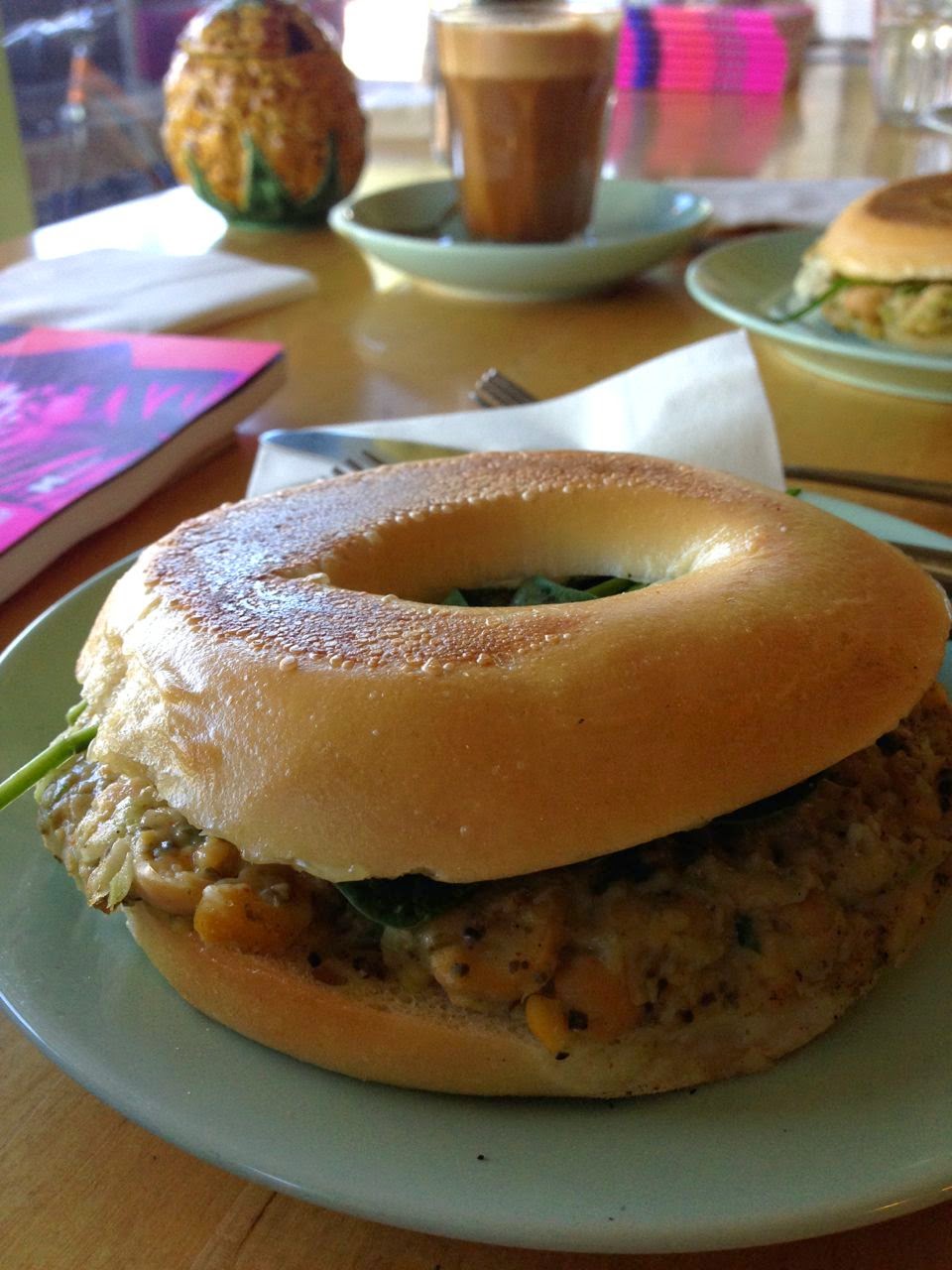 I was a little disappointed that there were no BLT bagels left.  Instead I passed over the 'egg' salad, roast vegies and turkey and went for a chickpea tuna bagel.  It was nice and rather filling.  However I found the slightly fishy flavour a little disturbing.  E chose the same bagel and loved it.  I think he is more used to the fishy flavour (which I have never been keen on) and the spice level was more to his liking than mine.  Not that it was too hot for me but it did leave me looking for my glass of water. 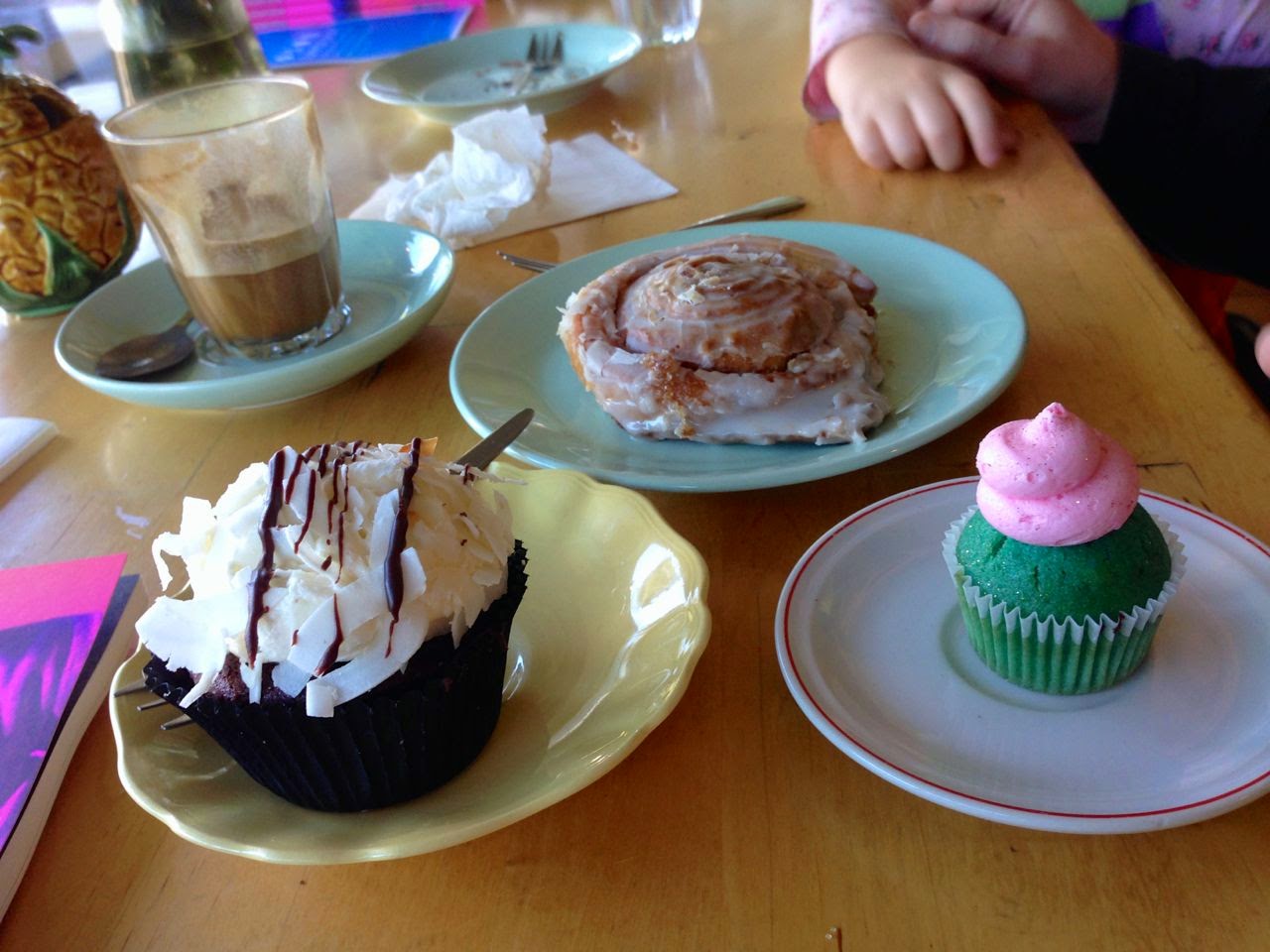 It was really the cakes that I was there for.  And it was a tyranny of choice.  I was very tempted by the brownie, GF chocolate cookies and cheesecake.  I was lucky enough to have a taster nibble of the cherry ripe slice which was so so yummy.  Yet I felt compelled to taste one of the beautiful frosted cupcakes.

Sylvia chose a cute little space cake.  Pink frosting on a blue vanilla cake.  I chose the Betty White.  Chocolate cake topped by coconut frosting and toasted coconut flakes.  It was a lovely fresh cake with a wee bit too frosting for me.  (According to the Facebook page, it was a gluten free cupcake.  If so, I would never have known!)  E hit the jackpot with the cinnamon scroll.  It was so good I had to restrain myself from fighting him for it.  He also enjoyed trying a latte with fresh cashew milk. 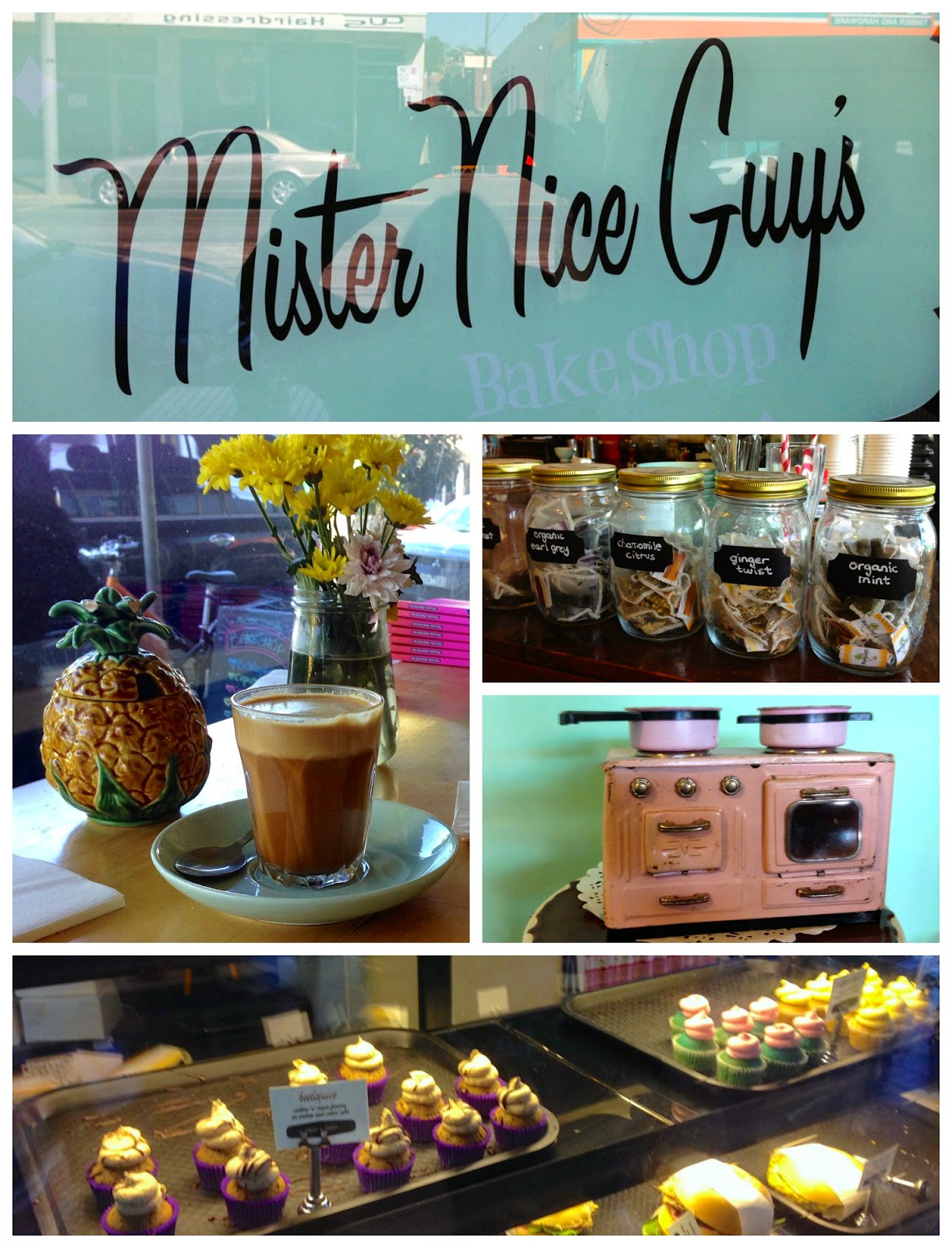 It was after suggesting that we go to Mr Nice Guy's that I casually mentioned to E that it was vegan.  He was not that bothered but I still wondered if he would enjoy it.  He came out raving about how good it was.  Which just shows that if you have excellent fresh food with interesting flavours, even a wary omnivore will love it.

As well as friendly staff, I really liked the ambiance of the place.  There were a stack of interesting vegan books to read.  And Sylvia was entertained by the cute mini toy ovens.  The bakeshop seemed quite busy on a Friday afternoon with a mixture of students, toddlers and workers.  I am sure we will be finding excuses to return to Ascot Vale just so we can visit Mr Nice Guy again. 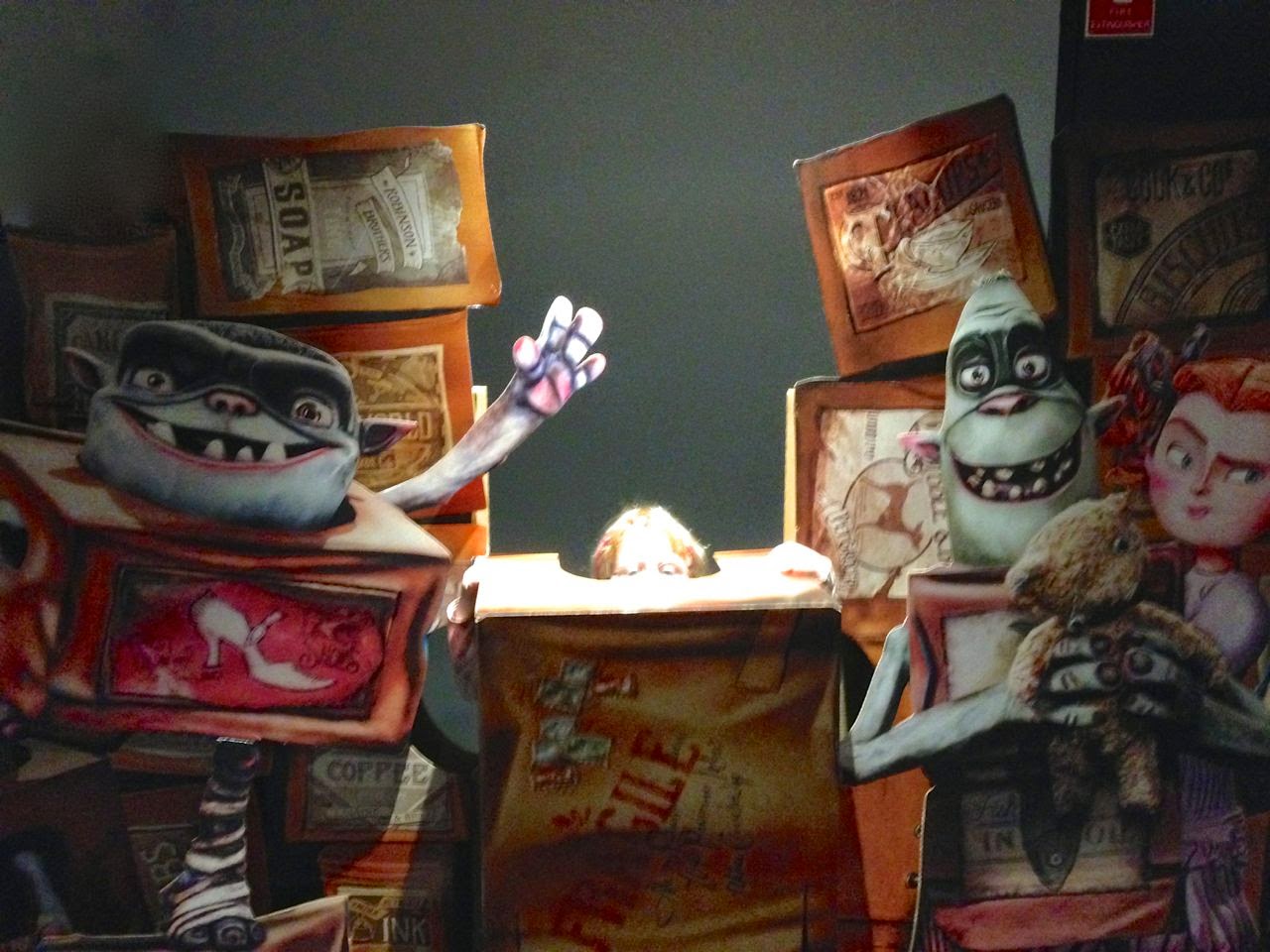 The reason we were passing through Ascot Vale was to go to see The Boxtrolls the cinema at Highpoint.  It is a film that inspires headlines such as "Sick, Twisted and Insanely Creepy", "Subversive Steampunk for kids" and "Morbid Marvel".  It was beautiful to watch in a dark sort of way, with lots of compassion, humour and great steam punk imagination.  The Snatcher character is fascinating for he is as pathetic as he is terrifying with his social aspirations and cheese allergy.  And I would love to see a vegan analysis of all the cheese in the film.

While out at Highpoint we also bought new child seats and a CD player for our 'new' car.  It may be new to us but it was made long enough ago that it has a cassette player! 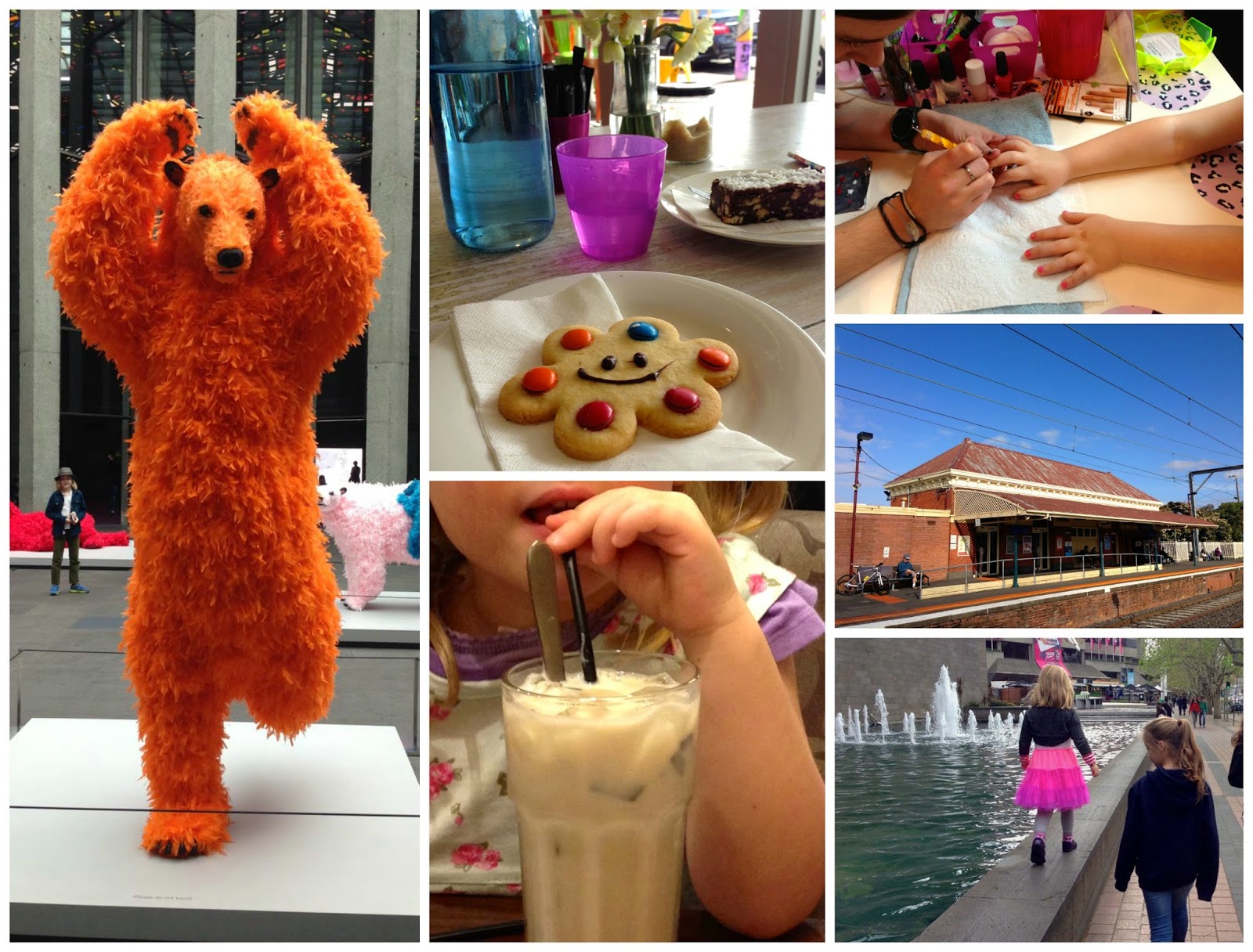 I will write more about my Adelaide and Port Fairy trips soon but meanwhile here is an overview of the rest of the School holidays: 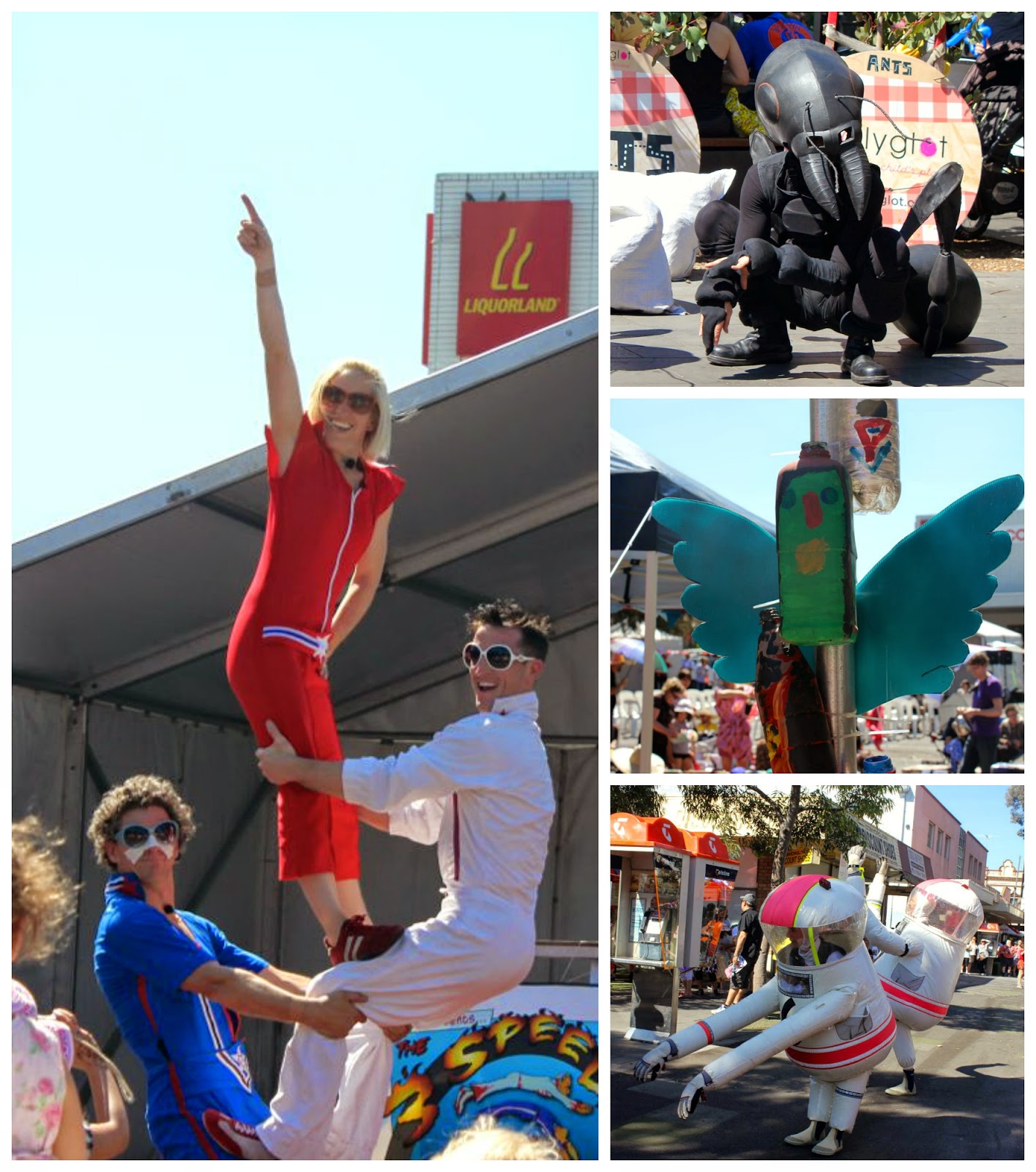 Yesterday we went to Coburg Carnivale so I will finish up with a few photos of the odd characters around the Victorian Street Mall.  E commented that the ants looked like characters from Dr Who.  I loved the recycled plastic bottle totem pole made by kids.  The space creatures were amusing and we were wonderfully entertained by the Dislocate acrobatics.  Sylvia caught up with friends, played with some circus stuff, made a badge, and had a go at the cycling to make enough energy to make popcorn.  Lots of fun.