Loaf and Lounge: Camperdown bakery, and the road to Port Fairy 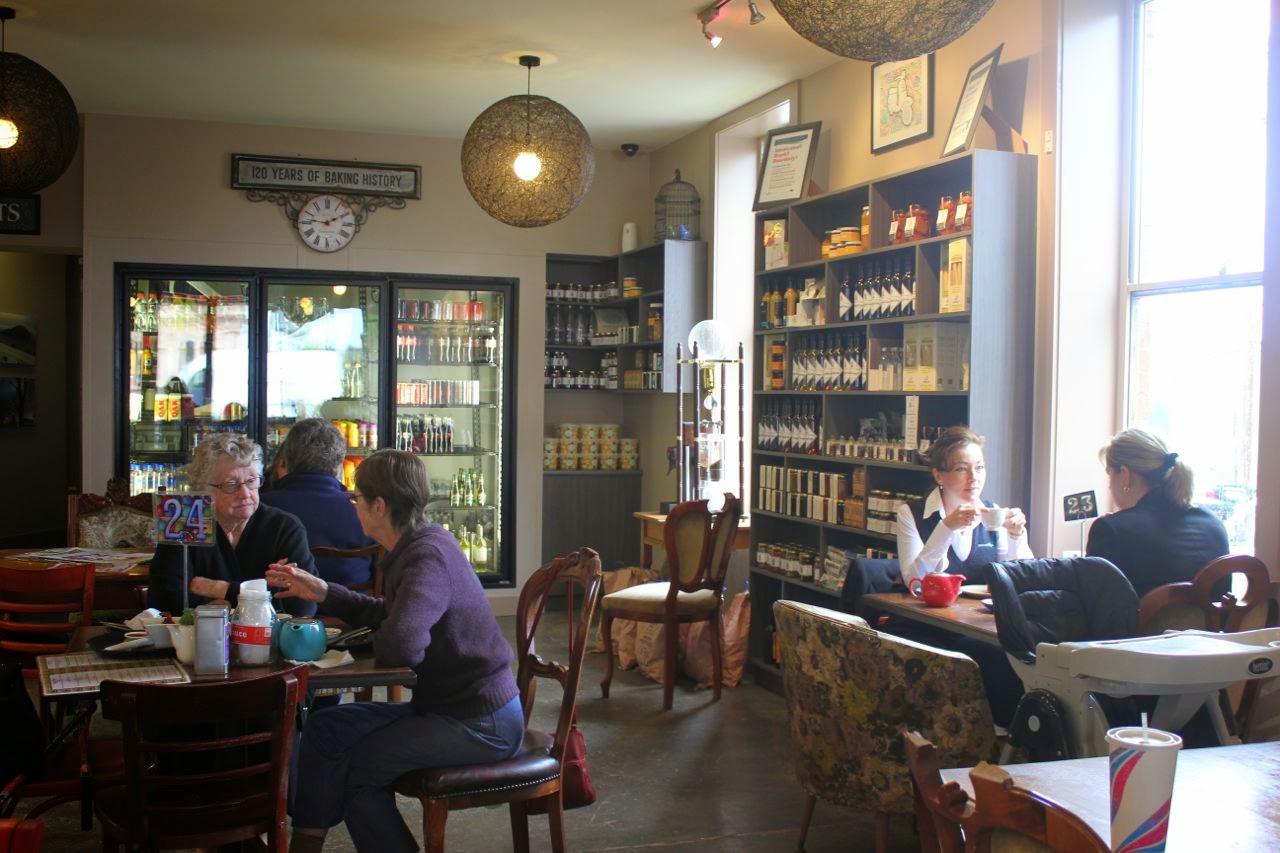 On our recent holiday, it was amazing to find a country cafe (The Farmers Wife Harvest Cafe in Port Fairy) that served kale salad.  Yet I was even more surprised on the way home when we discovered the Loaf and Lounge bakery in Camperdown which sold kale salad, raw cauliflower salad and green smoothies!  It was a pleasure to eat good fresh honest food that was more homely than mass produced. 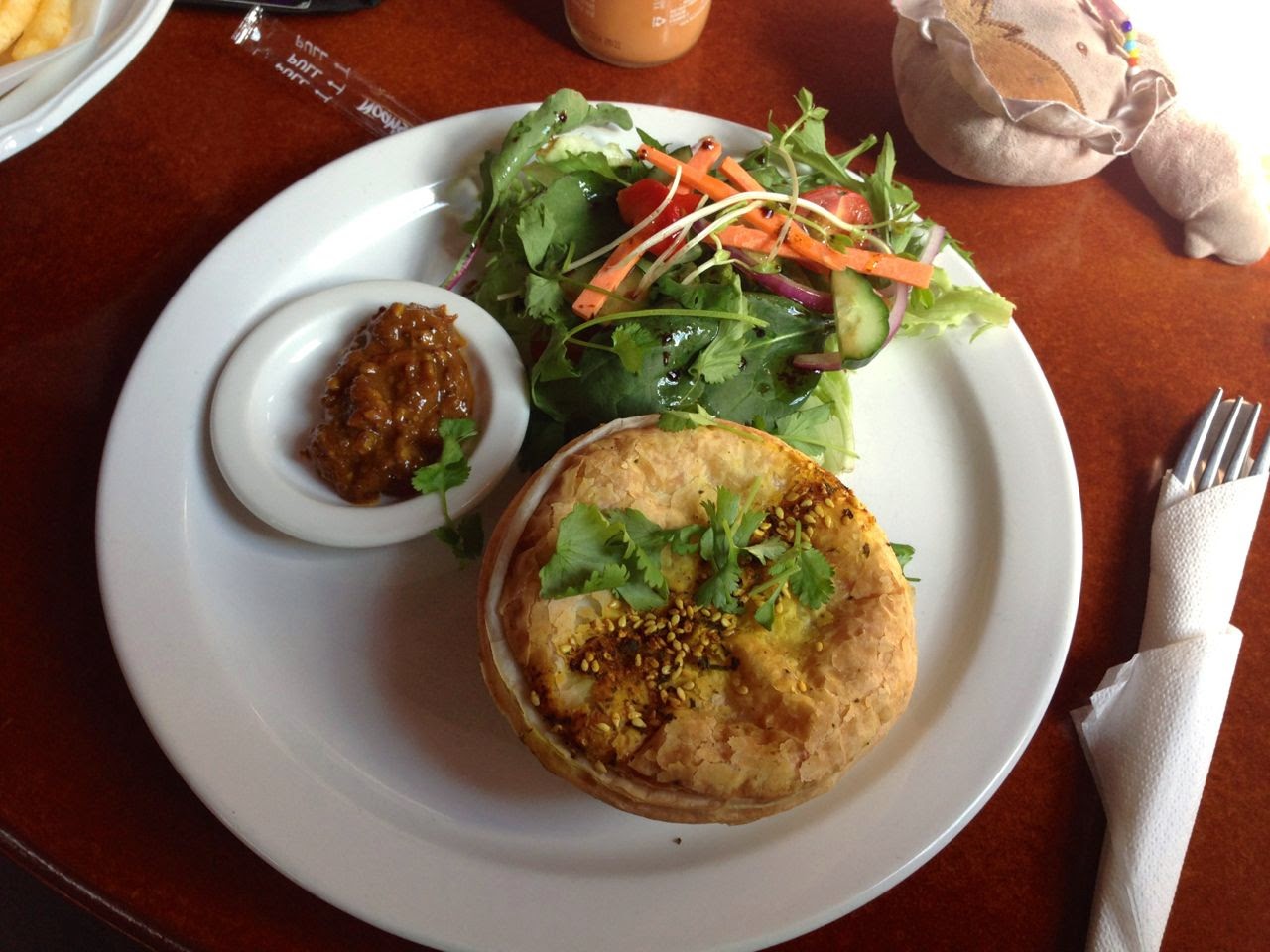 But let me backtrack to the start of our trip.  On the way down to Port Fairy, we stopped at the Winchelsea Shire Hall Tea Rooms where we had visited last time.  This time it was behind deep roadworks but charming nevertheless.  I had a korma pie with salad and chutney.  It was very nice but the salad was mostly greens.  Spending $13 seemed a lot for a pie with some lettuce leaves.  Yet I was still enjoyed being there and having a good meal.  Sylvia had the chips which were very good too and E had a focaccia. 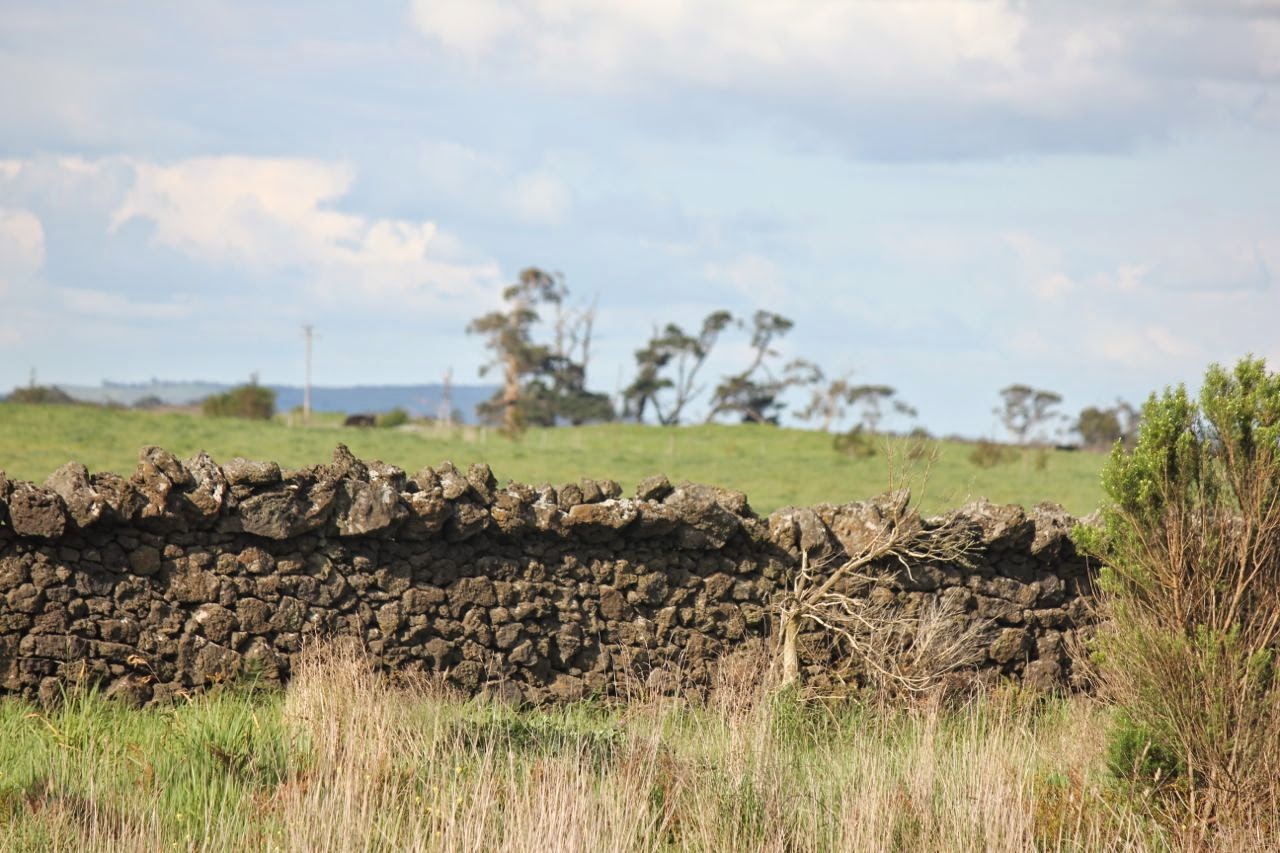 The rest of the drive to Port Fairy went rather quickly past the windmills and cows and green green fields.  No doubt it felt like we sped along because we didn't detour down the Great Ocean Road as we have on previous visits.  I had to stop to photograph the Stony Rises which, as I wrote about last year, make me all nostalgic for childhood trips down this way.  In fact driving along this part of the Princess Highway brings me past many places that bring back memories of people I have known throughout my life. 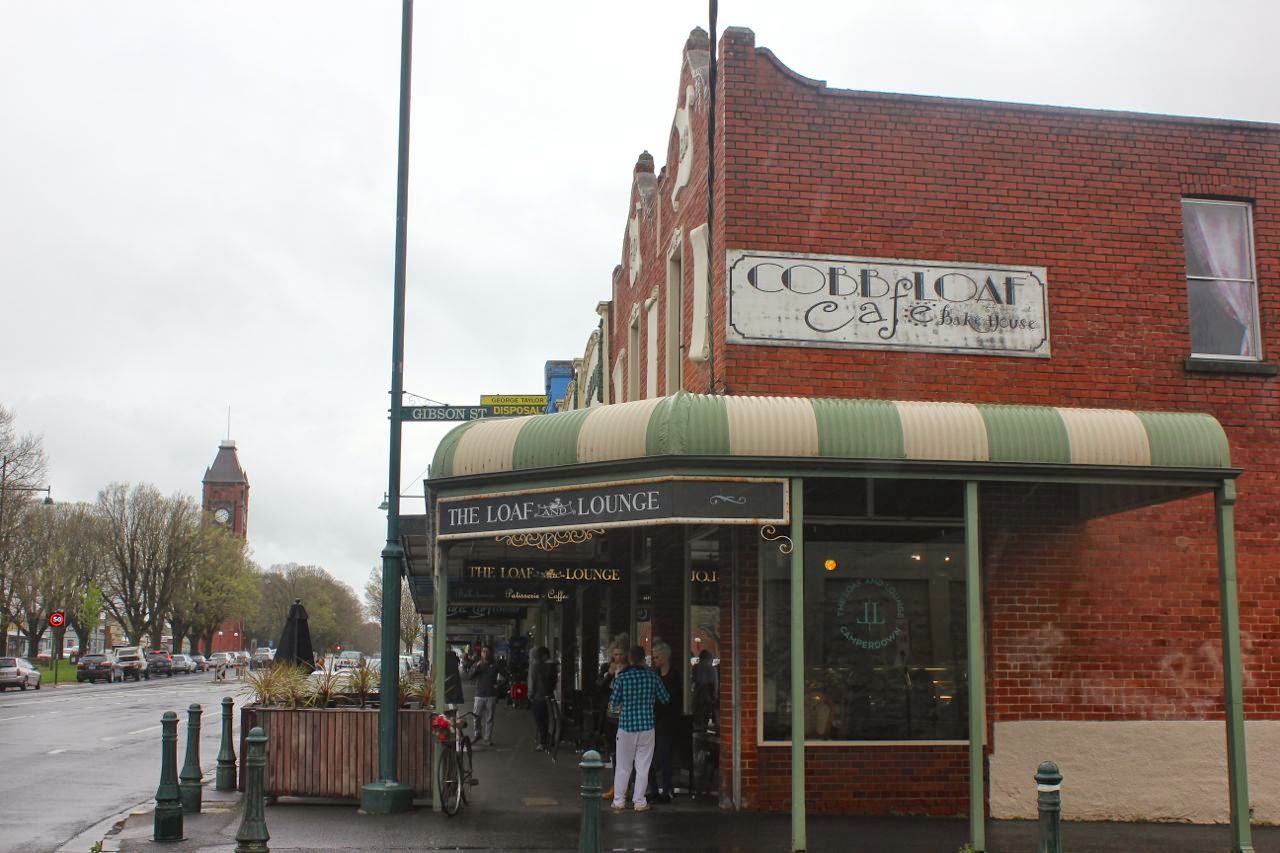 The trip home had not a hint of sunshine.  It was the sort of day on which we were just relieved if it stopped raining.  We looked at another cafe that looked interesting called Snout in the Trough but I had seen the Loaf and Lounge (above) which looked cosy and full of people enjoying their meal.  We had just got in there when the rain came on, so heavy and blown almost horizontally by the wild winds.  It was good to be on the inside. 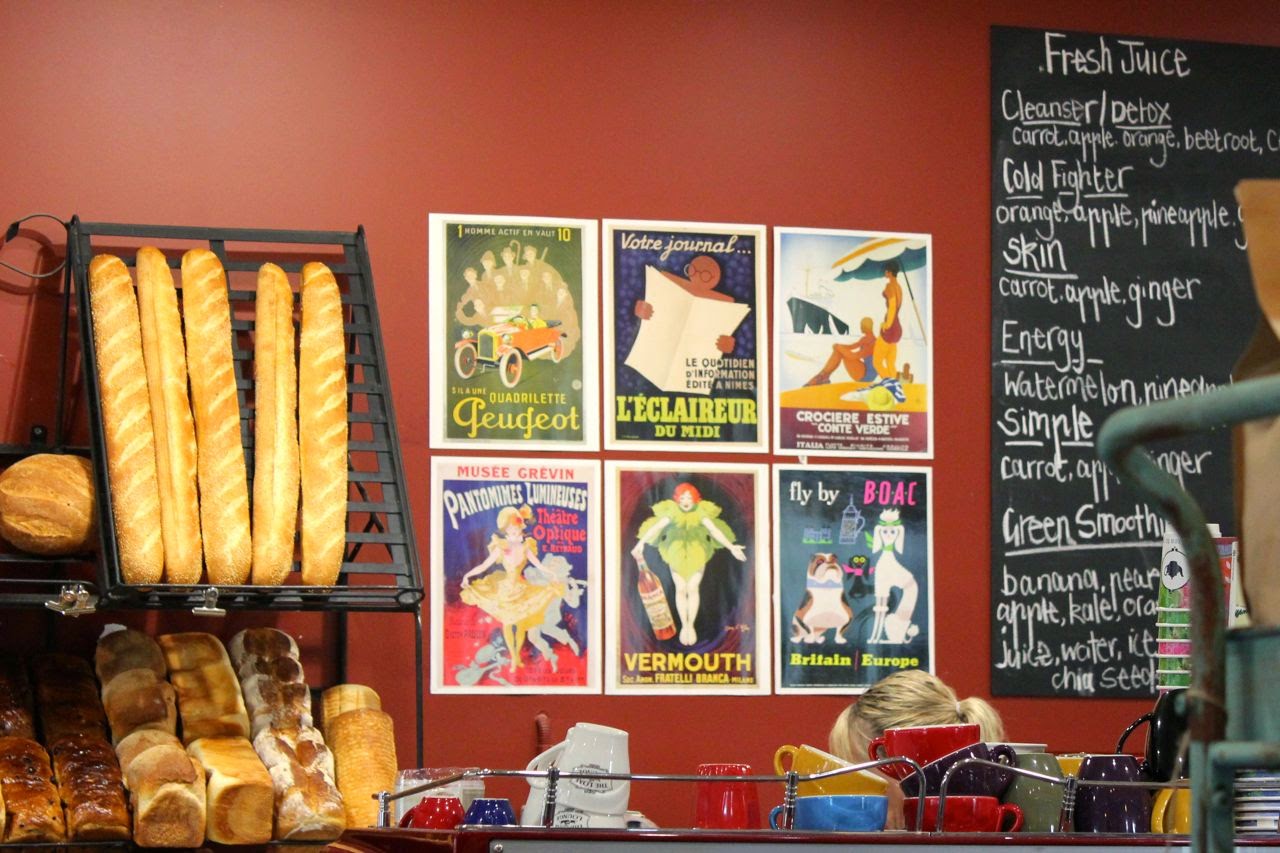 It was obvious when we stepped in that this was no ordinary country bakery.  The sort that rely on lots of icing and cream and custard with a bit of pastry or bun in between.  I have been in enough of those (like these).  This one had the standard pie warmer and loaves of bread and a counter display of colourful cakes.  Yet the walls were brightly painted and the room was furnished in elegant eclectic old tables and chairs that would be at home in a Brunswick cafe.  The juices on the blackboard looked really interesting and Sylvia was able to have sushi. 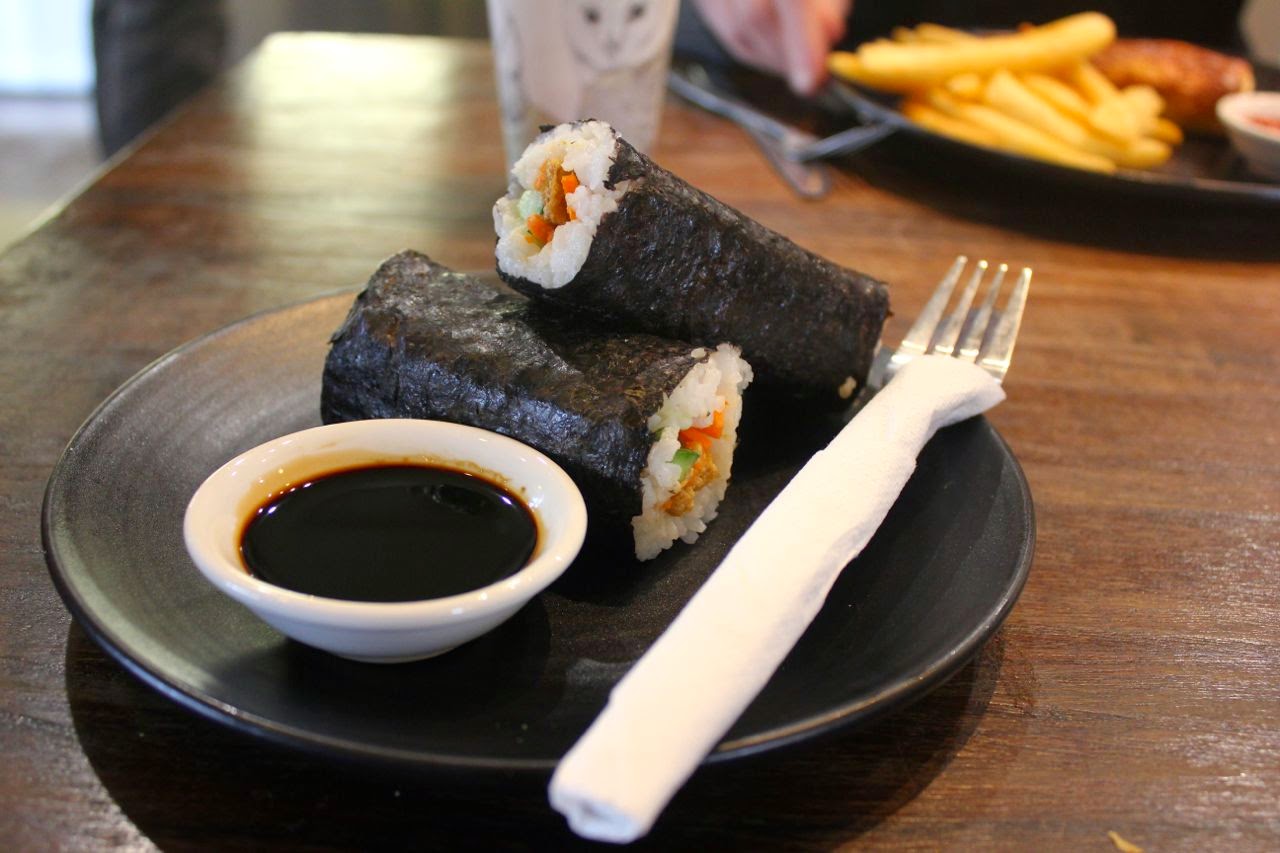 I spoke to the woman behind the counter and asked for advice on what to eat.  I could have had a sandwich or baked beans but wanted something else.  She advised to have some salad with a pastie.  I was amazed that the salads were kale salad and raw cauliflower rice salad. 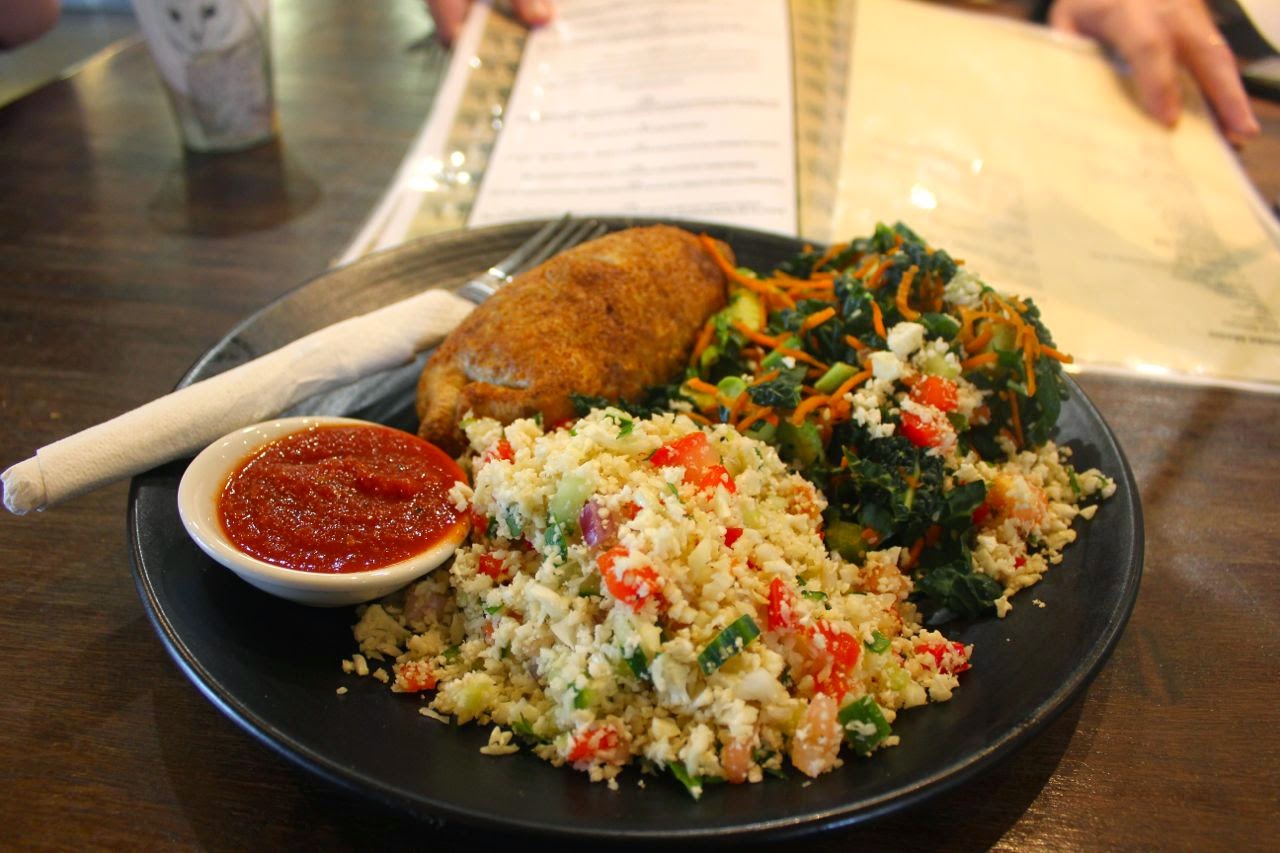 Even the pastie wasn't the usual pastie with the regular bakery flaky pastry.  This pastry seemed home-made and more substantial.  If only every pastie came with such healthy salads.  My only problem was that they served the salad without any dressing.  When I asked a waitress she returned promptly with a little bowl of dressing.  The salads weren't full of lots of interesting ingredients like in the Farmer's Wife but they were packed with fresh vegies.  It was great to feel like I had eaten well on the road. 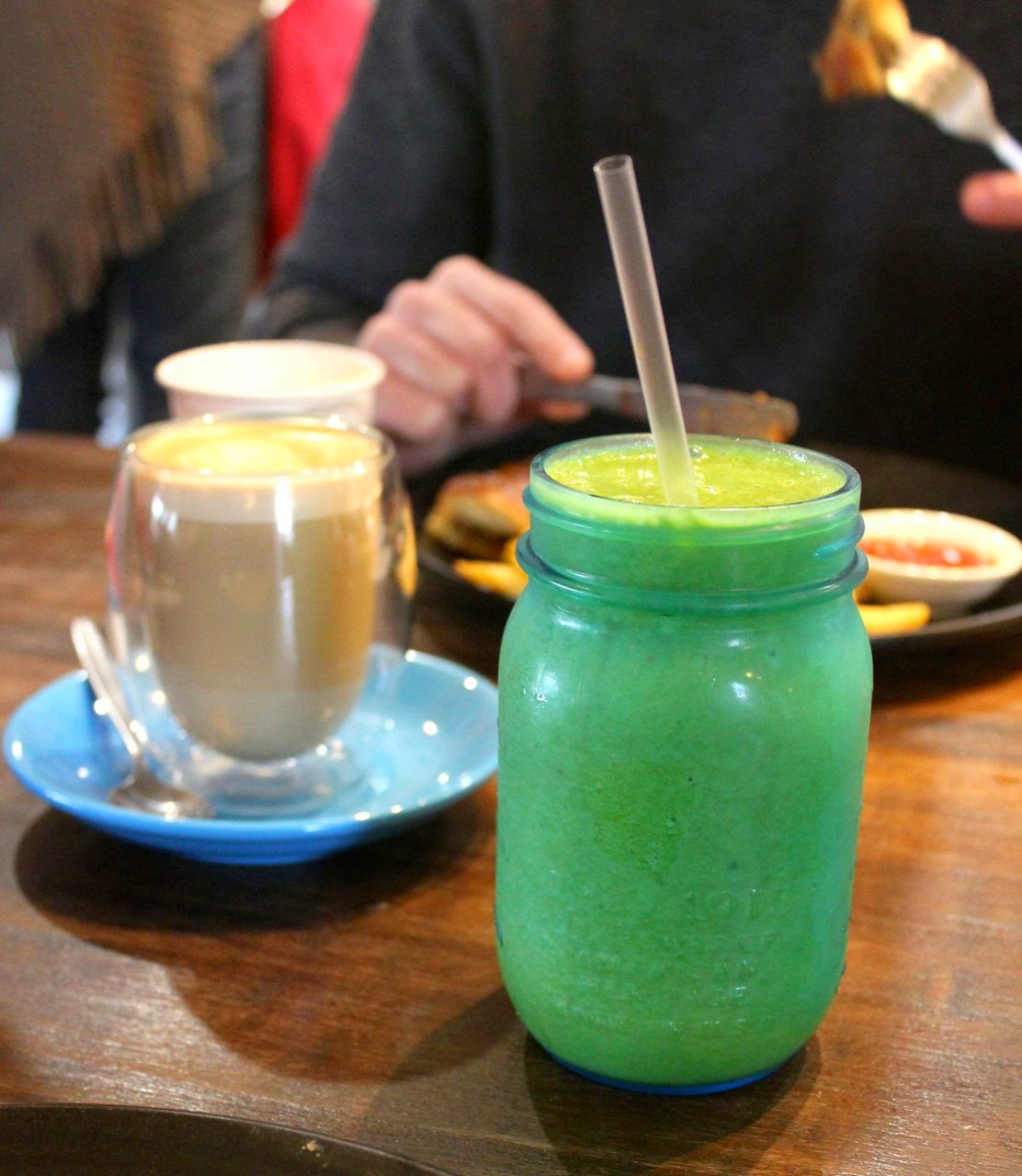 E had sausage roll and chips which he spoke highly of and he enjoyed his coffee.  Sylvia had her heart set on a strawberry milkshake which came in a huge paper cup she could not finish.  I was delighted with my green smoothie made of banana, apple, kale, orange juice, chia, water and ice.  Like Sylvia's drink, it was huge but so good. 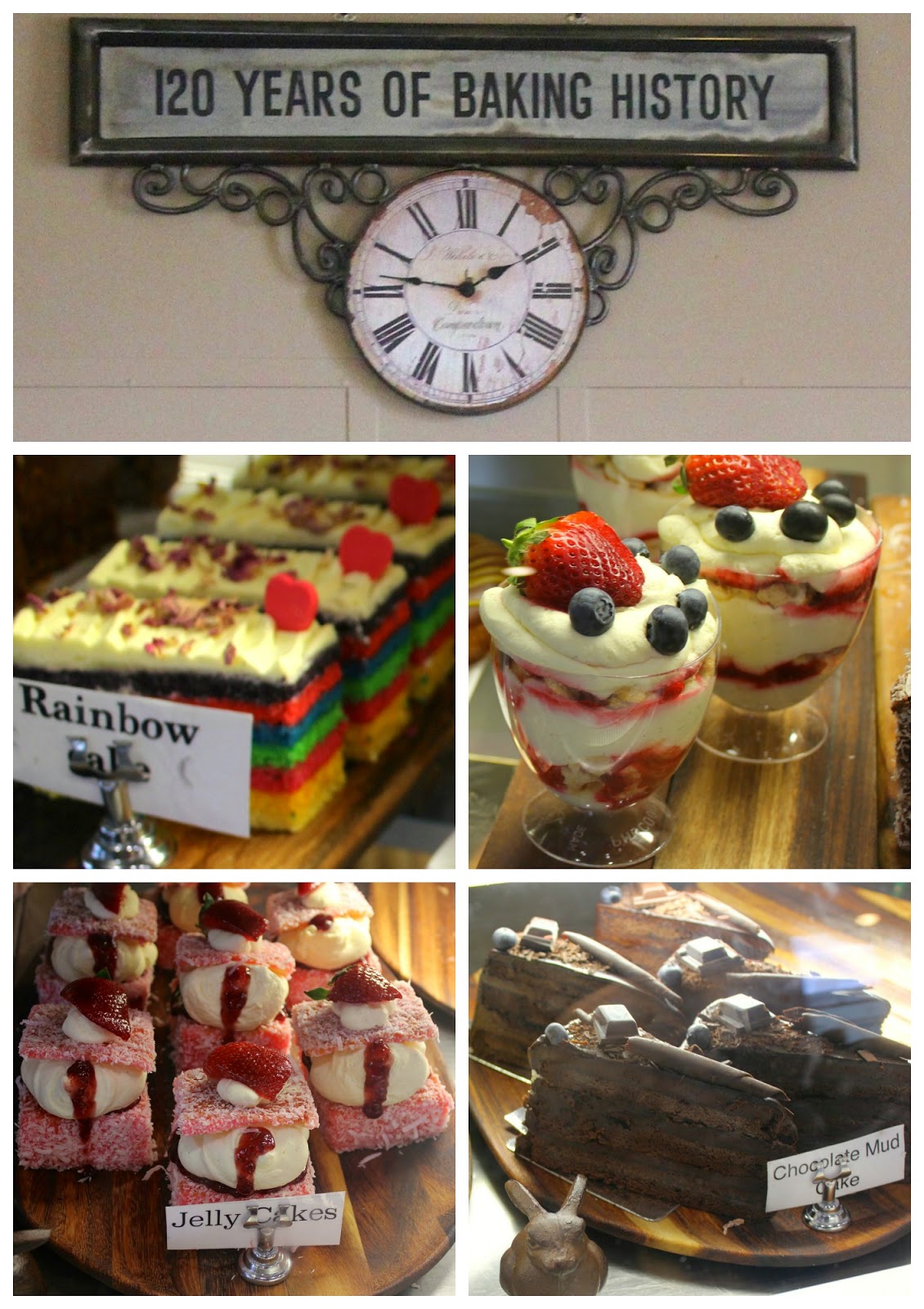 After lunch, though we had eaten well, the cake cabinet beckoned.  It was full of colourful sweet treats.  Sylvia chose a green stripey doughnut, I had a coffee scrolls and E had a vanilla slice.  The doughnut was lovely and fresh.

At the counter there was some discussion of whether coffee scrolls have coffee in them.  I don't like coffee so I check, though I know most don't.  It was not the usual puffed up soft sweet bread roll.  It was denser and more chewy.  I enjoyed it though it had too much icing for me.

E hit the jackpot with an amazing vanilla slice.  Vanilla slice is something that gets done really badly in bakeries too often. The custard can be a colourless gell.  (Why else do they call them snot blocks!)  This one had magnificent creamy thick custard with a thick layer of good flaky pastry and pink icing. I am not usually a fan of vanilla slice but when I tasted his one, I almost wished I had ordered one myself. 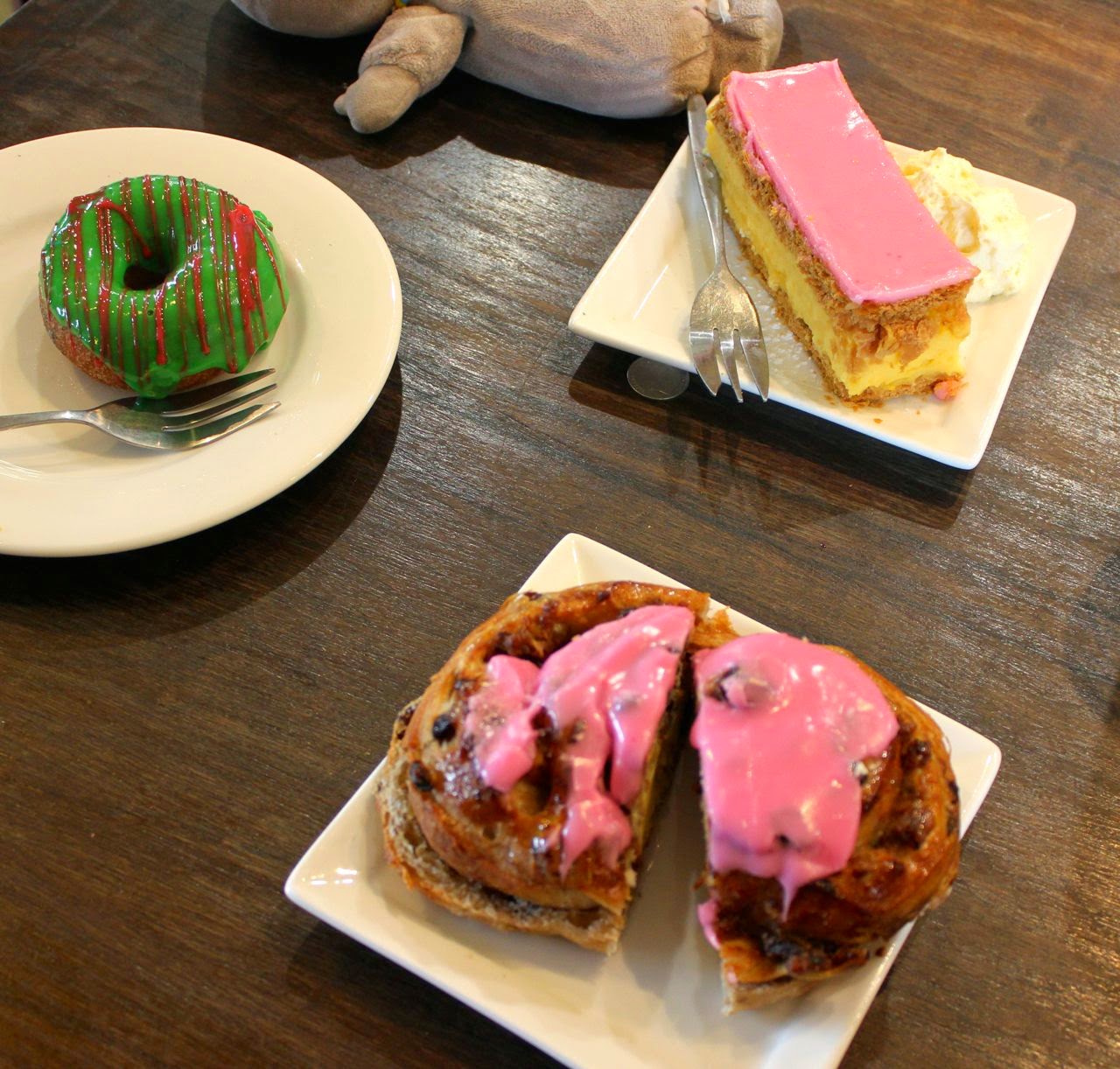 I did think about buying my dad a piece of vanilla slice and perhaps purchasing some of the jams and chutneys on the shelves.  However I got distracted by the drama of the little girl locked in toilets and the burly tradie who used his screwdriver to get her out. 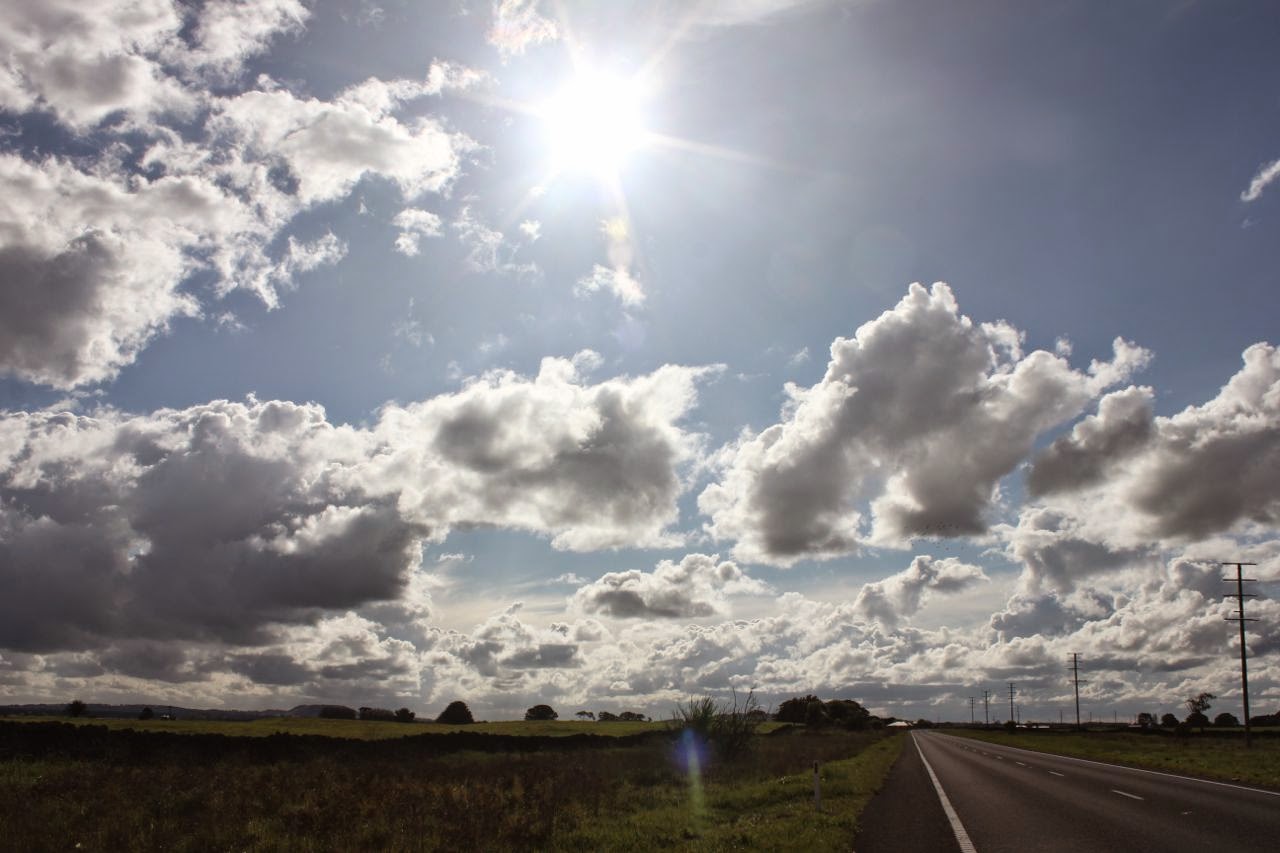 Then we got back into our car and headed back home via my parents' place in Geelong.  We were glad to go home given that the lovely sunny days of our holiday had gone all gloomy and grim on us.  I didn't take any photos on the way home but will leave you will a photo I took of the impressive clouds on the way to Port Fairy.