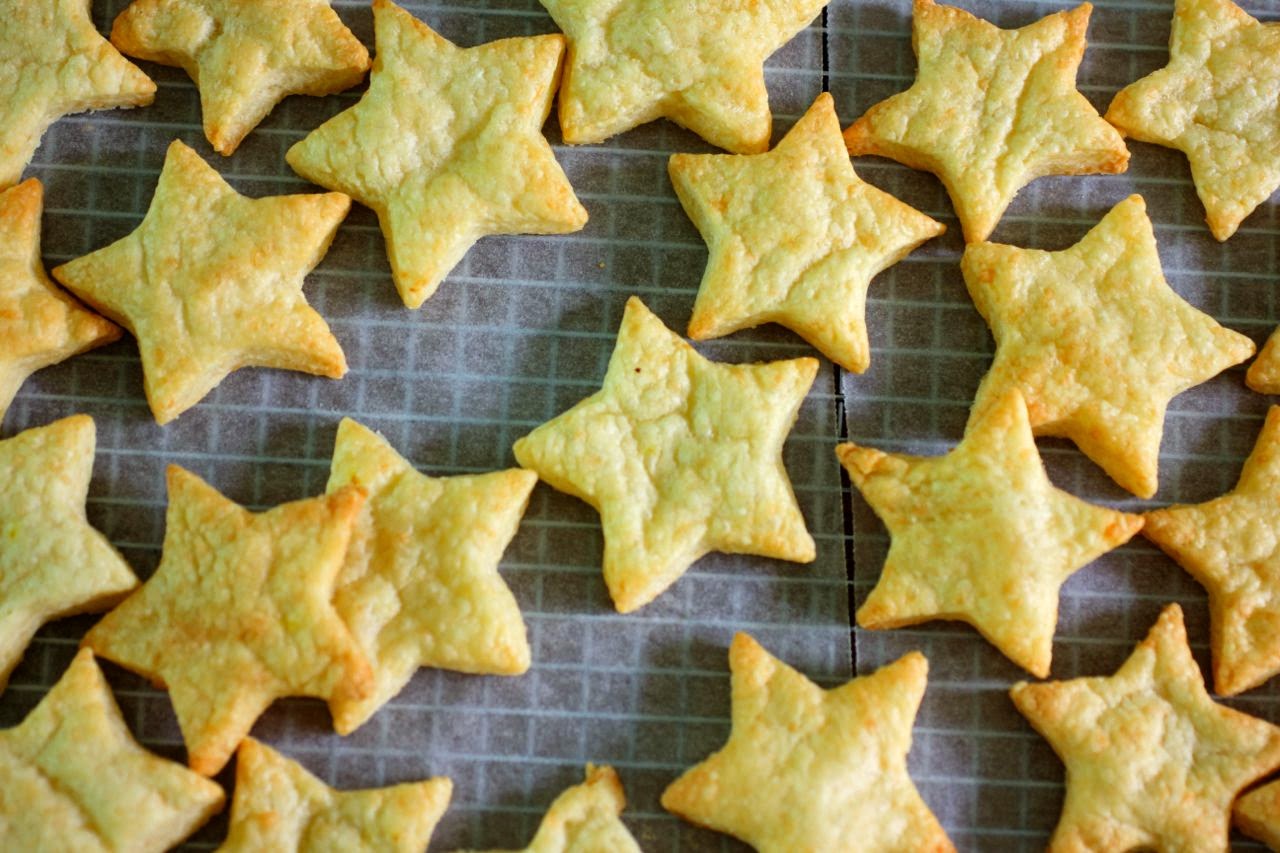 September was such a crazy month with Vegan MoFo, the saga of the stolen car, and all manner of celebrations and goings-on.  Let me start this peek into my kitchen with Nigella's cheese stars.  (A bit like these or these.)  I made them for a cake stall at Sylvia's school concert.  I was glad they cooked well as I regret the same could not be said of a slice that went to the stall.  It was edible but should have been cooked better if only my timing had been more vigilant.  (Sometimes the timer is mightier than the skewer.) 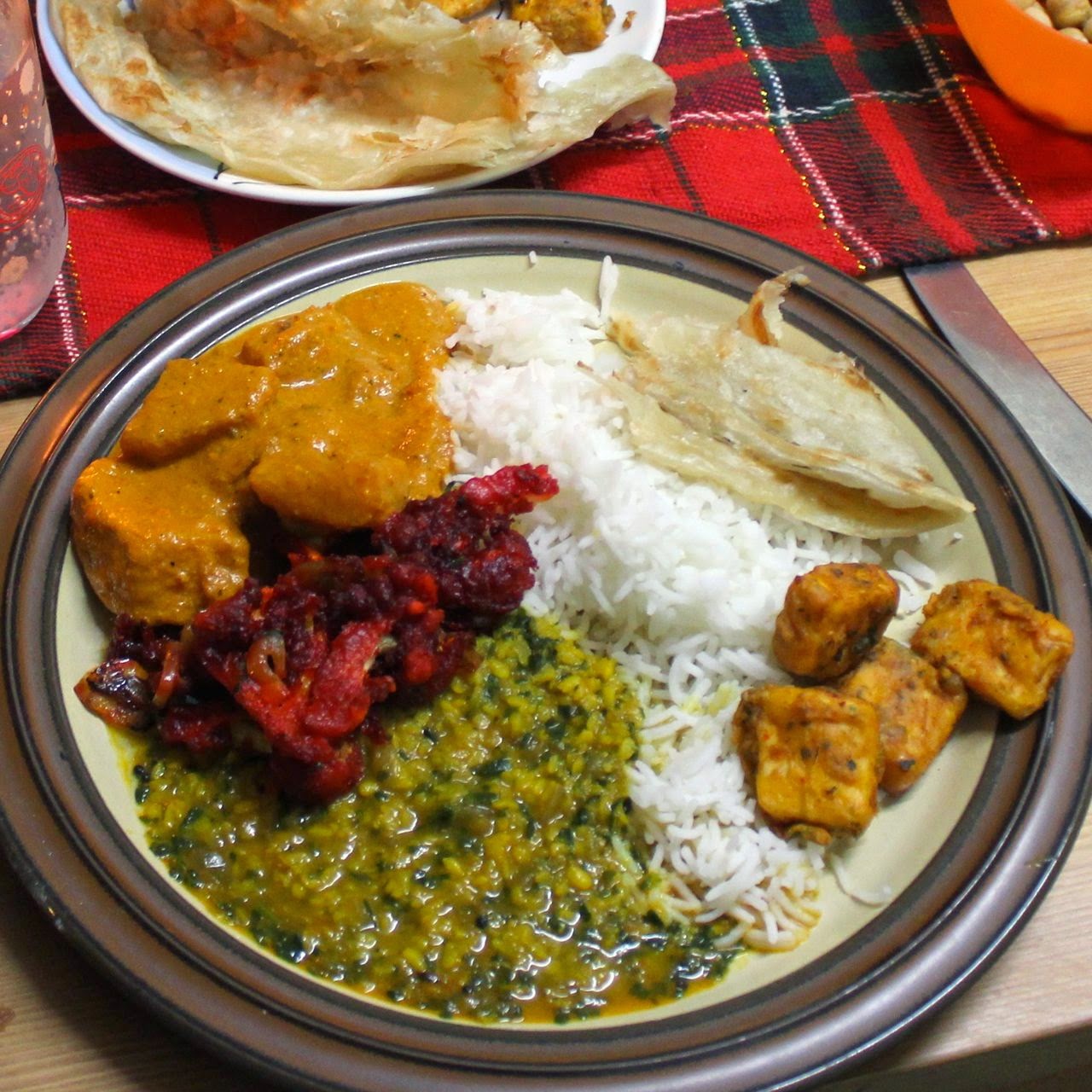 It has been a long time between takeaway dinners.  We like to eat out regularly but it is often hard to justify (or organise) takeaway dinners when I usually have so many vegetables about.  I rode my bike down to Malabar Hut after spending the day searching for a car to buy.  It was a magnificent meal that cheered me up when I really needed to remember the good things in life. 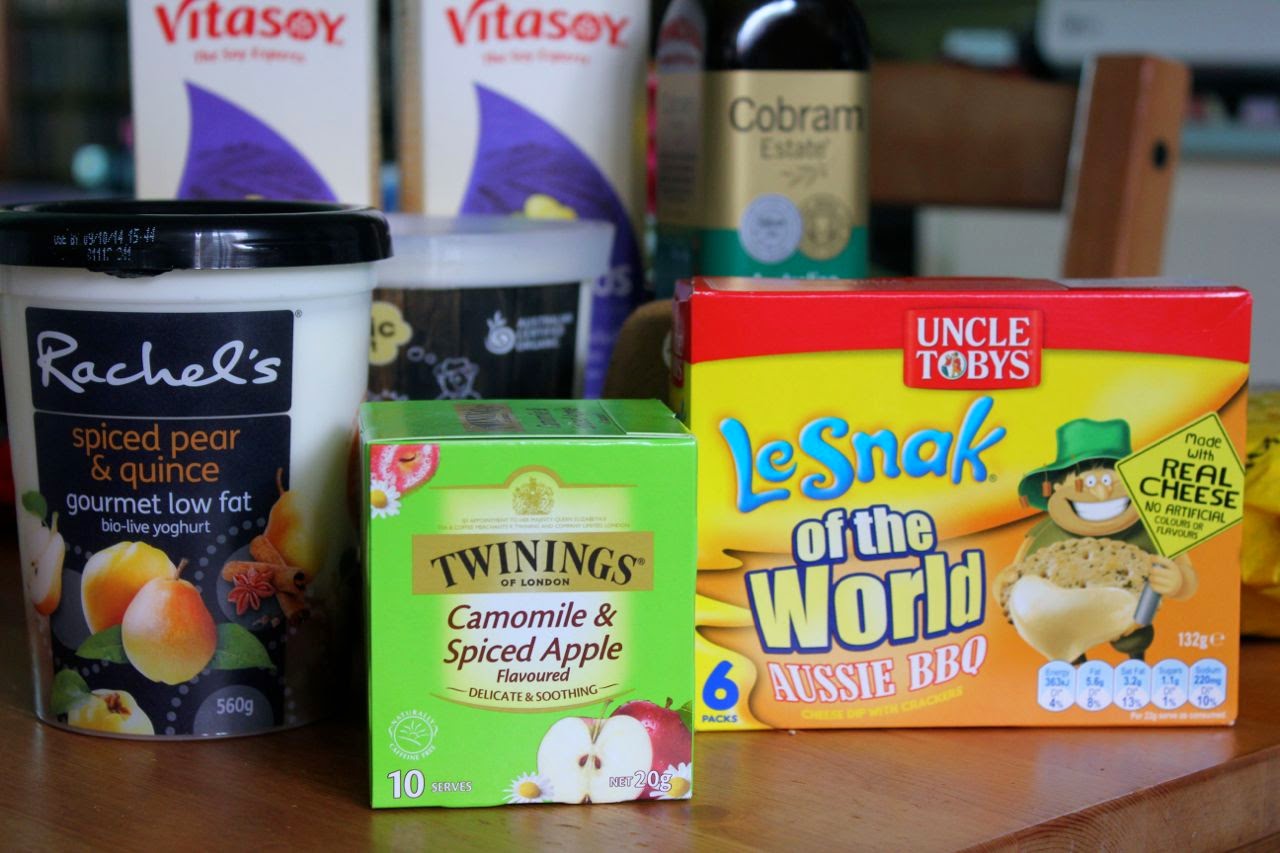 With out car stolen I found myself mostly doing small amounts of shopping on my bike.  Here is a sample of groceries.  I liked the spiced pear and quince yoghurt but not quite as much as our favourite 5:am vanilla yoghurt.  I tried the camomile and spice apple tea because the honey and camomile tea I have been loving was out of stock.  Cinnamon in tea just is not my thing.  Despite me finding a chai tea that I enjoyed.  We often have some Le Snak in the cupboard for convenient snacks to take out (I know the packaging is horrendous).  The Aussie BBQ cheese and bikkies were really good. We regularly go to Zaatar for zaatar pizza and zoccacia.  In third term Sylvia had a student led conference (after two terms of parent teacher nights).  Afterwards we had dinner at Zaatar.  It was late so we took home some baklava.  Can you think of a dessert more likely to produce sticky fingers in a 5 year old!  It was delicious. 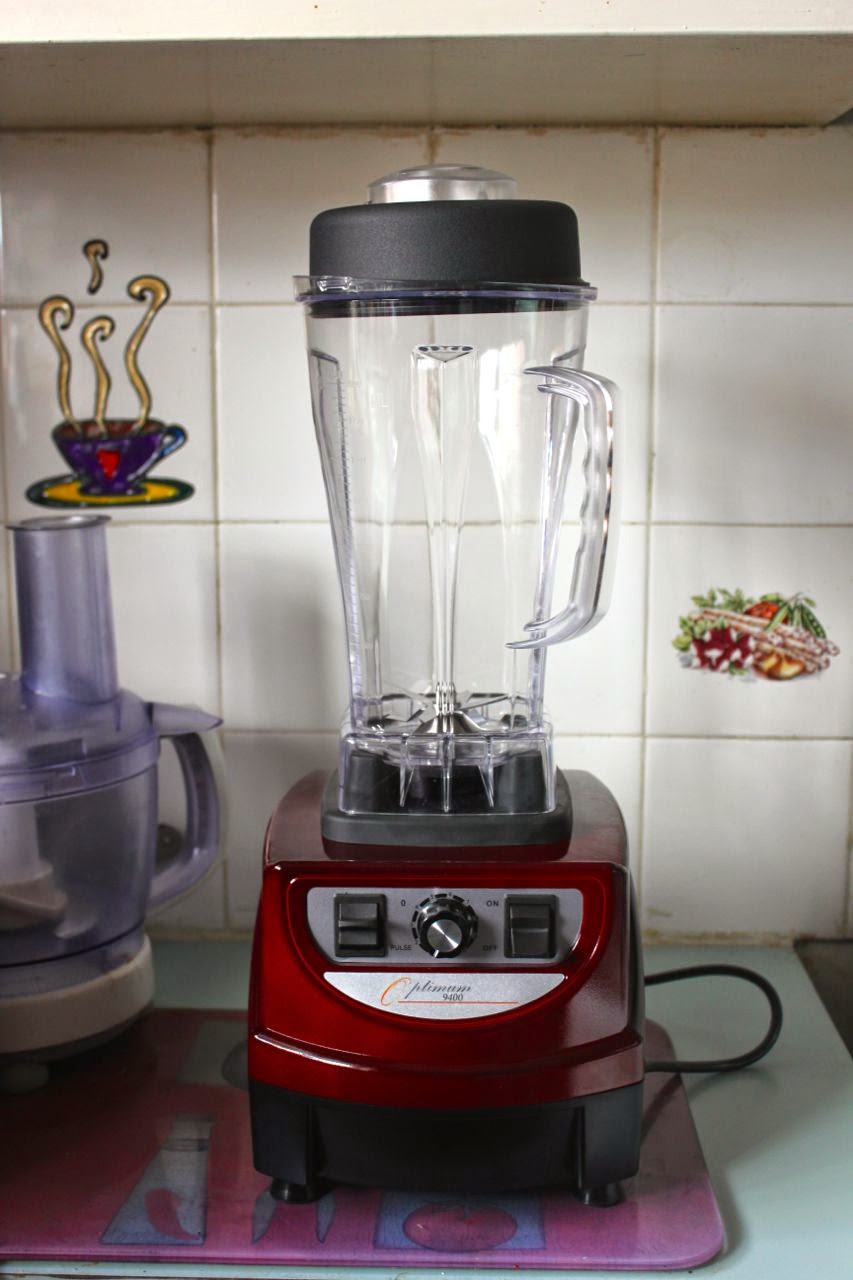 As I mentioned I have a new blender.  It is a Froothie Optimum 9400 that I bought with my own money.  I am enjoying using it for smoothies, nut butters and dips but I am looking forward to finding time to use it for cashew cream, vegan cheese sauces and maybe even trying some vegan milks.  Then perhaps I will write about it n more detail. 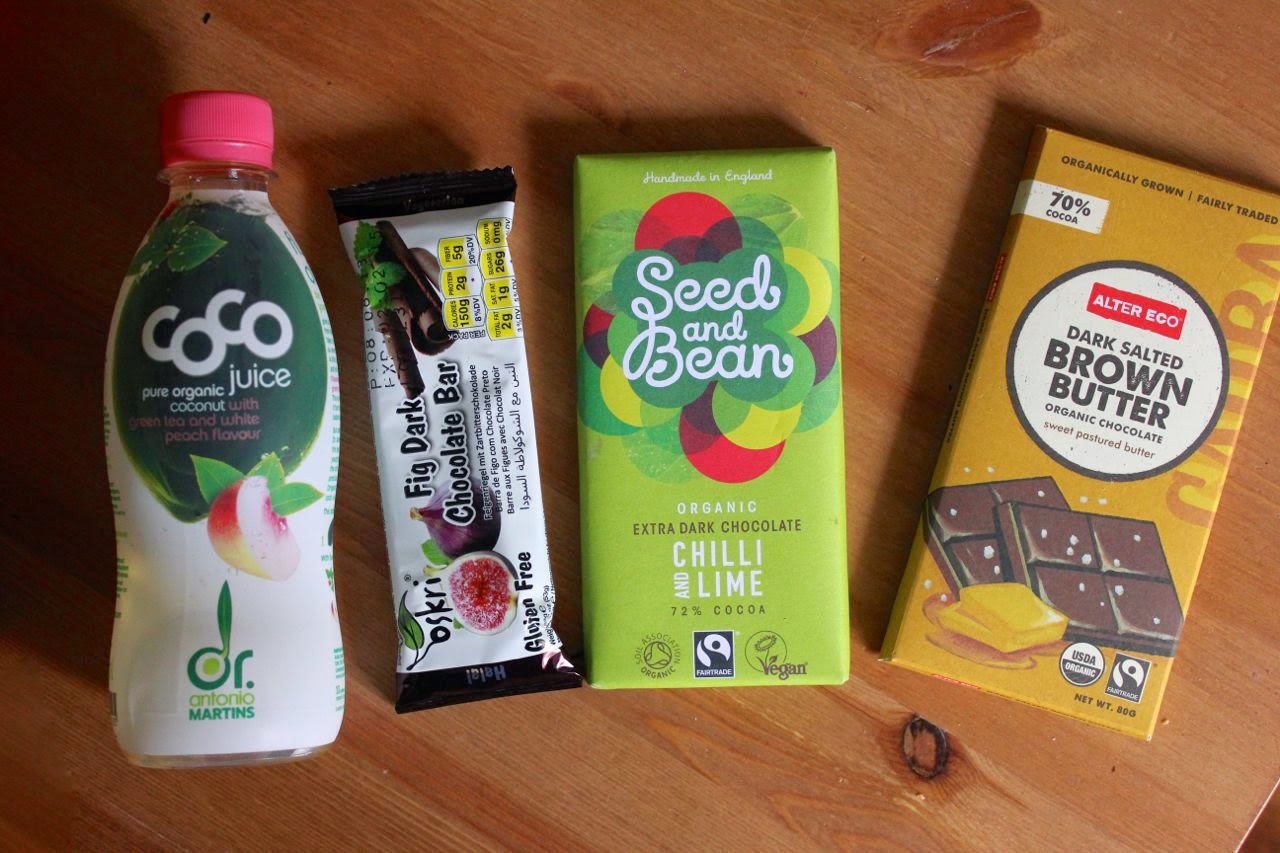 I visited Aunt Maggies in Brunswick for a quick snack.  She has an amazing array of chocolate.  The Oskri fig and dark chocolate bar was delicious and intense.  I wish I could say such nice things about the coconut juice with green tea and white peach flavour.  The nicest way I could put it is: no wonder it was on sale.  The chocolate bars were presents and received very high praise.  I had a taste of the Alter Eco dark salted brown butter chocolate and it was wonderful. 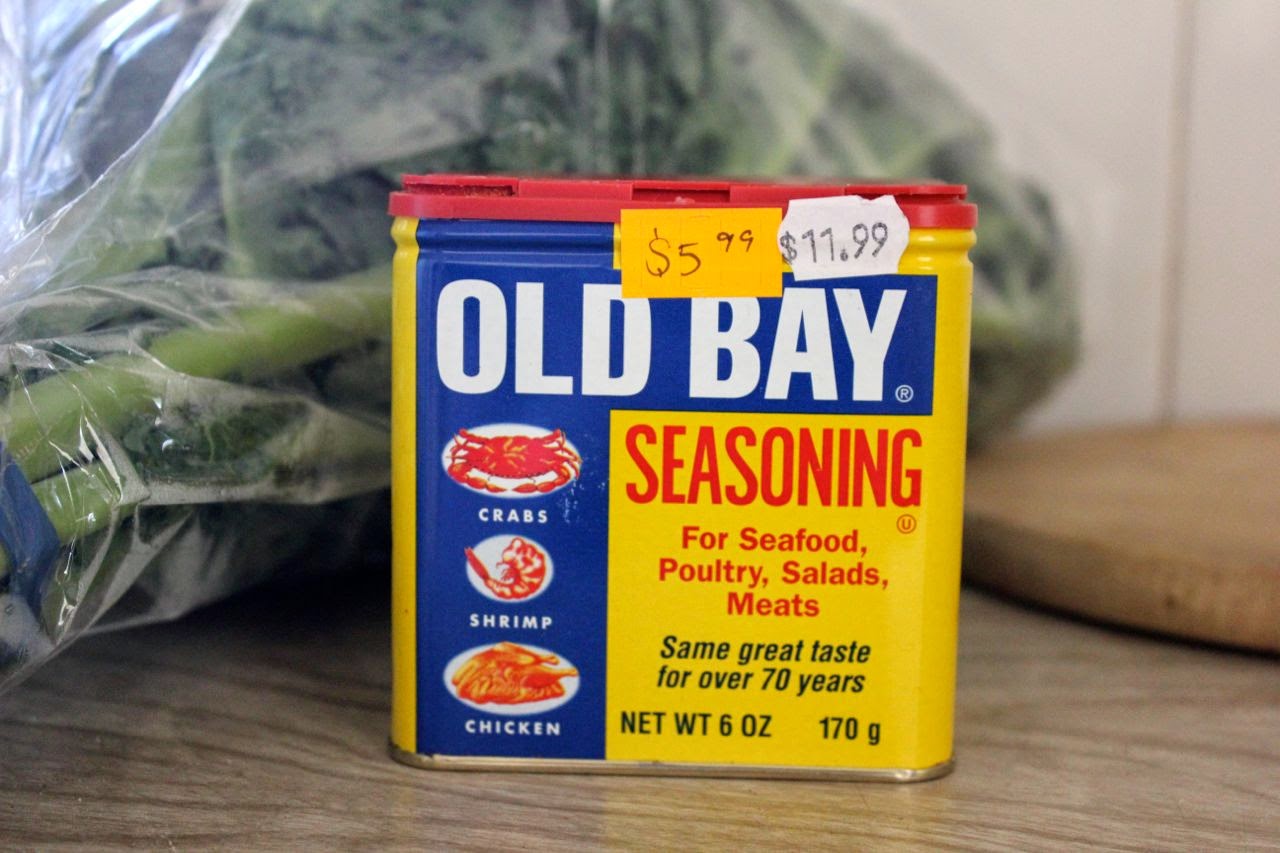 I am yet to write about my trip to Adelaide.  Here is a little sneak preview.  I was interested to see a tin of Old Bay Seasoning.  It is a great seasoning mix with some heat in it.  It worked well with chipotle chillis in fajita vegies.  I have used it in a couple of dishes but there hasn't been much cooking in my kitchen lately. 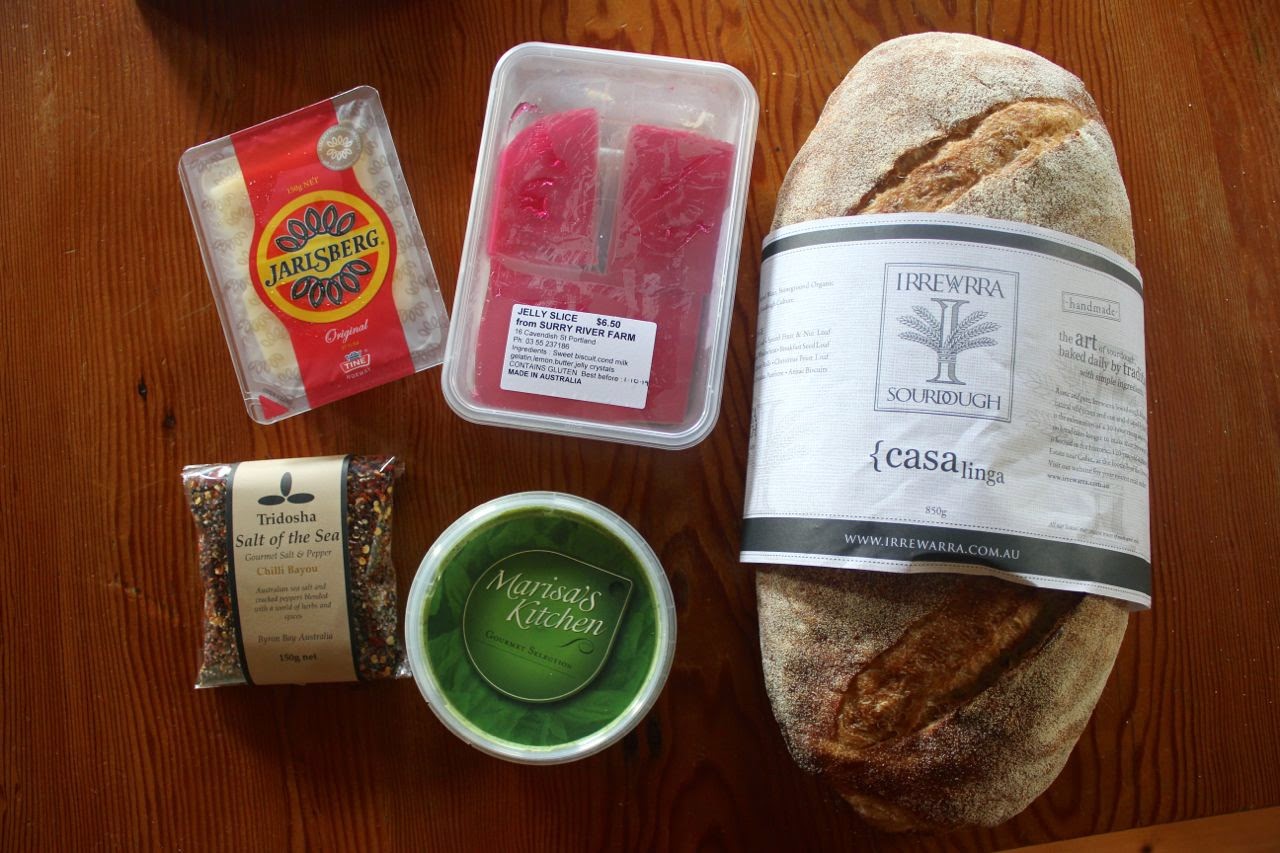 This is some of the food I bought in our recent trip to Port Fairy.  We bought jelly slice at the market, swiss cheese at the supermarket and the casalinga sourdough bread, spinach and macadamia dip and chilli bayou seasoning mix at the Darriwill Farm Shop.  A posh food shop and good bread really doth maketh the holiday!  More about Port Fairy soon. 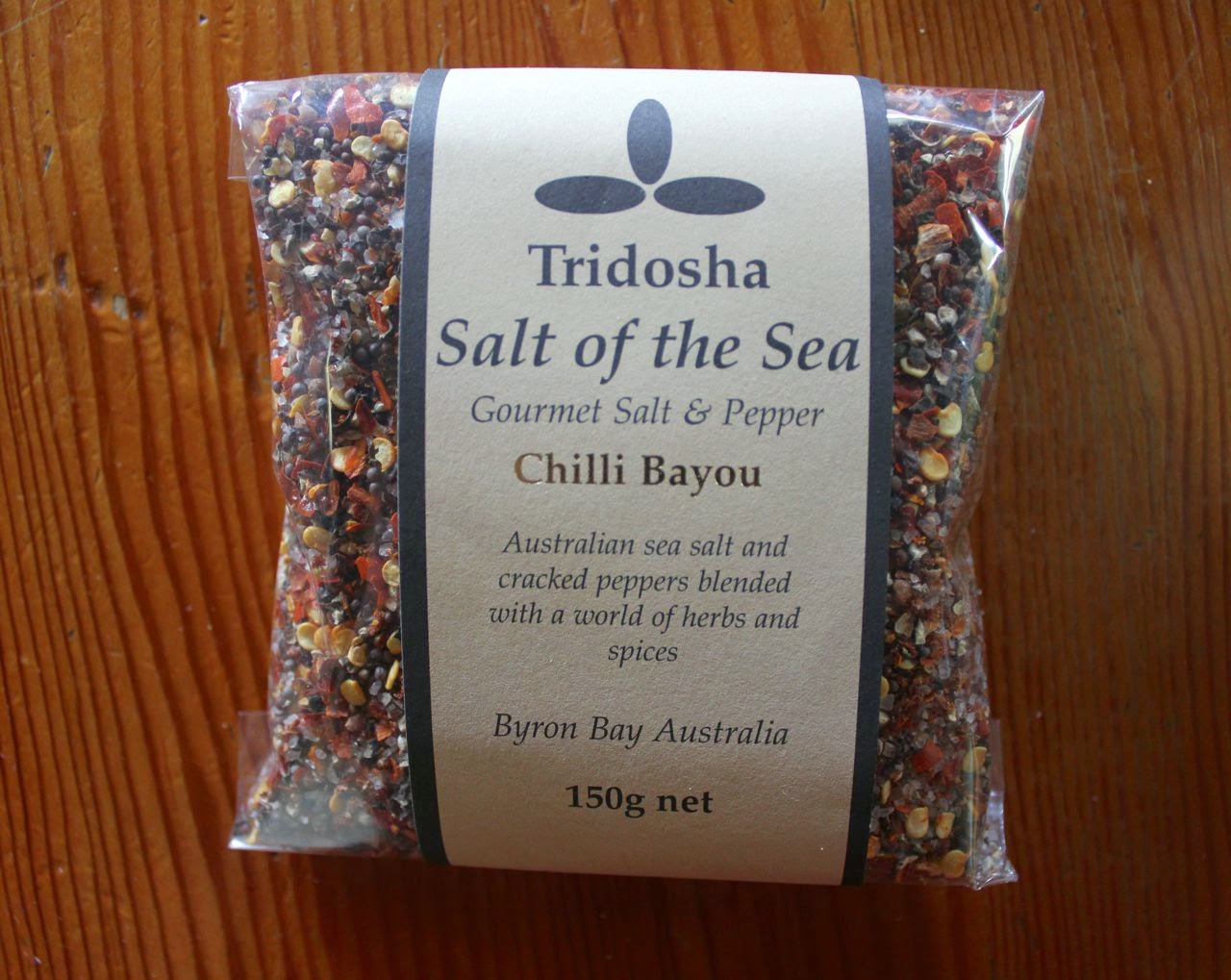 Meanwhile here is a close up of the Salt of the Sea chilli bayou seasoning mixture.  It hasn't been opened yet because, as I mentioned above, I haven't done much cooking lately.  Not only did we not cook on holidays but my mum has kindly gifted us some lasagna, curry and cake to tide us over since we got home.  I am looking forward to using this spice mixture.  It appealed because it seems more black pepper and mustard seeds than chilli.  I am sure E will enjoy its heat! 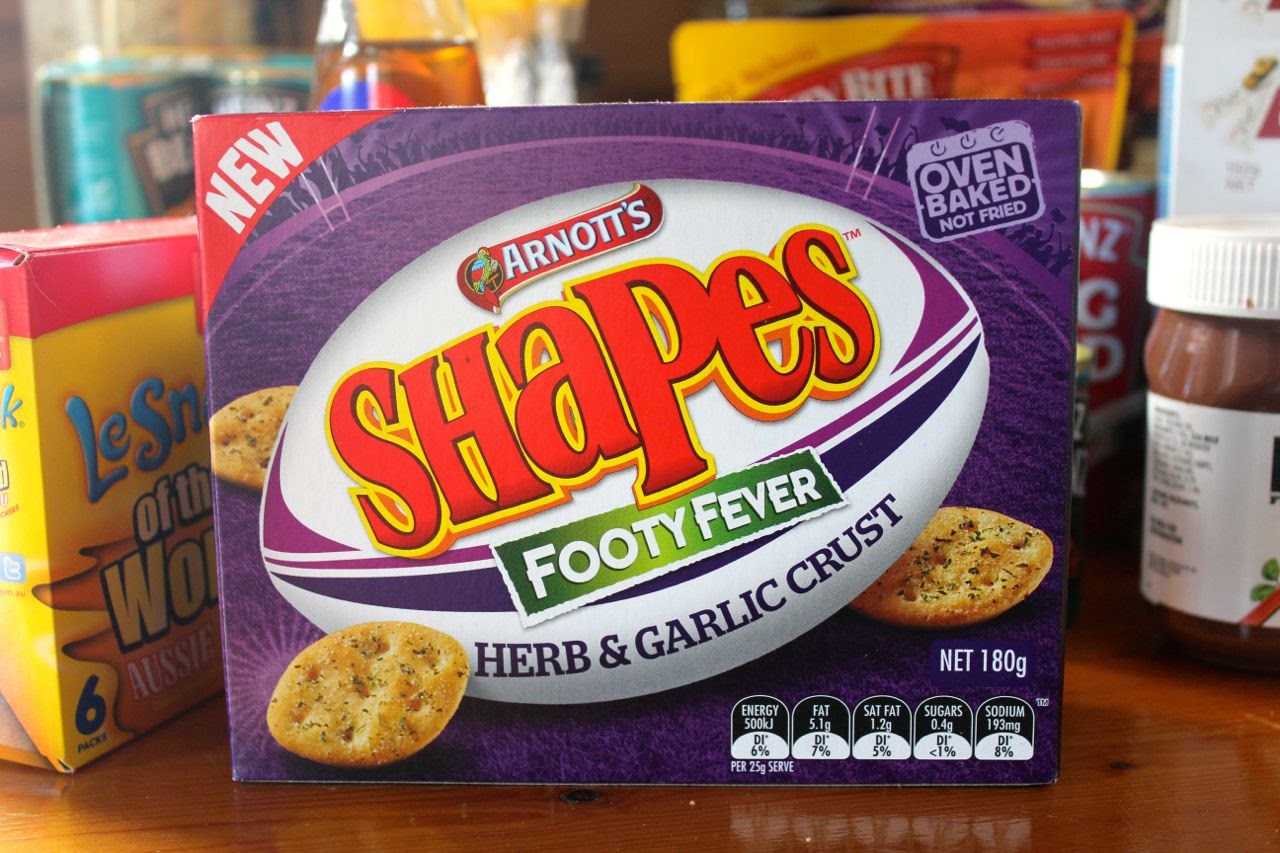 We were in Port Fairy during the AFL Grand Final and I saw nothing of the football all weekend except some suggestions for face painting in team colours.  My little nod to the footy was this packet of Arnott's Footy Fever shapes.  Sylvia liked them because they were little.  I loved them but goodness they were covered in moreish seasoning.  They were very good dipped in the spinach and macadamia dip. 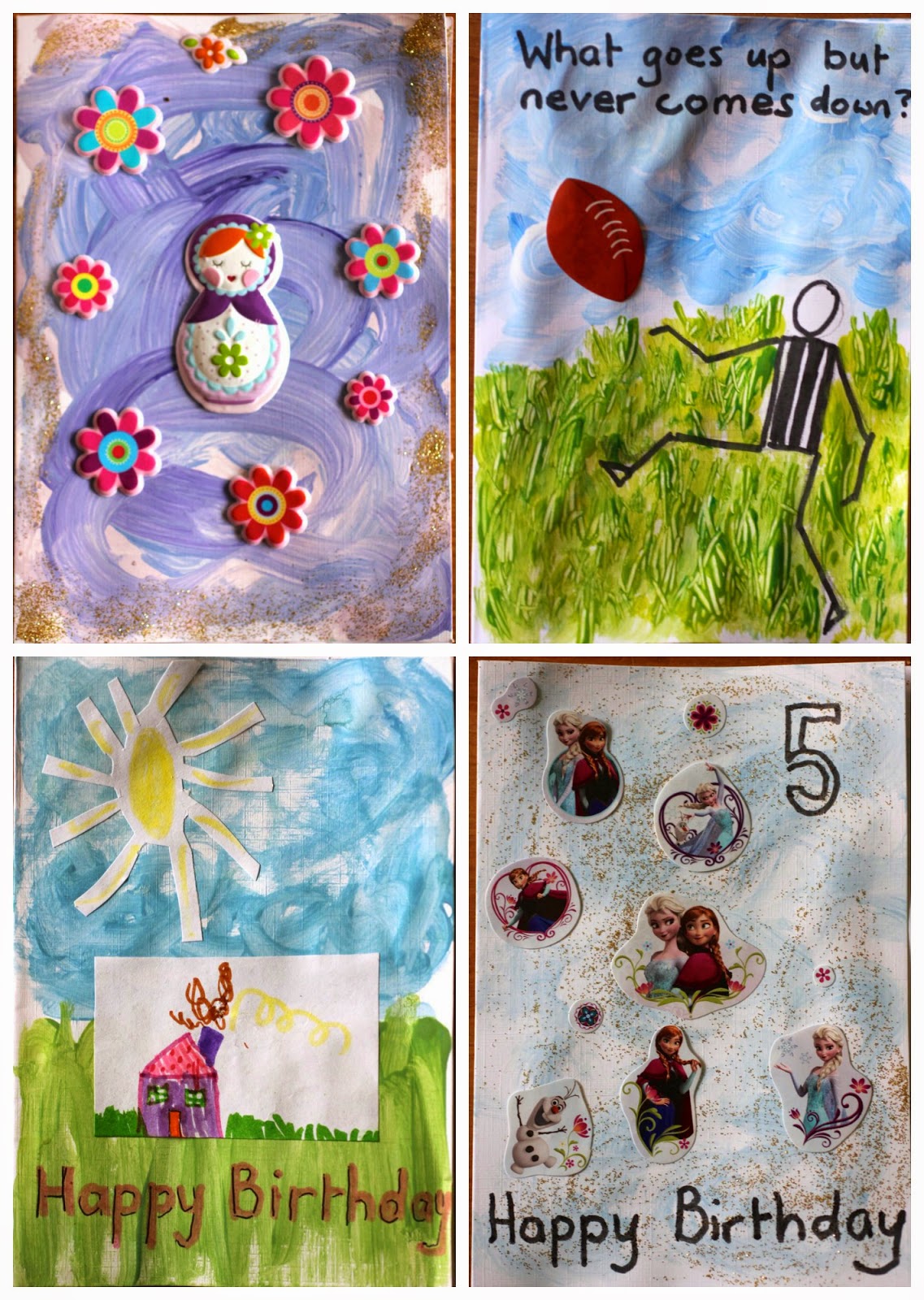 And finally, a bit of craft.  We have had a lot of birthdays recently.  I didn't make as many birthday cards as I intended.  However here are a few of the ones that Sylvia and I made.  Note to self: glitter glue and stickers seem a perfect match but are best kept separate on the card. 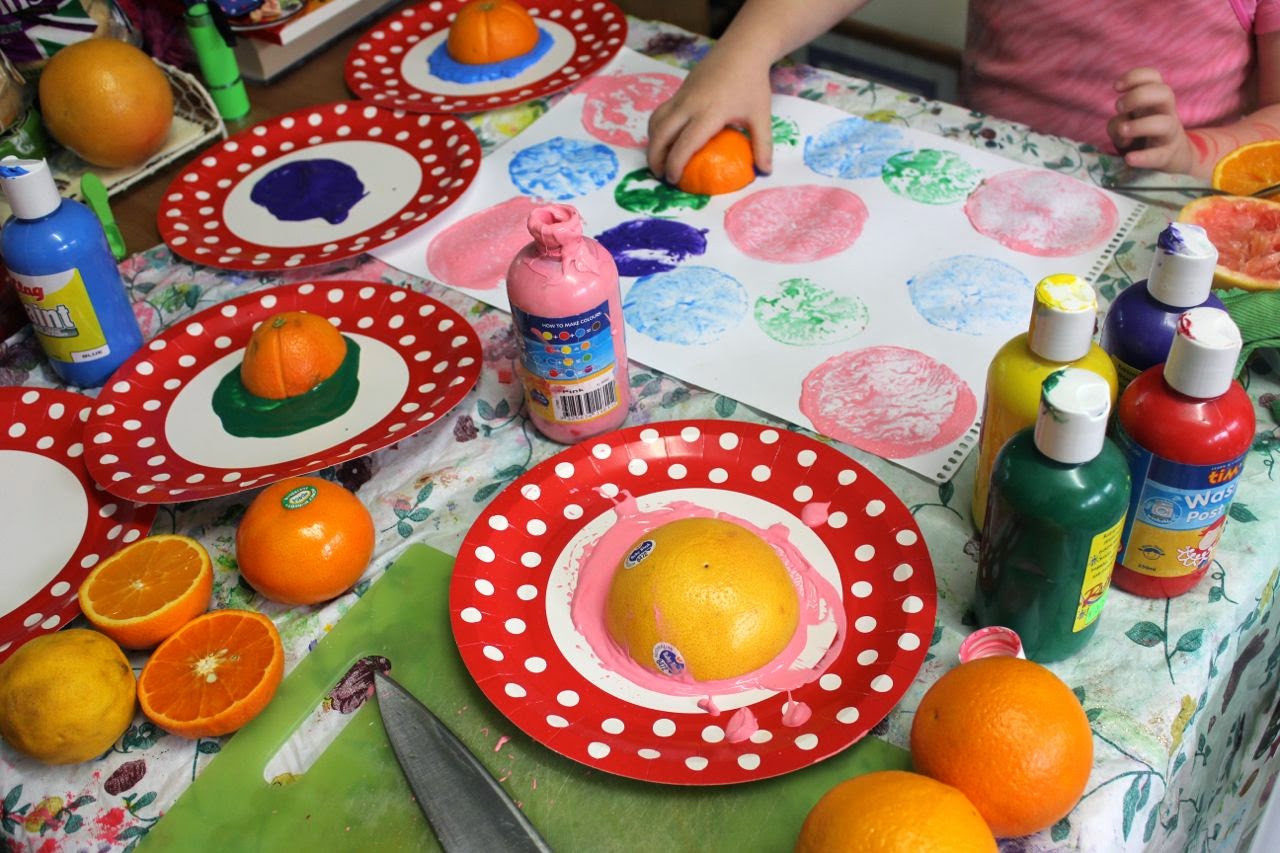 Since Sylvia has started school this year we have done a lot less craft.  Perhaps that is why I embarked on this foolhardy school holiday activity inspired by Mr Maker.  When he dipped oranges and other citrus fruit in plates of paint it looked brilliant.  There was no suggestion that a lot of paint got wasted this way or that the fruit became all slippery in little paint covered hands or that a little girl might decide it was easier to use her fingers to make the circles.  And we really should have put on our art smock aprons!  Never mind, it was lots of fun.  And I found out that Sylvia likes grapefruit!

I am sending this post to Celia at Fig Jam and Lime Cordial for her In My Kitchen event.  Head over to join in and/or check out what is happening in other bloggers' kitchens.
Posted by Johanna GGG at 20:47