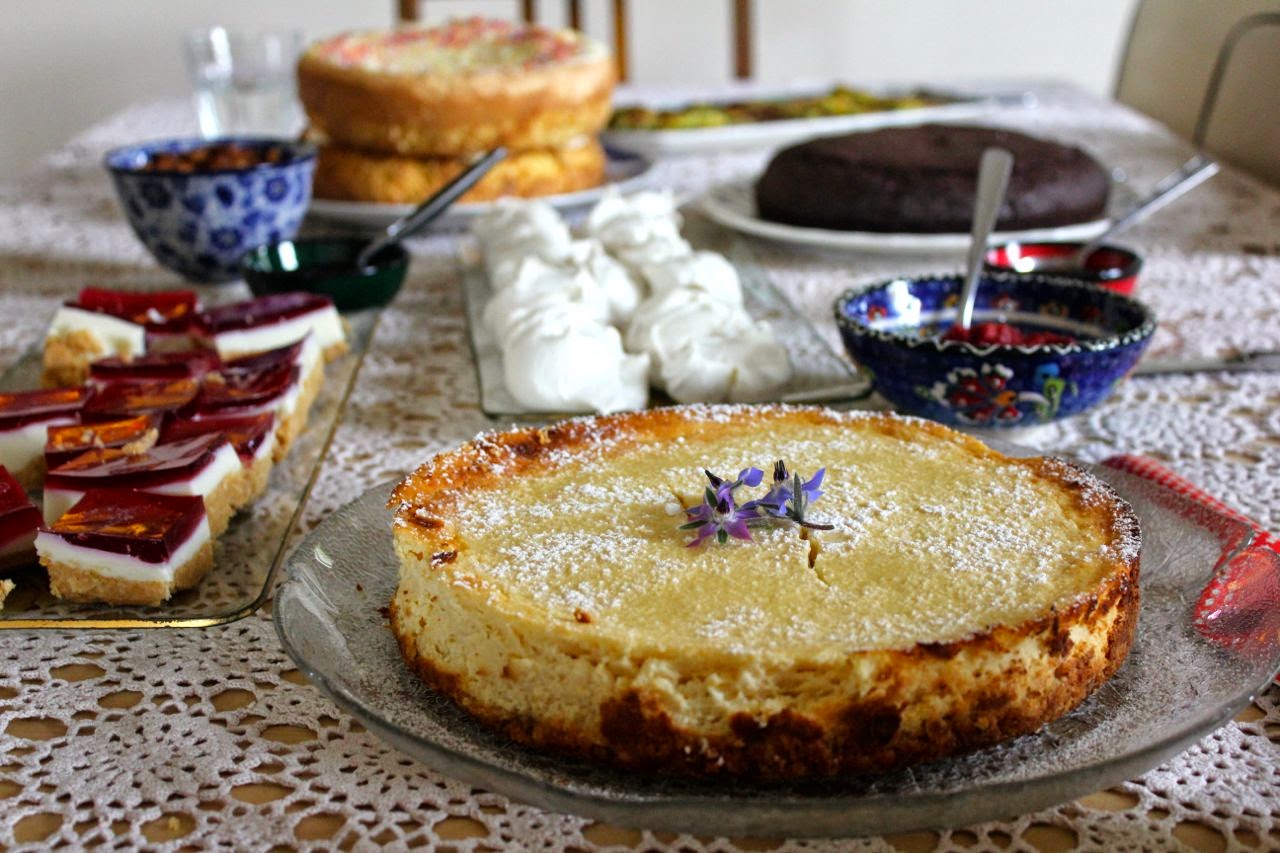 Sometimes a recipe defines a weekend.  I have make great sourdough flatbread wraps, stewed rhubarb, experimented with frying the filling from these sausage rolls (not a success).  Yet it is the baked lemon cheesecake that took most of my attention this weekend.  I haven't made a proper cheesecake for years.  Which meant I worried at every step but it was all worth the effort.  Every mouthful! 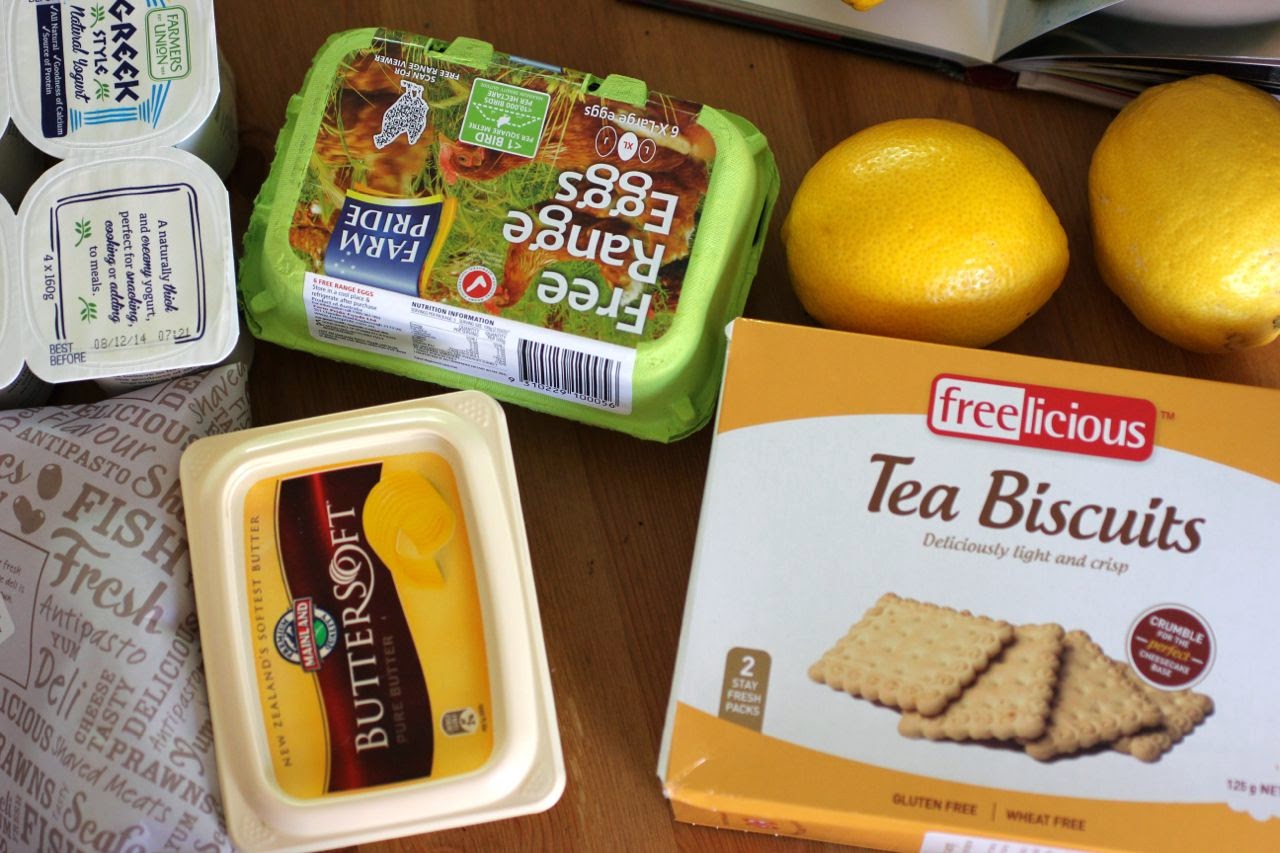 The cheesecake was made for a birthday tea for my celiac sister.  I found a recipe for a baked lemon cheesecake. When I came home from the farmers market with lemons, the recipe wasn't quite what I had in my mind.  I searched and nothing else fitted the bill.  So I returned to my original recipe which had to be close enough for jazz.  I used mostly gluten free biscuits for the base.  I stuck to the Freelicious brand which I know.  I bought eggs, which I haven't had in my kitchen for about a month. 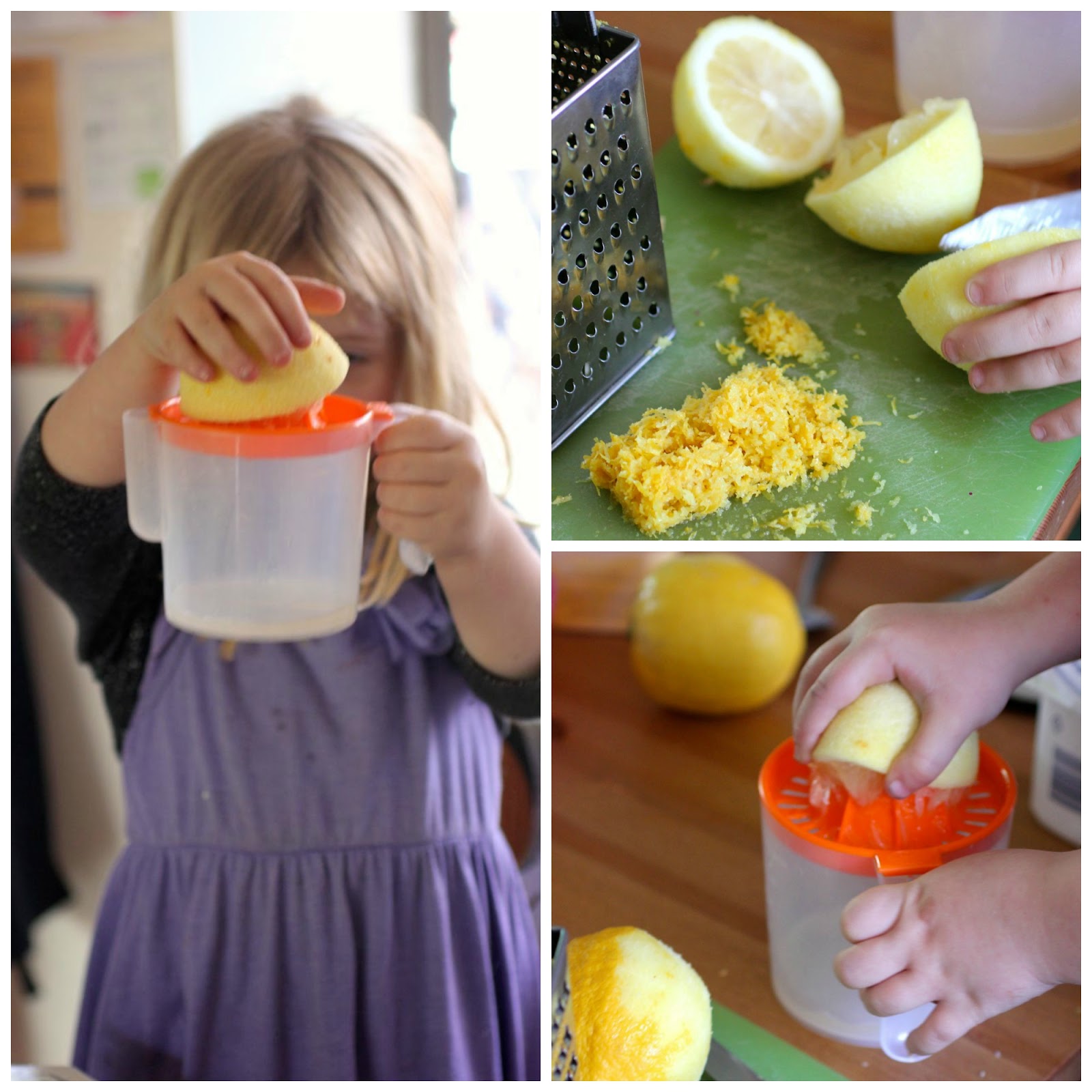 As soon as I started making the cheesecake, Sylvia wanted to help.  She juiced and measured and drove the food processor.  She even read a bit of the ingredients list for me.  She also decided to weigh her hand and wave the kitchen scales around.  The display was giving very odd information so I estimated the ricotta and yoghurt weights.  Then I thought to take out the battery and put it back in again.  That fixed the scales.

It didn't stop my cheesecake inexplicably sweating.  It was dry when I turned off the oven.  I cooled it in the oven with the door ajar.  Then it started to sweat.  I mopped its brow with a kitchen towel once or twice.  I am not sure if this helped.  It had dried in patches after overnight in the fridge.  Any advice on why this happened is welcome. 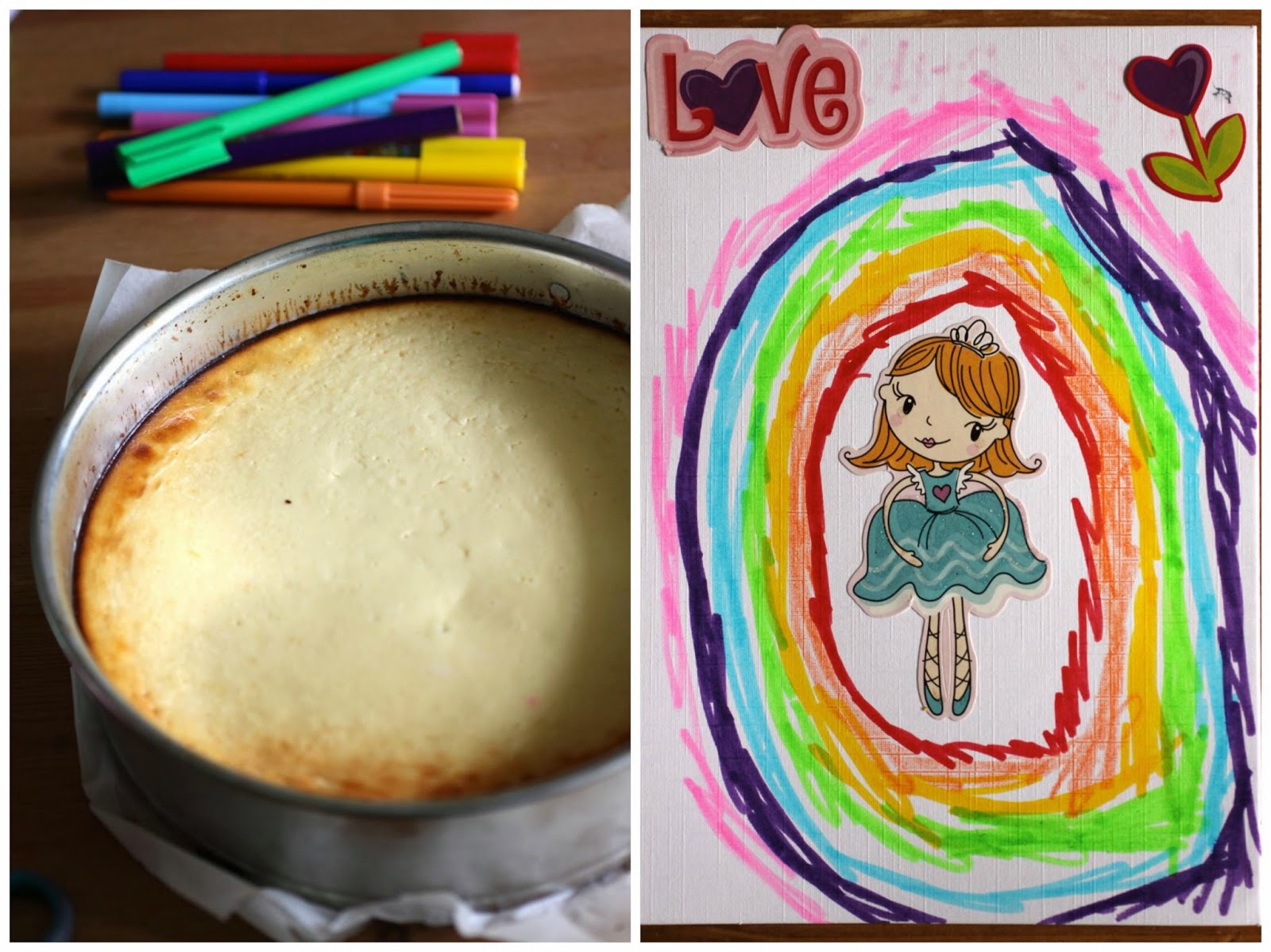 In the morning, Sylvia worked on a birthday card and I checked the cheesecake a few more times to see if it was still sweating.  Finally I put the cheesecake in the boot of the car and drove to my parents' house. 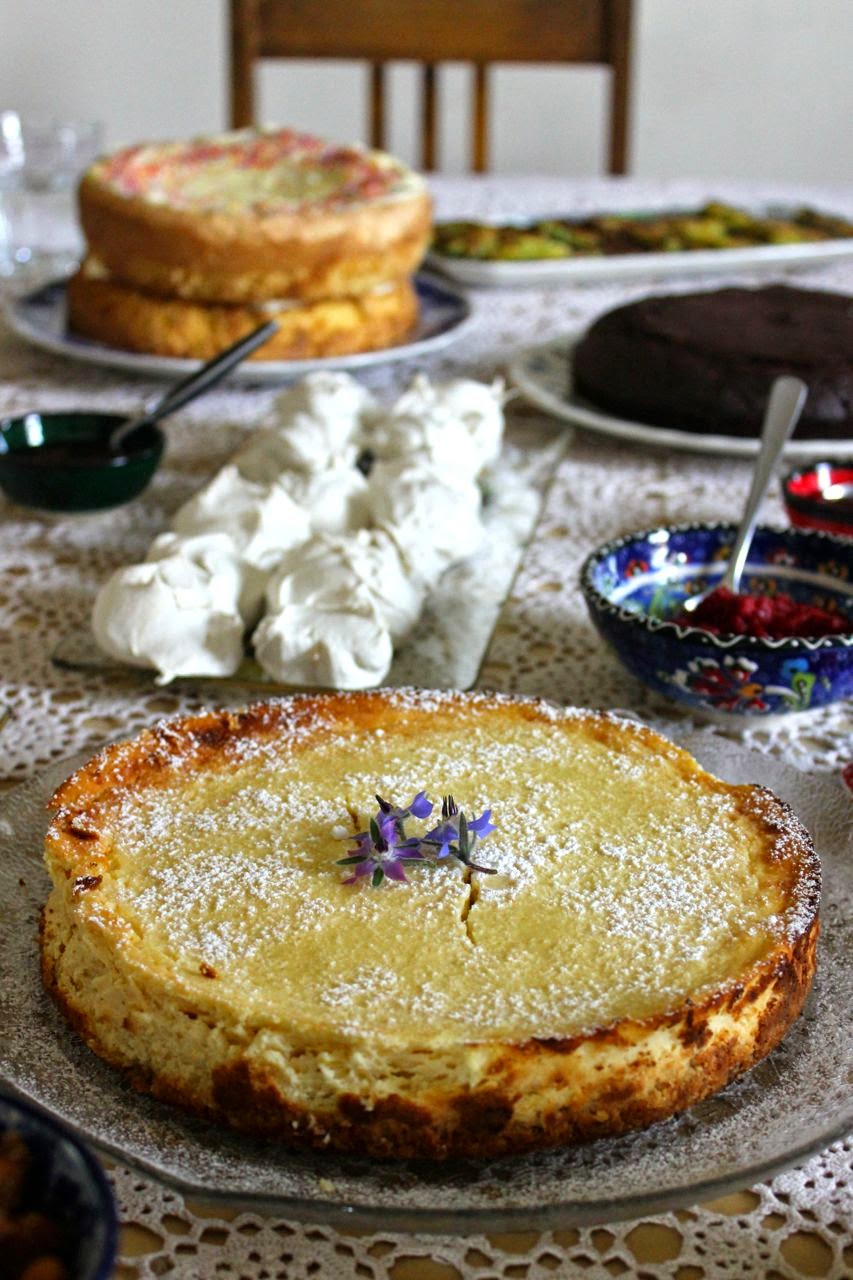 My mum had been very busy preparing a gluten free afternoon tea for Susie.  She made an impressive sponge cake, a childhood favourite jelly slice, meringues, zucchini fritters, spiced chickpeas, chocolate cake and scones.  She loves to experiment and made a Jamie Oliver gluten free scone recipe which was amazing.  The recipe only made a small amount of scones so mum also made some regular scones. 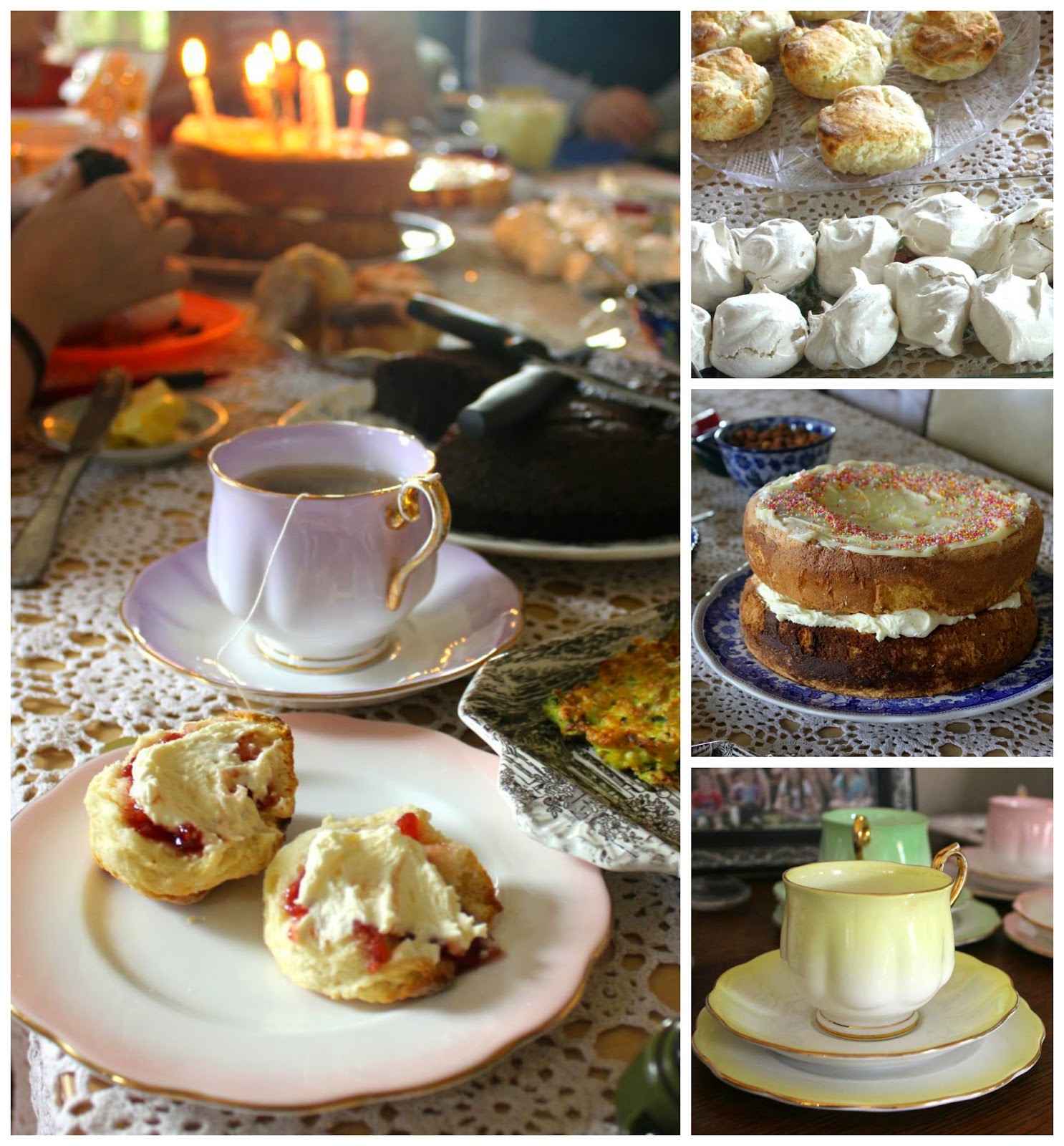 As you can imagine, we ate very well.  The cheesecake was very good after all my worry about it.  (I sprinkled it with icing sugar and mum decorated it with some borage flowers from her garden.)  I was relieved it was the sort of cheesecake I had envisaged.  Dense and yet light and fluffy.  It had a distinct lemony tang and a little texture from the zest.  A small slice was quite enough.

I enjoyed chatting to my niece Quin who knows every Dr Who episode but had never heard of Australian Prime Minister Gough Whitlam.  We also talked about books (lots of classics as well as How to Live Forever and Molly Moon) Sylvia played cafes with her cousins and then they disappeared down to the park. 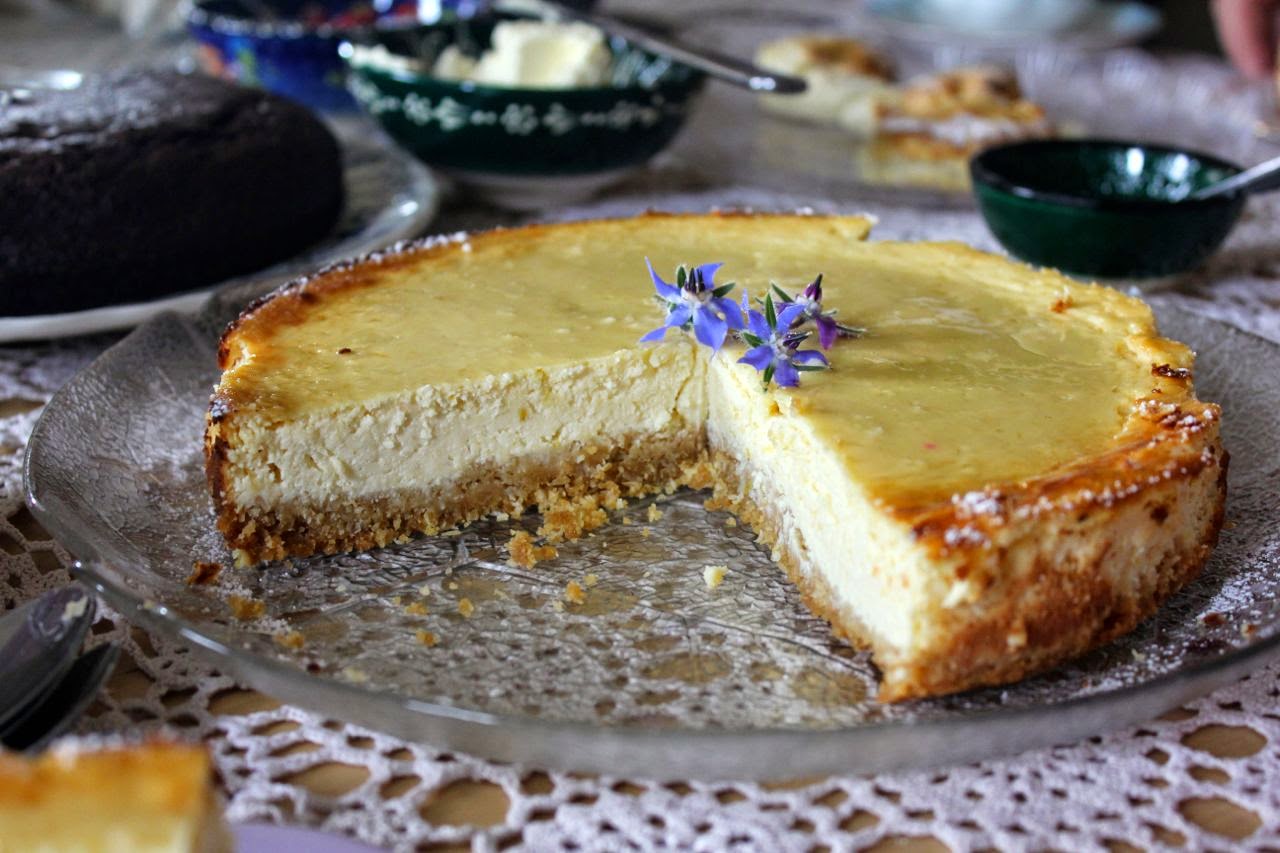 I am pleased to report that the birthday girl enjoyed the cheesecake.  When I took some leftovers home to E, he asked if it was possible to make a lighter version of the cheesecake.  I sighed and reflected that this was one reason I don't make cheesecake so often.  I do love cheesecake but it is rich and takes me out of my comfort zone.  Yet this is a reminder that I really should bake cheesecake more often.

I am sharing this with the Shop Local event at Elizabeth's Kitchen Diary because I bought lemons for this cheesecake at the local farmers market.  (I wish they had come from our lemon tree.  It has quite a few lemons growing but none are ripe enough to pick yet!)

Grease a 20cm springform tin* and lay some baking paper across the base before fitting into the side of the tin.

Use a food processor to finely grind biscuits.  Add in coconut and almonds. Process briefly until mixed.  Melt butter in a mixing bowl.  Tip in biscuit mixture and mix.  The mixture should clump together if pinched between fingers.  Press into the base of the prepared springform tin.  Chill in fridge while you prepare filling.

Place all filling ingredients in food processor and blend until combined.  My mixture was quite runny.  Pour on top of biscuit base.

Bake for 40-60 minutes or until filling is set and golden on top. Turn off oven.  Leave to cool in oven with the door adjar.  Chill in the fridge overnight.  Leave out of the fridge for a few hours before serving.  Transfer to a serving plate and sprinkle with icing sugar.

NOTES:
- My springform tin is 22cm so I used it but a 20cm tin would give the cheesecake a bit more height if you have one.
- The recipe called for 3 lemons but mine seemed large so I only used two which seemed to be enough.
- I bought the firm ricotta from the deli rather than a tub off the fridge shelves.