Traditionally I give myself an amnesty in January to compile a few catch up posts of yummy food that has sadly lingered in my blog backlog.  So before the month finishes, here are some places I have eaten in last year.  Some I just haven't found time to return and give them the attention they deserve in a write up.  Some are ones I have already posted about.  A few I probably wont revisit but wish to make a few notes on my visit.  Here goes:

I had a quiet moment last year to eat lunch at Code Black in Brunswick (just north of Barkly Square).  Loved my broccoli, almond and chia fritters with grilled corn salsa, coriander and avocado.  It was delicious with lots of vegies.  I even coped quite well with the coriander.  I would love to go back but have a few others places in Brunswick on my hit list at the moment.

I was quite excited to go to The Knife Shop on Wellington Street, Collingwood.  The thought of having my knives sharpened was far more enticing than the food.  (I did have one wasted journey when I found I would have to leaves my knives over the weekend because my timing for the knife sharpening was wrong.)  And I loved the retro design!

The jury is still out on the food.  I had a wonderful warm raspberry and white chocolate muffin warm when I dropped my knives off.  When I picked up my knives I had a berry cake that had been in the fridge too long.

The savoury menu did not inspire me at the Knife Shop but I think the attraction of Cibi (Keele St, Collingwood) was really that I could buy some sushi for Sylvia.  Alas no sushi was to be had.  Instead I ordered a tofu patty and rice quinoa with daikon and seaweed salad.  It was unusual but so good.  Sylvia just picked at it.  I hope to get back some day and write more about the place.  It is just so peaceful and delicious.

Some places are just so good but so casual that I never think to really take proper photos and notes.  Take the Melbourne Kebab Station (just near the entry to Coles on Sydney Road in Coburg).  If I want Turkish bread in Coburg this is often our go-to place.  Recently I have discovered they have an amazing plate of food - falafel, hummus, babaganoush, salad, rice, Turkish bread.  It is so filling it really needs two people to do it justice.  The babaganoush is amazingly silky.  The bread is fresh and fluffy.  The place is always busy.  And it is no wonder!

In 2012 my brother went to the Beachcomber in St Kilda for a breakfast brunch.  He repeated this last year.  I enjoyed my pancakes with maple syrup.  They were a bit stingy with the maple syrup but we requested more so we could drown the pancakes!  I loved my juice.  I think it was carrot, beetroot, parsley, apple.  It make my nieces turn up their nose but it was gorgeous.

The biggest disappointment in this post was my meal at Soul Food Cafe in Fitzroy.  I loved their former poky incarnation with a huge selection in the salad.  I had a particular fondness for the wheatberry salad.  Sigh!  Now it is just another large light filled cafe with modern pine furniture and shelves of bottles behind the counter.  I guess some people like it.

I went there months ago after the Fitzory Market wtih E, Sylvia and our friend Heather.  We shared aranci balls, edamame, falafel and chips.  It was nice.  Not brilliant.  I missed the salad bar.

Sylvia loves ice cream.  I've never really found the need to seek out ice cream parlours near us.  When I promised her an ice cream, I was hard-pressed to think of a local place.  So we drove down to Lygon St, Brunswick to the Gelo Bar.  It had an amazing selection of flavours on the menu.  I really liked that they had small cones with sprinkles.  Perfect for small girls.  Sylvia had chocolate.  I had butterscotch.  Since then I have found a place we pass all the time that sells ice creams.  We will get there one day.

Every now and again we head to Ikea when our house is in need of improvement.  Sometimes we stop at the cake.  I wrote about Ikea's cafe (Richmond) a few years back.  I think I prefer browsing their groceries.  Far more interesting.  However last year, while constantly visiting in hope of a lamp being in stock, we shared what I think was called Almond Cake, chocolate and butterscotch.  It was too creamy for my liking.  Shame.  It looked interesting.

We regularly go to Zaatar on Sydney Road, Coburg for their amazing $1 zaatar pizzas.  I was quite pleased to see them serving soup and bread rolls in winter.  The vegie soup was nice, abeit a bit watery for me, and the bread was soft and pleasing.  It seemed expensive compared to the zaatar pizzas but there are very few things that don't seem pricey compared to those bargains!

Finding a decent feed at a food hall is always a challenge.  Lately I have been a fan of Salsas.  I went there late last year when I went to the Herald Sun Aria with my Dad and various family members.  E and I had dinner at Salsas in Southgate Food Hall before the show.  I quite enjoyed my Mucho Veggie Bowl.  It was full of black beans, coriander and lime rice, onion and capsicum, broccoli and zucchini, cheese and chipotle salsa.  I had it again before seeing Angelina Ballerina the Mousical.  It didn't hit the spot quite as well but was still better than many food hall offerings.

On the same night of the "Sun Aria" we had a post-show dessert at the Waterfront Southgate.  I thought it was a Belgian chocolate fondant with salted caramel sauce.  I misread the menu.  It was served with salted caramel ice cream but the flavours did not come through in the ice cream.  Ah well, I enjoyed the pudding with a peppermint tea.  I think my dad had the pannacotta.  We enjoyed mulling over the judging of the young opera singers as we ate our desserts overlooking the Yarra River.

Before Christmas we had a family yum cha at Man Bo in South Geelong (opposite Kardinia Park).  It has been there for years and I always thought it was called Man Bo Towers.  I am quite wary of yum cha because I am never sure if there will be many vegetarian options.  As it was, I had plenty of choice (and so did the celiacs).  I ordered a corn soup which was a mistake because it was so large.  By itself it would have been filling.  It was too much alongside the spring rolls, steamed buns, dumplings, salt and pepper fried tofu, fried noodles and broccoli.  We had ordered so much food that we took away some leftovers with us.  I'd return there for yum cha.

I have previously mentioned Cafe Sarabella in another catch up post.  Sadly I never had a chance to give it the justice it deserved.  It closed last year.  It was a great little Indian cafe in Victoria Street Mall.  I just wish I had gone there more.  Above is a Thali plate that I enjoyed on possibly my last visit.  Two vegie curries, dal, rice and pickle.  Excellent value (if I remember rightly) and delicious, albeit quite spicy for me.  Vale Cafe Sarabella. 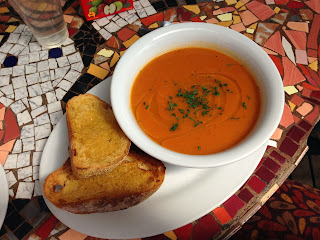 But let's not end on a sad note.  Other cafes are still doing great business in the inner north.  I first wrote about CERES cafe almost 5 years ago and am still enjoying visiting it.  It is a great place to eat while the kids play.  Here is a bowl of soup (carrot and tomato?) that I had there last spring.  I just love the colours in the photo.  [Update - remembered that recently at CERES I have discovered that there is no such thing as organic vegemite and hence they don't stock it, and I have had a nice banana muffin after seeing fairy acrobats!]

Now I just need to find some time to write up some cafes I have recently visited before they get neglected and relegated to another catch up post of good intentions.
Posted by Johanna GGG at 22:37