Panforte with a candy thermometer 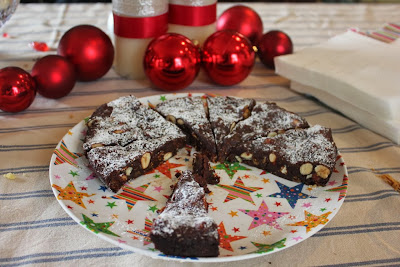 The last thing I want to read in a recipe in the evening on Christmas Eve is that a candy thermometer is required.  It was probably just as well that it was late and I was too tired to change plans.  At least Sylvia was finally asleep and I had prepared the nuts earlier.  Carols by Candlelight was on the television.  I made the panforte at a cracking pace before wrapping the presents. 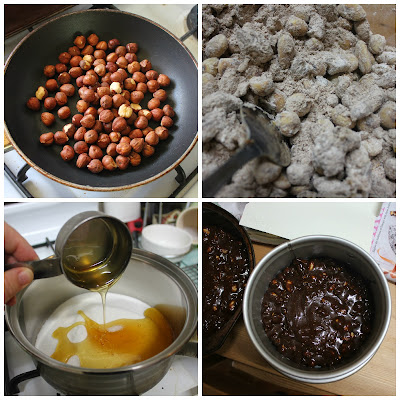 I have been making panforte for Christmas since 2009 with a recipe that uses fruit mince.  This year I found a new recipe in the magazine from the supermarket and decided to try it.  The recipe didn't call for fruit mince, which helped my resolution not to make fruit mince this year (having had last year's in the fridge all year). 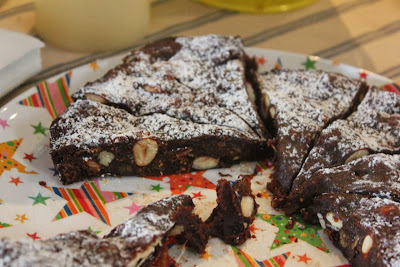 This panforte was different both in making it and eating it.  I found that I had to act quickly in making this one.  Such is the nature of working with candied honey and sugar.  Firstly though I took my time zesting the lemon and orange in front of the carols.

Once the sugar and honey were in the saucepan they were frothing with heat and the mercury was shooting up the candy thermometer and I had to break up chocolate and drop it into the hot liquid quickly.  However stirring the final mixture didn't need the oiled spoon the recipe suggested - that seemed like too much work. 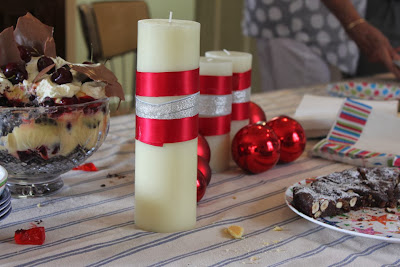 I took the panforte to my parents' house on Christmas Day.  We saved it for Boxing Day when my dad's family came to celebrate with us.  It didn't disappear as quickly as the caramel tart or look as impressive as my mum's black forest trifle but it was a good festive addition to the table.  My aunt, Jacqui, is a big fan of panforte so I always know it will be appreciated. 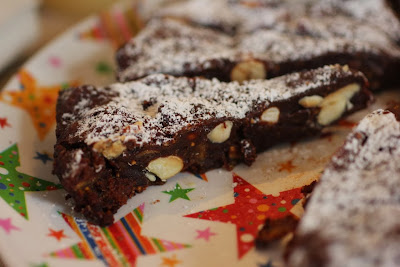 This year's panforte was far chewier than in previous years - more like candy while my regular panforte is more like fudge (or a really dense cake).  While I love a good Christmas fruitcake (especially with chocolate chunks), I think this dense chewy chocolate cake is just my sort of festive fruitcake.

Italian Panforte
Slightly adapted from Coles Magazine December 2013
* To roast almonds and hazelnuts, I gently dry fried on a non stick saucepan on low heat until they were smelling roasted and had slightly changed colour.  This took a while and the rubbing of the hazelnuts skins in a teatowel took a bit of vigour.

Heat sugar and honey in a small saucepan over medium heat until the sugar has melted.  Reduce heat to low and gently simmer without stirring about 5-6 min or until it registers 118 C on a candy thermometer.  (This happened rather quickly for me but perhaps that is because I wasn't sure when the sugar was melted as I could still see graininess.)

Remove from heat immediately and stir in chopped chocolate.  Quickly tip chocolate mixture into dry ingredients and stir until well combined (it will be quite a stiff mixture).

Press mixture into prepared tins.  Bake for 25 minutes.  (The recipe didn't say how to tell if it was cooked - I think the sheen should fade to a dullness but otherwise am not sure.  My little tin was slightly charred around the sides but was still good to eat.)  Cool in tin.  Keeps in airtight container for up to 4 weeks. Dust with icing sugar to serve. Cut into thin wedges with a sharp knife.

On the Stereo:
The Man in the Moon: 34 all time favourite songs, stories and rhymes