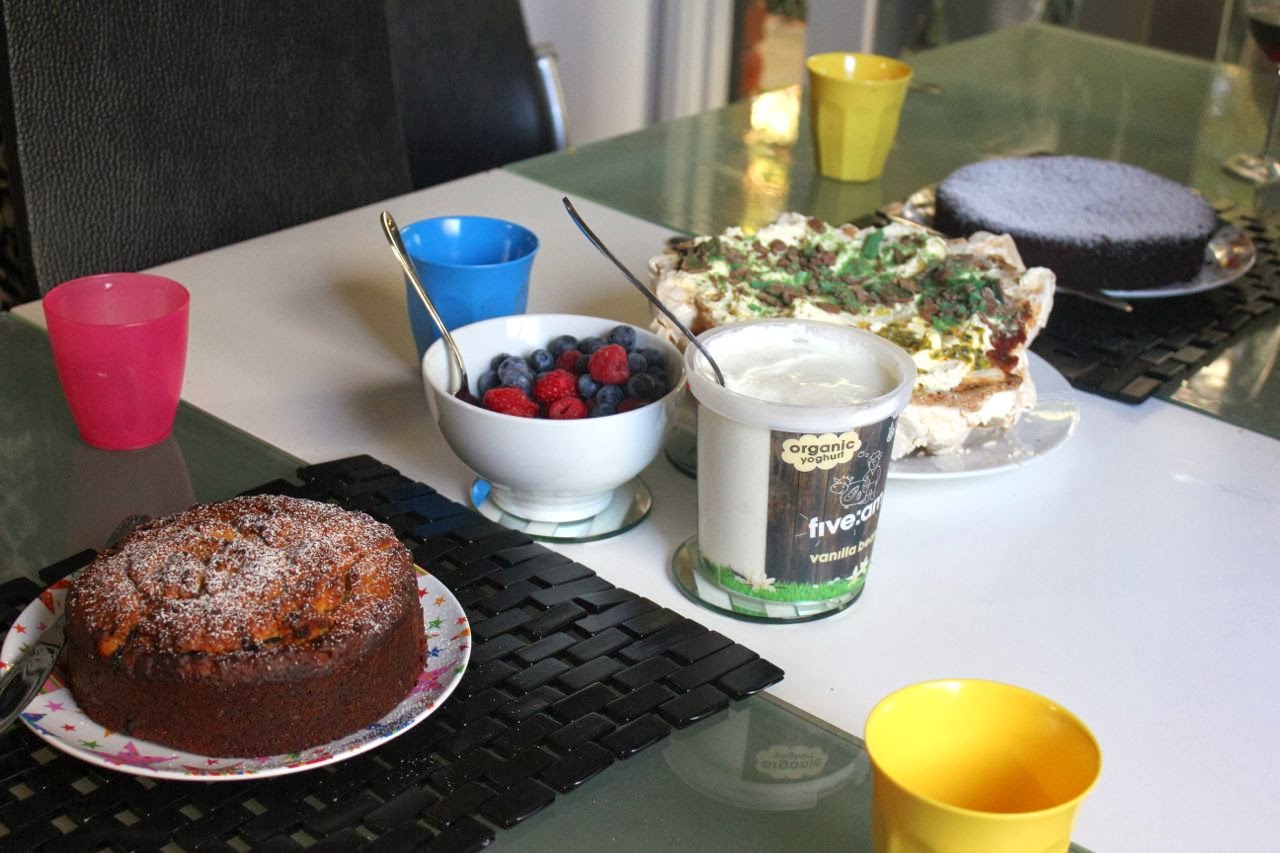 While we were on holiday in Ocean Grove recently we had a celebration lunch for my mum's birthday.  I volunteered to make a birthday cake.  My mum's only request was that everyone would eat it.

Making a cake for a lot of people seems like a great opportunity to experiment with all sorts of cakes.  Then I take all the preferences into account and my options narrow considerably.  Which is why I made two cakes.  The gluten free chocolate was a huge hit while the blueberry lime poppy seed cake was a bit dry and not so popular. 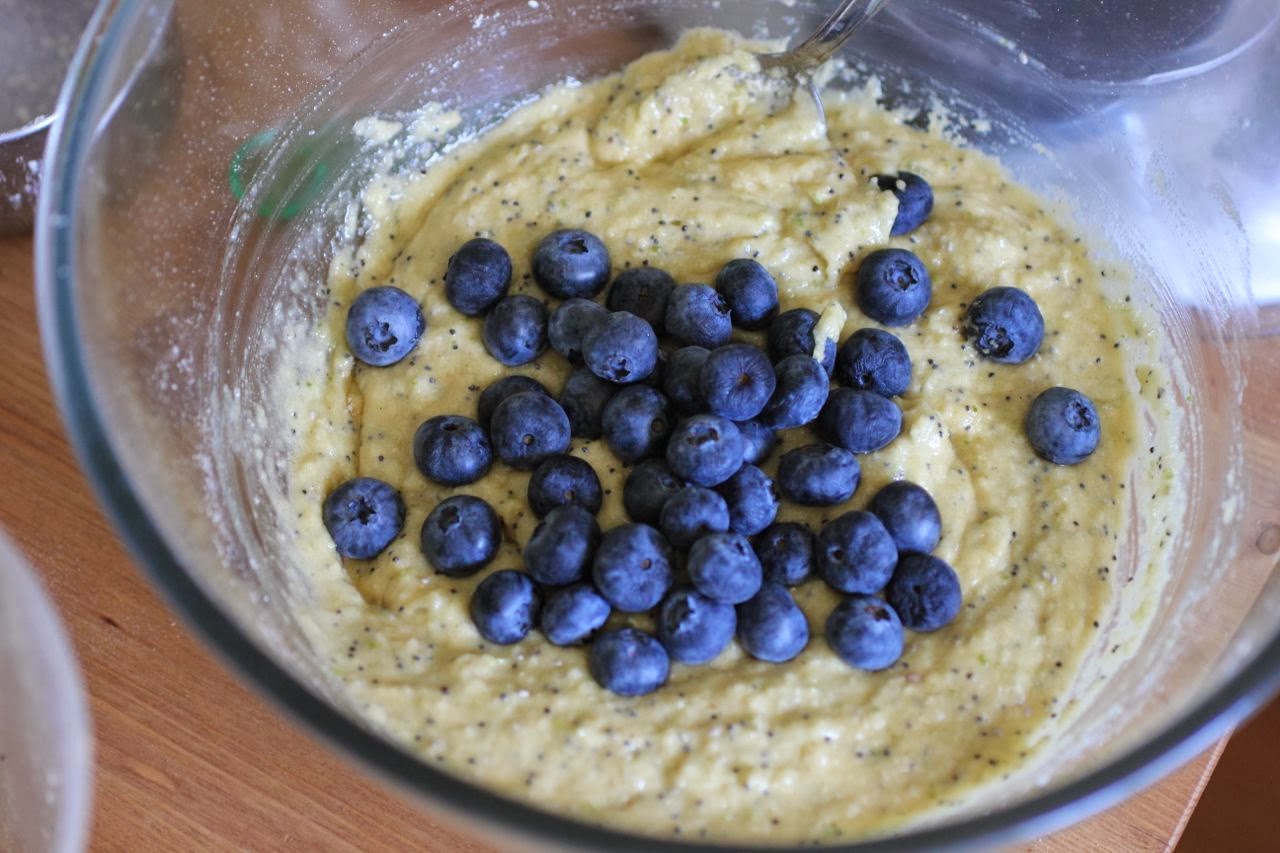 E took Sylvia op shopping while I baked the cake on the day before going to Ocean Grove.  It was lovely to tie on my apron, put on the stereo and be free of distractions.  I did some shopping and baked two cakes before they came back.  The house wasn't tidy but you can't expect miracles.  (I am particular about having a tidy house to come home to after gong away for a few nights.  The tidying happened the next morning before we left!) 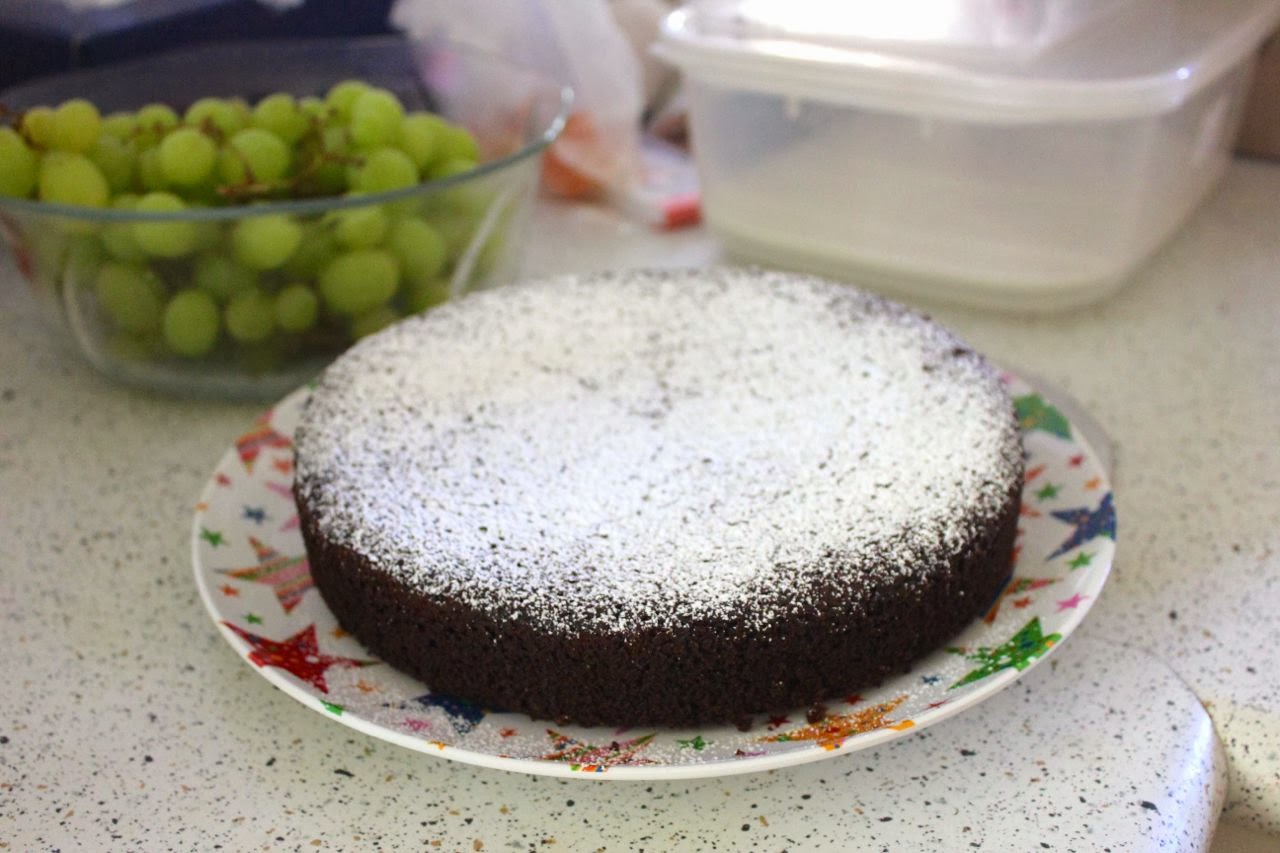 One of the ironies of blogging where a picture tells so much of the story is that sometimes the prettiest food is not necessarily the most delicious.  As was the case here.  The chocolate olive oil cake from nigella.com was amazingly soft, moist and melted in the mouth.  Even after a day it was hard to handle because it was so fragile.  (Surely the extra tsp of vinegar didn't have an impact.  I was worried it might be needed because I used Dutch processed cocoa.)

Using cocoa and olive oil made it less dense than my favourite GF chocolate cake with almond meal.  I loved how light it was.  In fact it might be a new favourite.  Especially given that it disappeared almost as fast as my mum's pavolva.  (And that is some feat!) 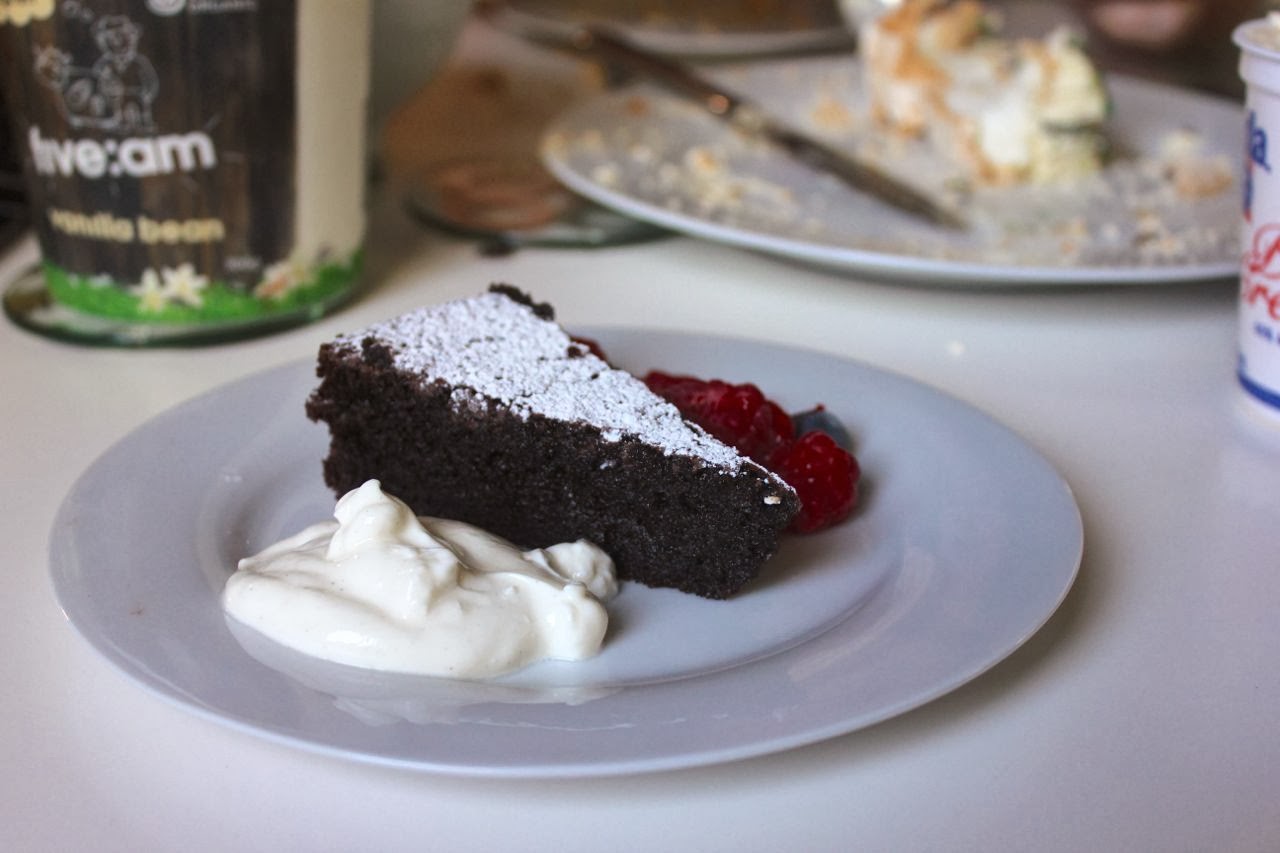 Making a cake to transport to a holiday house is a bit of a challenge.  It doesn't allow a lot of decoration options, especially when I forgot to take some stencils I meant to use for the icing sugar.  I did take a little jar of icing sugar and a small sieve.  I also forgot to take birthday candles.  My mum was delighted.  She is all for minimum fuss. 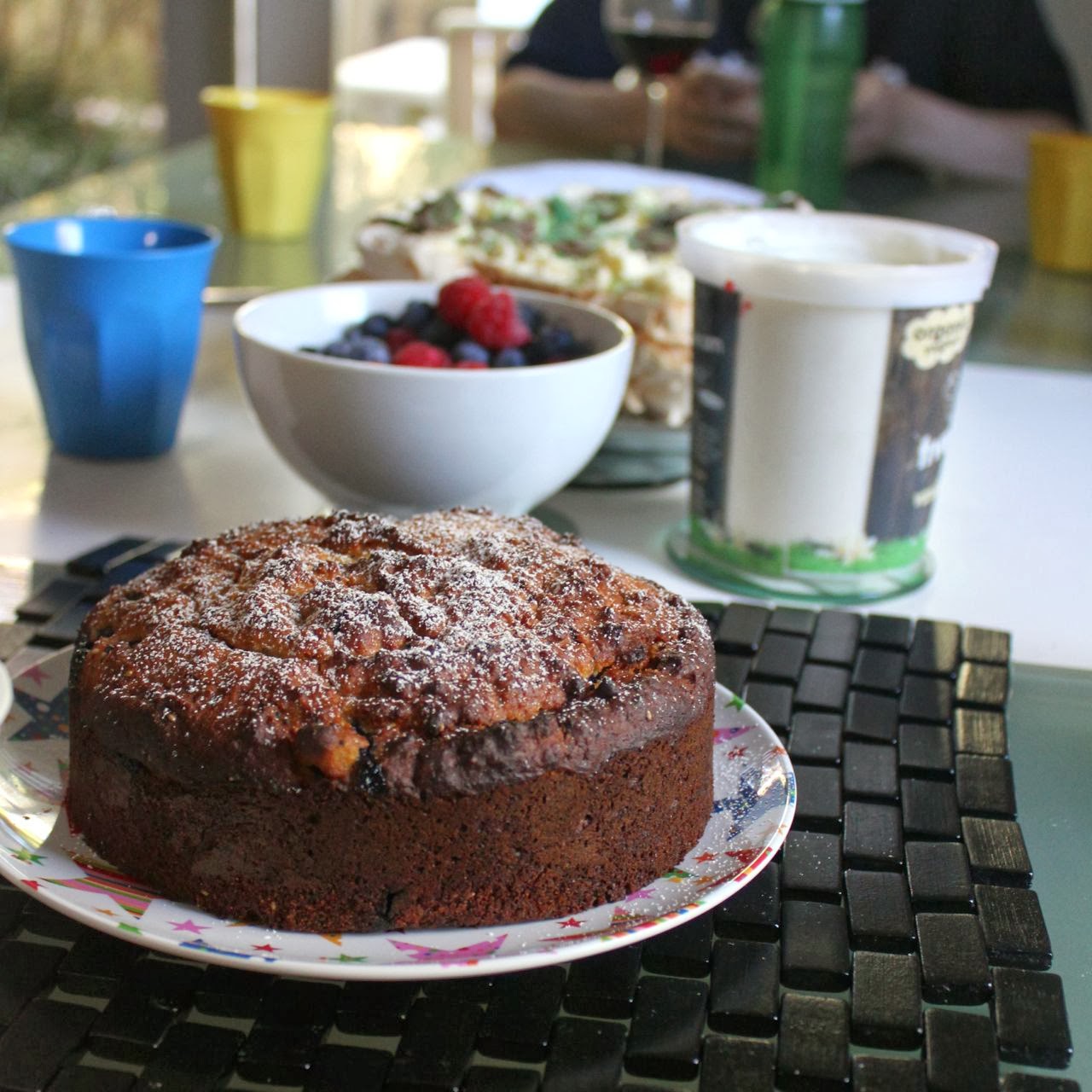 The second cake was a more whimsical choice.  When I offered my mum a few options she chose the plain chocolate cake because that is what most of the family would like.  We agreed that some of the other cakes were more interesting.  So I made a small one for her.  Sadly it didn't come out quite as amazing as it sounded.  I take the blame, rather than the Green Kitchen Stories where the recipe originated. 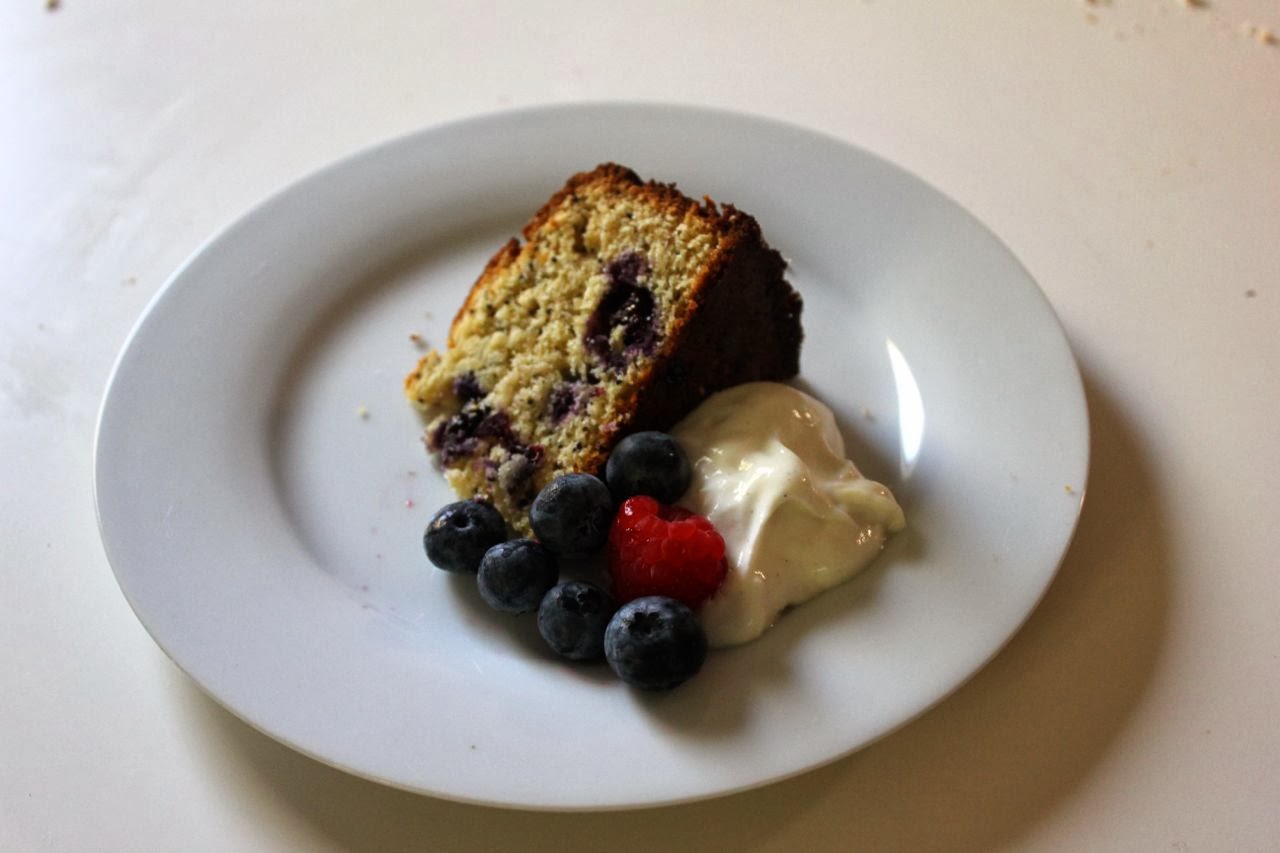 I had to tinker with the recipe to halve the size (originally in a 20cm round cake tin), including using chia seeds rather than halve an egg and trying some of the Bob Red Mills GF all purpose flour instead of almond meal.  I think the flour wasn't a great choice and in future I would use all almond meal.  I also would bake it all at 170 if baking in the smaller tin as it dried out a bit.

Perhaps it would have been more moist if I had covered it with a yoghurt frosting and blueberries.  This was a bit challenging for taking to the holiday house.  However like the chocolate cake, it was lovely with some vanilla yoghurt and berries. I am sending the chocolate olive oil cake to Jane from The HedgeCombers who has taken on co-hosting Tea Time Treats with Karen from Lavender and Lovage. The theme this month is eggs, eggs, eggs!  This cake relies on the eggs to help it rise so fits the bill.

Grease and line a 22cm round cake tin.  Preheat oven to 170 C.  Mix cocoa, coconut milk, vanilla and apple cider to a paste in a small mixing bowl.  (My paste was very thick.)   Meanwhile in a large mixing bowl, beat together sugar, olive oil and eggs for 3 minutes.  Slowly beat in the chocolate paste.  Use a spoon to gently mix in the ground almonds, bicarb soda and salt.  Bake cake for 40-55 minute (55 min for me).  It is done when sides set, middle slightly damp and a wooden skewer comes out mostly clean but perhaps with a few crumbs clinging.  Allow to sit at least 10 minutes before turning out to cool on a wire rack.

Preheat oven to 170 C.  Grease and line a round 15cm cake tin.  Place dry ingredients in a medium mixing bowl.  In a small heatproof bowl heat oil and honey til combined (I did this in microwave - use a saucepan if you want to do it over stovetop).  Add lime zest then gently mix in lime juice, egg, chia and coconut milk.  Pour honey mixture into dry ingredients and stir until combined.  Pour into cake tin.  Bake for 30-35 minutes.  (I baked mine for half the time at 180 C but I think baking at 170 might make it less dry.)

On the stereo:
Set List: The Frames
Posted by Johanna GGG at 12:45