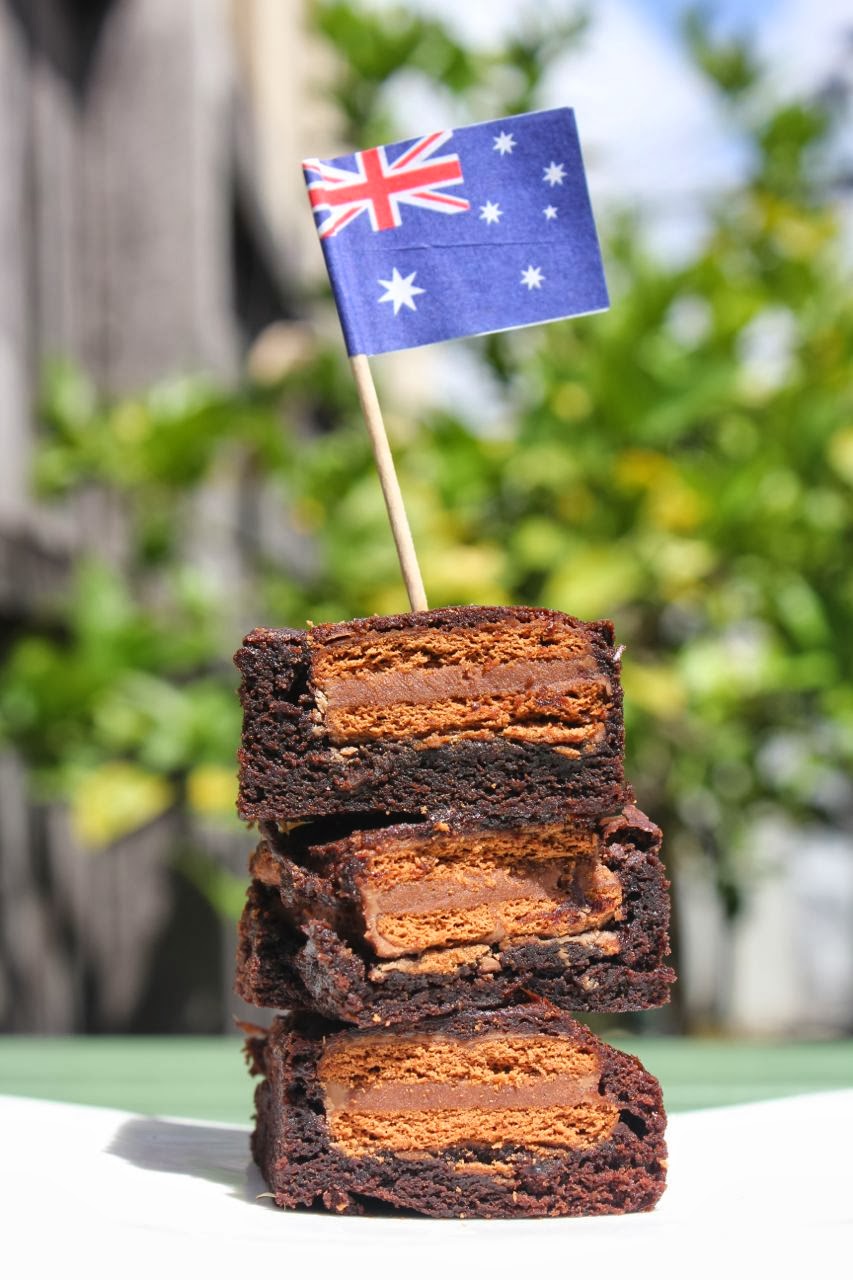 Today we celebrate Australia Day.  Day of discovery and invasion, patriotic fervour and maintaining the rage.  This year I have had fun gathering ideas through my Australia Day Pinterest Board.  It really is a great way to share ideas.  That was how these Tim Tam Brownies became lodged in my head and wouldn't go away until they were in my belly. 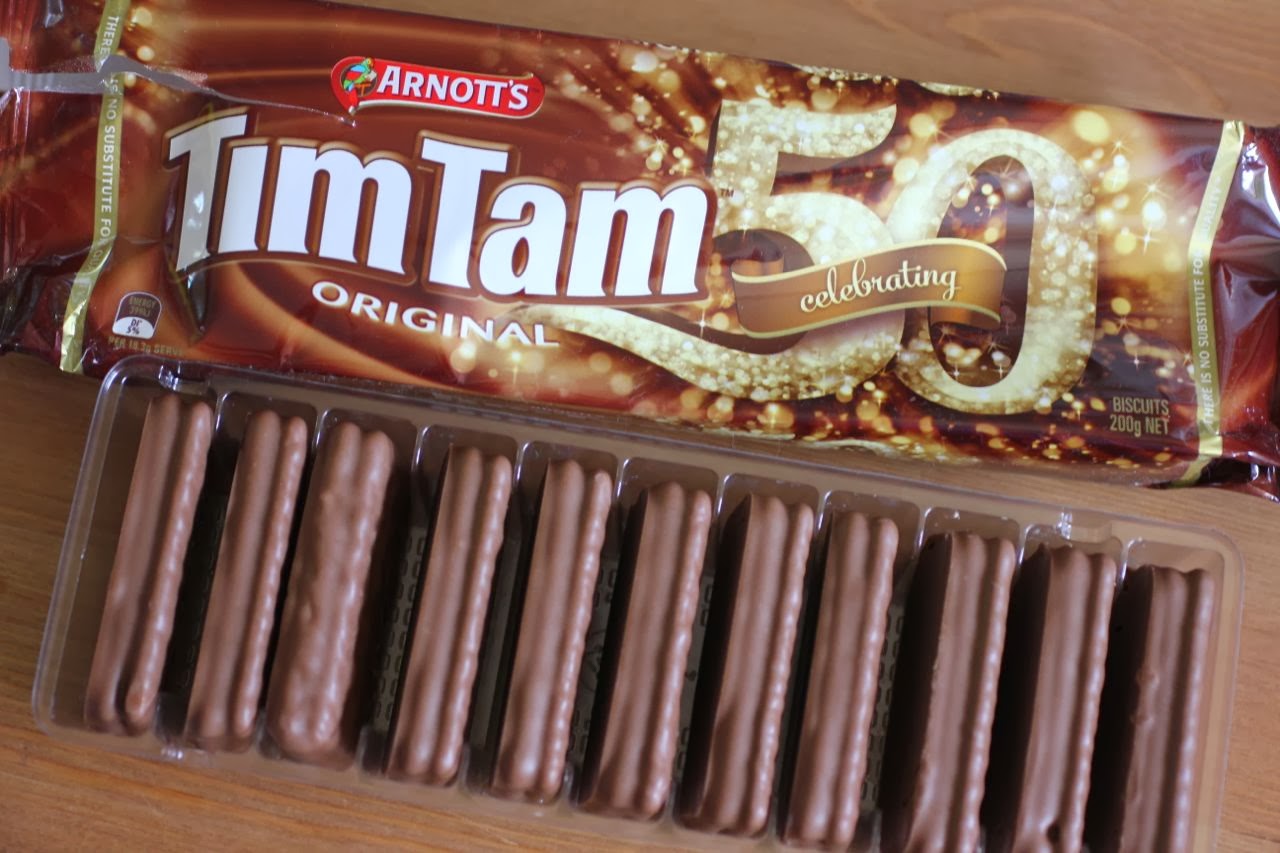 While the origins of Australia Day are somewhat dubious (the British claiming another people's land as their own), the opportunity to showcase Australia to the blogosphere is certainly fun.  This year, I have been amused by some of the creative twist on Aussie iconic food (see list below).  Like the humble Tim Tam biscuit.  Two chocolate biscuits sandwiched together with chocolate cream and covered in milk chocolate. 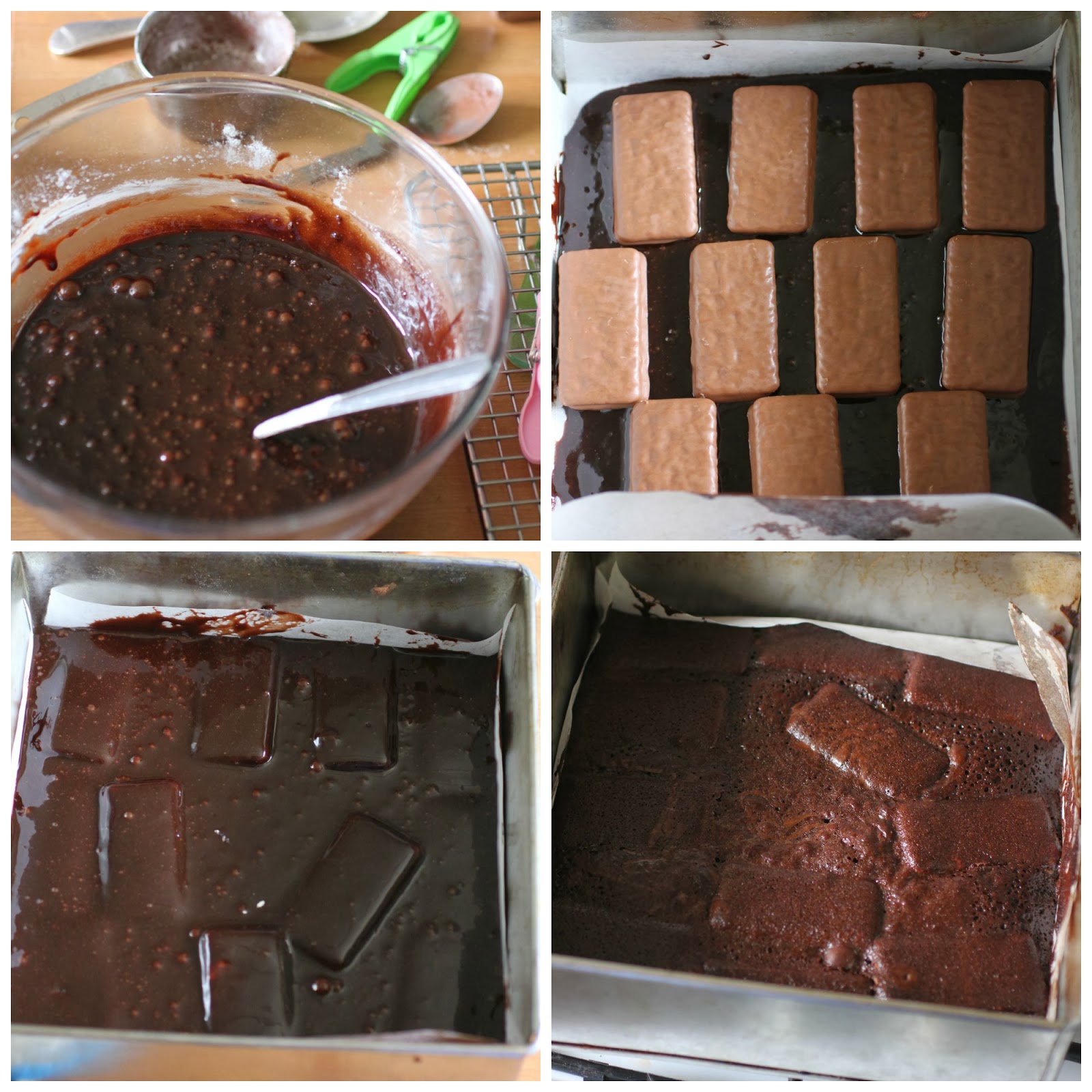 I was slightly concerned about making brownies to celebrate Australia Day.  They are about Australian as Superbowl and Oreos.  I never had brownies while I was a child.  Yet the spirit of these brownies is very Australian.

As a child, we always had a packet of biscuits in the cupboard to 'bake' with.  (Think grubs, hedgehog or chocolate ripple cake.)  And while it was always plainer than Tim Tams (an occasional treat), I think I might claim that Tim Tams are Australia's answer to oreos.Other than Tim Tams, this recipe is just like the sort that our grandmothers would make with plain ingredients that were in every Australian pantry. 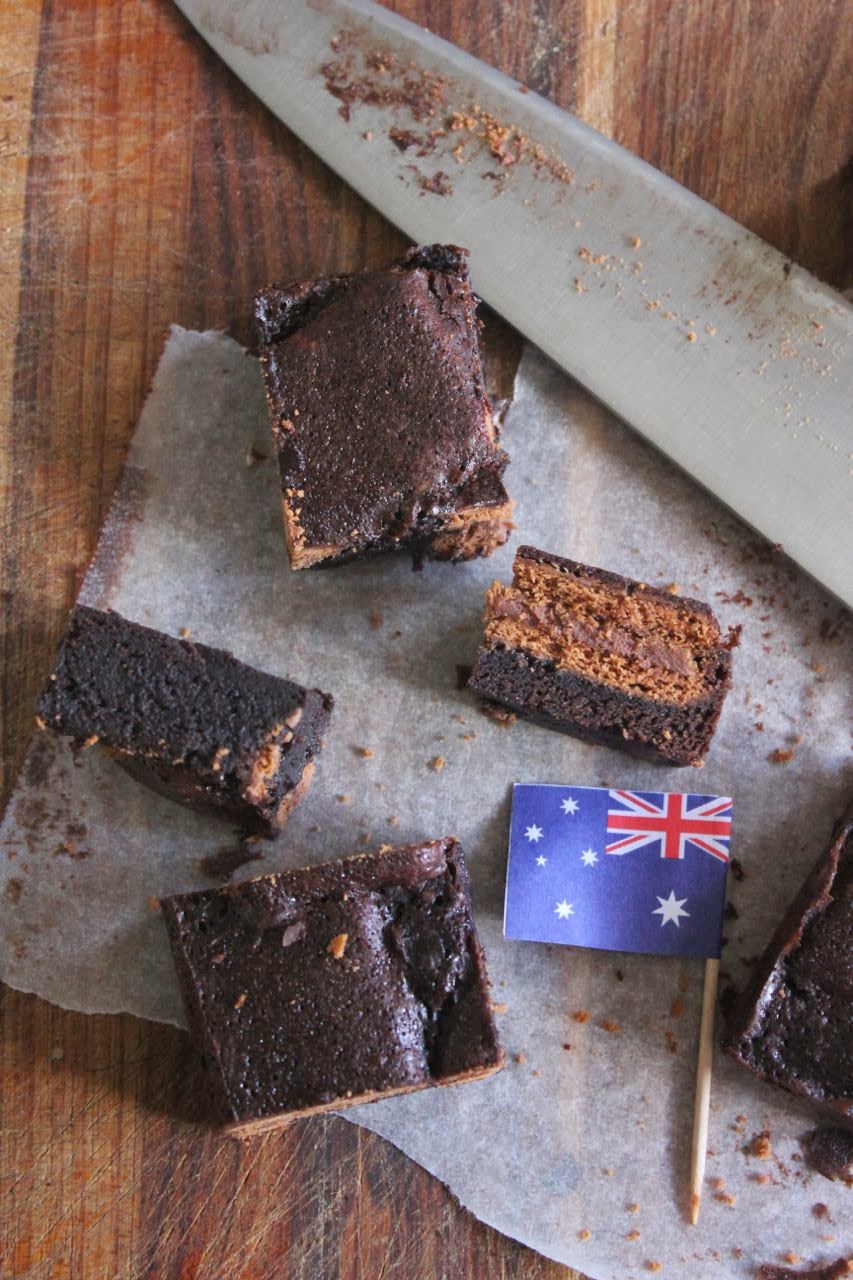 So here is my present for you on Australia Day.  Oozy gooey chocolatey tim tam brownies with a crunchy creamy biscuit interior that surprises and delights.  (Except if you are my 4 year old Sylvia who just takes the brownies off and eat the biscuits!) 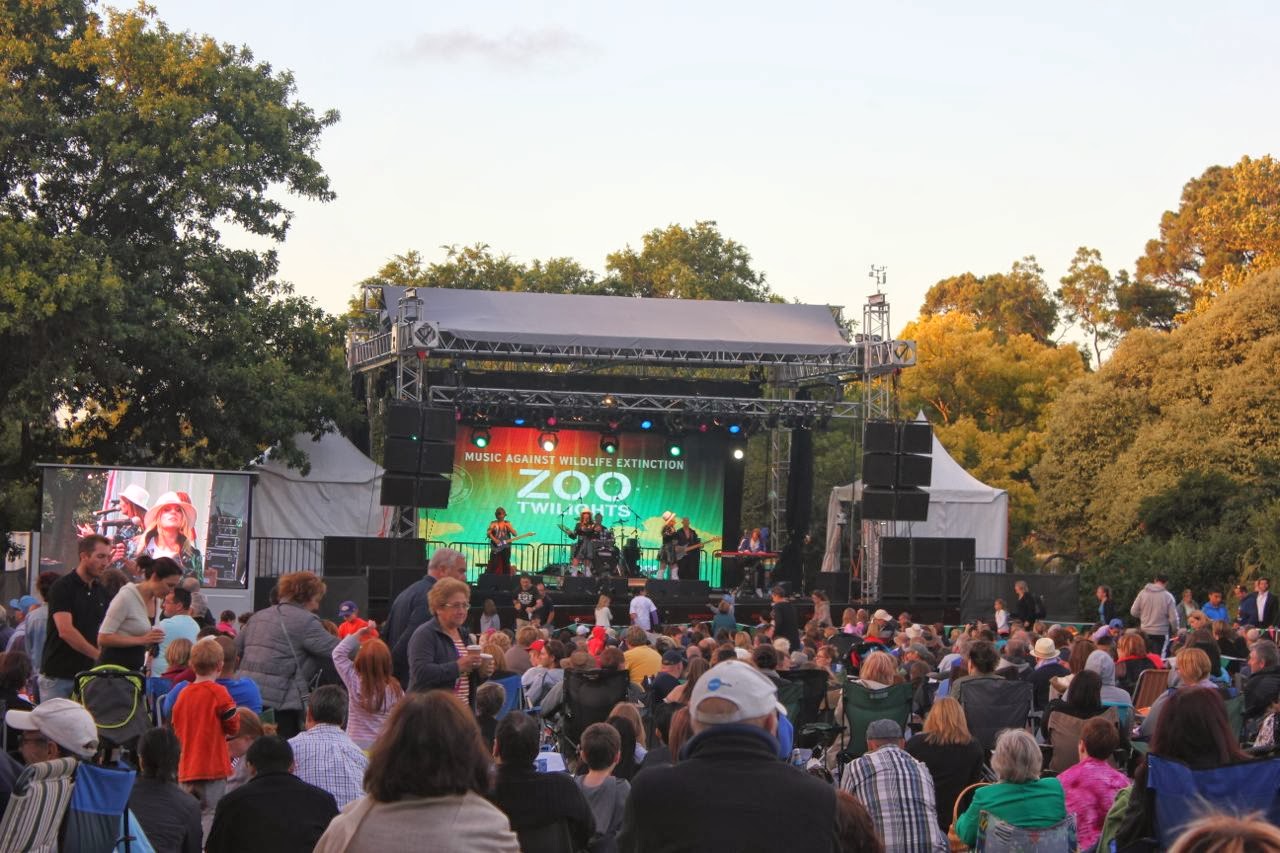 I couldn't wait to try these as they came out of the oven just as I was rushing out the door to go to the movies with E.  I took some crumbly bits in a tub.  E groaned at the messiness and then asked if I wanted any more because it tasted so good.  (The movie was Inside Llewyn Davis.  Very bleak but beautiful and thoughtful too.)  The real reason I made them was for a picnic at the zoo last night. 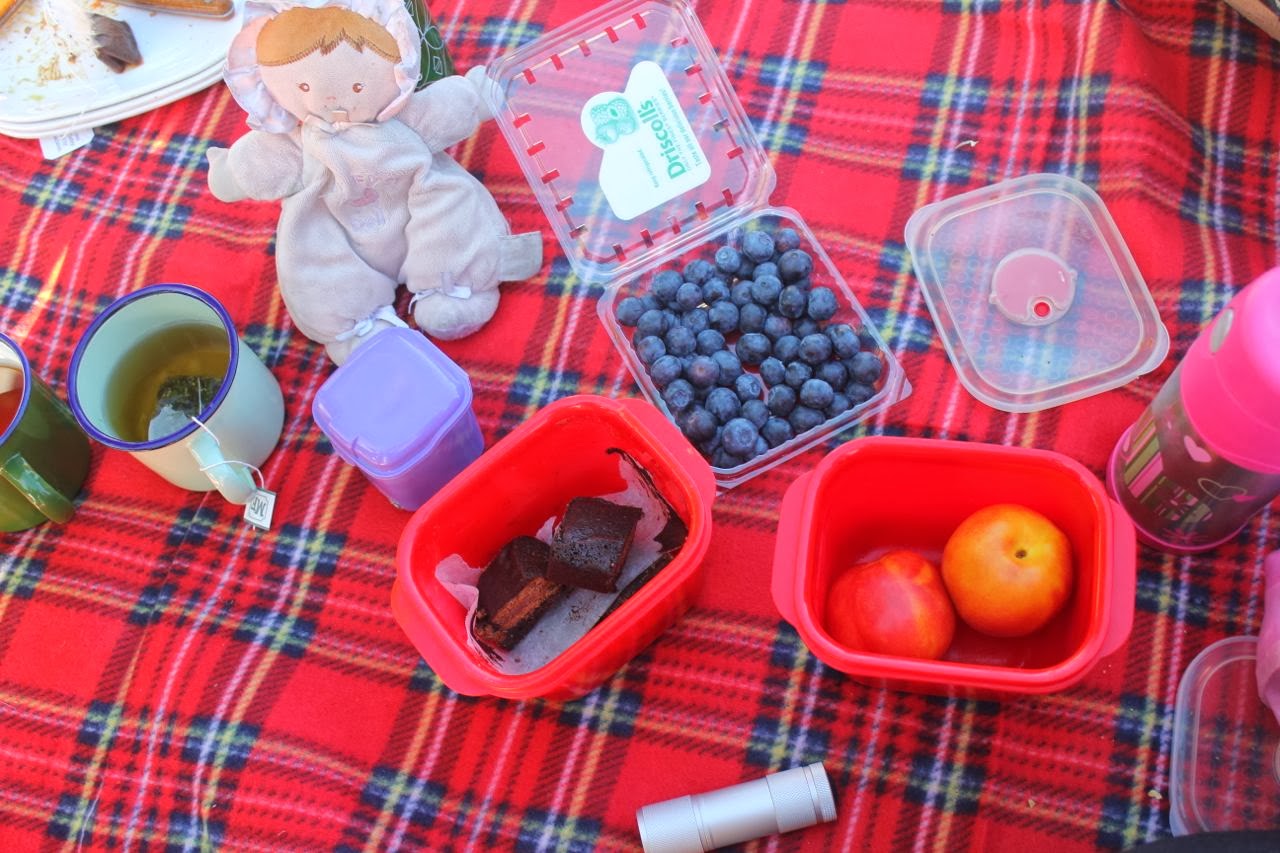 It is some years since we have been to Twilights at the Zoo.  Last night we saw an ABBA tribute group, Babba.  They were lots of fun and I knew all the songs.  We a haggis balls (more later on them) for our picnic followed by brownies and fruit.  I was unusually restrained with the food and we found ourselves going for an ice cream after watching the lions roaring at interval. 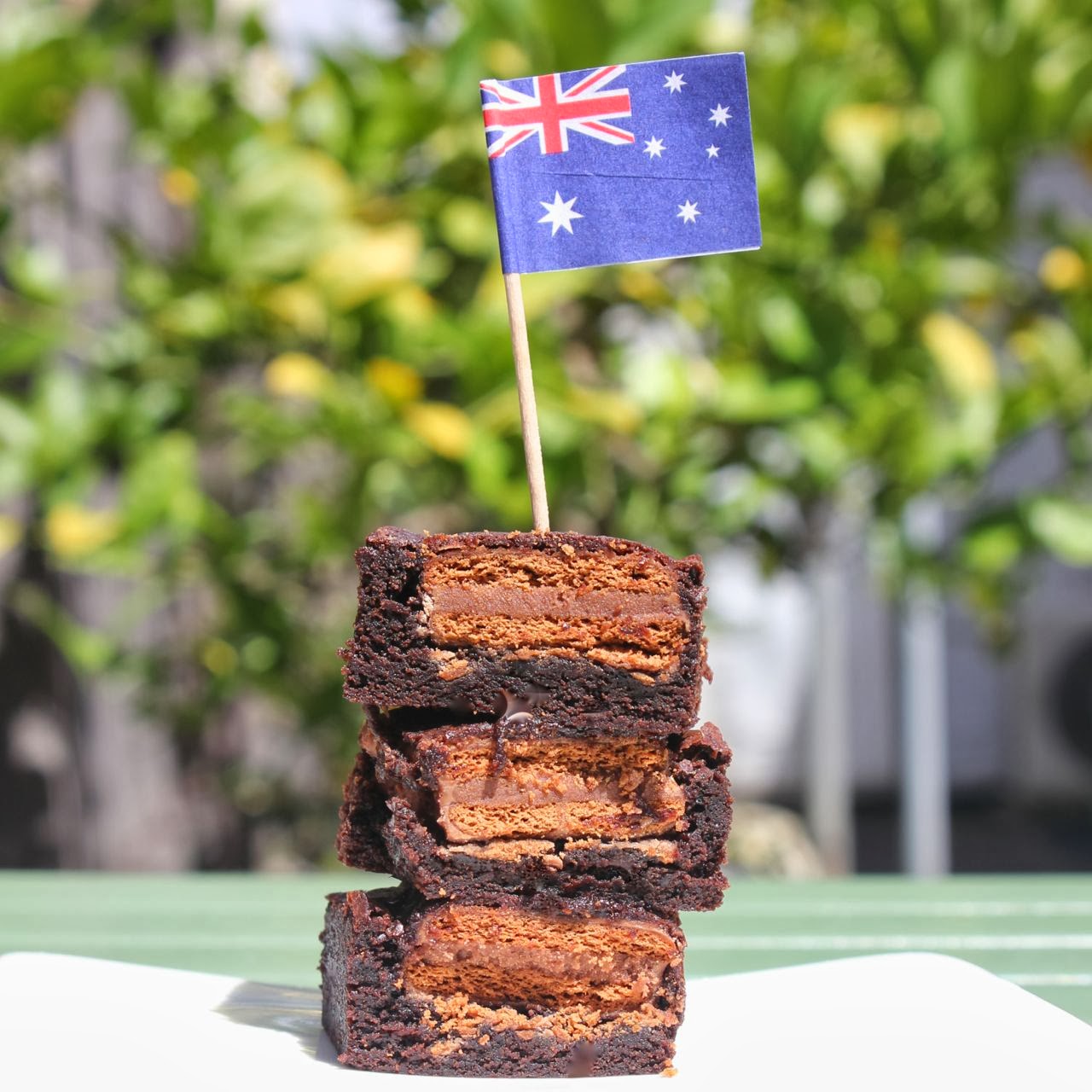 Last night was our Australia Day celebration and today we are having a quiet one.  Just a swim is planned.   I would have loved to go to the Share the Spirit Festival in the Treasury Gardens.  If only I had the energy I would.  It is a celebration of our Indigenous community, which will be even more joyous for the announcement that the Australian of the Year is Adam Goodes, Aboriginal AFL player and anti-racism campainer! 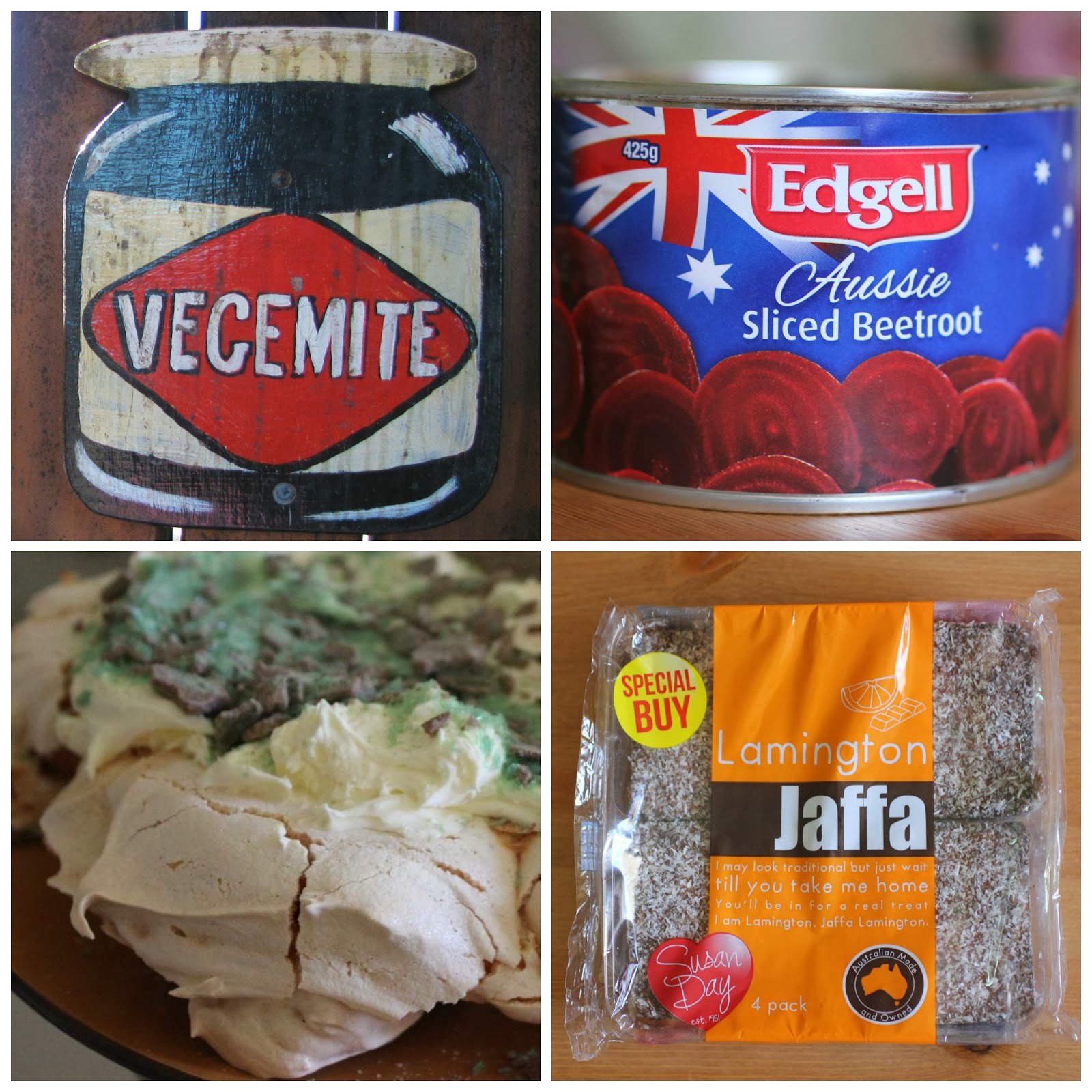 Finally, I leave you with some links to iconic and fun Aussie recipes.  Above (from top left clockwise) are an artist's impression of Vegemite at the Orange Adventure Playground, tinned beetroot with patriotic packaging, a jaffa twist on lamingtons and my mum's pavolva with cream and peppermint crisp on top.  Wishing you some Aussie yumminess and a happy Australia Day.

Australian recipes from my kitchen:

Melt butter in a heatproof medium mixing bowl in the microwave (or on the stovetop in a medium saucepan).  Stir in cocoa and brown sugar, then eggs and vanilla to make a glossy thick batter.  Stir in plain flour and salt.  Spread a thicn amount of batter in the base of the cake tin.  My batter was so thick and sticky that it took a bit of effort to spread.  Arrange tim tams on batter.  (There will be some space between them.)  Pour the rest of the batter over the tim tams so they are covered.

Bake for 15 to 20 minutes or until the brownie smells baked and a skewer comes out mostly clean (a few crumbs or a slight moisture is ok - the brownie is very sludgy).  Cool in the tin.  Cut into squares with a sharp knife.

On the Stereo:
Ruby: The Killjoys
Posted by Johanna GGG at 12:57