Q is for Quinoa pizza balls, quitting parliament and quite nice weather for a picnic 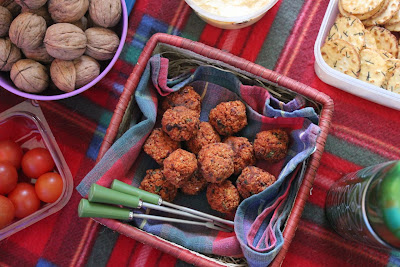 Yesterday I made a batch of quinoa pizza balls and planned to take a few quick photos today, tell you that they were slightly disappointing and then tell you about the last picnic I had.  After all I had made them for Louise's Picnic Game.  Then I set up the quinoa balls like a picnic and Sylvia and E decided to join in and we had a fun picnic at home where we enjoyed the balls.  Finally before I could write the post we find outselves in the midst of a change of prime minister.  Goodness it is hard to concentrate on these quinoa pizza balls. 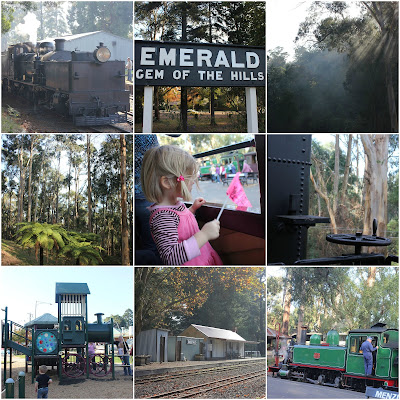 Being the middle of winter, we haven't have many picnics lately.  The last one was back in May when we went on Puffing Billy, the iconic steam train that chugs its way through bush on the outskirts of Melbourne. 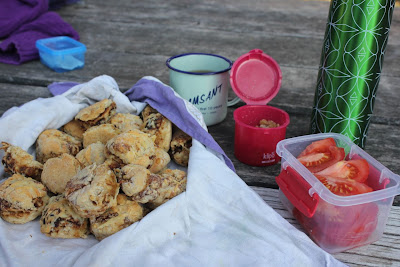 Before leaving home, I whipped up a batch of cheeseymite scones , packed them along with some walnuts, tomatoes, lamington bars and a thermos of tea.  It was simple but excellent.  We took the train to Emerald and ate our picnic at some tables by the railway line.  A charming place for a relaxing lunch. 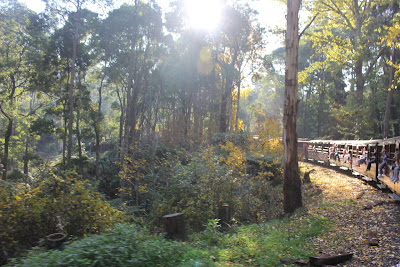 Puffing Billy is a special treat.  It is not cheap.  However we were really impressed at the way they made room for us on a full train when we arrived late.  Travelling close to the engine was very noisy.  Sylvia had her fingers in her ears a lot of the way.

Coming back we had open air seats looking out at the bush.  This is God's own country.  Spectacularly beautiful with the sun lighting up the smoke that filtered through the majestic gum trees.  It made me think of my ancestors travelling by steam train through the bush before so much of it was cleared. 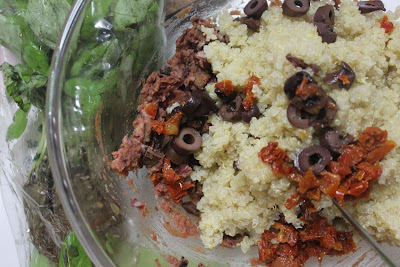 Now back to the Quinoa Pizza Balls.  The recipe came from Ricki at Diet Dessert and Dogs.  It is just the sort of snacky balls that I love.  However some tomato paste did not seem to warrant the 'pizza' in the name.  So I added some tofu bacon, sun dried tomatoes and olives.  At first I was not sure they made a difference.  Later I decided I quite liked the chewiness of the bits in the balls. 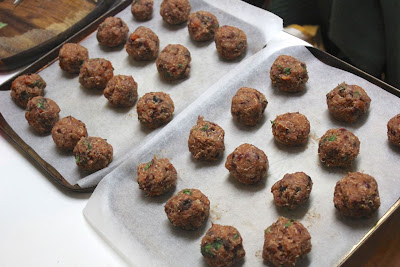 Perhaps my main problem was that my favourite pizza ingredient was missing.  Cheese!  (Ricki is vegan and more used to cheeseless pizzas than I.)  I meant to add either dairy cheese, soy cheese or nutritional yeast flakes.  I forgot.  I was distracted.  Maybe next time.  I think nutritional yeast flakes would work well for extra flavour and thickening.  The mixture was quite wet.  It looked disturbingly like raw mince meat.  At least it didn't taste like it. 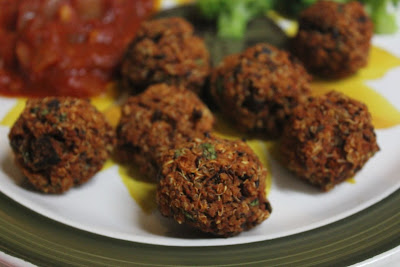 I made these balls for dinner and served them with a simple tomato sauce and steamed broccoli.  Don't do this, my friends.  The balls tasted overwhelmingly of tomato.  They don't need more tomato sauce.  I liked them far better today at room temperature with hummus. 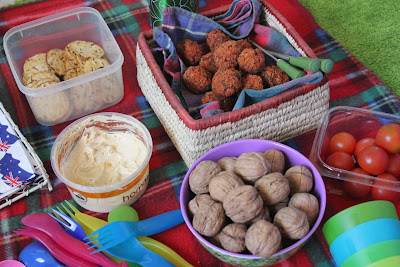 As I mentioned above, this post is written as part of Louise's picnic game.  (You remember the game you played as a child, I went on a picnic and I brought along apples, then the next person brought bananas and the next cucumber.)  She holds this every year.  Louise chooses this time of year because it is International Picnic Day on 1 July.  Everyone takes a letter to help choose a recipe to make.  I took part in 2010.  I finally had time to take part again this year.

I chose the quinoa pizza balls because picnics mean transportable finger food to me.  It also seemed timely, give that it is the International Year of Quinoa.  And did I mention they are easy to make?  When I set up my picnic to photograph, Sylvia was excited.  Before I knew it, we found ourselves actually having a picnic on her bedroom floor.  The quinoa balls were excellent.  Then we moved to warmth of the winter sun on the front verandah to continue the picnic with pikelets and lemonade.  (I will write more about both another day.) 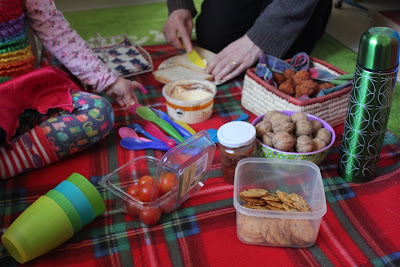 But to return to Australian politics.  It is a mess.  It saddens me.  First we had Kevin Rudd as Prime Minister.  Then Julia Guillard took over.  Kevin Rudd was upset at being turfed out.  He wouldn't let it lie.  Now Kevin Rudd is back as Prime Minister elect.  No wonder Antony Green called him Kevin Guillard.  So there goes our first woman prime minister.  Much for our nation to reflect upon.  We can expect some interesting discussions at picnics and dinner parties in this country.

And the game?  We are going on a picnic and we are bringing:

Bring the quinoa and stock to the boil.  Simmer for about 20 minutes or until all stock is absorbed.  Mash kidney beans and mix with remaining ingredients.  Stir in quinoa when it is cooked.  Roll mixture into balls the size of golf balls.  Bake until crispy and brown on the outside.  I baked mine for about 45 minutes at 200 C in my slow oven - Ricki advises to bake hers for 25 - 35 minutes at 180 C, so you may need less time for more powerful ovens.  I preferred mine room temperature with hummus the day after baking.  They can also be eaten straight from the oven or kept in the fridge a few days.

*NOTE: This recipe feels like work in progress because I would try changes, despite enjoying it.  I am not sure the tofu bacon, olives and sun dried tomatoes are essential.  The garlic was quite strong on the first night but better the next day.  Possibly less would be better.  I would also try adding nutritional yeast flakes or cheese for more pizza flavour.

On the Stereo:
Cruel Sister: Rachel Unthank and the Winterset
Posted by Johanna GGG at 23:16