Pasta Please, spinach and walnut pesto and a pasta dish 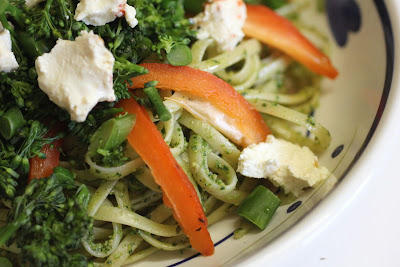 Last Friday was the sort of day when I felt like just opening a tin of baked beans and collapsing.  Too hot.  Too narky.  Too tired of work.  Fortunately I had been looking at a few pasta ideas for dinner at lunchtime that meant once E took Sylvia off for a nice cool bath, I could get dinner together fairly quickly.  It could have been easier if I didn't make the pesto and roast the capsicum but at least the yoghurt balls were marinated. 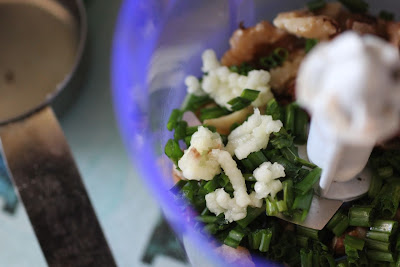 I had an idea that I would make spinach and walnut pesto.  I wished for more spinach (like in the original recipe) but had bought a silly little one serve bag.  I should have known we always get through a bigger bag of spinach.   I could have added a bit more oil to my pesto, or even better kept a bit of pasta water to loosen it up once I added the pesto to the pasta.  I had also liked a recipe I had seen for spinach and walnut pesto with mustard in it but forgot about that. 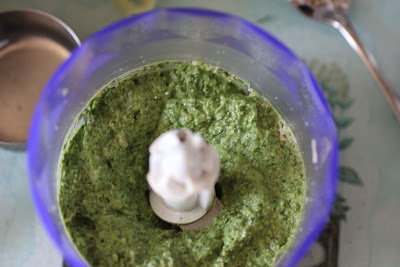 I served the pasta and pesto topped with microwaved broccolini, blistered and skinned red capsicum and my garlic, chilli and rosemary yoghurt cheese.  It would have been better if the pesto was a bit looser but the yoghurt cheese gave it great flavour and melted into the pasta like an additional sauce. 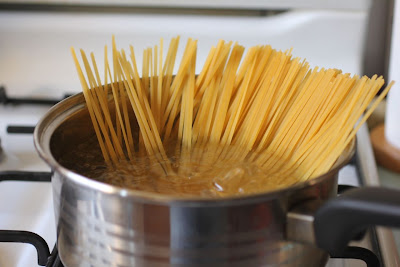 I still was longing for the day to end but at least I was pleased that dinner was slightly more upmarket than a tin of beans.  The  pesto wasn't quite right by itself - I think the seasoning needed adjustment - but was quite nice on a rice cracker with promite and tomato the next morning.  In the evening we had panzanella with the pesto, basil olive oil and tofu bacon.  It was delicious. 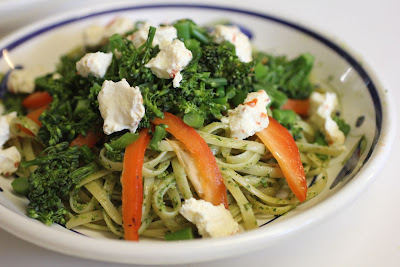 I am sending this pasta dish to Lisa of We Don't Eat Anything With a Face who is hosting the Pasta Please challenge this month.  The theme is peppers (or capsicums, as we say in Australia).  The event is coordinated by Jacqueline of Tinned Tomatoes.

Spinach and Walnut Pesto
Adapted from Krissy's Creations
serves about 4

Blend to a paste.  Keep leftovers in fridge.

Cook the spaghetti according to the packet instructions (mine took 8 minutes).  While the pasta is cooking, roast red capsicium over a gas flame and cool slightly.  While capsicum cools, microwave the broccolini until cooked.  Peel the skin off the capsicum and cut into thin strips.

When draining the pasta, keep a little pasta cooking water.  Toss the pasta with pesto and add a slosh of cooking water to loosen the sauce.  Serve in a pasta bowl.  Top with broccolini, capsicum and torn yoghurt balls.

On the Stereo:
Liege and Lief: Fairport Convention
Posted by Johanna GGG at 10:07