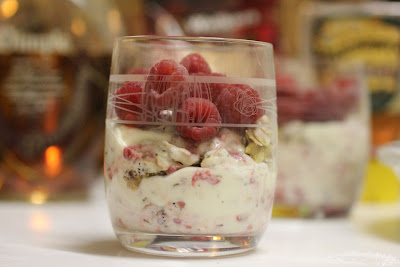 I finally did it.  I made cranachan.  While it is a simple Scottish dessert of cream, oats, raspberries, honey and whisky, I have not been sure that so much cream would be my thing.  After all I was the kid in the family of seven children that couldn't stand cream on my dessert.  But it was my birthday, raspberries are in season, I had some extra yoghurt and a bit of time. 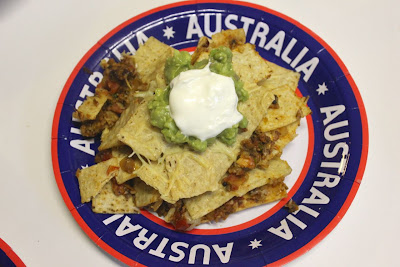 On my birthday I had leftover haggis from our Burns Supper so we ate haggis nachos followed by cranachan.  I'd noticed Jacqueline suggesting that Greek yoghurt might be substituted for cream.  I sat on the fence and used half cream and half yoghurt.  The cream and yoghurt were both thick so I didn't bother to whip the cream. 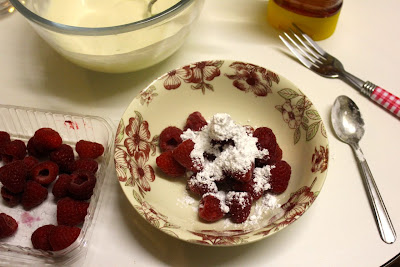 I served it in some glasses with a Rennie Mackintosh design that I bought in Scotland years ago but don't use often.  We ate it in front of a movie called Peterson.  I am not sure I would recommend it with a few disturbing scenes but it was an interesting insight into 1970s Melbourne. 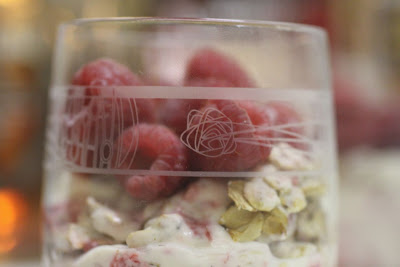 The cranachan was lovely.  Rich, yes!  But also full of flavour and fruit.  The oats weren't quite as crispy as I would have liked.  (Surely the quick photos I took for the blog didn't make them go soggy in the cream mixture.)  Mixing the cream and yoghurt was good.  The yoghurt cut through a little of the richness.  And the raspberries were superb.

I am sending this dessert to Caroline of Cake, Crumbs and Cooking for this month's Simple and in Season event, founded by Ren of Fabulicious Food.

Previously on Green Gourmet Giraffe:
One year ago: Bush birthday banana cake and other self catering ...
Two years ago:  Gang of Four meme
Three years ago: Pizza for the Working Woman
Four years ago: Harvest Café - country bounty
Five years ago: Polenta and Tomato Comforts