Lamingtons at the beach 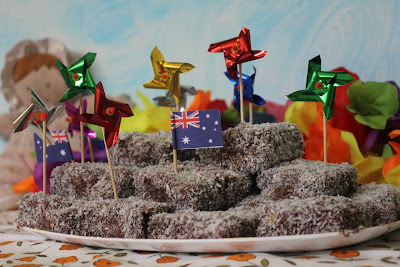 Lamingtons are one of the recipes that fill me with a sense of responsibility to both my past generations who taught me about them and to my daughter so that she will have the same lovely memories that I have of making them with my mum.  Sponge cake, chocolate icing and coconut all featured heavily in my childhood.  Yet I have never made them before because they intimidate me.  Too many eggs.  Making sure a sponge rises.  Getting the chocolate icing consistency right.  Fiddly.  So I was excited to make these for my birthday celebrations with my family this year.

Lamingtons do maketh the birthday.  Presents are also fun.  Especially if you are 3 years old.  Below is the package that Sylvia wrapped for me all by herself.  Full of her own toys and cut up paper.  And a little ballerina and angel for me.  Bless!  Before I tell you about my lamingtons, I can't resist giving you a little insight into their history and culture. 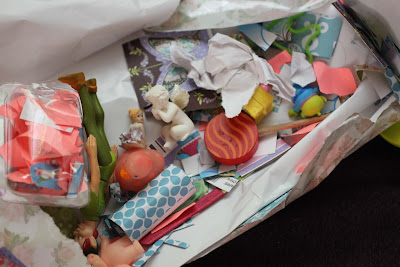 It is no coincidence that I made these lamingtons soon after Australia Day.  They are an iconic Aussie cake.  There are a few different stories about how they originated.  Stale cake needed to be used, the maid dropped cake in the icing, named after a Homburg hat, made out of lemmings, similar to Leamington cakes or they were made in a cookery school and named in honour of the patron Lady Lamington.  Apparently New Zealanders and Scots also take credit.  The Scots attribute them to being made by sheep shearer's wif in the village of Lamington.  Take your pick!

The name is usually atrributed to Charles Wallace Alexander Napier Cochrane-Baillie, Governor of Queensland between 1895 and 1901.  There is a story that he hated the cakes, referring to them as "those bloody poofy woolly biscuits", but it seems it is a myth.  More likely is that their popularity can be partly attributed to the chocolate icing keeping the cake fresher in our warm climate. 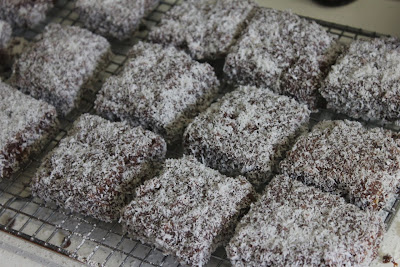 No matter how lamingtons have made their way into our culture, they have found a special place in our hearts and our culture: 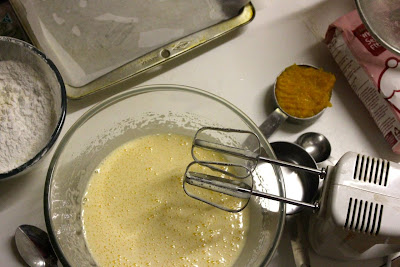 For me, lamingtons are vaguely associated with fundraising but mostly they make me think of my Nan.  In my memory she never made us a meal without a plate of lamingtons for afters, bought from the store with a middle layer of jam.  She would always cut them in half on the diagonal and I would always try to find a lamington with lots of jam in the middle.  (I don't know why she always bought them as she baked lots of other cakes.)  My memories of homemade lamingtons comes from my mum. 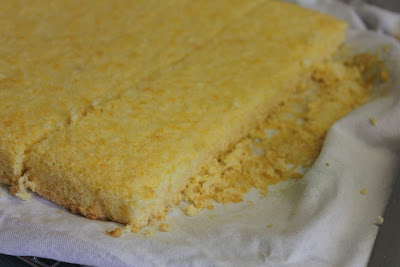 It is not surprising that my mum is a whizz at lamingtons.  She has perfected the art of making the sponge cake.  There are two different cakes that go into lamingtons.  One has butter and the other is like an Aussie sponge with lots of eggs and no shortening.  As my mother's daughter I chose the sponge recipe.  It had 6 eggs.  That is more than I am comfortable with.  Sponge cakes are not easy.  They have to be treated with kid gloves or they will never rise into cakes that are light as a feather.

I got into my head that I would make pumpkin lamingtons but I ended up just substituting some pumpkin for 2 eggs.   (I don't think you would have known there was pumpkin in there unless you were told.)  I got out my beaters and beat the egg a long time anyway.  The creamy batter tasted of cooking at my mum's.  My sponge took 30 minutes (thanks dodgy oven) and was quite damp.  Perhaps it was my fault for adding some pumpkin or forgetting to take it out of the tin after a few minutes.  When I got up the next morning to cut into into squares, it was quite a challenge to take it off the tea towel (with an eggflip).  It was so sticky on the outside that I worried the cake was unbaked but it was ok inside. 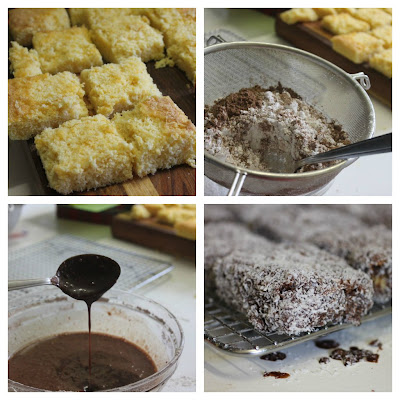 Making the icing was a bit scary.  I am not usually a big fan of icing so I don't make it a lot.  Icing for the lamingtons has to be just right.  Thin enough to dip a wedge of cake in but thick enough so it clings to the cake and doesn't slide off.  There are recipes using melted chocolate but I chose to use a traditional one using milk and water.  I had to make extra icing as I ran out (and adjusted this in the recipe), though I still had heaps of coconut left at the end.  I had thought I might make the lamingtons early by myself but was sort of glad that Sylvia got up to help.  I want her to remember making lamingtons as a child, just like I do. 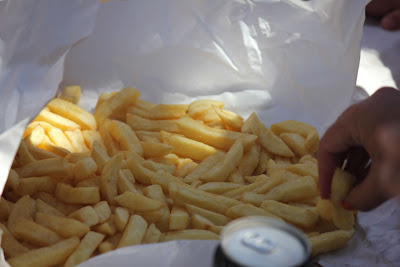 One reason I decided to make lamingtons rather than the large cake I usually have with my family was that I am starting to embrace my summer birthday and decided I would like fish and chips on the beach with them this year.   No I didn't have fish but I still call them "fish and chips" as I have discussed before.  Our order took a while and when it came, the chip portions were mingy.  We decided they must have given us diet portions.  No one was full as a state school, as we often find ourselves if the chip portions are generous.  However not only did we have dessert but we sat very near an ice cream van. 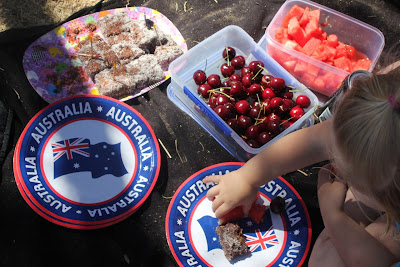 Lamingtons seemed a good Aussie dessert and also very portable.  I also took along some cherries and watermelon.  (Unfortunately we forgot to bring my sister's GF lamingtons).  I brought along some sparklers leftover from New Years Eve.  I had learnt last year the folly of trying to light candles outdoors.  It was a perfect birthday lunch, if not the healthiest. 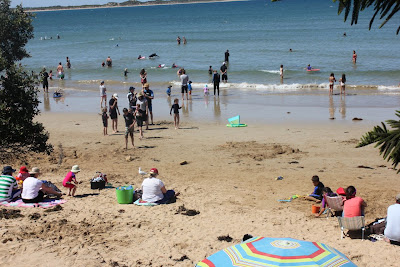 We had a great time at Torquay in a piece of beach that my sister Susie says is called Cosy Corner.  It was not a particularly hot day.  Which probably helped us park our cars.  We found a spot in the shade to eat lunch.  E spent most of his time there playing his ukele.  Baby Stella also stayed there in her pram.  Some of the kids, Sylvia included, had sandcastle wars, while others went in the water.  It was cold at first but lovely once you got used to it.  I might spend more time going to the beach if E and Sylvia would go in the water.  It was great to spend time there with my siblings and nieces and nephew. 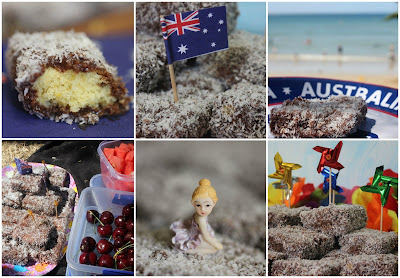 E said how nice the fresh lamingtons were.  Much nicer than those he has had from cafes.  It makes a difference if the lamingtons are fresh with the chocolate soaking in to the cake rather than hardened on the outside.  I was really pleased with my first attempt by myself.  They were as good as I remembered making with my mum.  I am a fan of Mr P's Delicious Delicious Delicious Lamington Challenges and quite fancy trying some different versions of the classic recipe.

I am sending these to Jacqueline's Bookmarked Recipes event.

Sift the flours into a medium bowl.  Place eggs in a large bowl and beat well with electric beaters until pale and creamy.  Add mashed pumpkin and beat well.  Gradually add the sugar until the mixture is creamy and the sugar dissolved.  Dribble the boiling water down the side of the bowl and very gently fold in the flours.  Bake in a lined lamington tin (31 x  24cm - according to the supermarket tin labels is the same as a swiss roll tin) and for 20 minutes at 160 C.  (It took me 30 minutes.)  The cake is ready when it is a pale golden brown and a skewer comes out clean.

Turn cake onto a tea towel covered wire rack and cover with a tea towel.  Leave overnight.  The next morning cut into squares (I think I made 15 - the recipe said to trim but I didn't need to because mine were so sticky around the edges.)  Mix up the chocolate icing ingredients with a spoon in a wide bowl.  Place the coconut in a large shallow bowl.  (The bowl shouldn't be too full or the coconut will spill over the sides when dipping.)

Using two forks dip each piece of cake into the chocolate icing until well coated and drop into the coconut.  Use another pair of forks to gently toss coconut over the chocolate icing until covered.  Carefully lift with your fingers and place on a wire rack to set for about 1 hour.  (Lifting the lamginton out of the coconut was most tricky because it was hard to do without leaving marks in the coconut.)  The recipe said that the icing should set but I am not sure that mine did.  After about an hour I was able to pile them onto a serving plate.

On the Stereo:
Les Misérables: Highlights from the Motion Picture
Posted by Johanna GGG at 23:41