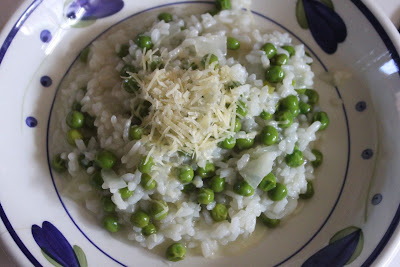 E asked for risotto for dinner.  We were able to scrape by without going shopping.  I had peas in the freezer, parmesan in the fridge and verjuice on the kitchen bench.  It seemed a simple enough dish to offer to Sylvia.  She loves rice after all.  I am pleased to say it was a success.

Verjuice is an acidic juice drink (often made with sour grapes) that was widely used in the Middle Ages and in recent times has been popularised in Australia by Maggie Beer. I have finally got on the verjuice wagon thanks to receiving a bottle for my birthday.  It can be used in place or wine or vinegar.  I usually use wine in my risotto but I thought that if I was offering risotto to Sylvia, this would be a good time to try it.  After all I had seen a recipe by Maggie Beer for Pumpkin and Verjuice Risotto. 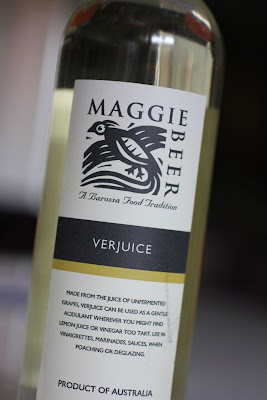 We had a ceremonial opening of the verjuice.  I stuck my finger in the juice and licked it.  I had expected something milder.  It was quite tart.  E had a taste.  Not terribly impressed.  Sylvia had a taste, and another, and another.  She was smitten.  Not surprising as she loves lemons and limes and sour worm lollies.  I poured her a couple of tiny glassfuls that she drank.

A quick web search turned up some pea risotto recipes that included pea puree, mint, parsley or feta.  My risotto was fairly plain.  I was delighted the Sylvia ate it.  She didn't like the onion but tried a few pieces.  She wasn't keen on the peas in the risotto (but had eaten some half defrosted ones earlier while I was preparing it).  Seems I might be making some plain risottos and adding our vegies at the end for a while. 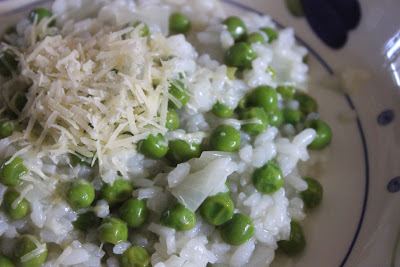 I have written what I did below.  I only had a little less than a cup of arborio rice left in the pantry and then I forgot I had put salt in when I added the stock powder.  It was quite soupy but the liquid was absorbed as it cooled.  I am recording it as a reminder but may try and tweak the recipe slightly at some stage.

Fill the kettle and bring to the boil while you start the risotto.

Heat large saucepan and add olive oil and butter.  Cook the onion in the oil and butter for a few minutes, stirring every now and again.  The onion should be translucent but not brown.  I add a pinch of salt to it at the start which apparently stops it browning.  Add the rice and stir frequently for a couple of minutes until a translucent halo appears around the outside of the rice with a white core.

Add verjuice and stir frequently until mostly absorbed.  Now add 3 cups of boiling water, a cup at a time, letting the rice absorb most of the liquid each time.  Stir in the peas and then add the last cup gradually as you may not need all of it.  Keep checking if the rice is cooked by tasting it and once it is cooked turn off the heat.

On the Stereo:
No Earthly Man: Alasdair Roberts
Posted by Johanna GGG at 23:36