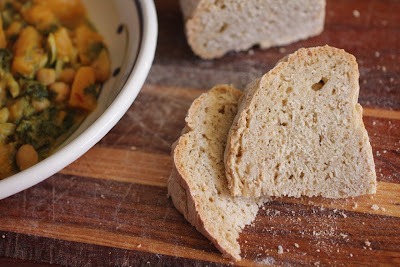 It is only Wednesday and yet it feels like a long week.  Already we have had a heatwave, a picnic in the rain, powercuts, a haircut, and unsettled nights.  The bread I bring you today is just the thing for such weeks.  I made it a few weekends back when we didn't have bread in the house and Sylvia and I were about to head off for a swim.  It seemed easier to make a quick loaf for lunch before we went than to faff about with a yeasted loaf. 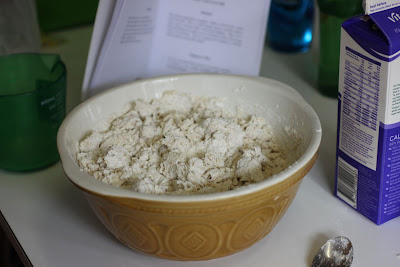 Don't get me wrong.  I love yeasted bread.  I love kneading and rising and waiting.  It is just that some days I can't organise my life around a loaf.  I also was given the Irish book, Bread, Scones, Stories and Songs, for my birthday.  It interested me because the breads were all yeast-free.  Some had eggs and butter but quite a few didn't. 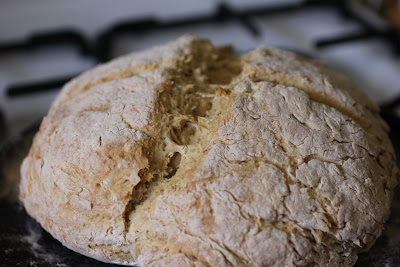 I am familiar with the tradition of soda bread from Ireland.  This book has a range of breads of which soda bread is but one.  These are recipes from home cooks who can whip a loaf of bread together in no time at all.  No doubt it is eaten just as quickly by large families.  Families who believe in fairies.  Well some do it seems, according to the book.  The best tidbit of information in the book is the belief by some that the slash in the bread is to let the fairies out. Doesn't that make the slashing a more joyful activity!  I am curious to try more of these breads. 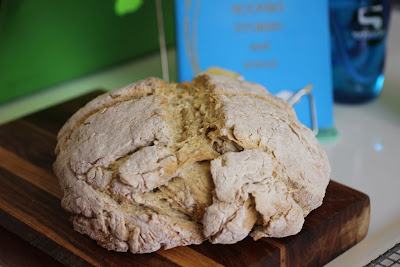 Some terms used in the book are foreign to me.  Bextartar (cream of tartar) and bread soda (bicarbonate of soda or baking soda) are explained.  I am not quite sure what is meant by "sweet milk" in the recipe I used.  I used soy milk, which is what we have on hand these days.  It always seems a wee bit sweeter than dairy milk so I thought this would be fine. The bread took me quite some time to cook.  I used a skewer when the timer rang because it just didn't feel/look right.  Sure enough the skewer came out of the middle with mixture still on it.  I blame my oven not the book.  When the bread finally came out it was craggy and quite dense.  It was an excellent rustic loaf to be enjoyed with cheese and vegemite or stew.  E noted that it wasn't very salty.  I didn't mind this as I thought it still had quite a bit of flavour. 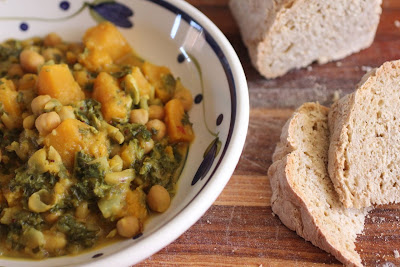 The  stew that I served with the bread was a pumpkin, kale and chickpea curry.  It was ok but not brilliant.  I quite enjoyed it the following day when I added some extra coconut milk and salt.  I have written work-in-progress next to the recipe but I think that it was rather good once I tweaked it but I feel I need to make it again and check the recipe is right.  I almost made it again tonight but instead I decided to make this stew which I loved first time round and is quite similar.

I am sending the stew to Lisa of Lisa's Kitchen who has generously taken over responsibility for My Legume Love Affair, the monthly event celebrating beans and lentils and legumes that Susan of The Well Seasoned Cook founded.  Lisa is also hosting the February edition.

Mix the dry ingredients and add the milk.  Mix to a soft dough and knead lightly for a couple of minutes until it comes together into a big scone.  I added 650ml and it was quite sticky but was fine with a little extra flour when kneading.  Place on a floured baking tray.  Slash a cross on top of the dough with a sharp knife.  Bake at 190 C for 45 minutes (my oven is a bit slow but it took me 1 hour and 10 minutes).  Cool on a wire rack.

Fry onion in oil in large saucepan until browned.  Add garlic, ginger, curry leaves, turmeric, cumin seeds, and mustard seeds.  Cook for a minute or two until the seeds are smelling cooked.  Add remaining ingredients and simmer for about 20-30 minutes.

On the stereo:
The Moths are Real: Serafina Steer
Posted by Johanna GGG at 23:19