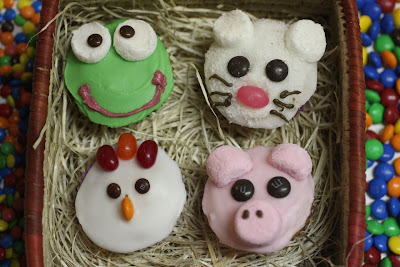 Last week found me making two batches of cupcakes for Sylvia's birthday.  One was decorated with sprinkles and the other batch became farm animals inspired by Hold the Beef and Pinterest.  I baked and decorated the cupcakes after work.  It was a challenge that saw me cycling to the supermarket in the dark for icing sugar, allowing Sylvia stay up late to help with some and finishing around midnight.  They made the kids happy.  That makes it worthwhile. 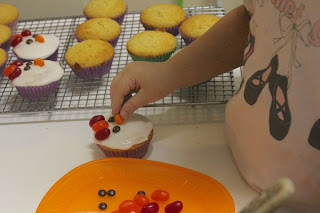 I made about 18 cupcakes (using cupcake papers that are slightly smaller than muffin papers) using the Butterless Butter Cake recipe that I had used for her birthday last year.  Then I found I didn't have enough icing sugar.  Hence my emergency dash to the shops.  When I returned Sylvia wasn't asleep.  She was up and waiting to help out.  I know I should have sent her to bed but she was so sweet helping me.  She knew she had to be on her best behaviour. 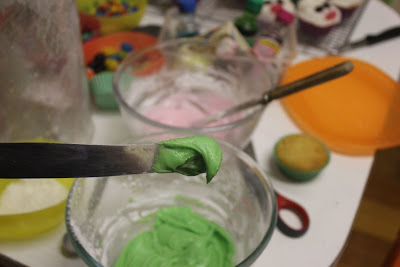 The animals that Conor made in Hold the Beef were a chicken, mouse, pig, and monkey.  Sylvia decided we had to have frogs.  I think it might have had something to do with her best friend having frog cupcakes last year.  I was pleased to have some green cupcakes, even if I couldn't find a template to do exactly as I wanted.  A little improvisation was all the was needed.  (But I urge you to check out Conor's drawings she made to plan her cupcakes.) 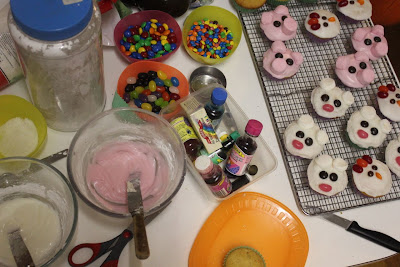 As you can see, we had far more lollies that we needed - m&ms galore, jelly beans and marshmallows.  (A note on the marshmallows.  The ones we used had gelatine and weren't vegetarian.)  When you see my piping, you might understand why I love decorating with lollies.  Maybe it is a lack of practice, but I can't pipe icing to save myself. 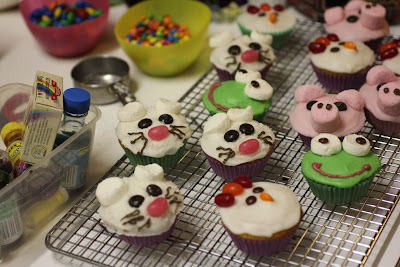 It was lots of fun.  We ate too many lollies, despite being on best behaviour.  I got food colouring all over my fingers.  Sylvia was a mess of sweet and sticky.  We took the cupcakes to childcare the next day.

Sylvia was very proud of the ones she had helped to make - the white ones - but she chose a pink one each for her and her best friend.  I had worried that they kids might argue over who got which cupcake.  I shouldn't have worried.  The kids loved discussing which animal they had chosen. 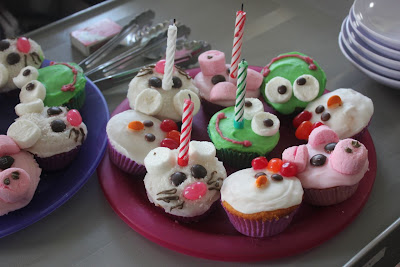 How to make animal cupcakes:

There isn't a recipe.  These are easy enough that we could make them by looking at the pictures.  So I will just share a few comments and advice. 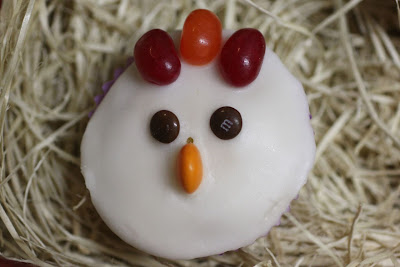 The easiest one:
Decorations: red and orange jelly beans, brown mini m&ms, orange m&m (needs to be pushed in firmly to stand up as the beak)

The chick, the chicken, the chook or, as Sylvia called it, the chooken.  This was so easy that Sylvia could make them with very little guidance.  These are the only truly vegetarian cupcakes.  I think they would be good for Easter.  Maybe next time I would like to try some yellow icing for these ones. 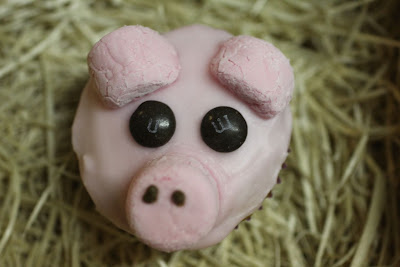 The pig.  Goodness I wish it wasn't so stereotypical but this was the one Sylvia loved because it was pink.  Not that she necessarily associates pink with girls.  When my dad arrived, she insisted that he had a pig cupcake because she was sure that he loved pink too.  And the marshmallows were the first bit to be eaten. 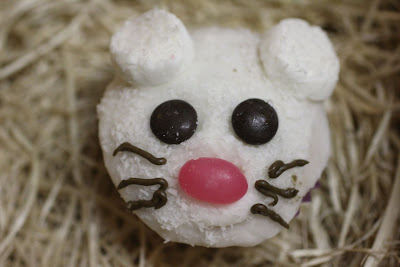 The one that could be many animals:
Decorations: dessicated coconut, marshmallows, pink jelly bean, brown m&m, icing whiskers

We had quite some discussion about if these were cats or mice.  Finally we decided mice.  I am sure with a little changes to the ears they could be cats or dogs.  There are probably other options for the ears rather than marshmallows so that they would be vegetarian.  Orange cats with orange fruit leather?  Cutting out jubes?  Conor used chocolate sprinkles for the whiskers.  I think next time I might like to try some fine slivers of liquorice. 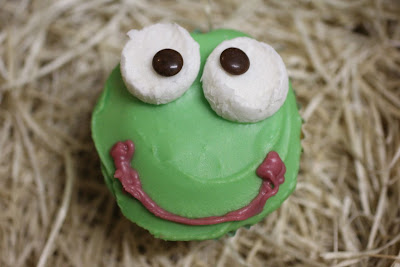 The one that I loved the most:
Decorations: marshmallows, brown mini m&ms, icing mouth

Sylvia asked for frogs and she got frogs.  I was quite pleased with my end result.  I had fun placing the eyes differently on each frog.  The cut marshmallows were sticky enough to have the m&ms stick without needing any icing to glue them on.  Yet again my piping was not great but it was close enough for jazz.  I did consider just making a mark of the mouth with a stick but I think the coloured mouth was better.

More on Sylvia's birthday soon.
Posted by Johanna GGG at 22:51