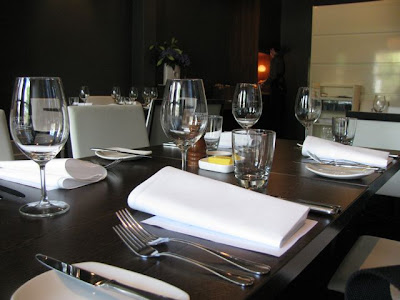 Yesterday we had a work Christmas lunch at the Hotel Lincoln. This is a pub where I have eaten a few times but not for a couple of years. It has enough vegetarian offerings to interest me and while it is a notch above traditional pub grub, it is relaxed enough to be able to sit back and enjoy dinner. So I am pleased to be able to blog about it.

I have mostly eaten in the front bar but yesterday we had a three course lunch in the restaurant. I arrived early and was glad to be able to sit and re-group. I had spent the morning with Sylvia and 10 other 2 year olds on an excursion to the Melbourne Museum. I didn't realise just how tiring that was until I sank into my chair at the Hotel Lincoln. 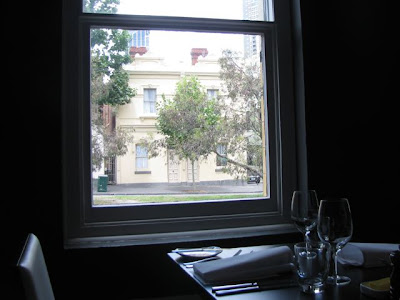 My colleagues arrived soon enough. It was all smoothly organised with dietary requirements sent to the kitchen beforehand and a Kris Kringle (or Secret Santa) present exchange. The presents brought us tears (the Leunig book) and laughter (the sticky notes with a tickbox for "I'd like to talk to you about the crap boss"), and a trip back to the office for a missing present! Fortunately we were able to amuse ourselves as the food was slow to come. 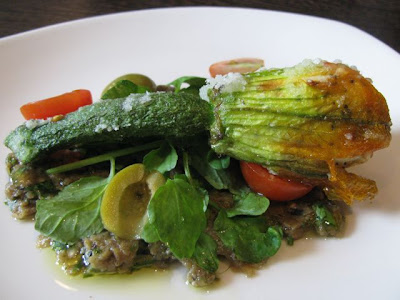 I started with Ricotta Stuffed Zucchini Flowers, Smoky Eggplant, and Olive. This was my favourite dish because the combination of flavours was a triumph. I haven't had zucchini flowers many times before so I was pleased to have the opportunity to try them again. The delicate zucchini and ricotta were nicely contrasted with a smoky eggplant puree, olives, salad leaves and cherry tomatoes. 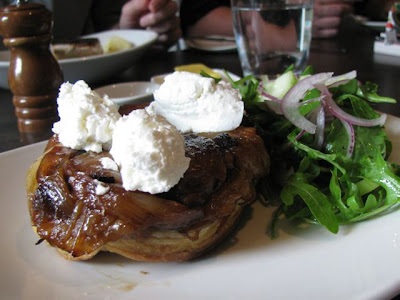 The main course was a Shallot Tarte Tatin with Goats Curd. Being vegetarian means a lack of choice when it comes to a set menu. Onions and goats cheese are not really my cup of tea. I gave a lot of the goats cheese to my colleagues and found the onion a bit too intense. I've had much worse but I was so full after this that it was difficult to find room for dessert. 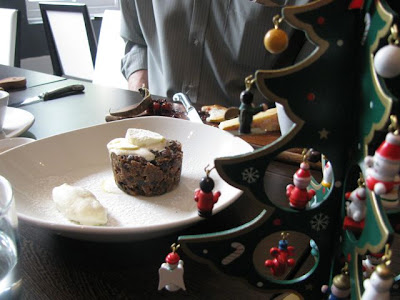 However, there was no way I was missing out on my Christmas Pudding with Brandy Butter. E and I spend much time discussing how restaurants and pubs just don't do proper Christmas dinners here like they do in the UK. So I appreciated that the Hotel Lincoln had made an effort to include some festive food in their menu. They didn't go as far as a Christmas tree. This one in the photo was brought along by my colleague, Penny, who loves Christmas!

The pudding was lovely with wonderfully flavoured brandy butter. I didn't even miss the custard that I would traditionally eat with pudding. Unfortunately the food was so slow to come out that about half the table had left by the time dessert arrived. Despite this, I enjoyed the meal and hope I will be back soon. 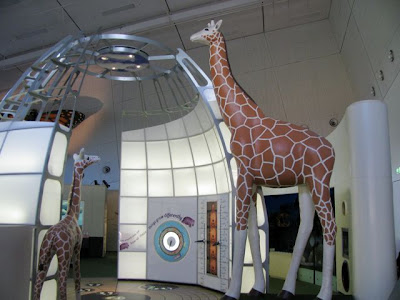 I will leave you with a photo of giraffes. A couple of years ago I shared my disappointment about the lack of giraffes in the Museum. It seems there are giraffes in the children's area but they are not the same as the stuffed ones that I remember from when I was a child. The museum has improved the taxidermied animal display and now has some fearsome expressions from lions and bears that didn't bother Sylvia at all. She was more interested in the koalas. I still hope for the return of the giraffes.