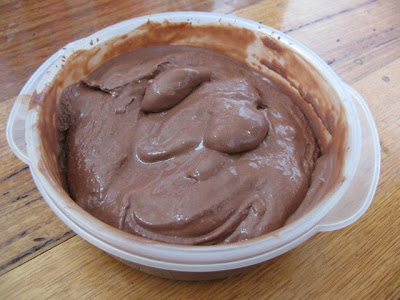 There are two reasons I am not keen on ice cream. For starters, so many recipes have too many eggs for my liking. The other reason is that my mum cooked dessert for us every night of my childhood (except after relaxed weekend meals) and on occasion she served us ice cream and fruit instead. So as children, we always thought ice cream was a very second rate dessert. Of course as an adult I have had some amazing ice creams but just can’t get excited enough about it to make it... 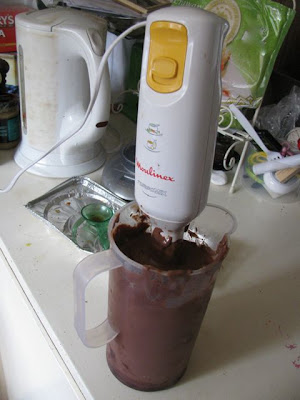 ...Until Cindy announced her vegan ice cream potluck. Even then, I toyed with the idea of making wafers or some other accompaniments. But I decided to grasp the nettle and searched the net for a simple ice cream recipe. I haven’t had lots of time and energy to trial ice cream making or to seek out recipe and odd ingredients. I was just happy not to have eggs in the equation. Hurrah for vegan ice cream!

After many ideas, I settled on chocolate ice cream. The recipe I used asked for vegan choc chips. I didn’t have time to look for these so I just used Lindt 70% chocolate, which I suspect is far more bitter than the choc chips in the recipe. I searched for tips for ice cream making without a machine and found helpful ideas from David Lebowitz and StoneSoup. 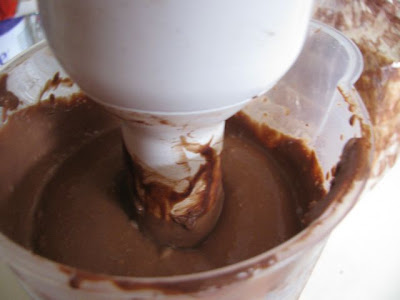 Lots of air and lots of sweetener seemed useful in keeping it creamy. Alcohol apparently slows down the freezing too but I wasn’t going there with booze buses out and about for Christmas. Hence my liberal use of the hand held blender, as noted in my take on the recipe below. I also had “little dolly” on hand to “taste” (“Taste” is a new favourite word of Sylvia’s). 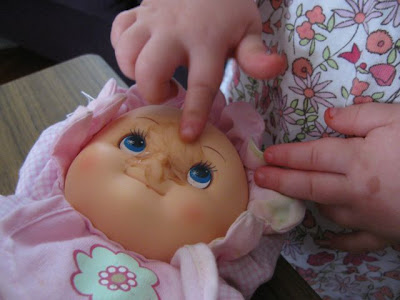 I set out for the potluck while Sylvia slept, feeling a sense of achievement that I had even managed to make some ice cream. Arriving at Cindy and Michael's home, I knew I was at the right place because it smelled as sweet as an ice cream parlour. Later I found that this was because Michael was making waffles. On the tables was a fascinating spread of ice cream, waffles, berries, cherries, sprinkles and even the glace cherries to finish off each serve. I was especially envious of Cindy’s ice cream scoop collection and realised I don’t even own one! 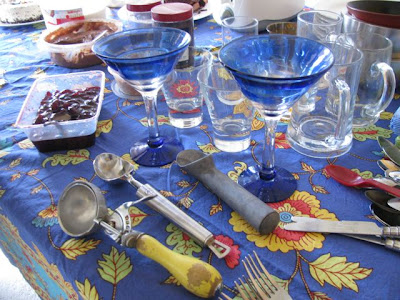 The ice cream that most amused and entertained me was Cindy’s Neapolitan ice cream because it looked just like the one we would eat as children with the blocks of chocolate, vanilla and strawberry. But one bite of the strawberry ice cream demonstrated the difference between Cindy’s fine ice cream made with real strawberries and the one of my child hood that I think was filled with colouring and flavours. I also enjoyed Kristy’s amazing chunky chocolate honeycomb ice cream cake, some peanut butter ice cream, a caramel ice cream and Veganator’s molasses vanilla ice cream with candied walnuts. It felt very decadent to spend an afternoon eating ice cream with waffles and berries. 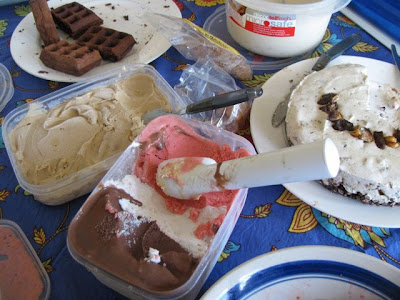 I confess I got to the stage where my ice cream started to melt together in my bowl so I got a bit confused about which flavour came from where. As usual I missed a few interesting ice creams too. I had a bit of my chocolate ice cream with the others and found it quite bitter compared to the sweeter ice creams. I am still a bit uncertain about making ice cream but it is quite exciting to have started experimenting. Thanks Cindy for opening up a window into a new world!

Previously on Green Gourmet Giraffe:
This time last year: Glögi by the tree
This time two years ago: Festive profiteroles with salad
This time three years ago: Christmas Snowflake Biscuits

Tofu Chocolate Ice Cream
adapted from VegWeb
makes about 3½ cups
I melted the chocolate in a tall plastic jug that I use for my hand held blender. I added the remaining ingredients and blended them together to make a smooth and creamy “custard”. Check for sweetness – this is quite bitter but I liked it that way.

The day of serving I took it from the freezer and let it soften enough to scoop it into a plastic container with a lid (I meant to leave it 15-20 minutes but got distracted and left it quite a bit longer). Then I blended it again and returned to the freezer to firm up a bit before serving (but I only had about 30 minutes to re-freeze it, then had it in the car and then put it in Cindy and Michael’s freezer for a bit but it was still really soft). It has lasted a week and a half and probably would last longer in the freezer.

On the stereo:
The collection: Pentangle