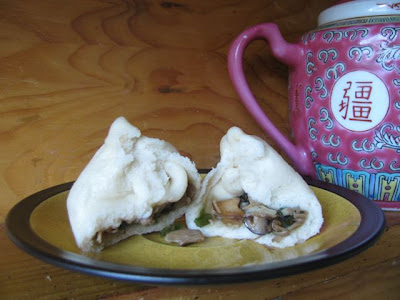 Last weekend I visited my friend Yarrow for an afternoon of cooking. We picked some recipes we wanted to try with the aim of having dinner at the end of our endeavours. Dinner had a somewhat Asian theme with steamed mushroom buns and tempeh and corn soup. But we were a little eclectic in our choices, with chocolate honeycomb for dessert and a batch of vegan bacon. 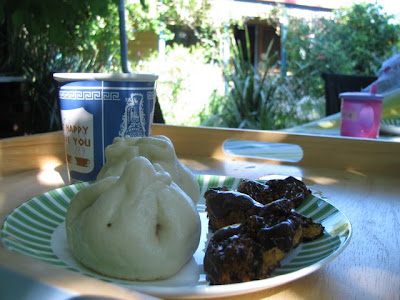 I always enjoy cooking with Yaz. It is easier to be brave trying new things with two in the kitchen. I must confess that I felt I didn't do as much of the cooking as I would have liked. I was too busy constantly keeping an eye on Sylvia, who loved jumping up and down on the coffee table and running outside at every opportunity. Yaz's partner, Mindy, helped with keeping an eye on Sylvia but my little one would disappear quickly. Yes, that is Sylvia in the photo of the garden below. 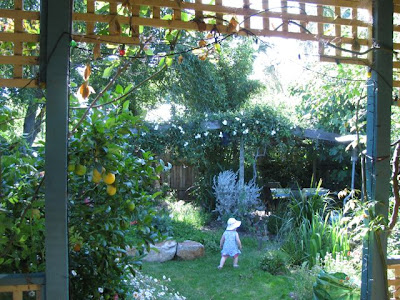 We stopped for afternoon tea to sample some sweet buns and chocolate honeycomb. It was a sunny afternoon and their garden is lush with all the rain we have had. We sat by the bamboo in a shady corner with a cuppa. The food was lovely but the mozzies enjoyed feasting on my legs and there were spilt drinks. Even better was dinner with fantastic soup and buns.

Vegan Bacon
This recipe for vegan bacon was my must-try dish. I have actually decided that it was so good that I must make this again soon. I will post more about it then to do it justice. Meanwhile you can find the recipe at the Ordinary Vegetarian. 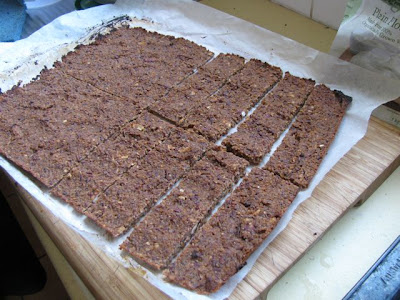 I can also tell you that it is one of my favourite discoveries this year. It is the first home made "facon" I have found that fries up to a pleasing crispness. I took home a tub of it and loved it in sandwiches and pasta dishes. Expect to hear more about it very soon. 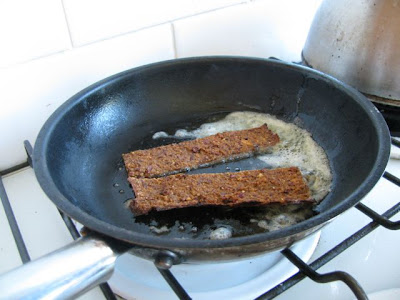 These steamed buns were chosen by Yaz. It is always nice to try yeasted goods with him. We had thought we might make pretzels too but ran out of time so I was pleased we had a bread of sorts. I would never have thought to try these but I would make them again. Having come to steaming late in life, I have learnt to appreciate how forgiving steaming is with timing. I didn't do much with these but if you have time, they are not too hard. 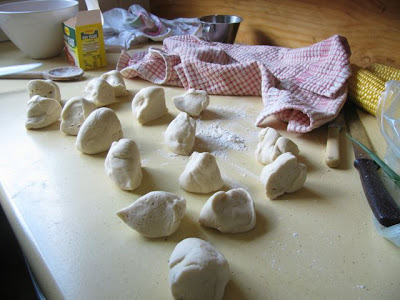 Yaz originally suggested making them with red bean paste as his recipe suggested but I have never learnt to appreciate sweet bean paste. (I have my limits even in shared cooking.) We compromised on a mushroom filling. In fact I wondered how vegan bacon would go in these.

We set aside a few buns and filled these with a range of sweet fillings - chocolate and honeycomb, raspberries and honey, jam and one other filling I can't remember. These were the buns we sampled at afternoon tea and they were fantastic, even though the honeycomb filling melted away. 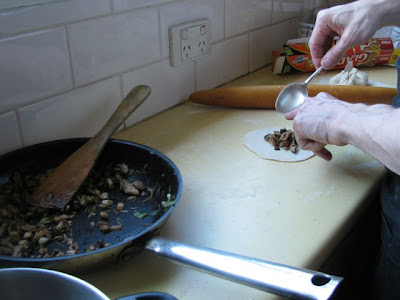 I bookmarked this tempeh and corn soup recipe a while back because I often would like a vegetarian version of chicken and sweetcorn soup in Asian restaurants. This is exactly what I wish was on offer. We were a bit slapdash with the recipe because just as we started cooking, Yaz's laptop refused to show the website. A few things were added late and we only had powdered not fresh ginger. But the recipe showed itself to be robust enough to handle our vagaries. 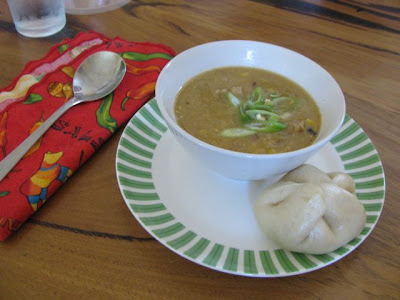 Before turning vegetarian, I often cooked casseroles with meat tossed in flour and fried before adding other ingredients. This was the method used by this recipe. It was strangely comforting in a nostalgic way. I am sure the meat used to stick to the pan just like the tempeh, though there is less fat released with tempeh so maybe we didn't have enough oil. I am not always that keen on tempeh but it was excellent in this recipe and I was in heaven with all the tinned creamed corn. It was fantastic accompanied by the steamed buns. Why can't Chinese restaurants serve such excellent vegetarian food? 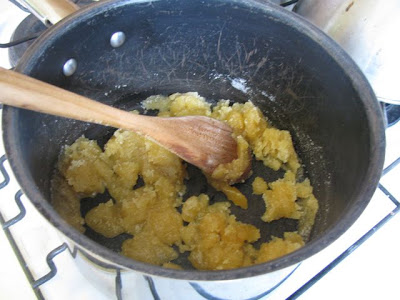 I was taken by Kristy's recent post on vegan crunchie. I must tell you that I am really a violet crumble girl. Not by choice but by heritage. You see, my dad loves them. So much that each Chrismas and birthday my older sister and I took it in turns to buy him violet crumble and pollywaffle. If you didn't grow up in Australia you might not know the difference. Violet crumbles are harder honey comb – it doesn’t melt in your mouth like Crunchie but Crunchie always tasted a little burnt to me. Yet I was intrigued by Kristy’s vegan version, especially as I love anything with golden syrup. 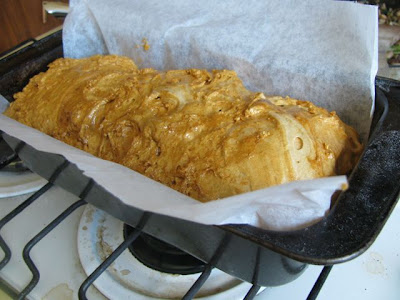 Our crunchie was not perfect. In fact it didn’t get very close to looking like crunchie or even violet crumble. Yaz has made honeycomb a few times before but had mixed results. We decided to use a loaf tin which in retrospect was a little small for our mixture. The mixture could have been cooked a little less than the recipe said. It was a little dark, though it rose amazingly, and then sank again as it cooled. But maybe if we just spread it on baking paper like I saw Nigella Lawson do on tv tonight, it might have been easier to deal with. 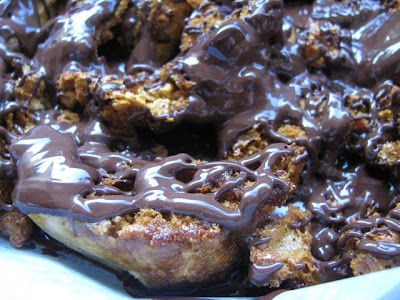 We drizzled the chocolate on chunks rather than smoothing it over a slab. I suspect the weather was more humid than is ideal (thanks for the tip Cindy). We didn’t even wait for the chocolate to set but it tasted wonderful fresh. In fact it was so good that it was hard to stop eating. 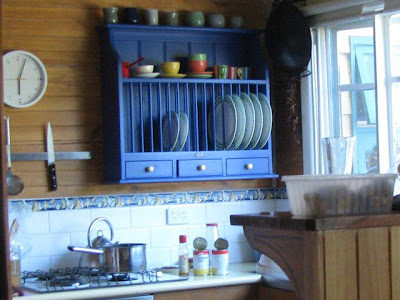 I was quite sad when we left because this will be my last cooking session with Yaz in his bright and cheerful kitchen. Who knows when we will cook together again as he and Mindy are setting off overseas at the end of the year to start a new adventure on the other side of the world. I am sure I will make some of these recipes again and remember enjoying them together with Yaz and Mindy.

Previously on Green Gourmet Giraffe:
This time last year: The Last Drop - cosy pub grub
This time two years ago: Lentil Loaf with Chutney
This time three years ago: Dahl for the Soul

Dough:
Filling:
To make filling: Yaz prepared the filling before I arrived but I think he just fried up some mushrooms and spring onions with a bit of seasoning. This could be made while the dough is rising if you wish.

To make dough: Mix together all ingredients and add an extra spoonful of water or two if the dough isn’t quite supple enough for stretching and shaping. Yax kneaded the dough for a minute, let it sit for 10 minutes, and repeated this 3 times rather than kneading for 10 minutes as suggested by the recipe. I can’t quite remember how much longer he let it sit for but the recipe suggested the dough rising for 45-60 minutes.

Cut the dough into 16 pieces and let rest. The recipe says 5 minutes but we let them sit quite a bit longer. Then use a rolling pin to roll each piece into flat circles of about 20cm diameter. Place a spoon of filling into the middle and pinch the edges together at the top. (If you want a smooth bun you can roll the ball to smooth the edges but we chose not to.)

Once shaped let the buns sit for 10 minutes. While they are sitting, heat the water for the steamer and line your steamer basket with baking paper to stop balls sticking to the basket. Place buns in steamer, cover and steam about 15 minutes. Serve warm. I kept some in the fridge overnight and steamed them for 15 minutes the next day.

Tempeh and Corn Soup
Adapted from Veggie Num Num via Vegematarian
Serves 4-6
Crumble the tempeh into chunks in a small bowl. Toss with cornflour so tempeh is well coated.

Heat oils in a large saucepan. You will need a decent glug or two. Add the onion (or leek) and celery and fry until soft. (We forgot to add the celery until later but I would add it around when I added the onion.) Add ginger and garlic and fry for 1-2 minutes.

Add tempeh and cornflour mixture. Cook over medium heat for about 4-5 minutes or til tempeh has started to turn golden brown. Our tempeh was all clumpy and seemed to take ages to brown and stuck to the bottom. Some firm stirring and a bit of stock to loosen the tempeh will help.

Add the vegetable stock, creamed corn and corn kernels. Bring to the boil and gently simmer for about 15 minutes or until soup has slightly thickened. Serve with spring onions and coriander if desired.

Update June 2014: made this and had to use 2 tins of corn kernels and 1 tin of creamed corn because that was all I had.  The texture was not quite right but it was rescued by adding some rice to the soup.

Vegan Crunchie
from In the Mood for Noodles (using an allrecipes.com honeycomb recipe)
makes lots
Line a cake or slice tin with baking paper. We used a loaf tin which was probably too small but Kristy said her 20cm square tin was too big.

Gently heat the golden syrup and sugar together until the sugary clumps become liquid. Bring to a boil and then simmer on low heat for 5-10 minutes (or even less – ours was a bit overcooked and we just did 5 minutes – apparently dropping a little syrup into water will help to show it is done if it becomes brittle.)

Remove pot from the heat and quickly mix in the bicarb of soda. It will foam up instantly. Pour into prepared tin and let it set (I think this took a few hours – NB apparently it sets better if the weather is dry rather than humid).

Ideally you are meant to let it set and then chop it up but we started to eat it before it was set and by the next day there was bloom on the chocolate. Not perfect but still delicious.

On the Stereo:
Original masters: Steeleye Span
Posted by Johanna GGG at 22:33