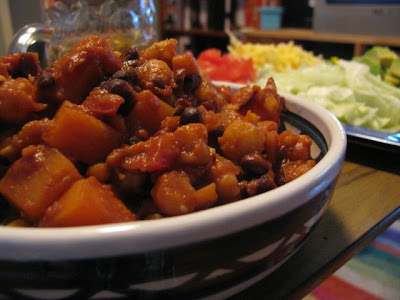 I was intrigued when I saw Tanna cooking a Hominy Tomatillo Stuffed Pumpkin back in 2008. It wasn’t the first time I had heard of hominy but it was the first time I had seen it up close and in such a beautiful recipe. Tanna kindly responded to my curiosity with helpful information. 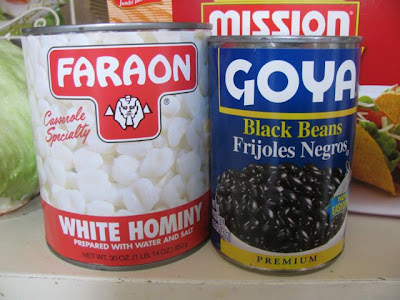 I have been meaning to try it for ages. Then, when I was rushing past Casa Iberica (in Johnston Street, Fitzroy) recently, I nipped in and bought some cans of hominy and black beans. Then I felt curious but clueless. What to do with this strange mutant corn that has been dried and soaked in lye! Last week E asked for tacos so I decided to toss both tins into a batch of chilli non carne. This is something I used to make regularly but doesn’t get made nearly so often since I started blogging. 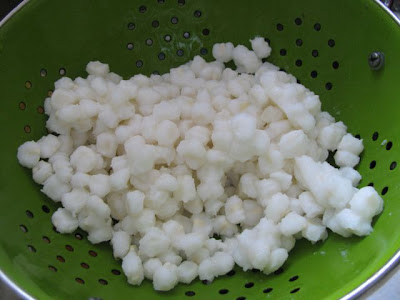 I bought all the vegies at the Vic Market yesterday where I had the pleasure of meeting fellow blogger Hannah. She was as lovely in person as she is on her blog and was patient as I searched in vain for tortillas (actually we had fun looking at all the corn chips and crackers in the organics area). Luckily when I asked E for help he was able to find some in a supermarket near his workplace. The scene was set.

I made the chilli non carne last night while Sylvia ate her dinner. We decided to wait until she had gone to bed so we could spread out the taco fillings on a platter and eat in peace. It made me wonder why I don’t do tacos more often. They are so delicious! 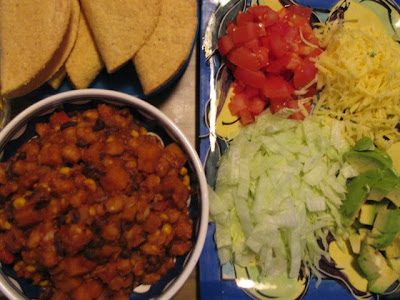 The hominy was an interesting addition. It looks so fluffy but was actually quite dry and chewy and it confused the senses by tasting of corn the way that corn chips do but it just didn’t look at all corny. Well maybe it looks a little like popcorn but I rarely eat it. I realised that it was a three corn taco with corn kernels, corn taco shells and hominy. Nothing wrong with that.

Most bizarrely, today when we had some for lunch, I found that Sylvia loved it. She wont touch most of the stews I make so I was amazed she kept asking for pieces of hominy in the spicy sauce. The only explanation I could think of was that it is about the same size as chickpeas. Though children eat in mysterious ways so I am prepared to believe there is some reason I will never ever know. 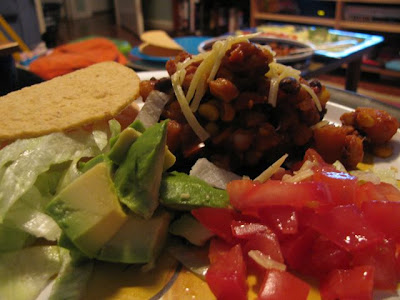 I will look out for hominy to cook with again, especially given Sylvia’s enjoyment of it. However, I suspect there are few, if any, places in Melbourne other than Casa Iberica where it is sold. If hominy was easier and cheaper to buy I would definitely use it more often in chilli non carne, probably more for the interesting texture than the flavour. I’d also love to try using it in stews and casseroles and even, if I felt adventurous, in Tanna’s stuffed pumpkin.

Previously on Green Gourmet Giraffe:
This time last year: Christening Cake
This time two years ago: St Andrew’s Day Haggis
This time three years ago: How green was my mole?

Heat oil in a large saucepan over low heat. Cook onion and carrot for about 10 minutes until softened. Add corn, capsicum, sweet potato and cumin. Cook a further few minutes. Add water, tomatoes, tomato paste, smoked paprika, chilli, hominy and promite. Bring to the boil and simmer for about 30 minutes either until the stew starts to stick to the bottom of the pan or until vegetables are soft. I turned mine off and let it sit before serving.

I served mine with tacos warmed in the oven for about 5 minutes at 180 C and a platter of salad to eat with it.

On the stereo:
Everybody else is doing it, so why can’t we?: The Cranberries
Posted by Johanna GGG at 23:02