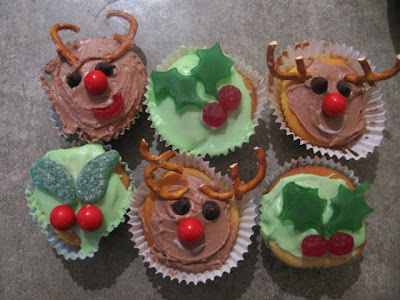 On the weekend I went to my mum’s and fulfilled my promise to my niece Maddy to do some cake decorating with her. Ill health had kept me from helping to make her birthday cake a few weeks back so we did the next best thing and made Christmas in July Cupcakes.

First I had to explain the idea of Christmas in July to my nieces. Many Australians will find themselves in the Northern Hemisphere at Christmas and miss the sun, the barbecues and the beach. I have never had that sort of Christmas and love the idea of celebrating Christmas at a time of year when it is cold enough to need a festive dinner of hog’s head and plum pudding.

Cupcakes might not be traditional Christmas fare but they are perfect for some easy decoration with kids. My mum had made some gluten free cupcakes for us to ice. These are very popular in my family. Other vanilla recipes such as small cakes that I grew up making or these excellent hot milk cupcakes would have also been fine. My preference, however, would be a chocolate cupcake such as these choc honey muffins (if we don’t quibble over differences between cupcakes and muffins). 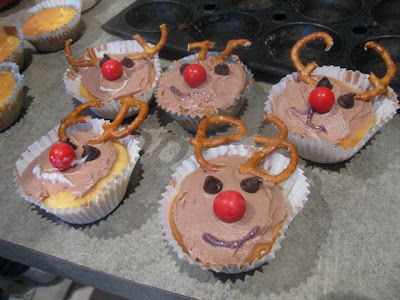 I was inspired by Cindy to make some Reindeer Cupcakes. Maddy and Quin were in charge of these. They had the bowl of light brown icing, coloured with cocoa, some jaffas for noses, choc chips for eyes, pretzels to break into horns and we found some old tubes of glitter icing for the mouths. The girls had fun with drawing different expressions on the mouths.

I wanted to make sure that Grace didn’t miss out of the cupcakes so I thought we could also do some GF holly cupcakes. I know we could have piped icing on or cut out coloured fondant but I retain a childhood fascination for decorations with lollies (sweets in you are in the UK or candies if you are in Northern America). I had a special trip to source the right lollies at the Yummy Mummy Lolly Shop 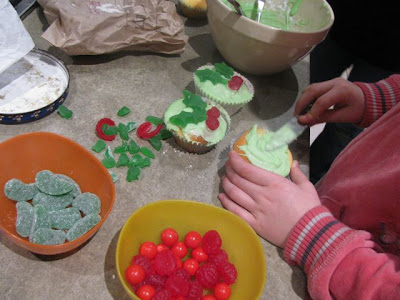 Grace and Ella were in charge of the Holly Cupcakes, which took a bit more experimentation. They decided on some light green icing. At the lolly shop I found some green gummy frogs, mint leaves, raspberry jubes, as well as the jaffas. The gummy frogs were best for cutting out holly leaves though I liked the look of the mint leaves too. We also cut the raspberries into smaller berries for the holly. The jaffas were ok as berries but are not gf. Ella was not well but cheered up at the cake decorating.

We stayed overnight at my parents so they could look after Sylvia (with a lot of help from my sister Susie and her girls) while we went to the cinema to see Inception. It was an intense, immense and thought provoking film. More car chases, guns and explosions than I care to see, but lots of intriguing ideas and breathtaking landscapes. It required constant attention to follow a complicated plot so I was glad we went to the earlier session. 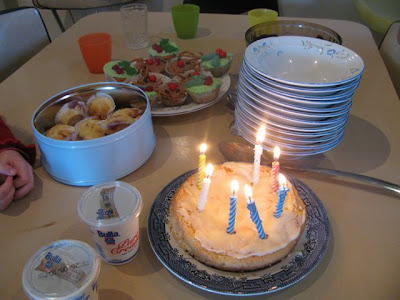 The next day we had a birthday dinner for my brother Andy. After the tacos, the table was spread with mum’s chocolate pudding and sponge birthday, Fran’s fruity cupcakes and the Christmas in July cupcakes. I think the girls would have preferred to eat the icing and lollies off the decorated cupcakes. Maddy was disappointed that the pretzels had softened overnight. Sylvia loved poking her finger into the cupcakes and licking it. I just preferred the chocolate pudding and sponge cake. 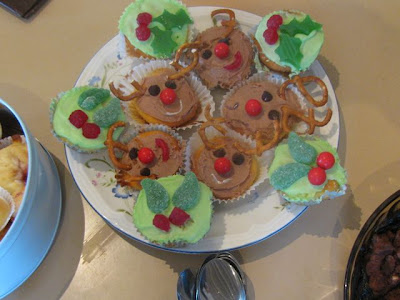 It was a lovely afternoon with the family. The boys went off to play golf after lunch and the girls sat around cuddling Andy and Erica’s new baby Ashton. I was fascinated by how much the nieces loved Masterchef. We left with a leek, brie and pumpkin tart and a chickpea curry that my mum had made. 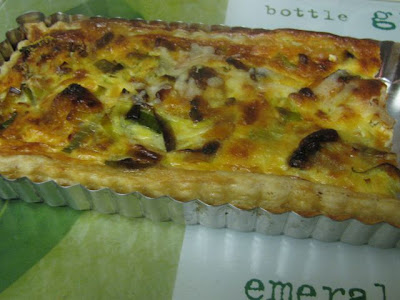 I will leave you with my quote of the weekend which comes from Grace when telling me about how much she loved her pancake breakfast on Sunday morning: “If the world was a pancake, I would eat it all.”

On the Stereo:
The Strange Tale of Captain Shannon and the Hunchback from Gigha: Bread Love and Dreams