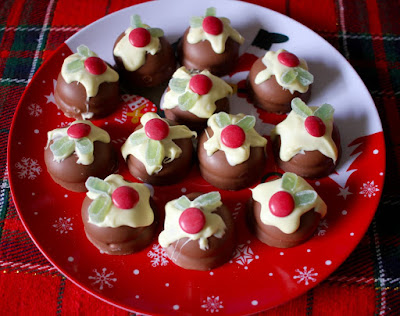 In a haze of nostalgia I recently bought a packet of Chocolate Royals, now known as Royals.  (Why they have changed the name, I cannot fathom!  The biscuit and marshmallow are still covered chocolate.)  So when the idea for making Chocolate Royal Christmas Puddings popped up on Pinterest, Sylvia decided she would make these for our Christmas in July lunch. 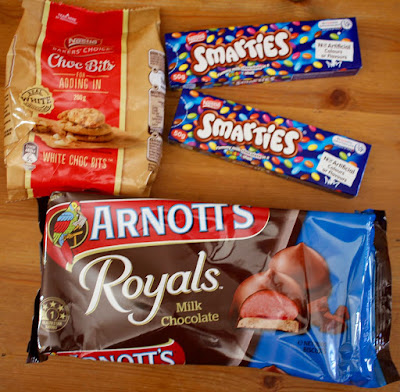 It is a pretty simple idea.  Some of the recipes I have seen use Jaffas.  As the last bag of jaffas I bought sat in the cupboard so long that I think we threw them out, I decided to follow the ones that uses Smarties.  However the red Smarties were a disappointingly insipid hue.  (Whatever happened to the fun of the advertising jingle that asked "do you eat the red ones last"?)  Though not quite as dull as the spearmint leaves.  While I am moaning about the names of chocolate biscuits, and the colours of Smarties, has anyone noticed that the main brands in the supermarket don't seem to make spearmint leaves? 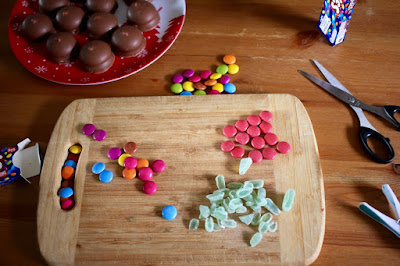 We bought two 50g boxes of Smarties.  Sylvia enjoyed sorting out the red ones while I cut up spearmint leaves.  Then she measured and melted the white chocolate as she was determined to do it all herself. 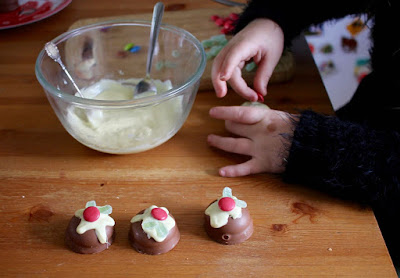 The most challenging part was getting the chocolate drizzle right to look like custard on a pudding.  Sylvia did it with a teaspoon but I have seen online that some people do it with a piping bag.  Other than that this was a really easy idea.  In fact it could be done with other round chocolate covered treats such as Tunnocks Tea Cakes or truffles or cake pops. 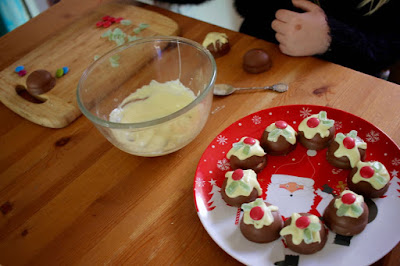 When the little puddings were finished Sylvia arranged them on the plate with the gingerbread and berries and strategically placed them next to the kids' table. 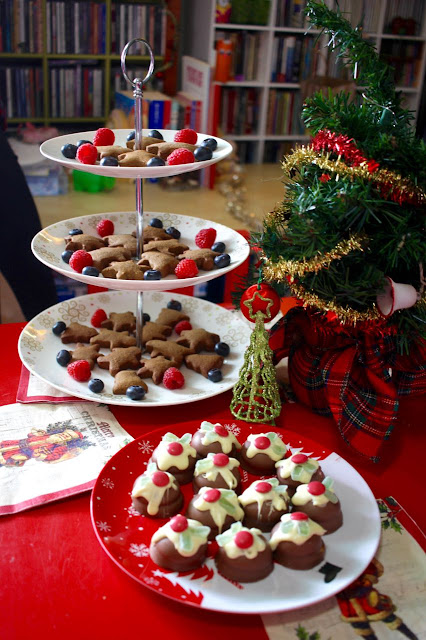 I served the kids their pizza first and then they were onto dessert while we were still eating our main meal.  Sylvia was itching to pass the puddings around to the other kids.  Kudos to her for having enough self-discipline to wait until then to try one herself. 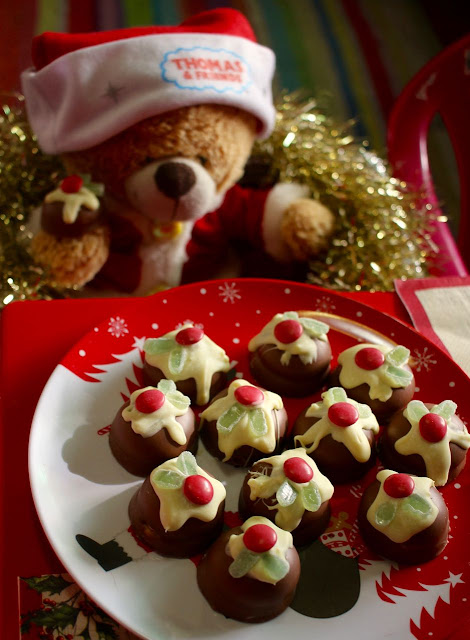 I am not a huge fan of Chocolate Royals so I was not wowed by these.  They were a fun festive dessert that was simple enough for Sylvia to make with very little help.  However I can't see these being a regular festive treat.  But I would not be surprised if Sylvia finds an urgent reason to make them again.  After all, they were enjoyed by Mr Cuddles so he might be requesting them at his teddy bears Christmas party.

Melt white chocolate for about 45 seconds in the microwave and stir well.  If a few chocolate chips are not quite melted, heat another 15 second intervals and stir well again.  (And repeat the 15 seconds if needed.)

Drizzle or pipe white chocolate over each royal so it looks like custard on a pudding.  While white chocolate still soft, press a red smartie on top and two little slivers of mint leaves on the side of the smartie.  Let chocolate set (you may need a fridge if you do this in a warm Aussie Christmas).

On the Stereo:
The Best Aussie Christmas
Posted by Johanna GGG at 20:43