It was Open House Melbourne on the weekend and I was able to visit five places this year over two days: Arlington Primary School and Kindergarten, Preshil; Mandeville Hall; Victorian Artists Society, Newman College at The University of Melbourne; and the Kathleen Syme Library and Community Centre. As always there was some amazing insights into the Melbourne that I don't usually see. 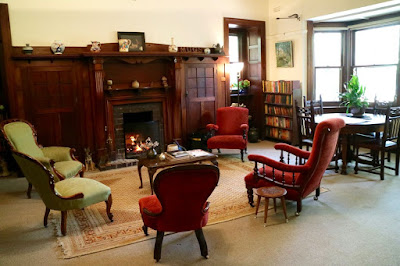 Arlington Primary School and Kindergarten, Preshil, Kew
I was curious about this progressive school because the blurb described it as being child-led architecture.  So I was surprised to enter and see an elegant olde worlde drawing room with shelves of old books and an open fire.  Apparently this was part of the old house from when the school was founded in the 1930s. 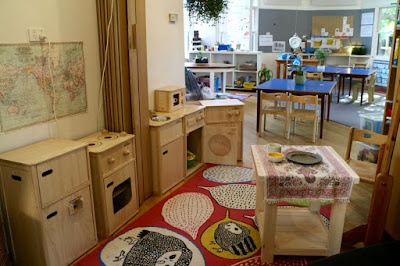 Most of the architecture dates from the 1970s.  There are lots of wooden toys and blocks and furniture.  Sylvia loved the pet turtles.  I was fascinated by the blue tongue lizards. 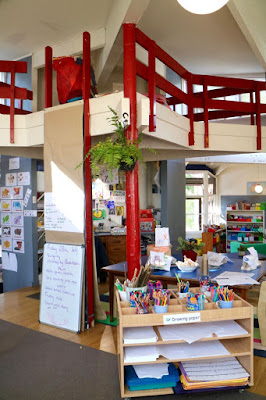 Most fascinating perhaps was the little raised platform with the red rails.  One of the teachers at the Open Day had attended the school as a kid and said they loved to sit on the platform and along the beams over the classroom.  But over the last 18 months it has been shut up by health and safety officers. 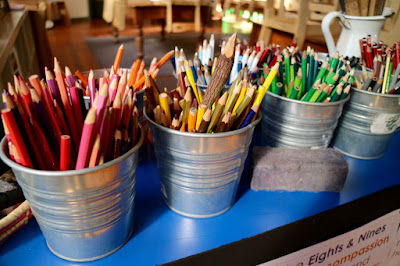 It was interesting to walk through the classrooms that are quite different to Sylvia's.  My parents and E spent a bit of time looking at the library. 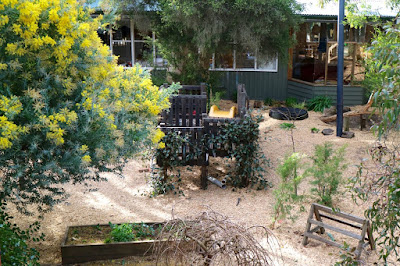 Sylvia and I were otherwise engages in the playground.  She could have stayed here all day.  There were lots of fun wooden structures to climb and quite a few classrooms were raised with places to play and learn underneath them.  The double story cubby house was a favourite with Sylvia. 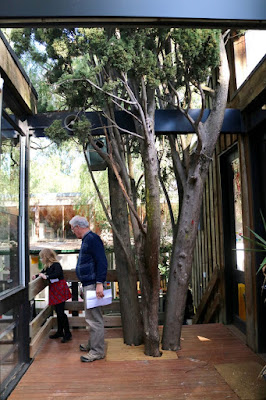 This walkway was called the tree house for obvious reasons. 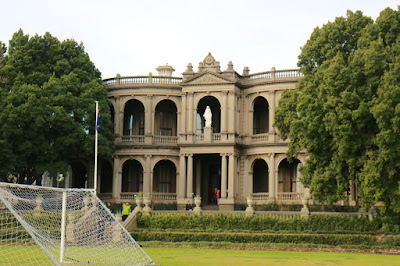 Mandeville Hall, Toorak
This is a girls Catholic school run by the Loreto nuns.  The original hall is a nineteenth century mansion and this is the part of the school open to us.  I confess to running after small child and not having much time to focus on the history of the building. 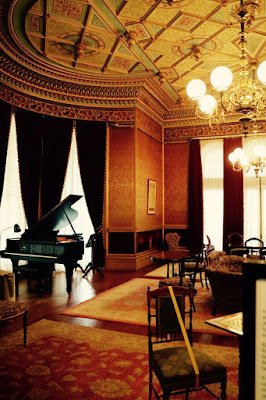 The rooms were very impressive in their finery that was typical of a goldrush mansion. 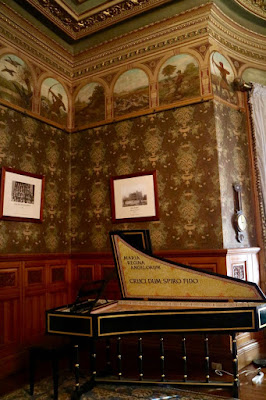 You might notice a few musical instruments like the harpsichord above.  This building is where music lessons are held and these rooms are used for recitals.  I never had a music room like this when I was at school, 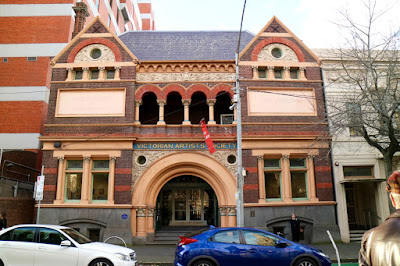 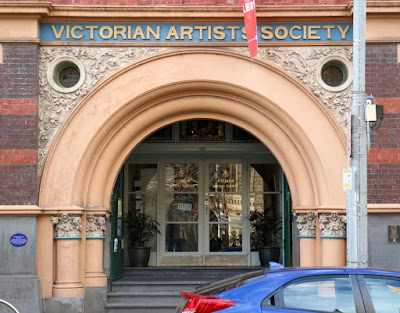 Inside the building is equally impressive.  It is a place of exhibitions, workshops and classes.  The artwork on the walls was enjoyable to look at.  I quite liked some of the still life paintings and one or two of the landscapes. 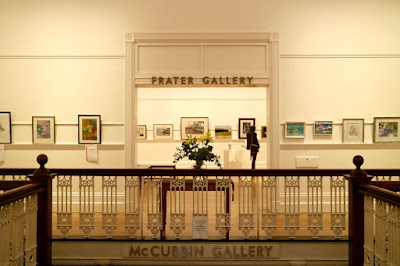 Photos were displayed to show how the gallery used to look.  But my favourite photo was of Frederick McCubbin, an iconic early twenthieth century Australian artist, dressed as Hamlet for the artists ball.  The building is in fundraising mode so I guess McCubbin is there to tug at the heartstrings. 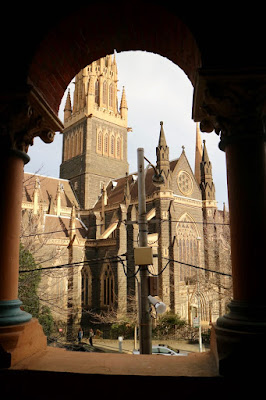 A walk out onto the balcony gave a fine view of St Patrick's Cathedral across the road. And that was as much as I saw on Saturday afternoon with my parents, E and Sylvia before we ended the afternoon in a cafe on Brunswick St.

Open House Melbourne requires great planning.  So many interesting buildings but it is a tyranny of choice, and a matter of mapping times and locations.  This has been made even harder because now a lot of the popular buildings require booking.  I looked at booking some of these on the day after bookings opened and many were already booked out. 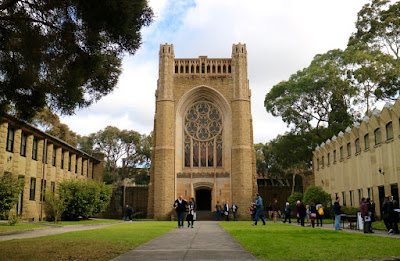 Newman College at The University of Melbourne, Parkville
One of the buildings that interested me and required a booking was Newman College. I snaffled one of the last tickets for tours for the Sunday morning.  The tour was taken by an architectural historian.  It was great to see some of the beautiful architecture by Walter Burley Griffin from the early twentieth century and hear of his fine design.  But I really would have preferred more social history. 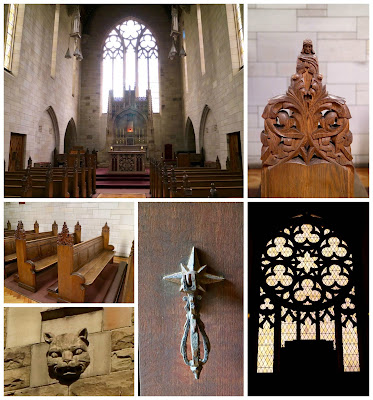 I have been to Newman many years ago when I knew people who lived at this Catholic residential college and even for a wedding in the chapel.  It is so long ago that I needed a refresher.  We started at the chapel.  It is built in the style of Kings College Cambridge in the 1930s.  It is a grand yet stark gothic building. 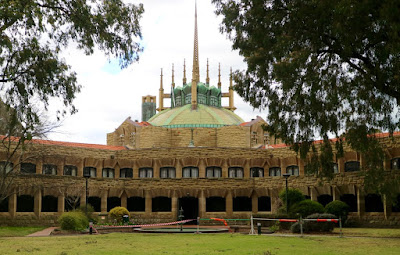 The focus of Walter Burley Griffin's design is the splendid domed dining room with wings of residential rooms spreading out either side.  (Apparently they meant to be continue into a full square but lack of funds in the interwar years made this impractical.  New dorms have been built to form a quadrangle since then.) 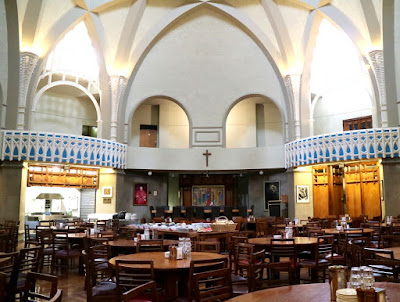 The height of the dining hall is magnificent and cathedral-like.  However I got a bit tired of the architectural details and started talking to some students about which rooms are most desirable, whether they still wear academic gowns to dinner (yes) and drink as much as in my student days (no). 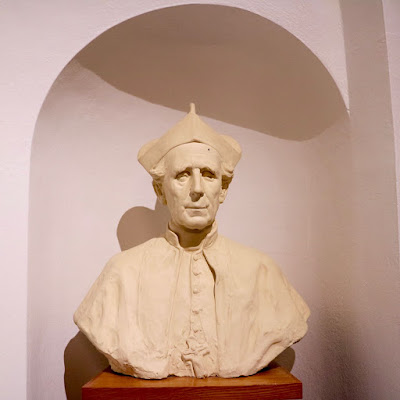 I could not resist a photo of Archbishop Mannix.  He was an influential public figure in Melbourne history.  I think of him as quite stern but this bust portrays him as a softer soul.  He officially opened the college in 1918. 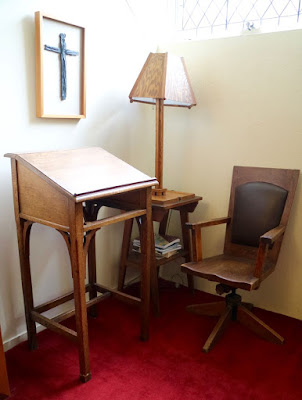 When the college opened with 56 residents, each had 2 rooms.  The furniture above is an example of that which was used in college rooms back in 1918.  We did not see inside the rooms but now everyone gets only one room each and I believe the furniture is far more modern. 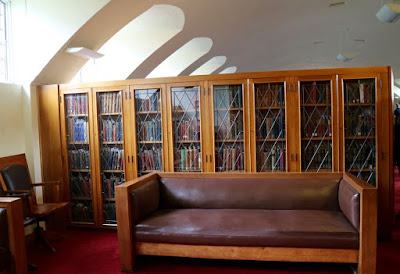 These lovely old bookcases are in the entrance to the Oratory, a barrel rooved room that seems to be used for lectures.  I had lost interest in the tour by then.  I went on to see the modern Allan and Maria Myers Academic Centre that is shared with St Mary's.  This 2004 building is functional but lacks the impressive design of some of the modern buildings around the University. 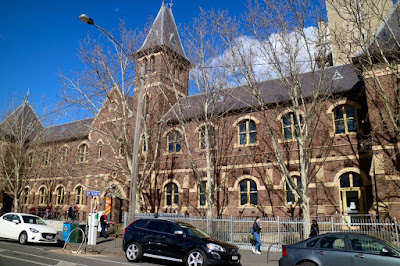 Kathleen Syme Library and Community Centre, Carlton
As I was close by, I went to check out the Kathleen Syme library and community centre that opened in 2015.  The building had originally been built in the 1870s as the Faraday Street State School.  I have been curious to have a look inside since its reopening 2 years ago. 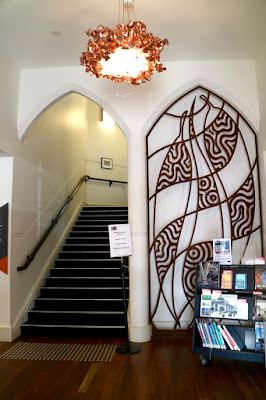 Open House Melbourne often means a bit more information about a building but some places such as the Kathleen Syme seem to just be business as usual.  In fact I had to check with staff if it was participating in Open House.  Some history and a map was on a little table. 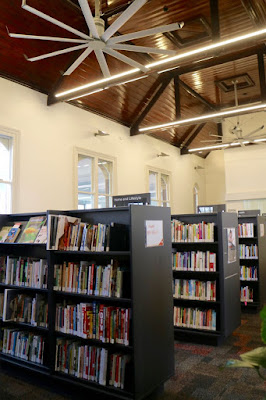 I enjoyed seeing the fine design that incorporated some modern touches, such as the Chargebar to recharge mobile phones. alongside historic features such as the high wooden roof that you can glimpse in the above photo.  It was good to finally peek inside but there was no sense of seeing inside a place that is usually closed to the public which is one of the thrills of Open House Melbourne. 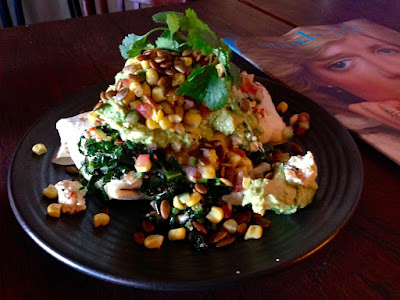 Then I had to go to the Little Bookroom in Nicholson Street, North Carlton.  While in the neighbourhood, I checked out A Fan's Notes.  I have heard good things about their vegan food.  It is refreshing to see a brunch menu that is not just eggs, eggs and more eggs.  I had a huge black bean burrito with avocado cream, corn and seed salsa, kale and scrambled tofu.  I really enjoyed it but it was quite salty.  And huge.  I hope I might get back there some time and write about the place more.

Meanwhile I really enjoyed Open House Melbourne.  As always I wished I could visit more places.  However the ones I saw were a great peeks into some Melbourne icons that gave some insight into the rich history of our city.  I have listed past Open House visits in this index.
Posted by Johanna GGG at 23:52