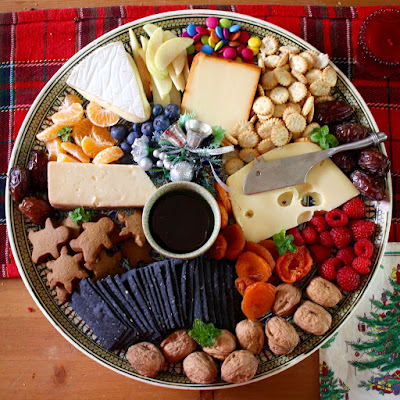 Today we had a most enjoyable Christmas in July lunch with friends.  It might have been sunny enough for the kids to run about outside but it was chilly enough to enjoy mulled wine, apples stuffed with nut roast, oven bakes and a splendid dessert cheese platter.  We celebrate in our Southern Hemisphere midwinter as Christmas was intended but I also thought today that it is luxury to create a festive meal that we struggle to find time for in December. 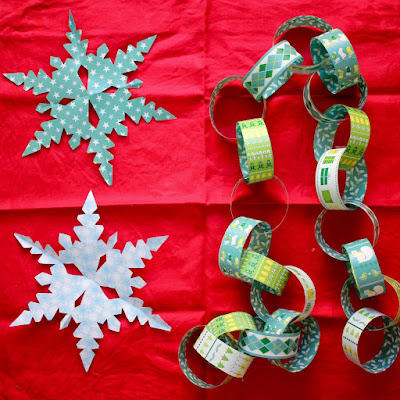 Last Christmas we bought an Usborne book called Christmas Decorations to Cut Fold and Stick.  It had such lovely papers as well as easy ways to make decorations.  We bought it late in the festive season and never found time to use it.  Sylvia and I had had some fun making snowflakes and paper chains to decorate the house.  We also dug out some tinsel and decorations including the wreath on the front door. 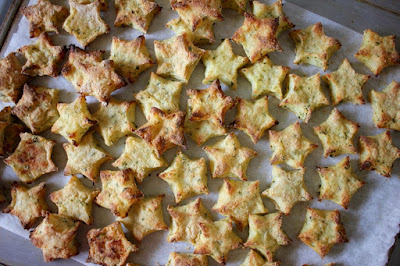 Yesterday, I spent a lot of the day cooking and cleaning.  These potato and parsley stars first appeared on my blog many years ago and were excellent.  I added a slurp of truffle oil to the mashed potatoes before cutting and baking as stars.  They reheated well too.  Sylvia took quite a liking to them.  In fact I think she liked them more than the candy cane pizza that I made for the children. 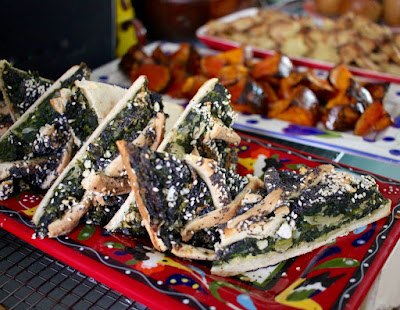 On of my biggest challenges in preparing the meal is that my oven timer seems to have died.  The pizza was over baked.  Some of the gingerbread was cooked through to crunchy rather than a soft texture.  It took a while to realise what was happening and by that time, I was well into the meal.  Fortunately, nothing was cooked so badly it was inedible. 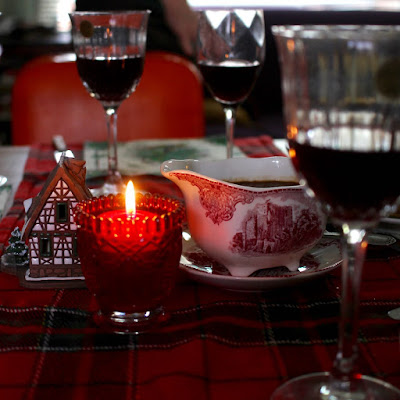 As well as potato and parsley stars, I made nut roast stuffed apples, gravy and roast pumpkin.  I had thought about cooking some brussels sprouts but ran out of time, much to the delight of one of our guests.  They brought along some spinach slice that went down very well.  Another friend brought mulled wine and Baileys to drink which are the perfect midwinter drinks. 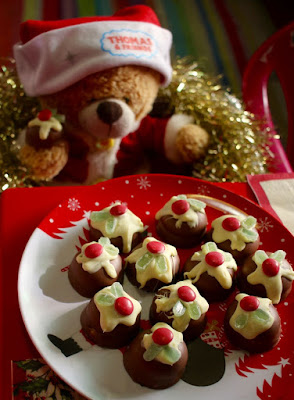 Sylvia made some Christmas Royals for dessert.  She found them on my Pinterest board and decided she must make them.  I will write more about these soon.  But you can see that Mr Cuddles enjoyed one.  Sylvia had a lovely - albeit noisy - time with her friends.  At one time the conversation with the adults had a lull and I suddenly heard a child yell "Ana will kill Peppa Pig".  Best not to ask!  After dinner we sent them out to the front yard to run off some of their sillies.

Meanwhile I had more ambitious plans for dessert.  We went to the Queen Victoria Market on Friday and I was tempted by some fancy cheeses and charcoal lavosh crackers.  Who could resist!  After seeing a few amazing platters online (just search "platters" on Pinterest) I decided I would combine dessert and cheese into a platter. 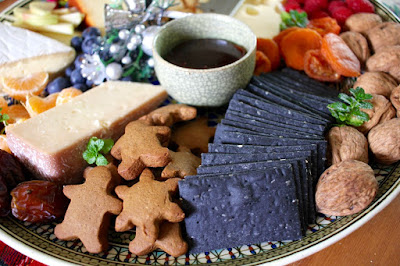 The dessert element was the little gingerbread biscuits that I make quite often.  Also included on the platter was raspberry cheese, smoked cheese, brie, swiss cheese, mini crackers, charcoal lavosh crackers, walnuts in shells, smarties, quince paste, medjool dates, dried apricots, mandarin, raspberries, blueberries, and apples (later replaced by pear).  I had dreamed I would have time to make a creamy chocolate dip that that never happened.  I tried to keep it seasonal but berries are too pretty not to include.

I really enjoyed this sort of dessert.  It looked impressive and was really enjoyable with mulled wine and/or Baileys.  I think you could add a few vegies and make it into a complete meal.  As a host of the meal, it was really easy to serve.  No bowls or spoons.  I could sit and chat without rushing around heating up and preparing food.  For all of us it was a very relaxed way to eat dessert.  Everyone could take as much as they liked. 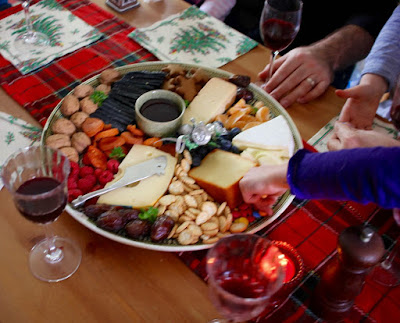 I decided to cover it with clingwrap for fear that little hungry fingers would start chipping away at it before dinner was served and dessert would look worse for wear.  It was just as well because Sylvia and her friends decided that as soon as the clingwrap was taken off they would "charge".  Indeed, as soon as it was served, a friendship of hands were in the platter.  Later when they were hungry they could come back for more nibbles.  The main change I would make if doing more platters would be to use a lazy susan so we could swivel the platter around easily.

Before we knew it everyone had helped with the dishes and headed home.  We were left to remove the wigs that had found their way to hang from the ceiling of the car port and then lie on the couch groaning at our full bellies.  I'll return with some recipes from the dinner soon.

I am sending this to Brilliant Blog Posts.

This platter really needs no ingredient list or method as it is really a matter of using what you have about.  A good balance of soft, crunchy, savoury, sweet is important.  Here is what I had on my platter:

On the Stereo:
White Christmas: Bing Crosby
Posted by Johanna GGG at 22:46